The scenic view over Bled seems to appear in every Slovenian travel guide. It’s no wonder, since Lake Bled is truly like a painting with its turquoise, crystal clear waters embraced by the Alps. A picturesque church on Bled island and a castle overseeing the valley from high above add to the beauty of the area.

A track around Lake Bled is perfect for a brisk hike. The good-conditioned route with a perfect view and visibility to the lake is 6 kilometers long and takes up to a couple of hours to complete.

There are plenty of good reasons to visit Bled. Relax in romantic alpine scenery, spend an active holiday or enjoy the rest of the vast possibilities the beautiful valley has to offer. 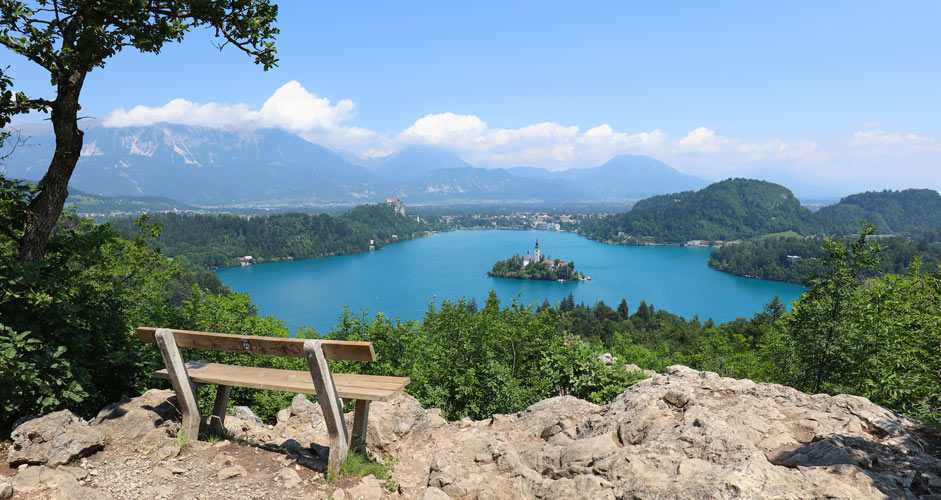 Most hotels are situated east of Lake Bled, where also the village of Bled, paid swimming pools as well as most shops and restaurants are to be found.

The best locations for a free swim are by the camping area southwest of the lake. If your main intentions are swimming and sunbathing, you might want to consider that area for accommodation, too. Otherwise, Bled Village near the lake is the most convenient choice.

Things to do around Lake Bled 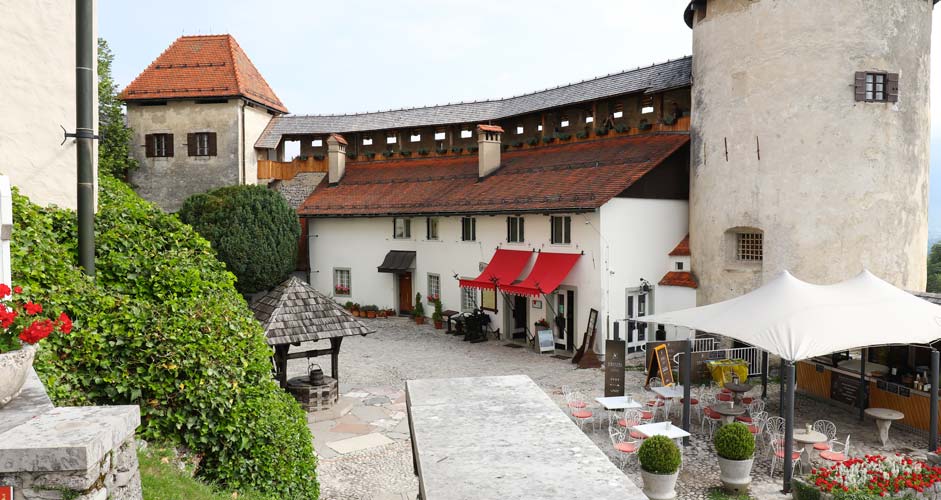 Lower courtyard of the castle

The relatively small Bled Castle, standing on the top of a cliff, is divided into two levels. This brochure contains everything you need to know about visiting the castle. The castle is not far away, but you’re in for a pretty steep climb. Depending on the route, there’s plenty of stairs along the way.

The admission fee is 13 Euros for adults, there are no free areas. 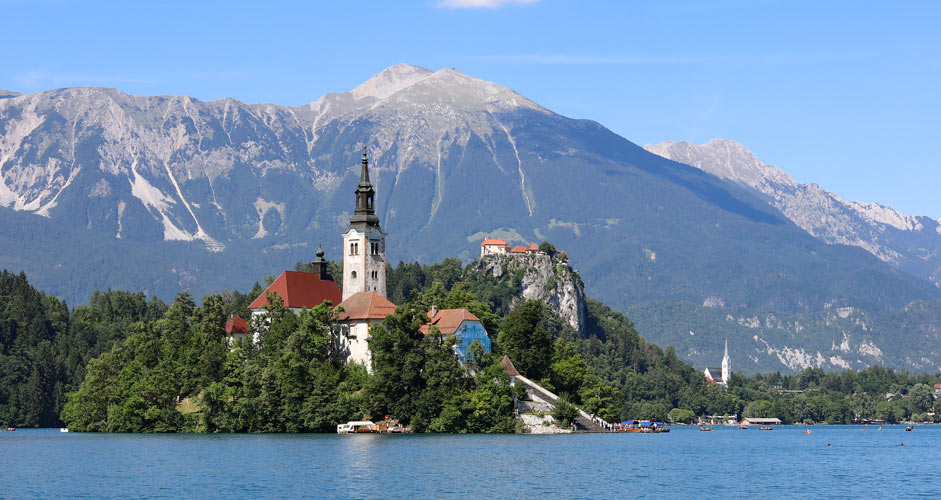 Bled Island in the front, the castle in the background

The most famous attraction in Bled is definitely the picturesque Church of the Mother of God standing on Bled Island, the only island of the lake. There’re a few other buildings on the island as well.

The easiest way to get to the island and back is with Pletna boats. There are several points of departure around the lake. A small pebble beach on the southwestern part of the lake

Around Lake Bled, there are numerous good places to go swimming, but the shoreline doesn’t contain actual beaches. The closest thing to a beach is a small pebble beach southwest of the lake. The grassy area surrounding it is very popular among sunbathers. Nearby, there’s a pier to go swimming conveniently. The aforementioned pebble beach is shown in the background of the picture.

Underneath the castle, north of the lake, there’s a paid swimming facility with plenty of services. More information: Public Lido

Check here for the list of dozens of different sporting activities on the lake and its surroundings.

Since motorized vehicles are forbidden, the lake is well-suited for slower and more quiet activities. 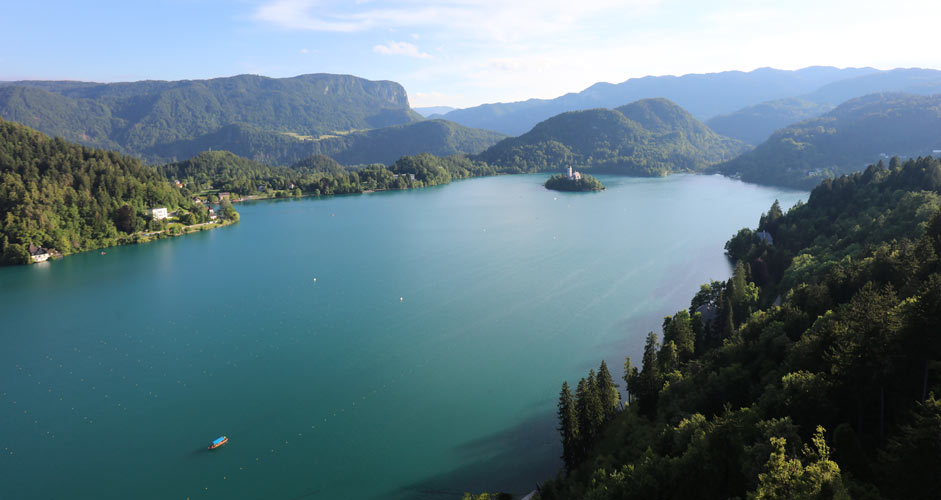 View to the lake from Bled Castle

Obviously, there’re plenty of viewing places around Lake Bled, but three of them stand out.

The path to the latter ones starts at the road on the southwestern side of the lake (by the picture tag 11) and continues through a forest. On the crossing, there’s a signpost to Ojstrica and Osojnica.

The walking route varies from easy to a steep climb especially when approaching Ojstrica.

After 10 minutes on foot, following the crossing in the previous picture, there’s another sign pointing Ojstrica to the right and Mala Osojnica straight on. At this stage, Ojstrica is already close but a steep climb away. Of the two viewing places, Ojstrica is more popular and thus crowded at times.

Mala Osojnica is situated higher up, but the road is not as steep. As such, Mala Osojnica may feel easier than Ojstrica to reach on foot. 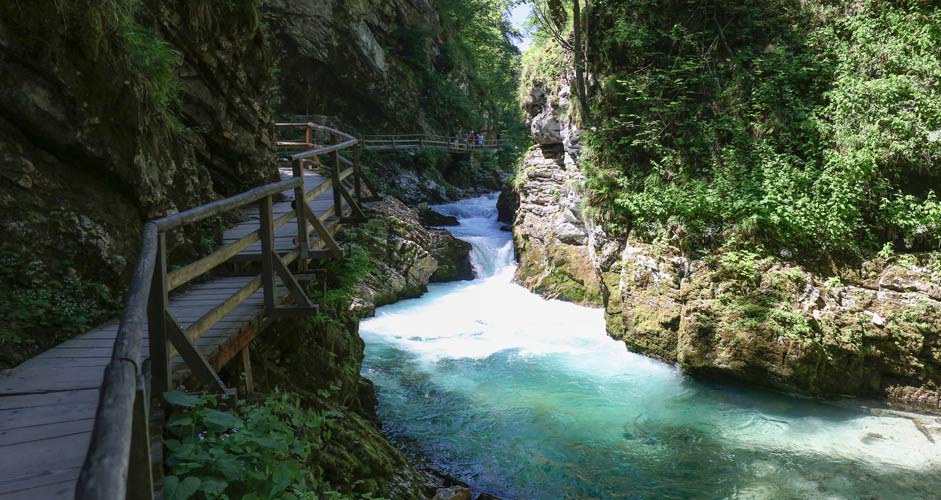 Vintgar Gorge lies outside Bled in Gorje, just some four kilometers away. This 1,6-kilometer-long gorge has taken shape around the Radovna river.

Following the gorge, there’s a convenient walking path that becomes steep only at the end, if you wish to descend to explore the Šum waterfall more closely.

Both ends of the path contain a ticket booth. Along with the 10-euro entrance fee you can buy e.g. water bottles. The standard start of the route at the southwestern end of the trail contains a restaurant and a big parking lot. The waterfall at the other end of the path also has a small parking area next to it, and obviously, it serves as a suitable starting place, too.

Vintgar Gorge is a popular attraction, and it’s advisable to go there outside the busiest times. At times, the narrow path is tight even with two people side by side, let alone a group of people trying to pass each other. Therefore, advancing along the route might be slow amongst a crowd. Moreover, on weekends you might have to queue to get the entrance ticket. 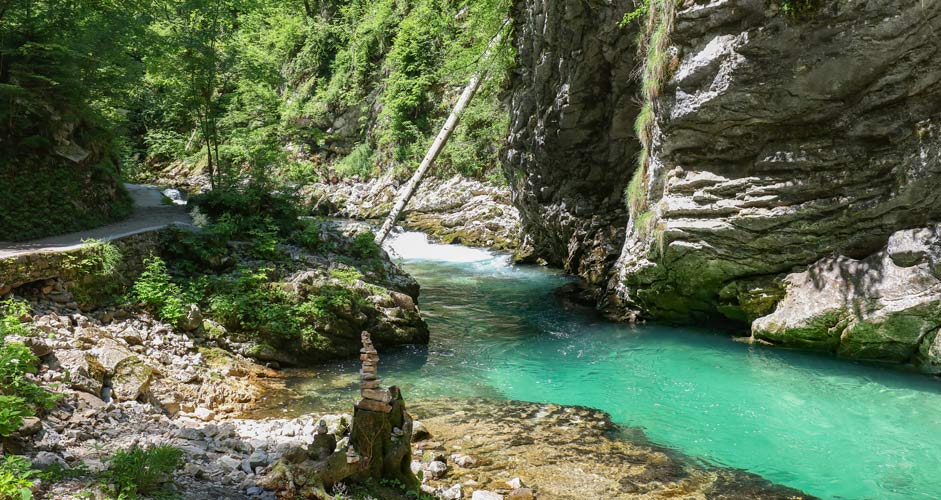 How to get to Vintgar Gorge from Bled

By taxi is the easiest choice, but busses are also available. The bus company Arriva operates ones or twice each day to a stop called Fortuna, which is situated about a kilometer away from the gorge. In summertime, ask for direct bus connections from your hotel. Bear in mind, however, that it’s difficult to avoid crowds when using tourist busses.

If you decide to walk to the gorge, the road via Podham has better walkability than the one passing via Spodnje Gorje. While both routes start off along a car road without an adjacent walkway, the route via Spodnje Gorje has a longer leg along the busy road.

Below, there are examples of hotel and restaurant prices in Bled. The hotel room prices are median prices at Booking.com.

How to get to Bled

Bled is situated at the foot of the Alps, which means the weather is unstable in summer. Although, the rains come often only as heavy afternoon showers and long periods of good weather are common. 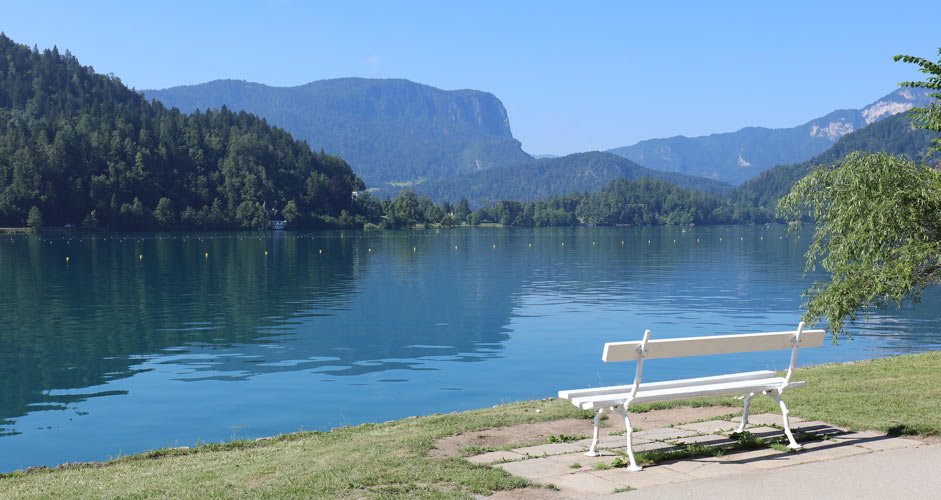