Turku is a charming mixture of Finnish culture, beautiful nature as well as picturesque bars, cafes and restaurants.

Turku is considered as the birthplace of civilized Finland. The city was founded in the early 13th century to house the Bishop of Finland. During that time, the Finnish peasant population was under catholic Swedish rule. Since those days, Turku has served as a gateway to the West. With about 200 000 inhabitants, Turku is the 6th biggest city in Finland.

The historic city center is characterized by green parks and the River Aura flowing in the middle. Turku shows its true beauty in summer, underlined by the vivid colors of countless lime trees. Among other beautiful places, the riverbanks of the Aura attract people for a picnic in warm summer days. Traditionally in July, the vibrant summer city hosts one of the biggest music festivals of Finland, Ruisrock, by the sea in Ruissalo island. 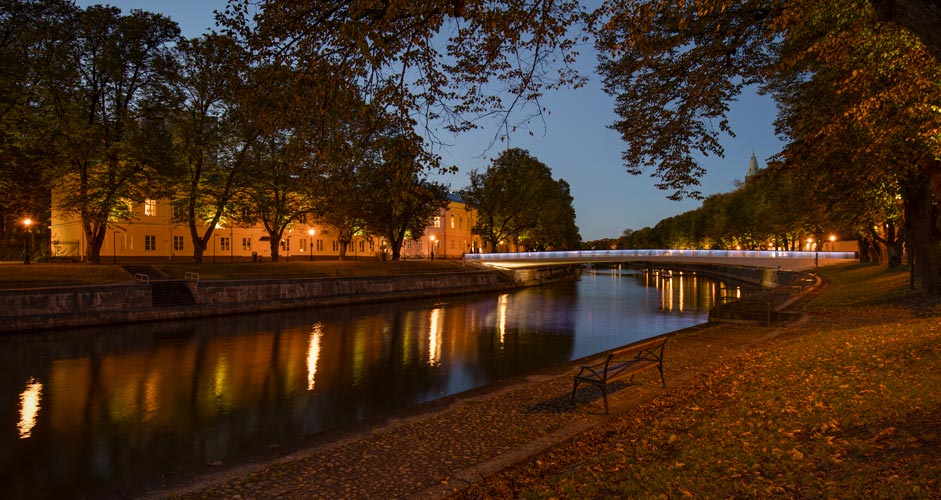 Turku is not a big city, so it's easy to visit the key sites on foot. The city center is located on the northern side of the river.

Things to do in Turku 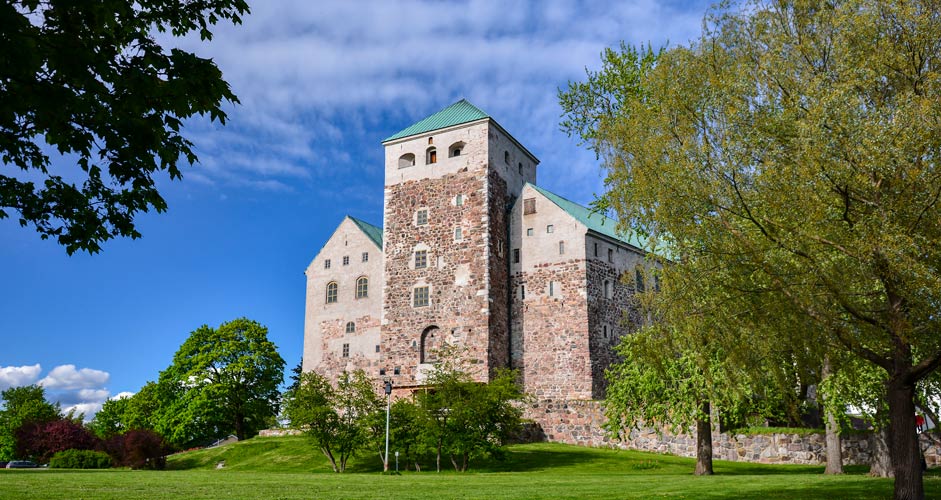 Turku Castle is a 700-year-old former fortress, situated just outside the city center, right by the sea. The medieval castle is one of the oldest buildings still standing in Finland. The castle was built as a fortress and an administrative center for the Swedish Crown, which Finland was a part of during that time.

Guided tours are organized daily in summer, but less frequently in other seasons. Check the website of the castle for more information. 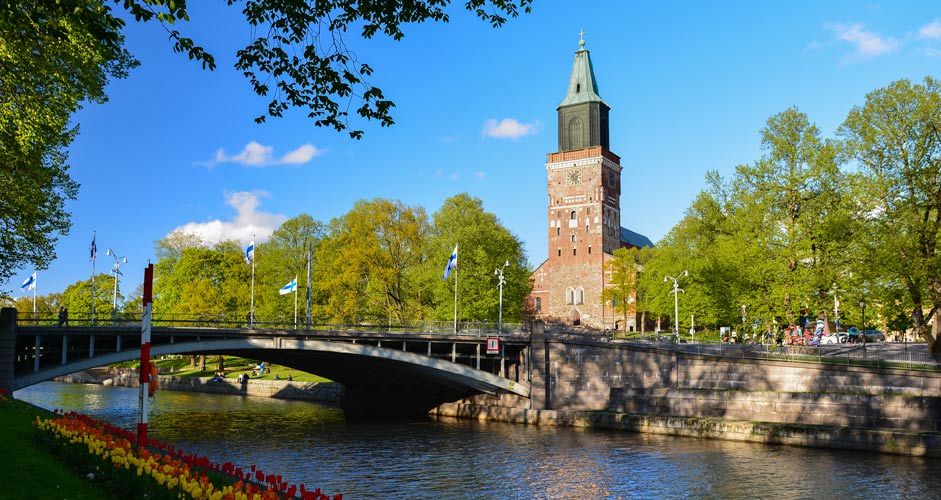 Turku Cathedral is the Mother Church of Evangelical Lutheran Church of Finland, and the seat of the Lutheran Archbishop of Finland. As such, it’s considered to be the most important church of the country.

Originally built as a catholic church, the construction of the cathedral was finished roughly at the same time with Turku Castle in the 13th century.

Address: Tuomiokirkonkatu 1
How to get there: The cathedral is situated in the city center on the eastern riverbank of the Aura with a multitude of bus connections. If you’re using a bus, please check the timetables: reittiopas.foli.fi

Aboa Vetus & Ars Nova is a combination of two completely different museums in one location. Ars Nova is a museum of contemporary art. During its construction, a series of medieval artifacts and structures were discovered from the ground beneath, which lead to the opening of Aboat Vetus Museum. On the archeological side, there are lots of interactive things for children.

Website: avan.fi
How to get there: The museum is located in the city on the East bank, about 500 meters away from the cathedral. Turku Art Museum, with a collection of 7,000 marvelous art works, is housed in a national romantic style granite building. The most famous Finnish painters, such as Akseli Gallen-Kallela, Helene Schjerfbeck, Juho Rissanen and Hugo Simberg among others, have their work here on exhibition.

Website: turuntaidemuseo.fi
How to get there: The museum is located right in the city center, one block away from the Market Square.

Naantali is a little sister town of Turku, known as the Sunshine town, located only 15 kilometers from Turku. It is a true summer town also housing the summer residence, Kultaranta, of the President of Finland. Traditionally, the president spends time there in July or August.

How to get there: The buses 6 and 7 go to the center of Naantali from the Turku Market Square. The journey time is about 40 minutes (journey planner).

Naantali is famous for the Moomin World theme park, which is based on Tove Jansson’s children’s books. The park contains plenty of theme games and activities for children to participate. The main attraction is the five-story Moomin House, a blue tower recognizable from the books and cartoons.

Turku has strong maritime traditions. The leading maritime museum of Finland, The Forum Marinum Maritime Centre, is housed in Turku. It is a lively and versatile center for maritime activities occupying two former government warehouses.

Moored at the quay outside, there are heritage boats open for visitors. The main attractions include two beautiful ships, Suomen Joutsen (Finnish Swan) and Sigyn. Suomen Joutsen is a steel-hulled, full rigged ship, with three square rigged masts. Sigyn, built in Gothenburg in 1887, is the last remaining wooden barque used for trade across the oceans. The museum ships are open during the summer months only.

Website: forum-marinum.fi
How to get there: Bus nr. 1 operates from the Market Square to the museum. The Forum Marinum bus stop is situated shortly before the museum, and before the Turku Castle stop.

The Pharmacy Museum and the Qwensel house 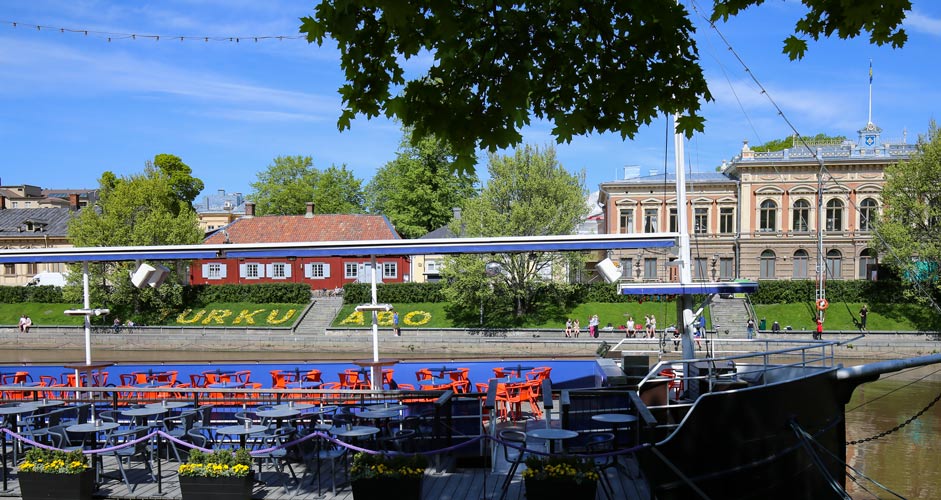 The red building is the Qwensel house.

The Qwensel House displays the life and home of the gentry in 18th century Turku. The city's oldest surviving wooden house holds stylish halls and chambers as well as the oldest pharmacy interior in Finland

Address: Läntinen Rantakatu 13b
How to get there: Located right in the city center next to the City Hall at the riverbank.

The river splitting the city offers a perfect setting for a lunch with a nice view. The riverbank contains a variety of restaurant choices, from budget restaurants to fine dining. 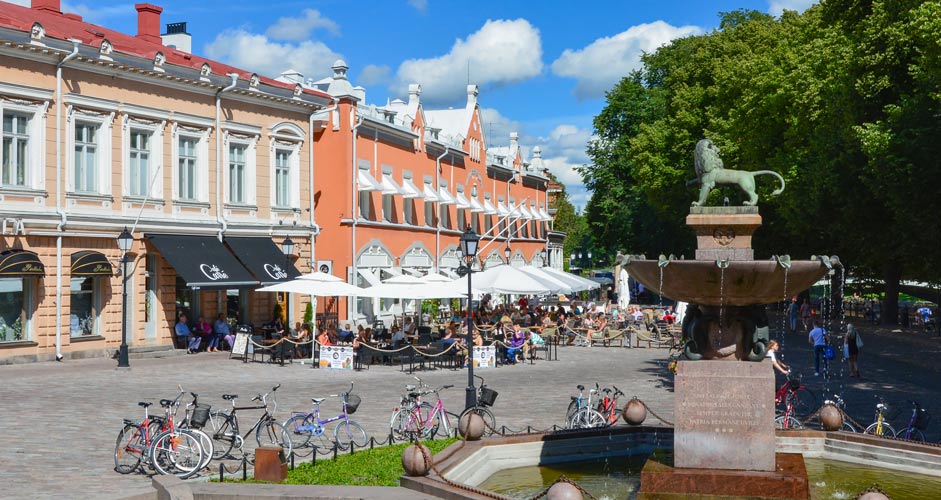 The Hansa Block is the key shopping spot right in the center of Turku. The block contains the department store Stockmann and the Hansa shopping center. 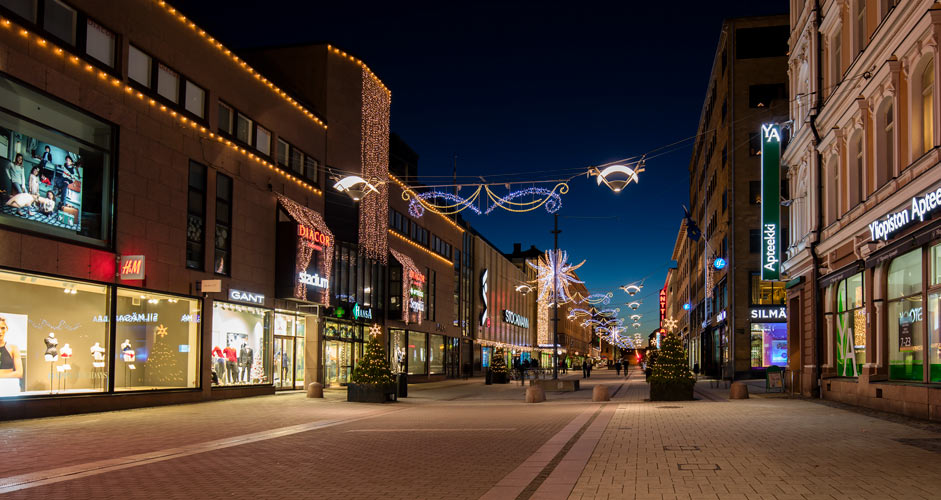 The Hansa Block and the pedestrian street Yliopistonkatu in December.

Local butchers and fishmongers sell their fresh products in the Market Hall, south of the Hansa Block. Get enchanted by the aroma of cheese sellers and enjoy a cup of coffee and a Bishop's doughnut in a cafe! Elsewhere in Finland, this sugar-coded pink doughnut is known as Berliner Doughnut. Here, however, it only has one name: Bishop’s doughnut – Piispanmunkki in Finnish.
Website: Kauppahalli.fi

Southwards along the riverbank, the next parallel street, Linnankatu, is full of smaller designer shops. One of the hippest shops is KUI design, specializing on Turku-themed clothing & accessories. The shop is situated on the way to the riverbank.
Website: KUI design

Most of the other small boutiques can be found around the Market Square and the Hansa Block.

The prices of restaurant and hotels services in Finland are above the average in the European Union. The hotel prices in Turku are steady throughout the year.

Below, there are some examples of restaurant and hotel prices in Turku. Costs of hotel rooms refer to median prices at Booking.com.

How to get to Turku

From the Turku airport:
Bus is the only option: reittiopas.foli.fi Line 1 runs between the airport and the harbor (close to the castle). If you want to get off at the Market Square in the center, it’s indicated as Kauppatori in Finnish.

From other cities or airports:
You can find all options for trains or buses here: matkakeisari.fi. VR means railway/train and all others are buses. 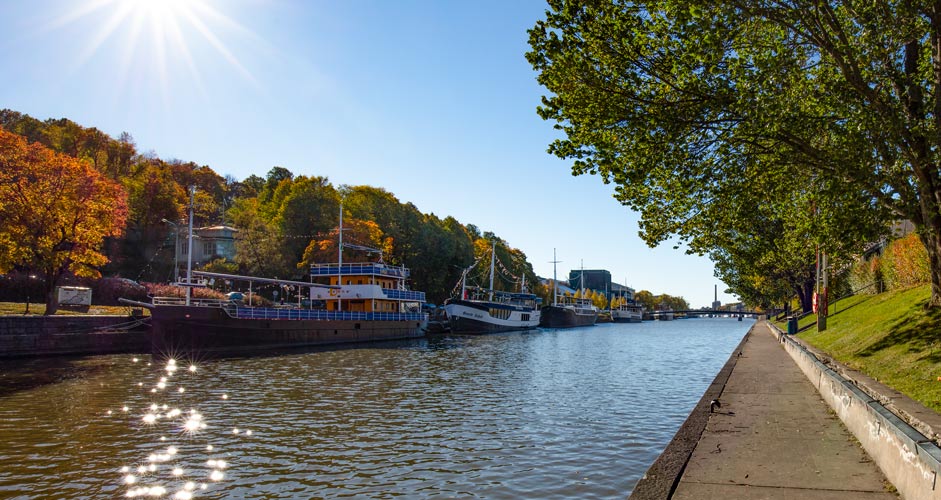 Winter: The winter months are cold in Turku and the breeze from the sea chills you to the bone. Temperatures in December vary on both sides of 0°C. December is often slushy and rainy. January and February are drier months and it snows more frequently. Temperatures vary on both sides of 0°C but can drop to -15°C, so it's better to observe the weather forecast in advance.

Spring: March can still be snowy, and temperatures are close to 0°C. In April, there’s sunshine more frequently and the snow starts to melt, as temperatures surpass 0°C. May is still mild with temperatures around 10-15 °C.

Autumn: It rains frequently in September, and temperatures drop back to 10-15 °C. In October, temperatures may drop to 0°C and it snows occasionally, but the snow will melt away. November and October are a part of the slush season, with a lot of rain and occasional snow. Temperatures are close to 0°C during the daytime.