The medieval, fortified town of Trogir is located on a small island, connected to inland by two small bridges. It has been inscribed on the UNESCO list of World Heritage Sites for having "conserved its urban fabric to an exceptional degree and with the minimum of modern interventions".

While Trogir has a lot to offer for anyone interested in cultural history, it also has numerous cozy outdoor restaurants for dining and having a few drinks in the utmost beauty of the town.

For the beach lovers, there are several beaches in the area outside the main island. 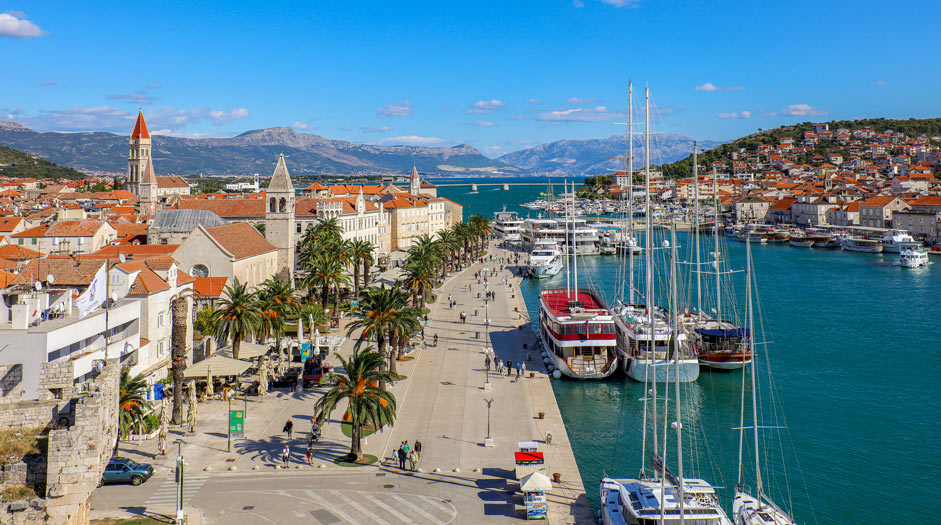 The Riva promenade is still busy in October. 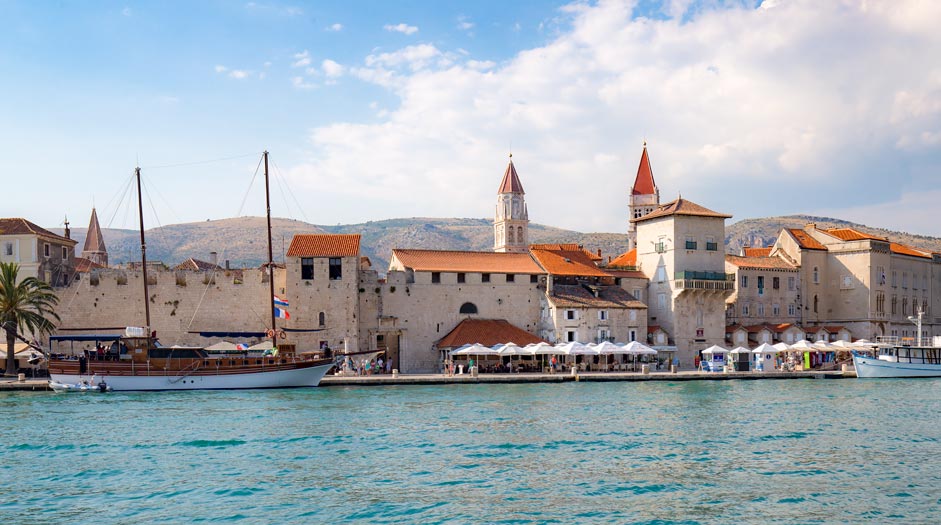 Where to stay in Trogir

Those coming to Trogir for a city holiday, would certainly prefer the main island inside the city walls. For those appreciating some peace and quiet with or without beach areas, there are several options nearby. Trogir is in fact a much larger town than just the main island.

The southern part of Trogir is spread over a larger island, Otok Čiovo. The terrain in South Trogir is hilly and the selection of services available is limited. The ascend to the hills begin right after the Čiovo Bridge.

The terrain north of the canal is flat, and there are more services compared to the southern side. For example, there’s a large outdoor market place as well as grocery stores and a shopping center on the northern side.

The largest beach in the area situates at the village of Okrug Gornji on Čiovo island. It also serves as an option for accommodation, if you prefer beach life over city life. You can read more about it at the beach section. 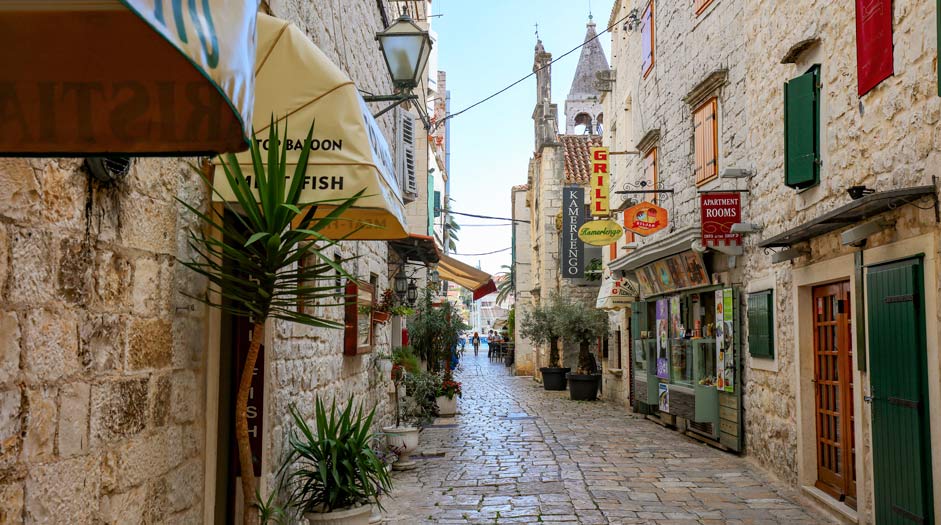 The streets of the main island are mainly paved with cobbles.

Things to do in Trogir 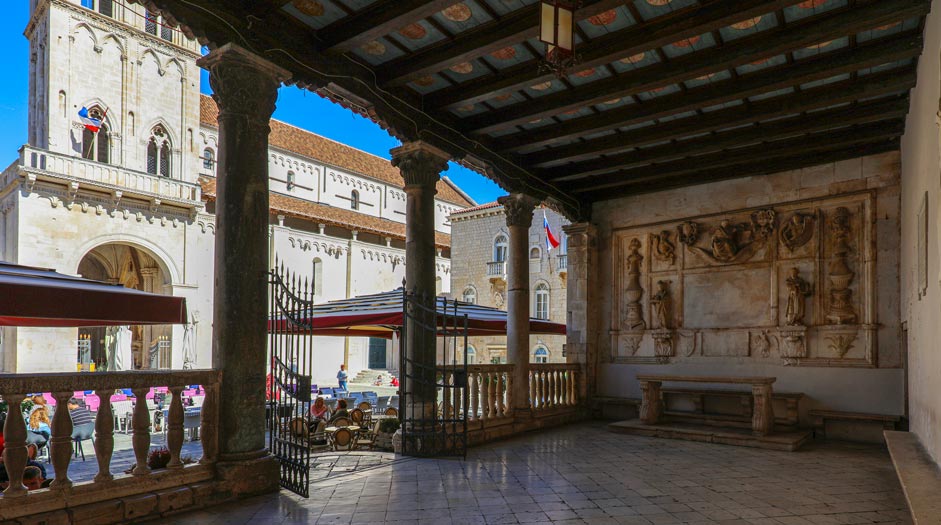 The loggia and the cathedral.

The large cathedral of St. Lawrence (Katedrala sv. Lovro) is a landmark in Trogir and a great attraction to visit. Its bell tower offers great views of the entire city.

In front of the cathedral, there's a cozy square, Trg Ivana Pavla II, with restaurant terraces and occasional live music in summer evenings. On the edge of the square, there's the town hall as well as a small open loggia.

The door directly below the clock tower that is shown in the picture below leads to a small tomb. The clock tower is located on the same square as the cathedral. 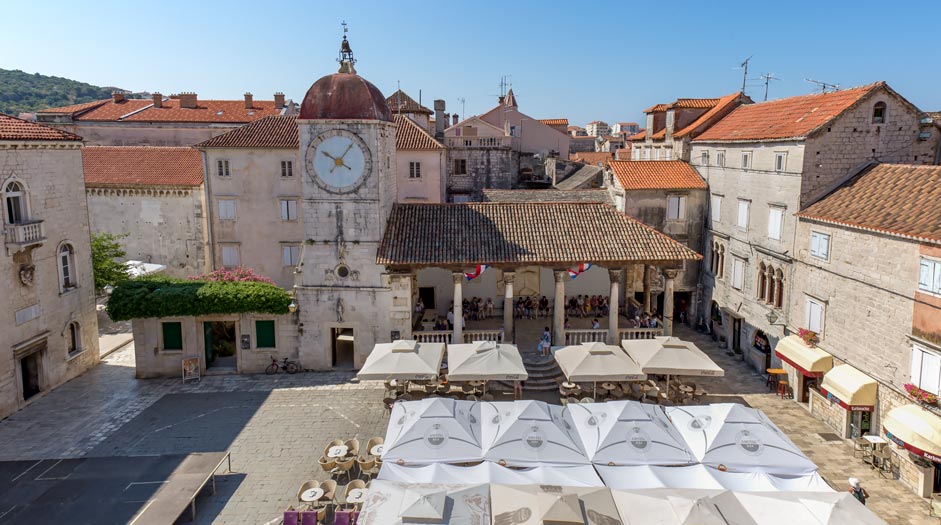 The loggia and the clock tower. On the left, the stage for live music.

On the edge of the main island, there’s an old stand-alone fortress. It consists of walls, towers and a small inner yard, which is a venue for performances around the year. 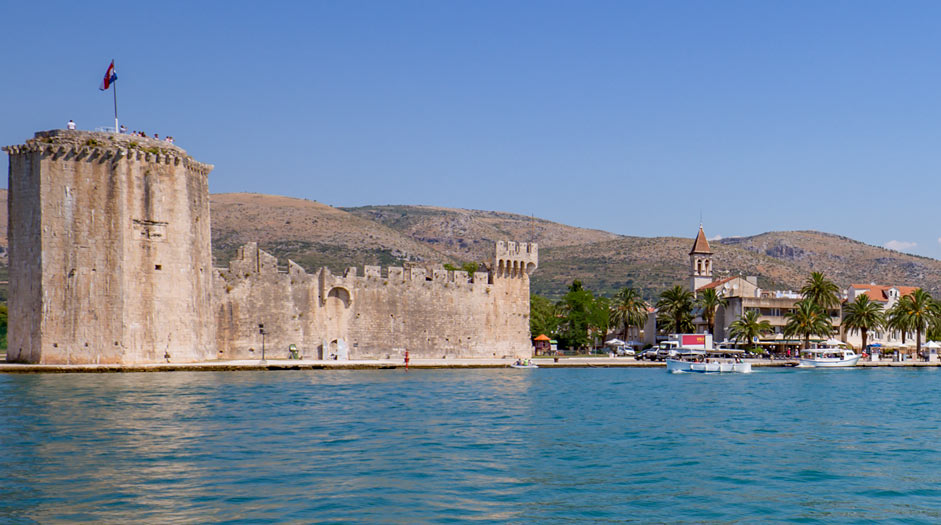 Croatia is famous for its beautiful archipelago and crystal-clear waters. Trogir is a great base for boat tours due to its location. Whether you'd like to rent a boat with or without a skipper, or participate in an organized island hopping tour, there are plenty of options available. For instance, the popular Blue Lagoon is situated just ten kilometers away.

If you want to travel on scheduled connections to the larger islands from Trogir, the port of Split can be reached in an hour by the Bura Line ferry, which then provides further connections to numerous other destinations.

Church and Monastery of St. Dominic

The Church and Monastery of St. Dominic (Crkva i samostan sv. Dominik), also containing a small treasury, is located right next to the promenade. The traditional courtyard of the monastery is rectangular with citrus trees growing in the middle. These attractions can be visited for an entrance fee during opening hours. 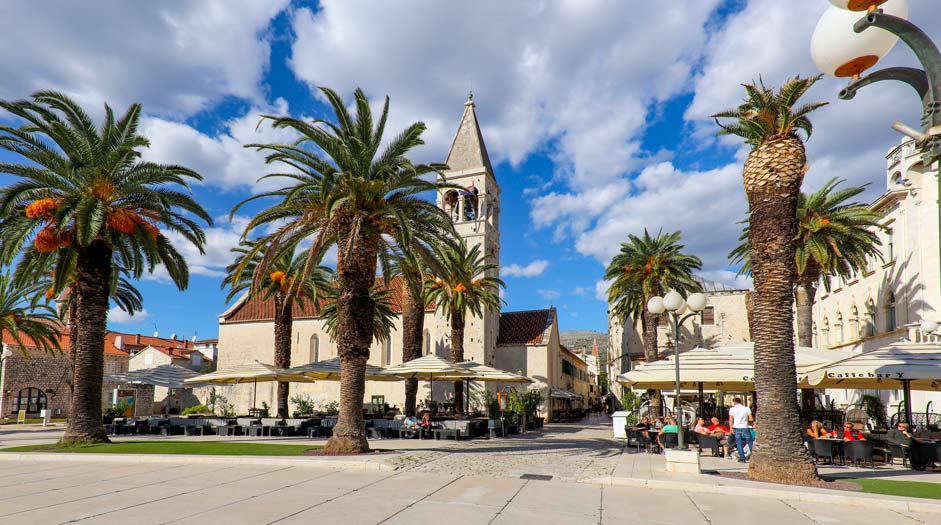 The Monastery of St. Dominic

At least jet ski safaris, snorkeling, scuba diving and sea kayaking are great options, if you wish to spend an active holiday in Trogir.

Although the main island doesn’t contain any beaches, there are plenty of them in the nearby area. Hence, Trogir is a good destination to combine city and beach holidays. The beaches of Trogir consist mainly of light-colored gravel or small stones, and the water deepens rather quickly. Often, what may be described as just one beach, tends to consist of several smaller beach coves in a row.

You should consider bringing along swimming shoes due to sharp stones. 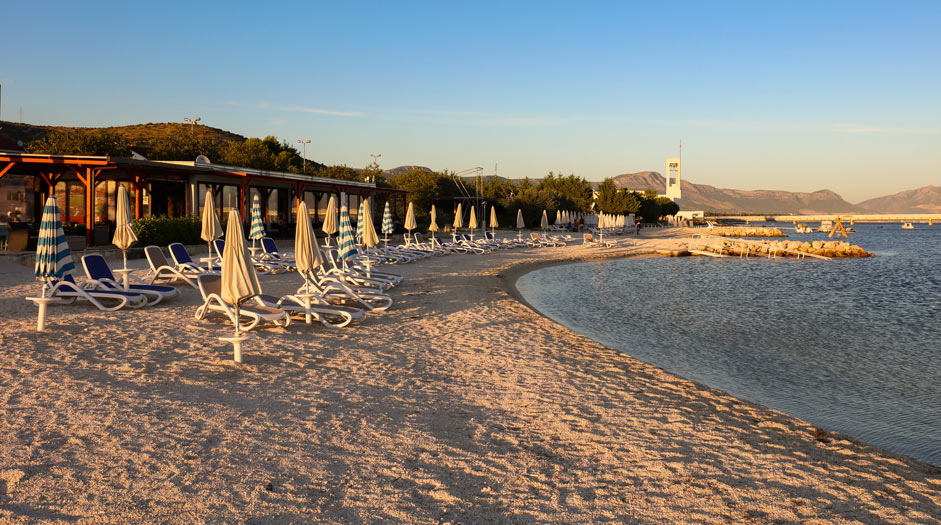 Gradska Plaža in the evening sun in September.

To the north-east of Trogir within walking distance, there's a nice beach with a couple of cafes, sun loungers, a small playground for children, and at least in 2021 also a large bouncy castle (on land, not in the water).

This beach is referred to as Gradska Plaža, i.e., City Beach, and it is situated less than a kilometer away from the main island and 600 meters from the bus station. 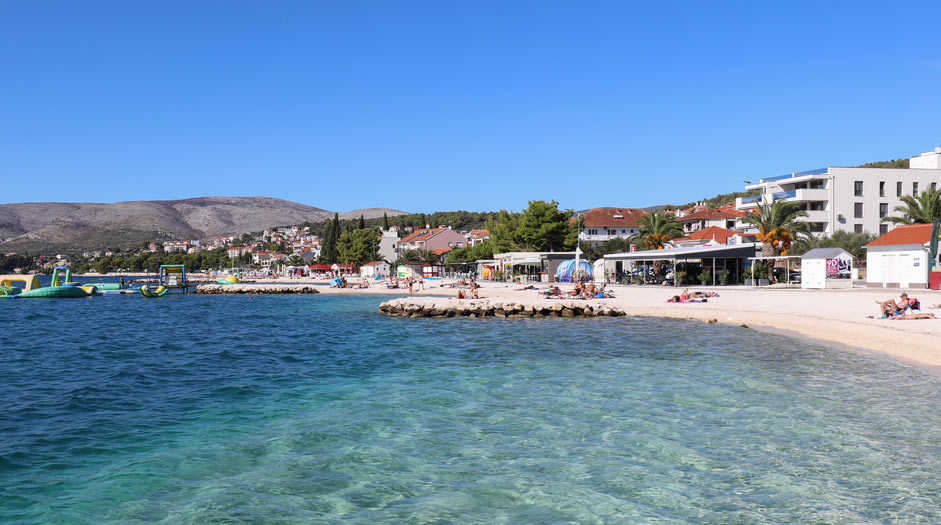 With 700 meters in length, the largest and the best beach of the area, Cobacabana, often also called Okrug Gornji Beach, is located south of Trogir on the island of Čiovo, in the Okrug Gornji village. 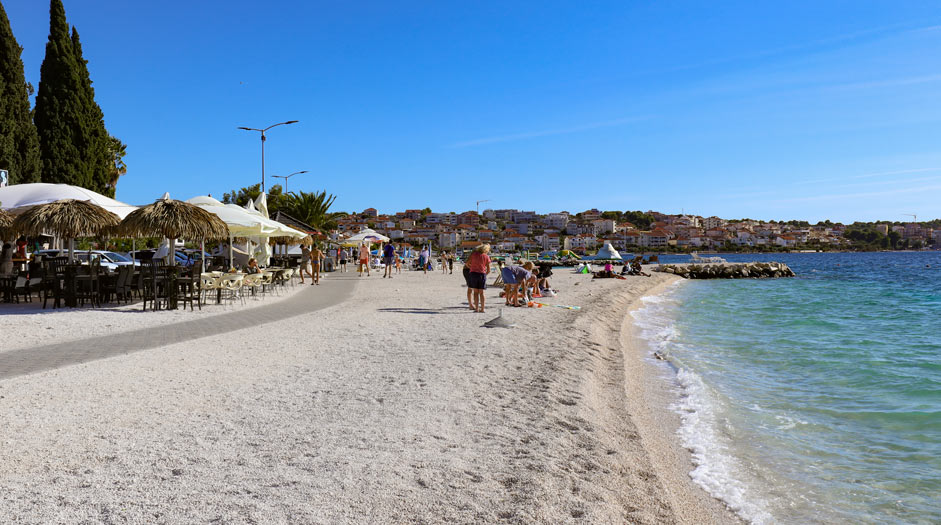 The distance from the center of the island is about two kilometers, but there's a high hill in between, so walking is not as easy an option as you might imagine. However, if walking a few hundred meters uphill is not an issue for you, getting there on foot is a possibility.

At the northern end of the beach there is a camping area, which can be reached by a ferry departing from Trogir every hour during the summer. Bus and taxi or Uber are also good options.

If you live on the western side of Trogir, you should also consider the beaches of the neighboring village, Seget Donji. The 1.6-kilometer-long pedestrian street (Šetalište Vice Zulima - Virulice) begins after the Marina Baotić, and reaches all the way to Medena. The beaches vary along the way, but are gradually improving towards Plaža Medena, the best beach in Seget Donji. 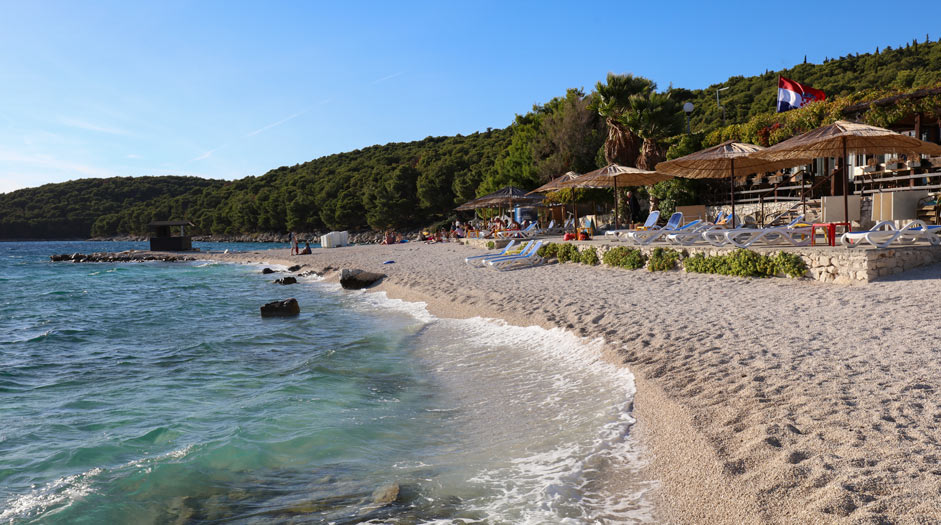 There are restaurants, cafés, and shops along the way, and particularly Medena offers all the relevant beach services, with water sports included.

Other beaches in Trogir

There's a small beach within walking distance in the southern/eastern parts of Trogir. However, the seabed doesn't look as clean as in most other beaches. It is located 600 meters east of the Čiovski Bridge, immediately after the boat docks. On Google Maps, it's just referred to as "Public Beach". 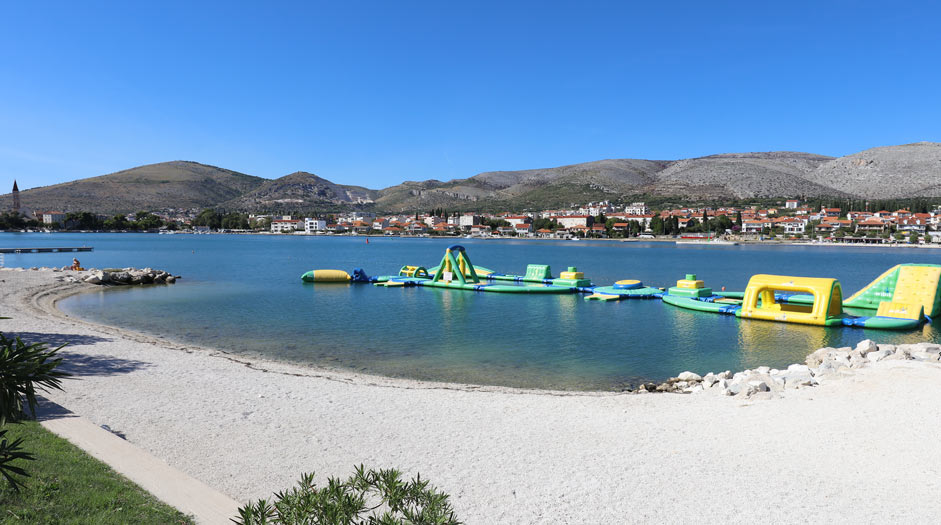 Regarding food, Trogir is a diverse destination, with most restaurants concentrated on the main island. While the northern side of the bridge contains most grocery stores and a shopping mall, there are only a few restaurants on that side.

There are restaurant terraces on the streets, squares, cozy courtyards and along the promenade of the main island. The menus range from steaks, pizzas, and burgers to fine dining. However, seafood plays the main role, as Trogir is, after all, a seaside town.

One dish particularly worth tasting is black risotto, i.e., squid risotto that is dyed with its own ink in the end. This delicacy is a popular dish on the Croatian coast and is widely included in restaurant menus. More regional specialties are described in the restaurant section of Split. 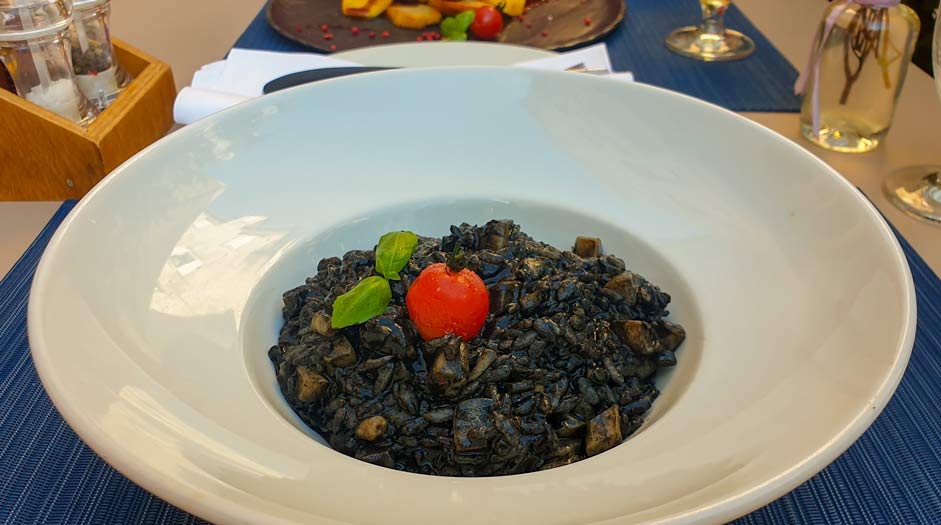 There are some clothing stores on the main island, but Trogir is not a great shopping town. A small shopping center, Marisa, opened in 2017, is situated 600 meters west of the bus station.

To the north of the main island, there’s a market area open from morning till evening, with everything ranging from clothes, vegetables, cheeses, meats, and oils, etc. for sale. The largest grocery stores are located between the bus station and the Marisa shopping center.

Below, there are some examples of restaurant and hotel prices at the main island of Trogir. Trogir is more affordable than the more famous neighbor, Split.

The costs of hotel rooms refer to median prices at Booking.com.

Trogir is located just six kilometers away from Split Airport

Bus line 37 operates between Split and Trogir with a stop by the airport. The bus stop is located near the airport terminal along an adjacent road, about a 300-meter walk away. The travel time is 8-10 minutes, and there are buses leaving every 20 minutes, or every 30 minutes on Sundays. For more information and schedules: promet-split.hr.

With the general fare of over 100 kunas (15-20 euros), taxis are quite expensive compared to the distance they cover. Some pre-ordered transportation can cost more than 30 euros. The Uber app may show prices of less than 60 kunas, but they may be difficult to get hold of, as Uber drivers don’t want to lose their place in the long queue at the airport for such a low price. The drivers prefer to take on customers to Split and other destinations farther away.

Cars are not allowed to drive on the inner streets of the main island, and hence they drop you off at an adjacent street outside of the island (not on the promenade in the south). The taxi rank is located by the bridge leading to the main island, in front of the large Konzum market. The bus station is located on the opposite side of the street. 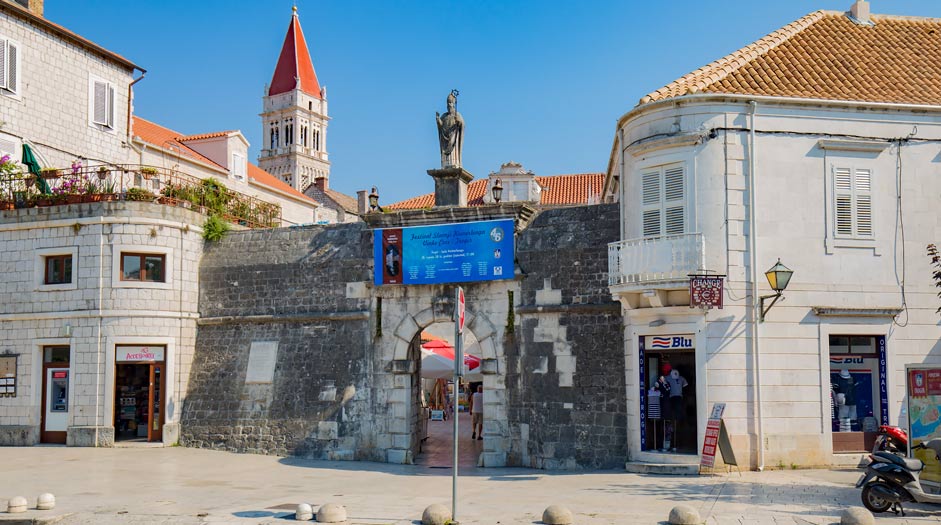 The northern gate is the turning point for taxis.

If you travel to Trogir from the center of Split, the Bura Line ferry is also an option. The journey takes an hour, but the sea views are great. 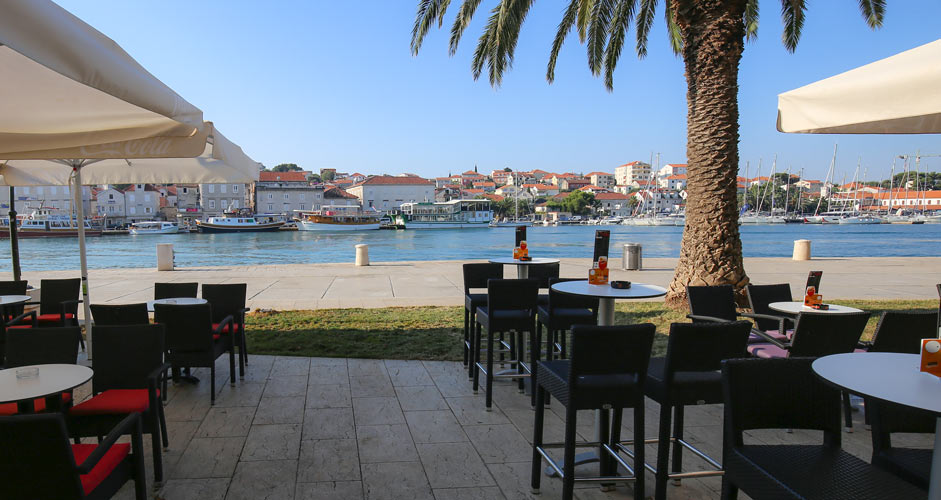 Winter: In the winter, there’s a typical Mediterranean winter weather in Trogir. Along with the mild temperatures, there’s high humidity and frequent rain. The average daily high temperatures usually vary between 8-15 °C. At night, sub-zero temperatures are possible but unlikely. Extremely strong Bora winds can sometimes hit Trogir in the winter.

Spring: Spring is a great time to visit Trogir. Bear in mind, however, that the water is still cold and may spoil the fun, if you’re a keen swimmer. The daily high temperatures surpass 20°C early in the spring, but the evenings aren’t that warm and there’s often a cold wind blowing. Therefore, it’s best to have a coat with you. May is already a very warm month with temperatures going constantly over 20°C and closing in on 30°C. It rains less in spring compared with winter and autumn months.

Summer: From June to August the sunshine is pretty much guaranteed. It really gets hot in Trogir, as the temperatures climb to 30 °C and above.

All destinations in Croatia