The Golden Circle is the most popular sightseeing route in Iceland. The tour is usually done as a day trip from Reykjavik.

There are three main attractions on the Golden Circle: Thingvellir National Park, Haukadalur Geothermal Field and Gullfoss waterfall which are all located along the same route. Usually, the bus tours only cover these three destinations.

The complete Golden Circle includes other attractions as well, of which the Kerid Crater and the Reykjadalur Hot Springs Valley are described in this article. On the bottom of this page, a few others are also mentioned.

All five attractions are reachable by a normal car. There’s no need for a 4x4 which, however, is required for smaller F-roads.

Please note that this guide has been written in 2017, so some of the information might not be correct anymore. 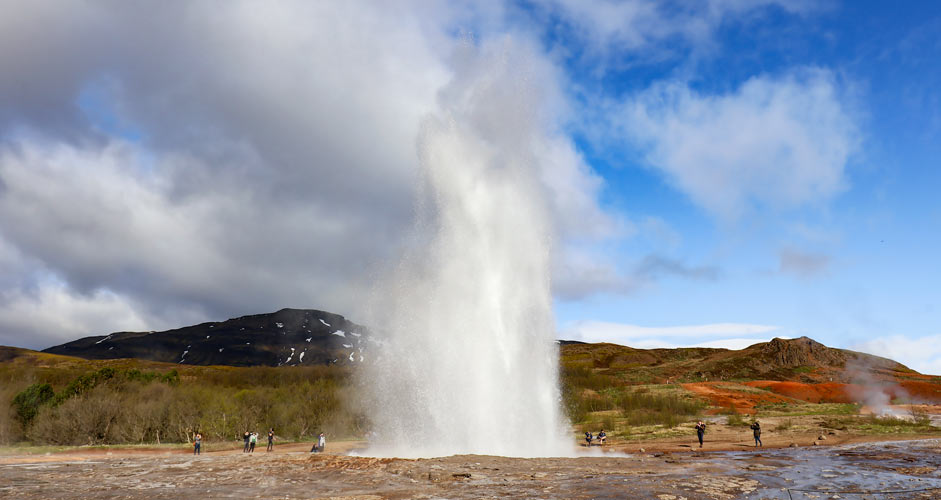 Sights along the Golden Circle 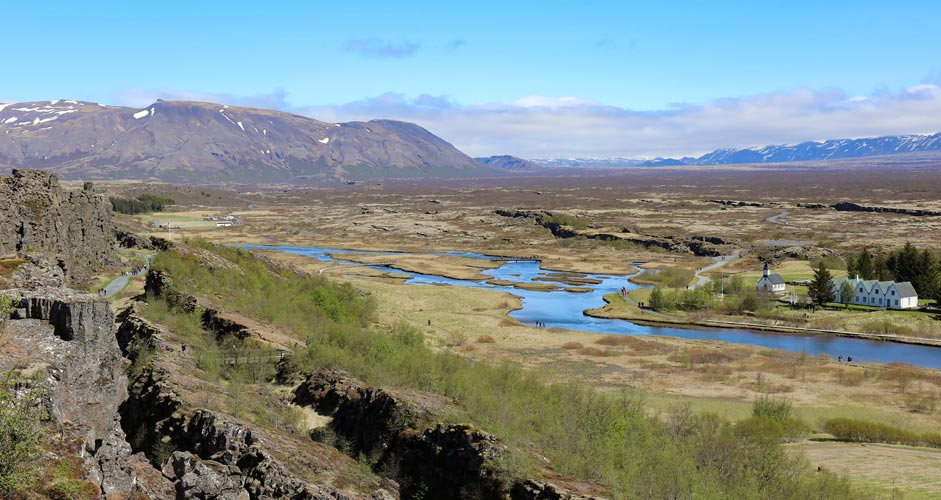 Thingvellir (Icelandic: Þingvellir) is a national park and an important place in the history of Iceland:

You can also dive between the continents in the Silfra fissure in Lake Þingvallavatn with crystal clear waters. Or if you prefer hiking, there's lots of space for that. There is also a small waterfall in the area, Öxarárfoss. 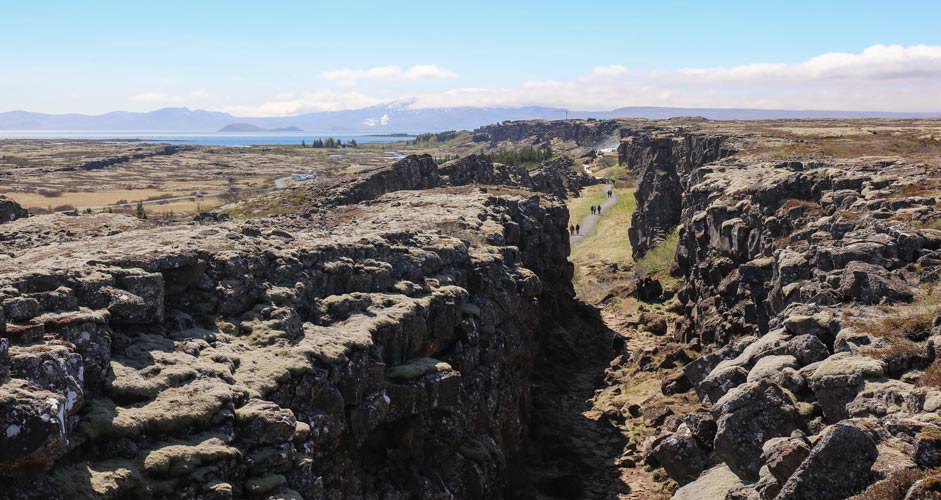 Driving instructions: It's best to leave the car by the north side of the lake. There are several parking areas in Thingvellir. A plain map of the roads and the two biggest parking lots can be found here.

If you are driving from the west, the best place to leave the car is in the parking lot P1 in the picture, located next to the Hakið Visitor Center.

If you are driving from the east and coming back the same way, it's not necessary to drive the road 36 all the way to the other side; instead, you can take the road 361 and drive straight to P2 or other smaller parking lots in the area.

It's not possible to drive between the two biggest parking lots because of the Almannagjá gorge, so if you are coming from the east and driving the road 361, the only way to get to the road 36 is to drive northwards (361) or back east (361). The eastern part of 361 is pretty narrow, so watch out for cars coming from the opposite direction.

There are parking meters at least in the bigger parking lots. A ticket is needed for each car, which covers the whole day. 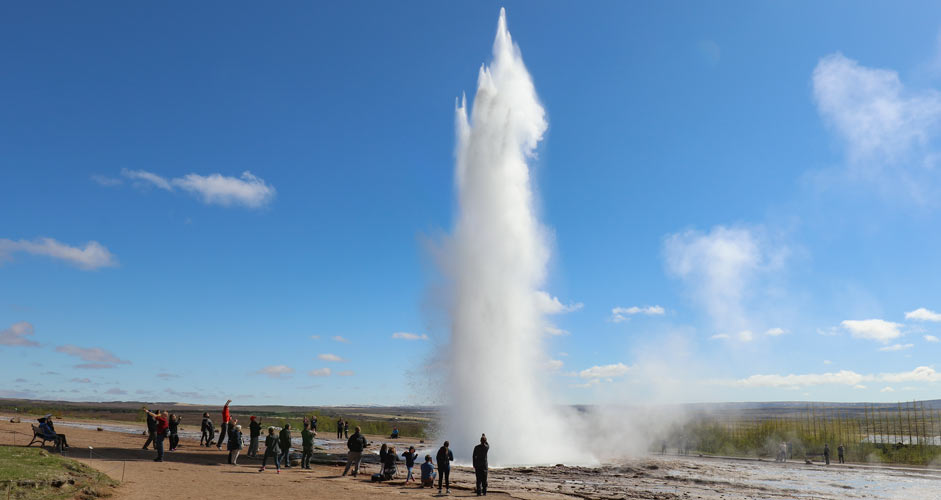 Haukadalur geothermal field includes geysers and hot springs. It is very easy to reach, as it is located right by the road with the geothermal field on the left, and a hotel, a restaurant and some other services on the right-hand side of the road.

The area is pretty small, taking some 15 minutes to walk through. Some parts of the area are restricted from the audience as they are dangerous. Safe and dangerous areas are clearly marked with ropes and signs.

Geysir itself, after which all geysers have got their name, doesn't erupt anymore. A smaller one, Strokkur, erupts about every 4-8 minutes. 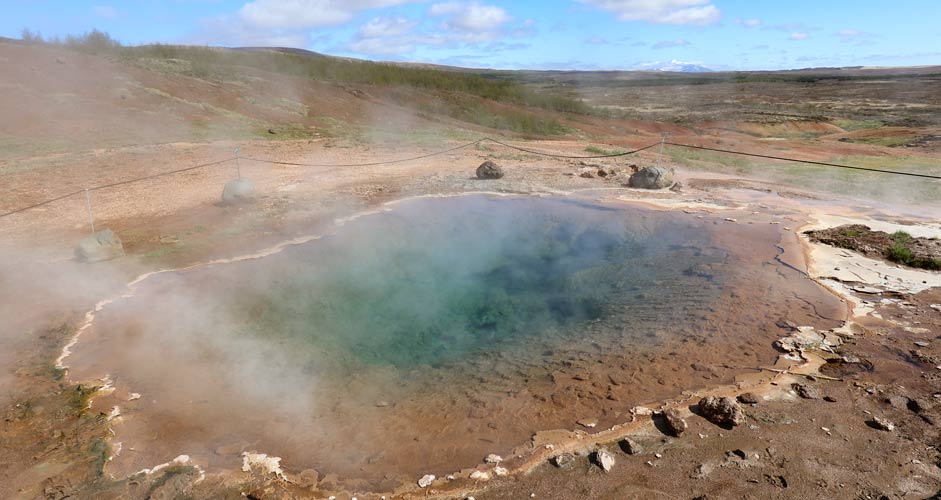 Most of the springs don't erupt

Driving instructions: Haukadalur geothermal field is located by the road 35 on the way to Gullfoss. There's a large parking lot on the right-hand side of the road that is easy to spot. 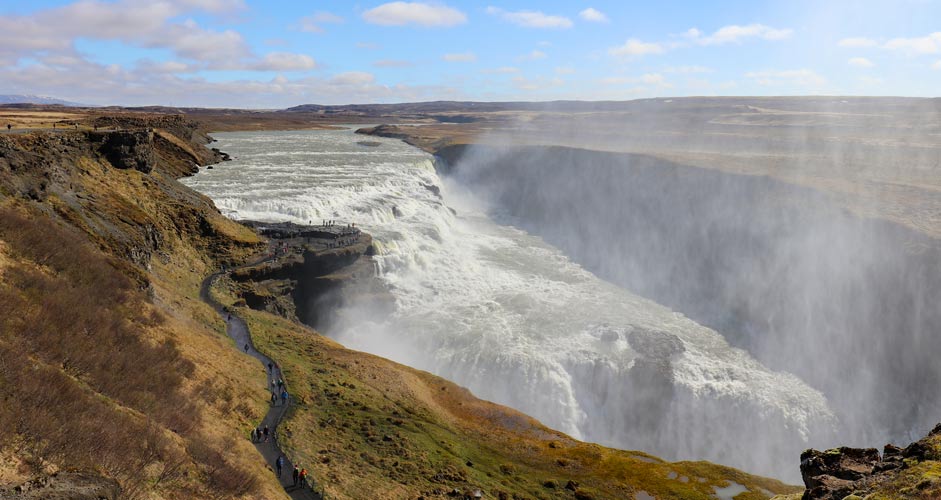 There are plenty of possibilities to enjoy Gullfoss waterfall from different angles and distances. There are two viewing levels, connected with stairs, and a path leading right next to the waterfall in the summertime.

There are parking lots at both levels, but since most people use the wooden stairs to visit both levels anyway, it usually makes no differences as to which level you choose for parking.

A restaurant/cafe/souvenir shop is found on the upper level, which is also the bigger one of the two. 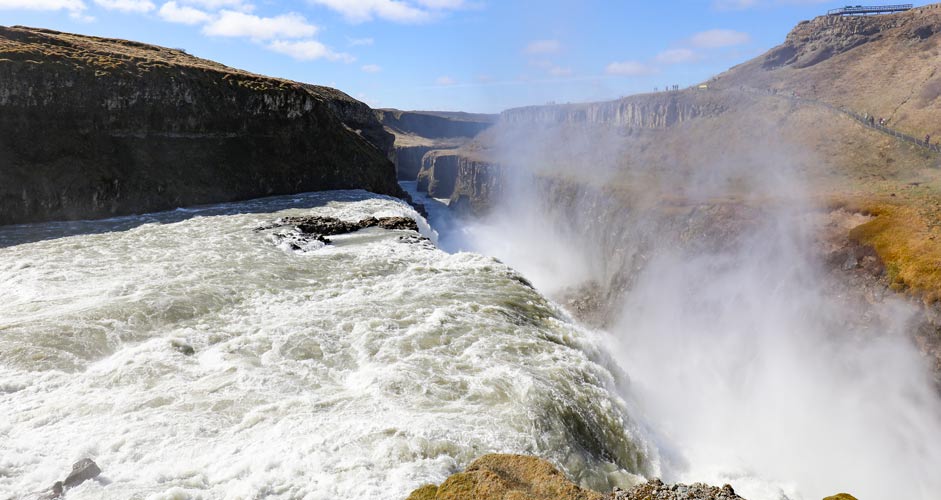 Driving instructions: Gullfoss is located by the road 35, just before changing to an F-road (F35). The first sign leads to the lower parking lot and the next sign to the upper one. 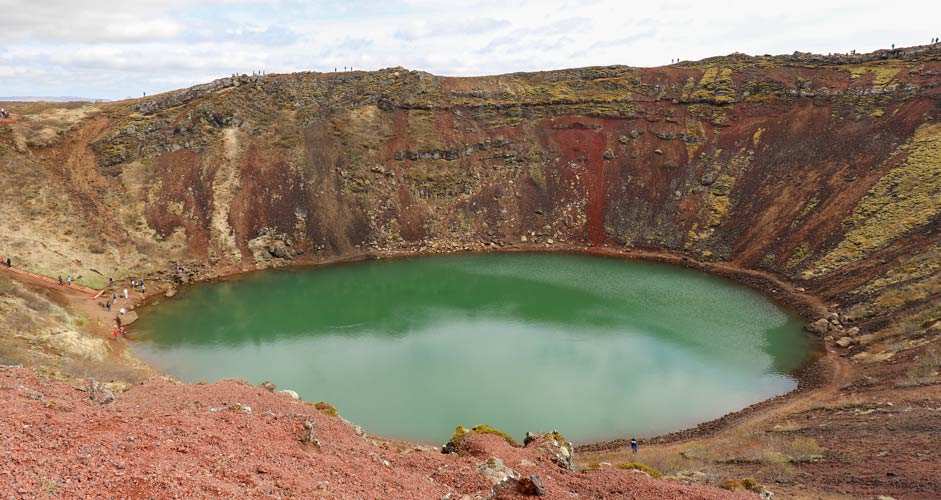 Kerid Crater is located south of the three previously mentioned main attractions of the Golden Circle. It's along the southern route back to Reykjavik.

There's a green lake at the bottom of the Kerid crater, and most of the other area is reddish sand. It’s easy to walk around the crater along the top or the bottom circumference.

There’s a parking lot between the crater and the road. As the top of the crater is almost at street level, a very little effort is required to visit the site – unless of course you wish to walk down to the lake.

A small admission fee is required to visit the crater.

Driving insructions: The crater is situated by the road 35, but you need to pay attention not to miss it, as it doesn’t stand out from the surroundings. There's a sign, though, and the ticket booth is also easy to spot. The entrance looked like this in Google Street View in 2013. 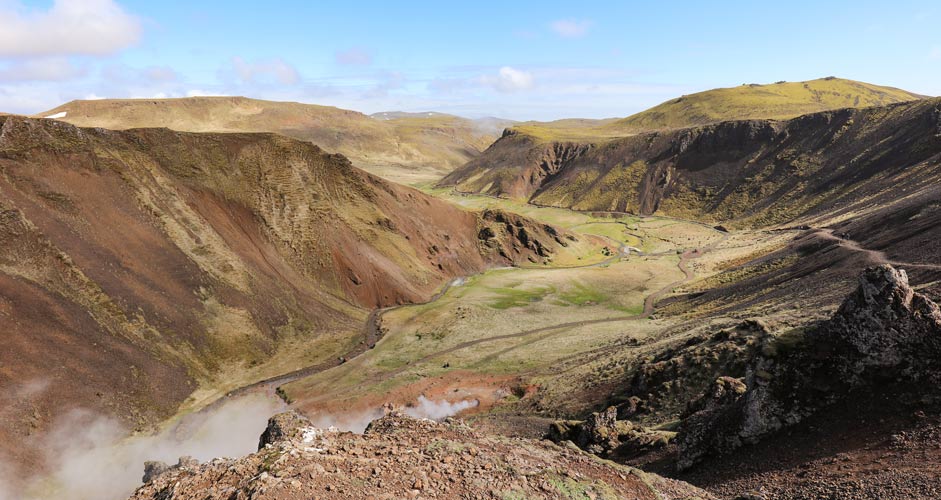 Just like Haukadalur, Reykjadalur Valley is a geothermal area, but instead of a small field, it's a beautiful valley between mountains with hot springs everywhere.

There's a river running through the valley. When the water from the hot springs merges with the cold river water, a section of the river turns into a warm bath.

It takes about an hour to walk there from the parking lot. In the beginning, there’s rather a steep climb, but it gets easier soon along the way. And the view is getting better and better as well. Because of the scenery, the river bath could be the best place to visit on the Golden Circle - even without bathing. 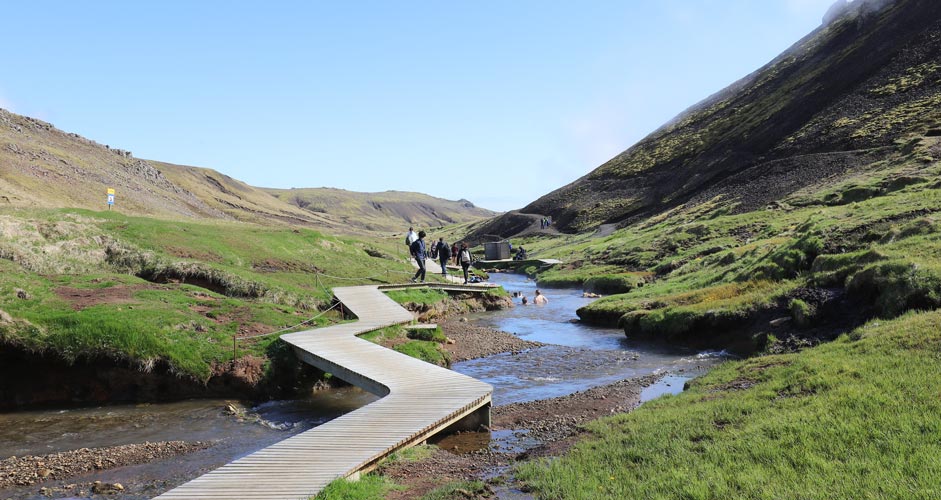 On the way there are several hot springs, and in some of them the water is literally boiling. So always stay on the path, because there are new ones emerging all the time, some of them underground as well. Some tourists have been seriously injured while stepping off the path or the wooden deck around the bathing area.

When arriving at the river, there are some tiny walls behind which you can change into your bathing suit, but there are no real dressing rooms or any services available either. 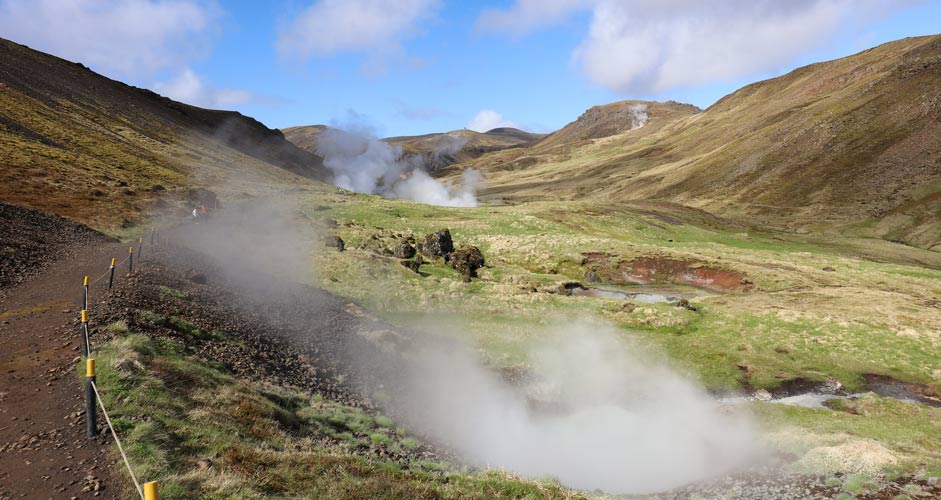 It tends to be windy in Iceland, but the rare occasions with no wind may result in some very annoying bugs flying about in the summertime. Because of the bugs in the calm and sunny weather, or the very cold breeze up in the hills in the windy weather, it's best to bring along a coat with a hood or a cap of some kind.

Driving instructions: Turn to Hveragerði from the Ring Road (1). Drive that road (Breiðamörk) straight for four kilometers, and there will be signs to the Reykjadalur hiking trail. There's a small cafe by the parking lot.

There's also an info sign indicating there’s another trail, a shorter one, to the valley from north.

Other places to visit on the Golden Circle

Laugarvatn Fontana - A spa and a smaller version of the Blue Lagoon.
Location: Between Thingvellir and Haukadalur near the crossroads of 365 and 37.
Website: fontana.is

Brúarfoss waterfall
Location: Also between Thingvellir and Haukadalur, but a little away from the main road and harder to find.

Faxi waterfall
Location: By the road 35 south of the geysers in Haukadalur. On the way to the Kerid Crater.

Gamla Laugin - A spa also known as Secret Lagoon.
Location: By the road 30 south of the Gullfoss Waterfall. A small detour is needed.
Website: secretlagoon.is

Friðheimar tomato farm and restaurant
Location: By the road 35 between Gullfoss/Haukadalur and Kerid Crater.
Website: fridheimar.is

All destinations in Iceland