Maltese island Gozo is big enough to contain a variety of holiday destinations, but small enough to be explored quickly and easily. It’s like a smaller, quieter version of the main island Malta.

There are attractions both, inland and coastal areas. Victoria, with its fortified ancient Cittadella, is the capital of Gozo, located in the middle of the island, whereas Xlendi and Marsalforn are beach destinations on the coast.

Exploring Gozo is as easy as it gets, since most villages are almost within walking distance from each other. Therefore, while in Gozo, you might as well visit several locations. 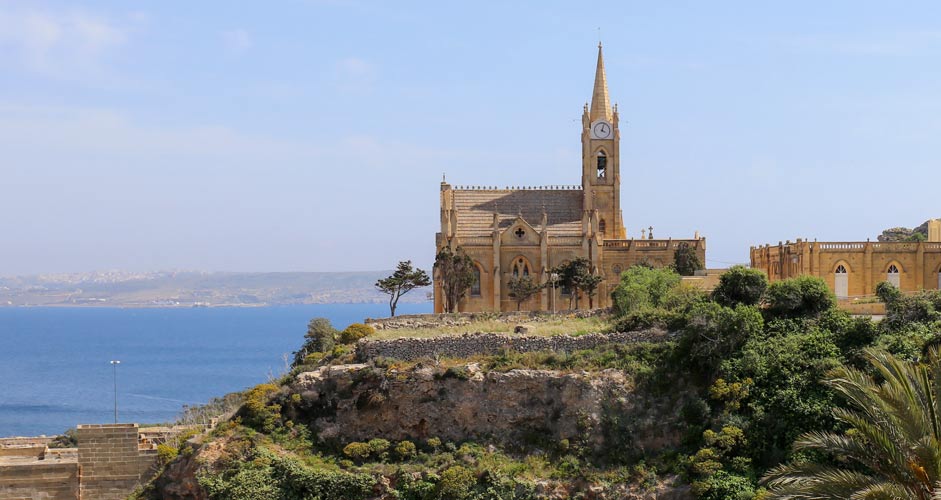 Il-Kappella ta' Lourdes church is standing on a cliff right by the Mgarr Harbor. 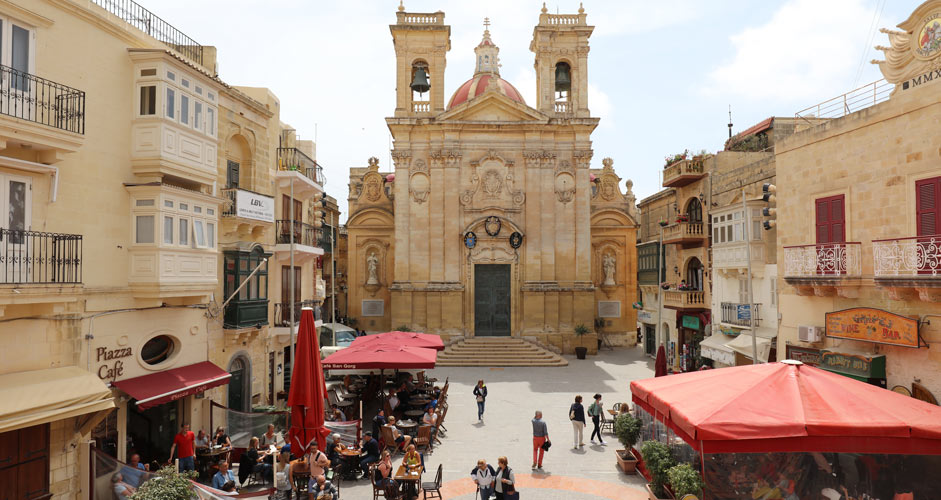 Victoria is situated in the middle of the island, at the crossroads of most roads and bus lines. The city is locally known as Rabat, which is sometimes also used in maps. That might be a bit confusing at times for tourists.

The citadel, Cittadella, is the main attraction to visit. It's a small fortified city or village with museums and other attractions. The oldest parts of Cittadella were built already in the 15th Century. You can walk around Cittadella for free, but for some places, like the Cathedral, an admission fee is required. 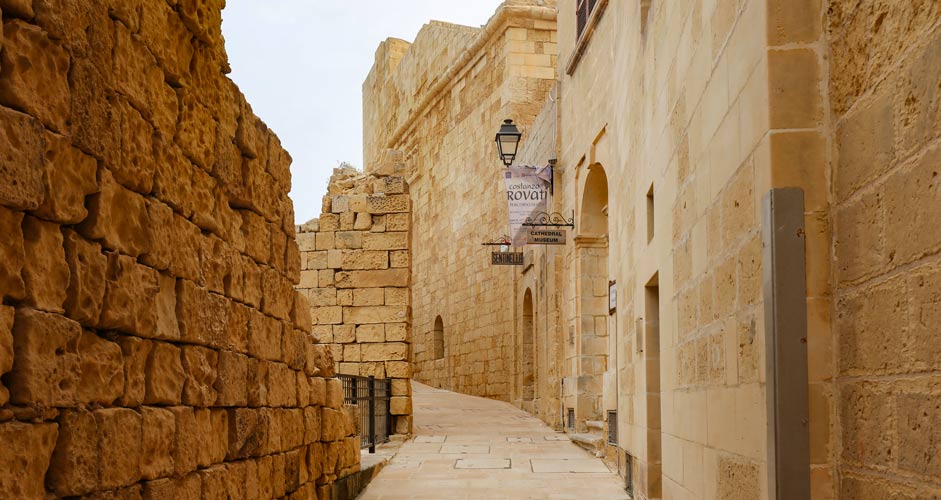 The most charming area of Victoria unfolds in the southern side of Cittadella. It’s packed with tiny alleys and cozy squares, such as Pjazza San Gorg and Pjazza l-Indipendenza, which are great for having a rest and a cold drink in charming historical surroundings.

The best shopping spots in Gozo are located along the main street Triq ir-Repubblika, starting north of Pjazza l-Indipendenza and continuing to the east. On the main street, there are two small shopping centres, The Duke and Tiġrija Palazz, along with smaller shops. 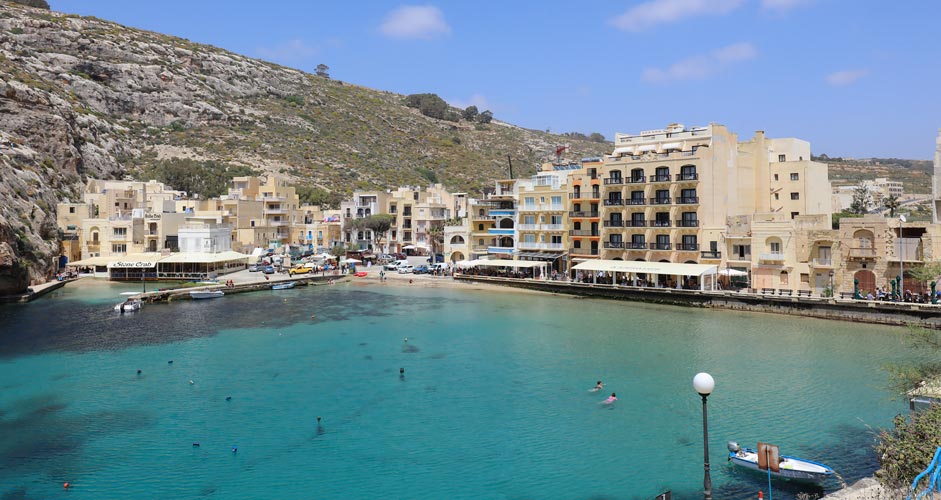 Xlendi is a holiday resort at the end of a beautiful long bay surrounded by hills. It's a popular place for snorkeling and scuba diving, thanks to its crystal-clear waters. The shoreline is full of cliffs for sunbathing, and there are plenty of ladders descending to the sea for having a swim along the bay. 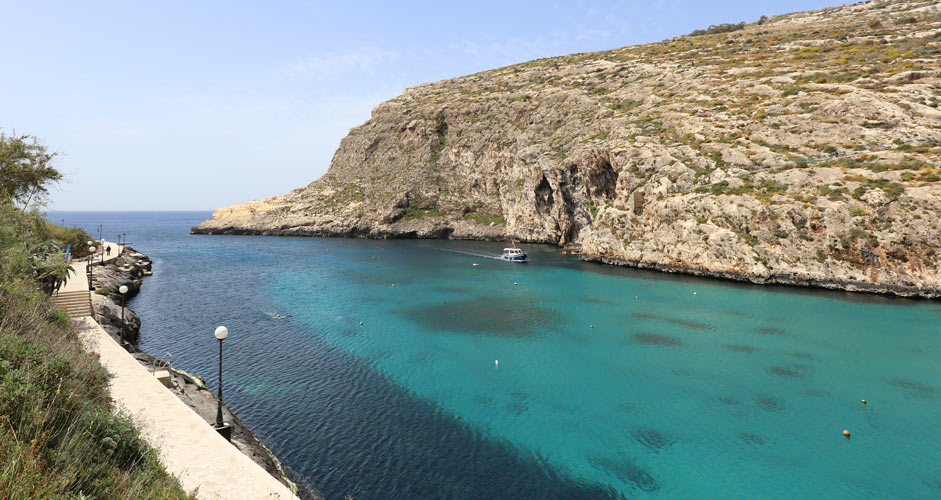 The bay is about 300 meters long

Xlendi used to be a small fishing village, but now it's taken a leap towards tourism, by offering a selection of hotels, restaurants and holiday apartments. Xlendi Bay is a perfect place for adults to relax and enjoy the sun and the sea for a few days. Kids, on the other hand, might prefer the sandy beaches on the east coast rather than the tiny Xlendi beach. 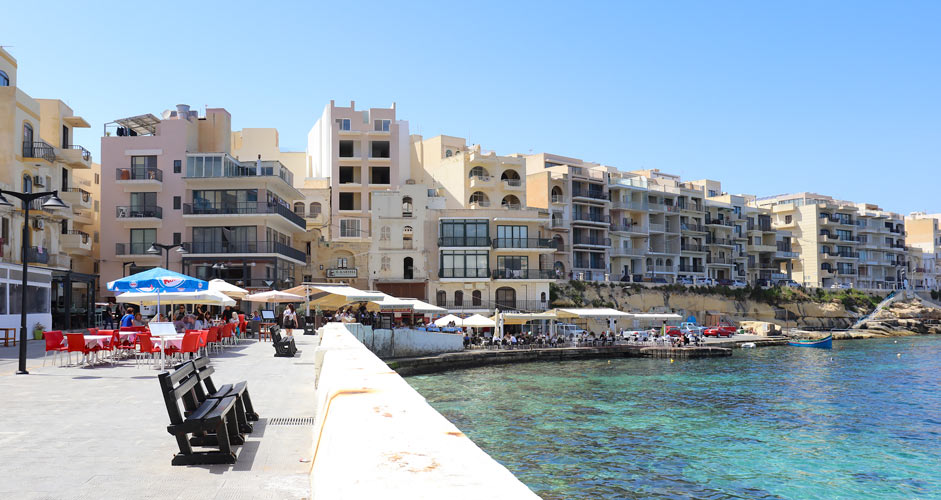 Marsalforn, located on the eastern side of the island, is the most popular holiday destination in Gozo. The heart of Marsalforn is the beach promenade with restaurant terraces and a small pebble beach in front of it.

On the eastern side of the bay, there are more cliffs for sunbathing, but beware of the sometimes strong sea currents. Westwards, there’s a park right after the Marsalforn center. Two kilometers thereafter, you’ll come across salt pans in peculiar surroundings. 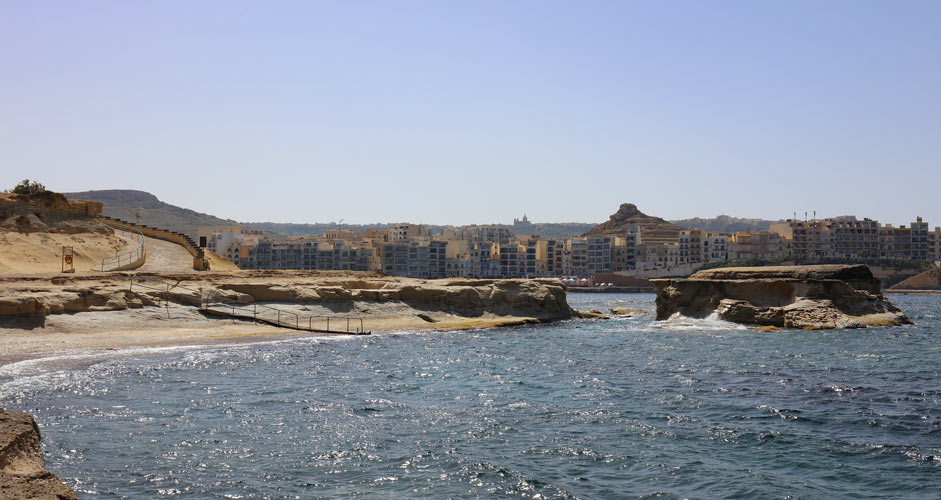 Cliffs for sunbathing and swimming on the eastern side of Marsalforn

The best beach in Gozo by far, Ramla Bay, is located a few kilometers south of Marsalforn. The bus line 322 that runs between Marsalforn and Mgarr Port stops at the Ramla Bay (400 meters from the beach). The journey takes about 16 minutes. A walk to Ramla Bay from Marsalforn looks easy on the map, but it's pretty hard instead, especially in hot weather, since there's a steep hill in between the two. 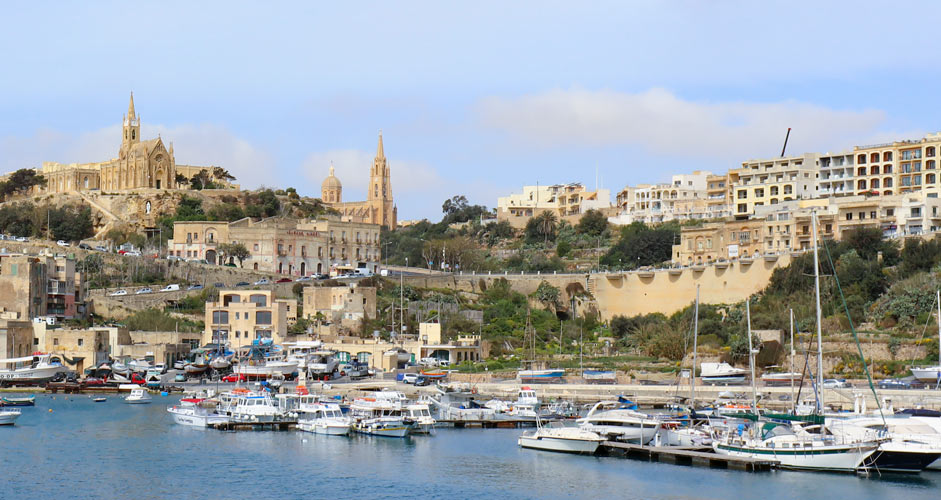 If you are planning to stay in Gozo only for a night or two, you might want to consider staying in Ghajnsielem by the ferry port. It's a nice local village with some churches, restaurants, holiday apartments, great views, and a "Betlehem Village" that comes alive in December.

Not only is Ghajnsielem a good place to enjoy local lifestyle, it also allows an easy access to Comino & Blue Lagoon boats. And what’s more, you don’t have to go far from the ferry port with your luggage.

Fort Chambray, built in the 18th century to guard the new intended Capital of Gozo, is located next to Mgarr Port. However, the plan never played out and, currently, Fort Chambray is being developed into a high-class housing, hotel and service area; apartments are already available for booking and the hotel will be completed later. For more information: fortchambray.com. 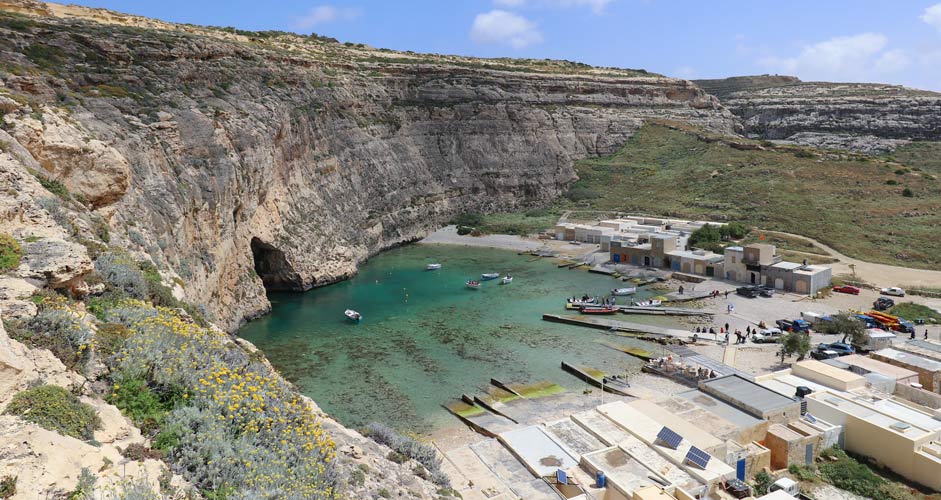 Many of the most impressive attractions of Gozo are located on the western coast, in San Lawrenz: There's a large car park in the middle of the area, convenient for parking a rental car. By bike, there’s a nice 1,5-kilometer downhill to get there but beware that you must climb back the same way, which is a bit of an effort in a hot weather.

One of the main attractions of Gozo used to be the Blue Window or Azure Window, located in San Lawrenz, but it collapsed in March, 2017. 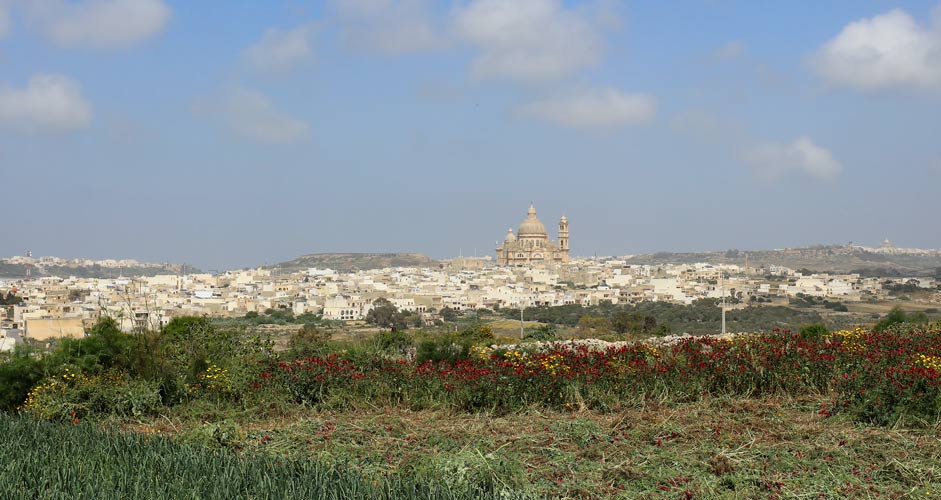 Maltese people are religious; even in tiny villages there may be several churches, sometimes massive compared to their surroundings. According to Wikipedia, there are as many as 46 churches in the tiny island of Gozo. 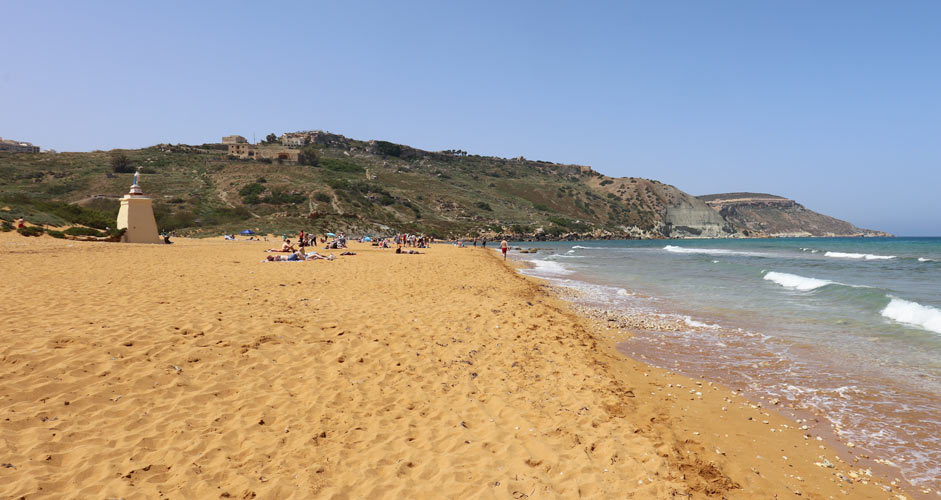 Ramla bay, situated south of Marsalforn on the eastern side of the island, is the best and the largest beach in Gozo. There’s fine, golden sand and plenty of room for sunbathing on the beach. The shoreline is quite shallow, but there might be strong underwater currents in windy weather. There’s a snackbar, ice cream bar and a restaurant just behind the beach.

The Ramla bus stop is 400 meters from the beach. The area between the bus stop and the beach is available for parking.

The beach of San Blas is much smaller and also covered with fine, golden sand. It's located just one cove southwards from Ramla Bay.

The condition of the beach varies a lot, mostly according to the time of year. It may be in great condition and the restaurant may be open, but in spring or fall it may also look like this. If you are planning to go to San Blas, it could be a good idea to read some recent Tripadvisor reviews beforehand.

Also note that there’s a the very steep downhill to get to the San Blas beach. In summer, there is usually a transport service for a small fee to get up and down the hill. 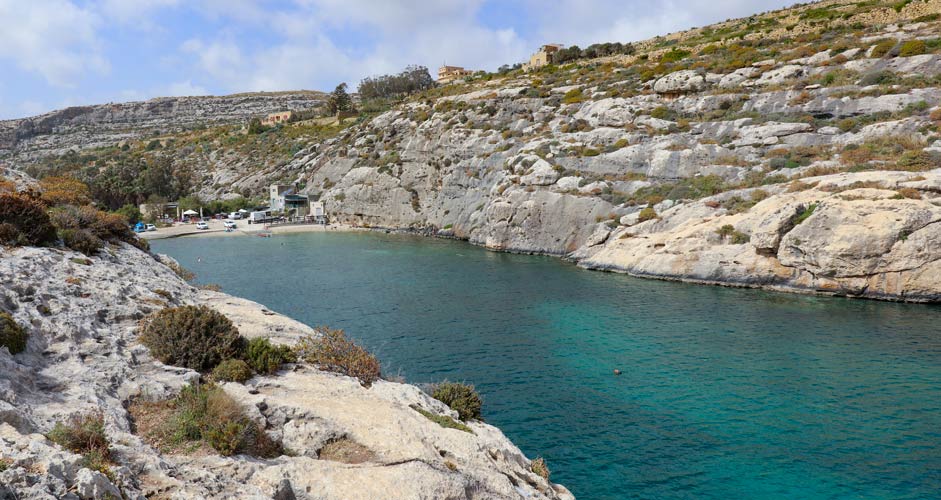 Sheltered by cliffs, at the end of a long and narrow bay, you’ll find the small pebble beach of Mgarr ix-Xini. The beach isn't the main reason to visit Mgarr ix-Xini; instead, it’s the beautiful narrow bay guarding the beach. There are staircases down to the water also from the cliffs.

The cove is also a popular diving and snorkeling site. There is a snackbar behind the beach. The road down to the beach is narrow, so there are no public buses to the beach.

The bay is famous for the film By The Sea, starring Angelina Jolie and Brad Pitt. It was filmed almost solely in Mgarr ix-Xini. The hotel and the bar are staged in the film, but Mgarr ix-Xini is the shooting location. Except for the scenes taking place inside of a hotel room, they were filmed in Corinthia Hotel in St. Julian's.

Other beaches in Gozo

The shoreline of Gozo tends to have coves with pebble beaches and cliffs, whereas sandy beaches are rare. A small beach worth mentioning here is called Hondoq Ir-Rummien, situated in the southeastern part of the island.

If you're staying in Gozo, the island of Comino with the Blue Lagoon is also worth visiting.

How to get around in Gozo

The whole island is constant uphill and downhill. Therefore, walking from one village to another is usually out of the question, and you’re bound to need a vehicle of some kind.

The Capital, Victoria, is on higher ground in the middle of the island, while typical destinations and beaches are located by the sea, a long and sometimes steep downhill away from Victoria.

Renting a bicycle is a good choice in the autumn, winter and spring when the weather is milder. In the summertime, on the other hand, with temperatures as high as +40 centigrade, climbing those uphills without a motorized vehicle might be too big of an effort for many. There's a place by the Ferry Terminal for hiring all kinds of vehicles: Mgarr Tourist Services. Hertz and Avis have also their offices at the Mgarr Port area for renting a car.

There’s a local bus network that covers the whole island, if you want to save an extra penny. Bear in mind, however, that the buses are small and easily full, at least the ones leaving the ferry port. It’s therefore good to have an alternative plan, just in case.

Hop-on Hop-Off buses work well, if you're going to Gozo only for a day trip.

There is only one airport in Malta (Luqa) and it's located on the main island Malta. You can get a bus from the airport to the Cirkewwa Ferry Terminal on the northern part of the island. For the route map of public buses, click here.

From Cirkewwa Ferry Terminal you need to catch a ferry to Gozo. The voyage takes 25 minutes, and there are ferries leaving about every 45 minutes. The fee is paid only on the return trip, so you can just walk aboard on your way to Gozo. For more information, click here. 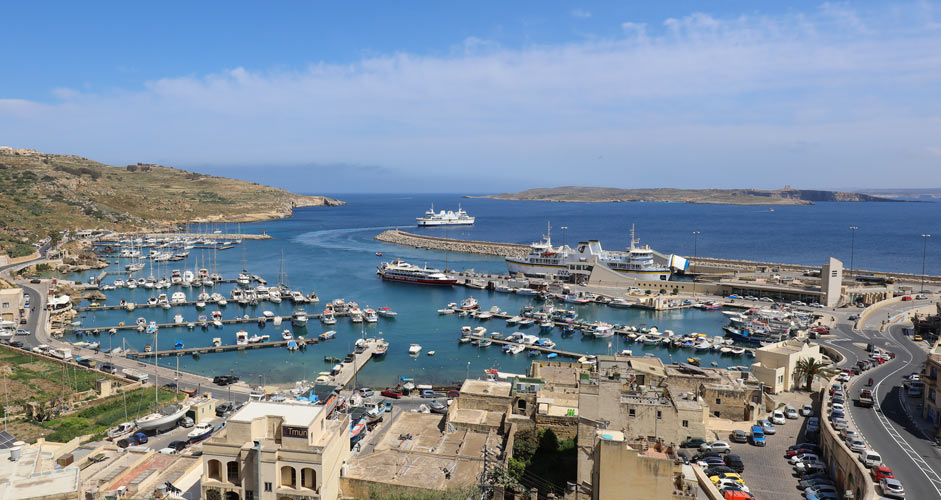