The arid coast of Malta is mainly covered with cliffs and rocks, but there are fantastic locations for a perfect beach holiday to be found. The best sandy beaches of Malta are located in the northern and northwestern parts of the island.

In the images below from early spring, you might see grey seaweed piled up on the shores. Don’t worry, the seaweed will be removed before the summer months. 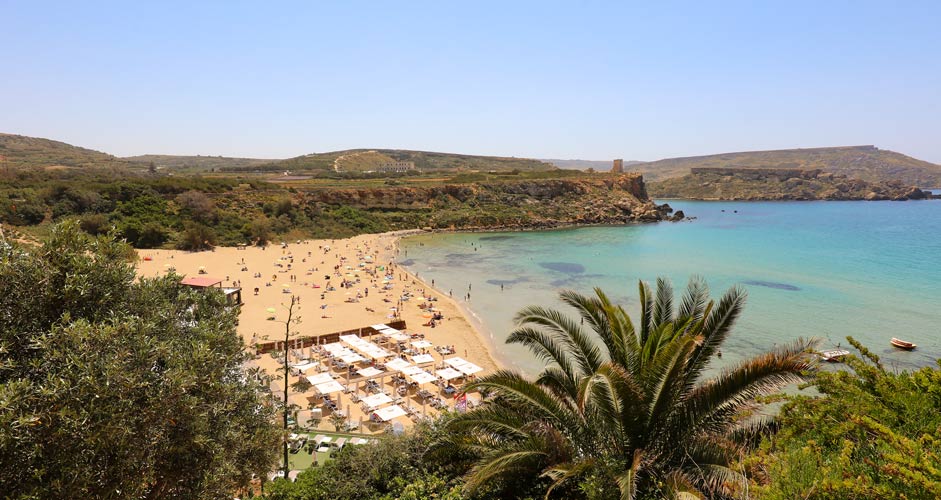 There's a Radisson Spa Hotel right next to the beach and a good selection of restaurants. Golden Bay has also its own diving, snorkeling and water sports equipment rental office. The sea bottom at Golden Bay is from shallow to medium shallow in depth.

There’s a car park right behind the beach. You'll also find an ice cream bar and other basic services there. The closest bus stop is 200 meters away, with an indication “Ghajn Tuffieha”. Check the bus timetables on journey planner. 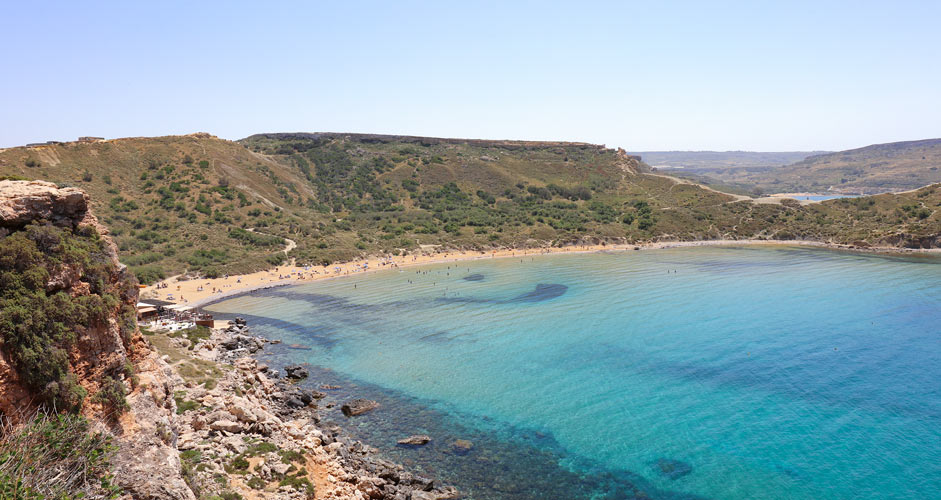 The beach of Ghajn Tuffieha Bay, often referred also as Riviera, is situated very close to Golden Bay, but it’s not as busy as the Golden Bay Beach. You need to descend to the beach via long stairs with over a hundred steps. The services at the beach are limited to a deck chair hire and a snack bar for cold drinks and small bites.

The cliffs on both sides of Ghajn Tuffieha gives you the sensation of being on a deserted island. The sea bottom there is very shallow for a good distance from the shore.

If you get bored of lying on the beach, there are nice trails on the top of the hill that lead towards Gnejna Bay. Between of Gnejna Bay and Ghajn Tuffieha Bay, there’s a long cape with nice views to the surrounding area.

If you hike all the way to Gnejna Bay, you'll face a very steep downhill and warnings of falling rocks, so it's not advisable to walk down to Gnejna Bay.

On the side of the car park up on the cliffs, you'll find the watchtower of Ghajn Tuffieha and ruins of an abandoned hotel. Next to the car park, there’s a bus stop marked as “Riviera”. 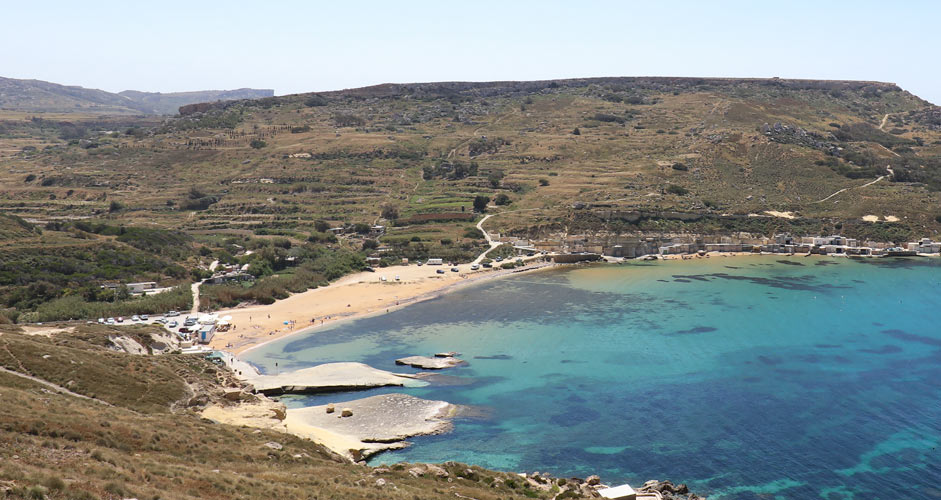 Gnejna Bay is the southernmost beach of the three. The first two are closer to each other and with better bus connections than Gnejna Bay. In fact, there's only one bus line going to Gnejna Bay (101). The bus stop is called Gnejna.

Right behind the beach there’s a car park and basic services, such as ice cream bars and water sports equipment hire office. 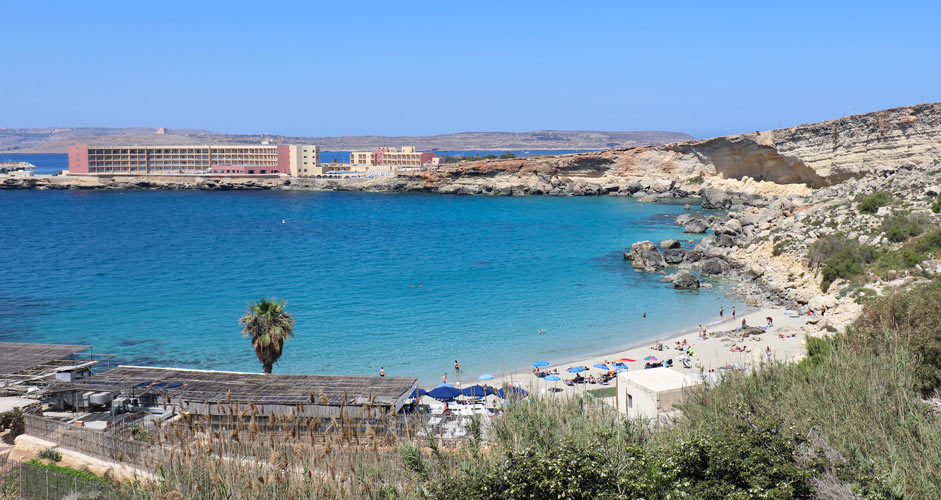 Paradise Bay beach is located at the northern end of Malta Isle, in a small cove opposite to Cirkewwa Ferry Terminal.

There are basic services at the beach, including a restaurant. The closest bus stop is called Paradise. There's also a car park on top of the cliff. To get to the beach, you need to walk down short stairs.

The sea bottom gets deep quite quickly after a few meters. 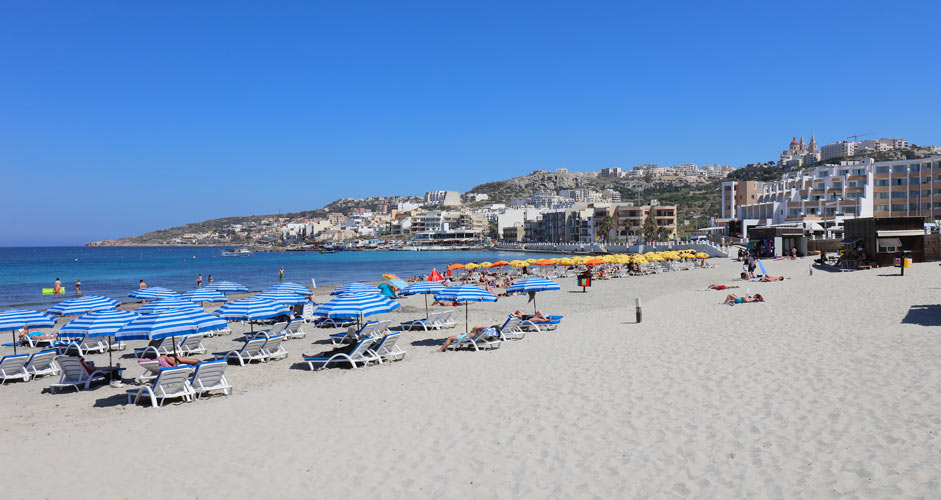 Mellieha Bay, also known as Ghadira Bay, is the most popular and the biggest beach in Malta. The one-kilometer long beach is divided into more peaceful and more active areas.

Mellieha works great for children, since the long bay is shallow and often very calm.

The beach has an excellent selection of services, and there are several bus stops in the area, “Ghadira” being the most central one. 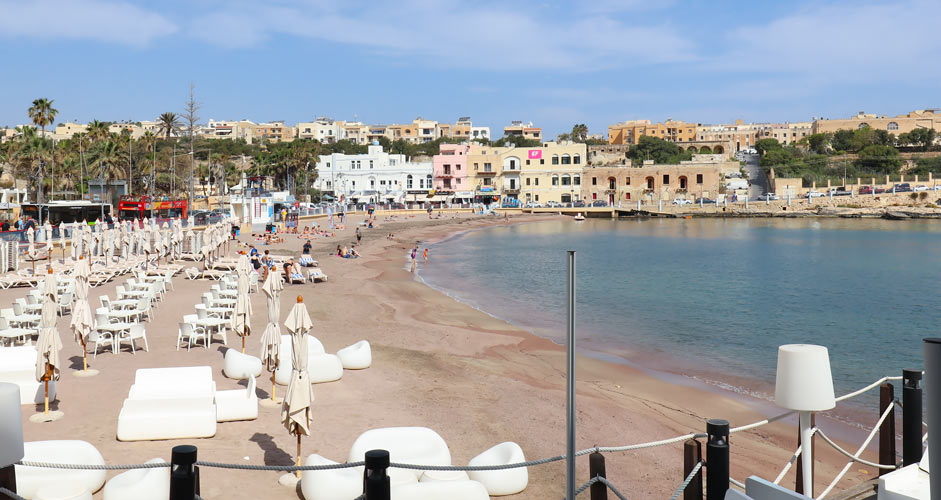 The man-made beach isn't the best choice for children, since it can be pretty crowded and the sea bottom gets deep very quickly. A part of St George's Bay beach is dedicated for the customers of the Beach Club at InterContinental Hotel.

You'll find a hire office for sun chairs and water sports equipment on the northern side of the beach.

Ramla Bay is a golden sand stretch on Gozo island, located outside the holiday destinations. Yet you'll find a good selection of services. You can read more about it in the Gozo guide.

Other beaches in Malta

There are loads and loads of small coves around the island, but a couple of sandy beaches stand out from the rest; Little Armier Beach right on the north coast of the main island and Pretty Bay in the southern part of Malta in the Birżebbuġa area.

The Blue Lagoon on Comino island has a small sandy beach, but the lagoon between the two islands is the reason to go there. You can read more in the Comino guide.