Imagine driving down a serpentine mountain road, with turquoise Adriatic Sea shining bright in the distance - Welcome to Budva!

The tiny town of Budva, surrounded by mountains and the sea, is a great place for a holiday to recharge your batteries. In Budva, you’re in for a great number of sunny days, crystal clear waters and a variety of affordable restaurants, bars & nightclubs to enjoy.

The charming Old Town that was rebuilt stone by stone after an earthquake in 1979 gives a nice contrast to the recently built hotels and shops. 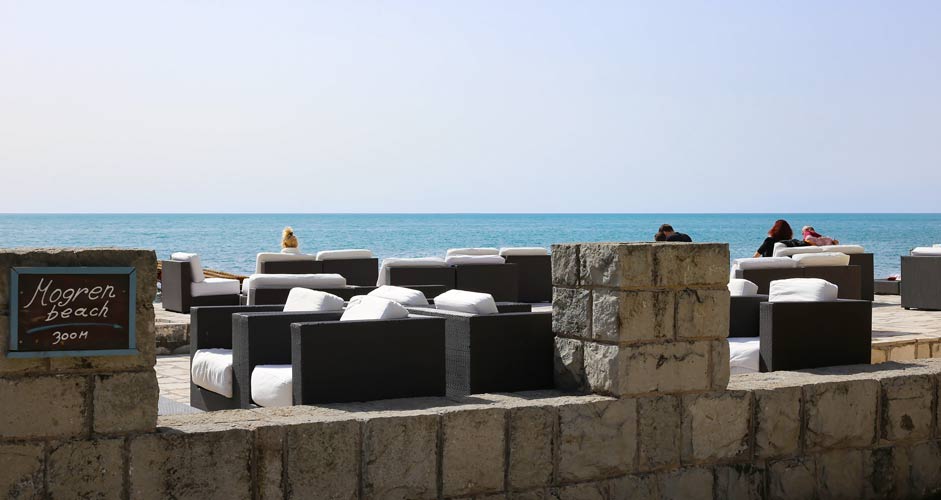 Where to stay in Budva

Most restaurants and bars are situated near the Old Town and the seaside promenade, which is therefore the best area for accommodation. More services and stores are available on the Mediteranska street following the promenade a couple of blocks away towards inland. The landscape begins to ascend rather steeply behind Mediteranska, which is another reason to book accommodation towards the beach from the street.

If the beach life is your main priority, you should consider the neighboring town Becici as well - more information in the beach section.

Things to do in Budva 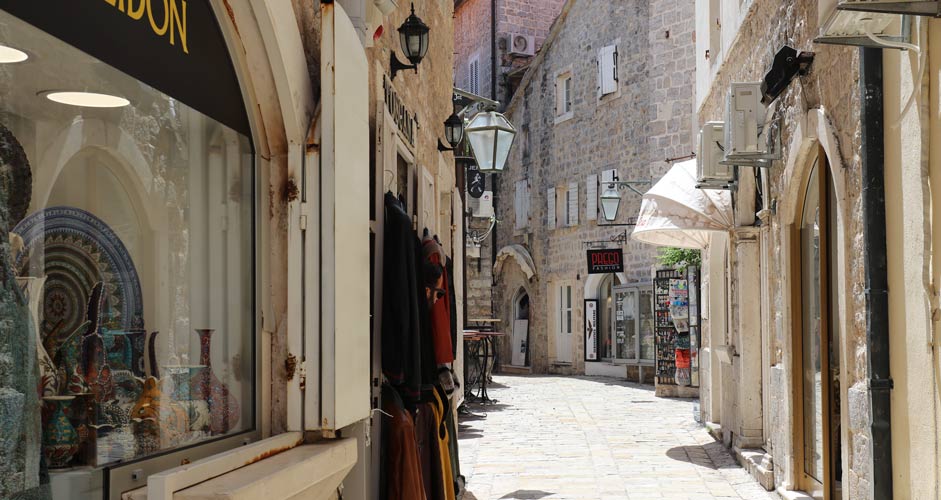 Narrow streets of the Old Town

St. Ivan Church is the most iconic landmark of Budva, rising high in the Old Town. Due to the high Old Town walls and the surrounding crystal-clear waters, there’s a close resemblance to Dubrovnik.

Some sources claim that Budva may even be 2500 years old. Two earthquakes have shaken the Old Town, in 1979 for the last time, after which it was completely rebuilt.

The marble stone streets inside the walls are filled with artisan handicraft shops, jewelry shops, bars and restaurants. Undeniably, the old town is very touristy. Even an Irish bar has found its way into a corner. It’s not a big area, so you’ll get familiar with it in just an hour or two.

The furthest corner of the old town is occupied by a Citadel. For entrance, an admission fee is collected. There’s a ”balcony” in the front tip of the citadel to take unforgettable pictures of your holiday, or to enjoy the great view to Sveti Nikola island. For the same entrance fee, you also get access to a small library. Old Town in the middle, Citadel on the right-hand side

During the summer months, the town turns into a theatre as the Budva Theatre City Festival is opened. This traditional festival has been ongoing for 20 years. There is a big number of performances by domestic and international artists in such fascinating scenery – picturesque squares, churches, ancient basilica, which are all at the very heart of the Old Town.

Museum of the Town of Budva

This museum originates back to 1962 as it started to compile the archaeological collections of materials, discovered on the excavations between 1957 and 1958. The discoveries were exceptionally valuable and rich after an earthquake in 1979, resulting in 2,500 historical artifacts from the Budva necropolis. This massive collection of artifacts from Illyrian, Greek, Roman and Byzantine Slavic times are now on display in over 4 stories in the museum for the visitors to admire. 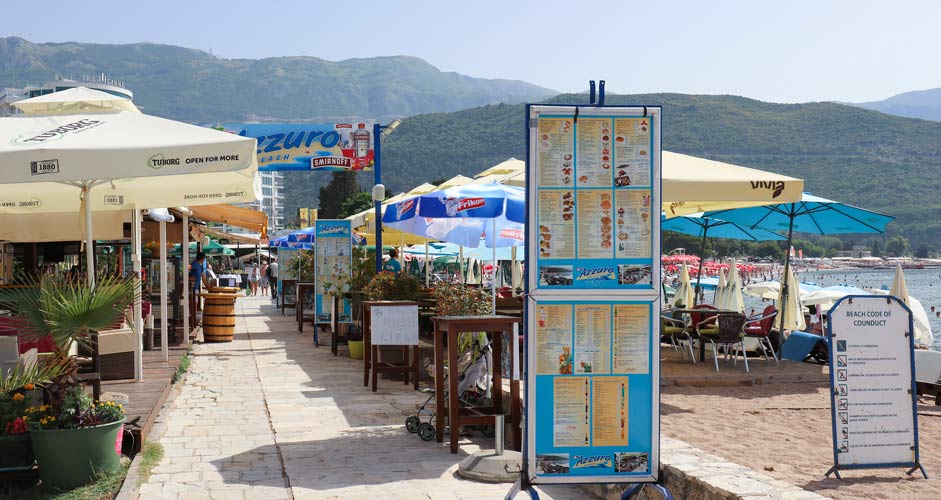 Slovenska Plaza and the promenade

The 1,6-kilometer-long narrow gravel beach, Slovenska Plaza, begins by the Old Town and Dukley Marina and covers the entire Budva bay. The narrow promenade adjacent to the beach contains a wide selection of restaurants, which are open all day but get busy later in evenings – by sunset at the latest.

The beach is divided into sections. The selection of services and water sports is excellent. 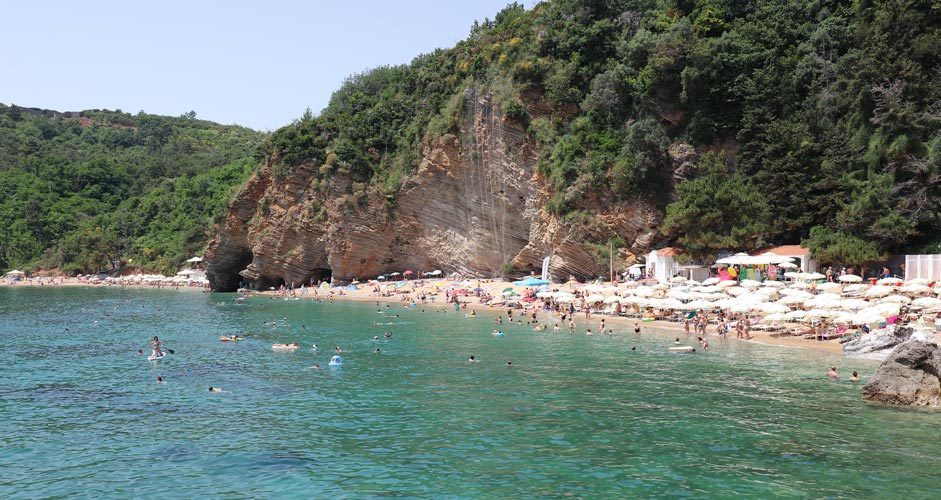 The narrow Mogren beaches 1 and 2 are confined within tiny coves at the foot of a mountain covered with pine trees.

These popular beaches are easy to swap back and forth via a tunnel in the rock. While the sand/gravel of Mogren 2 is rather coarse, Mogren 1 has slightly finer sand. 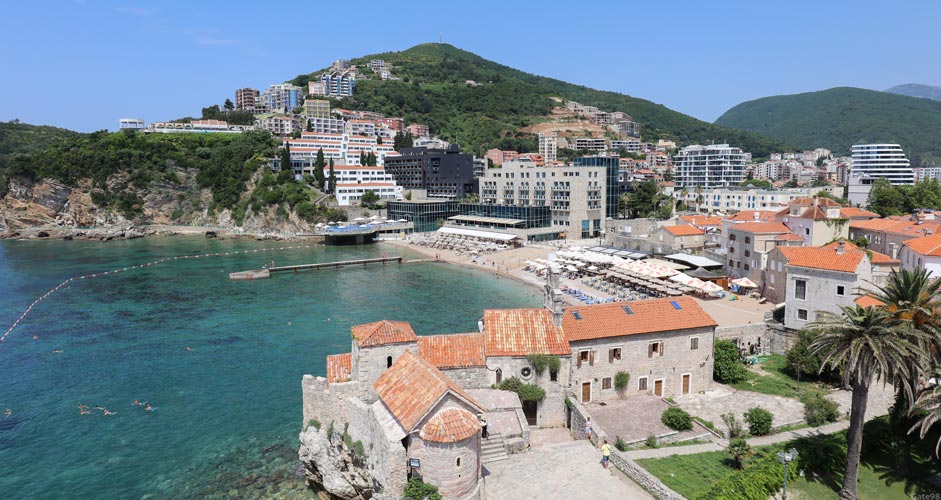 The Old Town beach is situated behind the Old Town walls towards the west. The beach stretch is rather small and packed with beach chairs and restaurant tables in the summertime. Gradska plaza is a gravel beach with pebble stones. 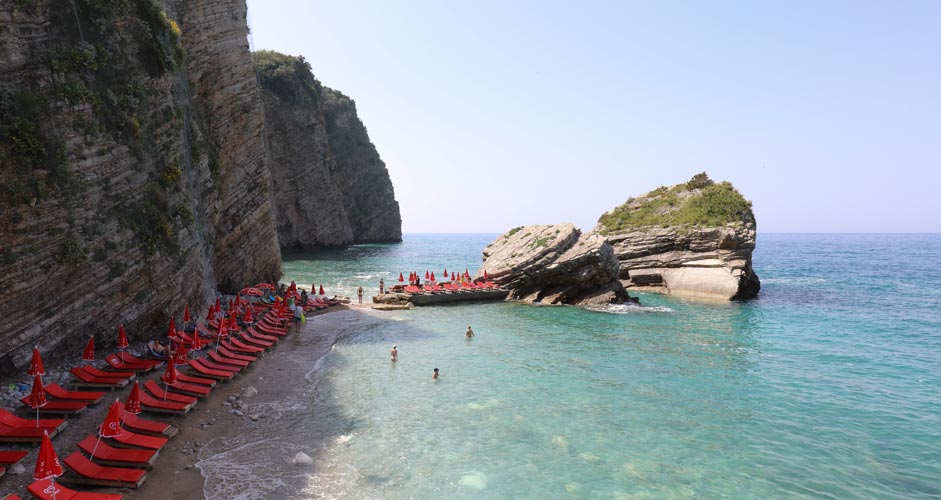 Sveti Nikola was under renovation in June 2019

Sveti Nikola island is a 10-minute boat ride away from Budva. The island holds a couple of restaurants and several pebble beaches.

The almost two-kilometer-long island is mostly deserted, (except for deer and other animals). The beaches and the harbor are facing Budva on the northern tip of the island.

Water buses provide transport from the concrete piers of Slovenska Plaza every half hour / every hour, and the return schedule is displayed at the Sveti Nikola pier. Obviously, you should check the final departure for the return leg, or you might be in for the night on the island. In 2019, a two-way connection cost 4 euros. Especially in Dukley Marina, there are plenty of private boat services, which can take you to the island and nearby surroundings for a negotiable price. While Budva has gravel and pebble beaches, the closest sandy beaches are found east of Budva, in the town of Becici. The Becici beach stretch is equally long but much wider compared to the beaches of Slovenska Plaza in Budva. The sand varies from very fine to slightly coarser. The waterline is composed of pebbles.

There’s a seaside promenade following the Becici beach with restaurants and bars along the way. The beach is divided into sections with a couple of them belonging to private hotels. The possibilities of water sports on offer are excellent.

From the eastern end of the main beach of Budva, it’ll take about 15 minutes on foot to get to the Becici beach. Follow the seaside promenade and an underpass through the mountain, and finally go around a hotel building to get there.

All beaches in Budva have very clear water, and they tend to get deep rather quickly.

Jaz beach is a large beach located a few kilometers west of Budva, while Sveti Stefan is a small and popular destination, located about 10 kilometers south of Budva.

There are several small boutiques in the Old Town. More modern stores can be found along the Mediteranska street and the small TQ Plaza shopping center at the end of it. There's an indoor marketplace behind TQ Plaza, selling everything from vegetables to wine and liqueurs. 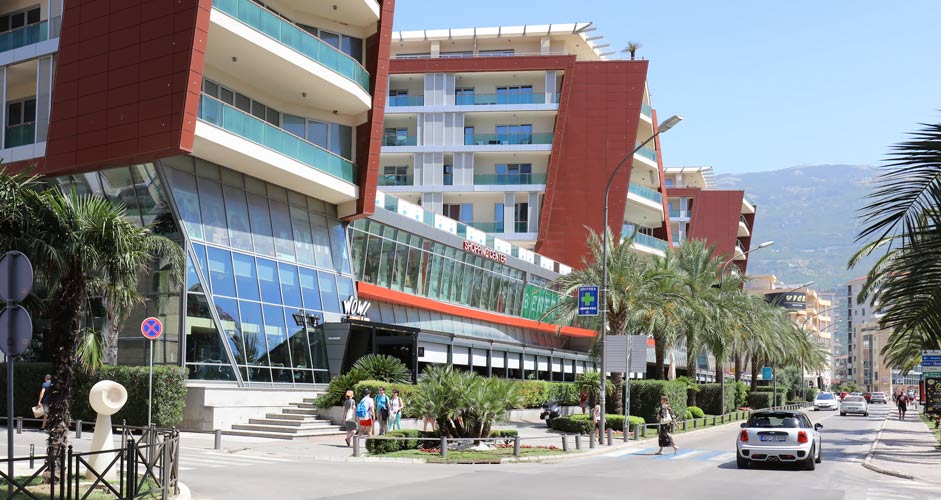 TQ Plaza is the largest shopping center in Budva 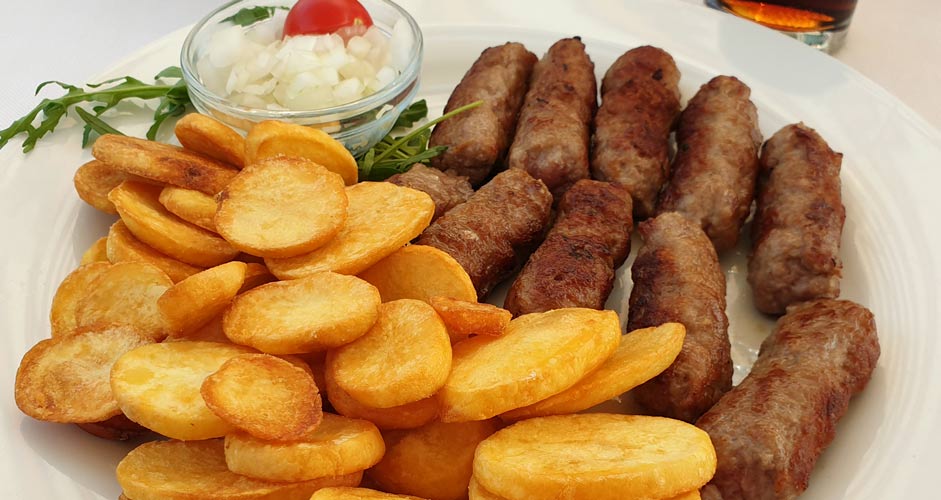 Ćevapi, grilled meat often served with french fries or bread and always with raw onion, is a tasty and affordable dish all over the Balkans

Compared to elsewhere in Europe, the price level in Montenegro is below the average, which is why Budva is an attractive destination especially for low budget holidays. The essentials of travel, such as prices of food & drinks in restaurants and hotel accommodation, are quite affordable in Budva.

Hotel prices jump up in May as the high season starts and holidaymakers start flocking in.

Below, there are some examples of restaurant and hotel prices in Budva. Costs of hotel rooms are median prices at Booking.com.

Taxi: A taxi trip from the airport costs somewhere between 19-30 euros, depending on your negotiation skills. It’s advisable to order the taxi in advance and get the price fixed. This way you should get a taxi for 15 euros. A taxi journey from Tivat airport to Budva takes approximately 25 minutes.

Public bus: There are no public buses or shuttle buses available to Budva directly from the airport. Instead, you have to walk 500 meters to the highway Jadranska magistral and catch a bus from there. The buses go every 30-45 min past the airport and cost only 3-4 euros. You can check schedules from Getbybus. The bus takes you to Budva bus station which is about 15-minute walk away from the Old Town.

Taxi: A taxi trip from Podgorica airport to Budva costs around 40-60 euros. Here again, it’s advisable to order the taxi in advance and get the price fixed for 40 euros. The journey takes around 70 minutes.

Budva is surrounded by the sea and mountains, which makes the climate slightly warmer than in the capital Podgorica, that is located at higher altitude. 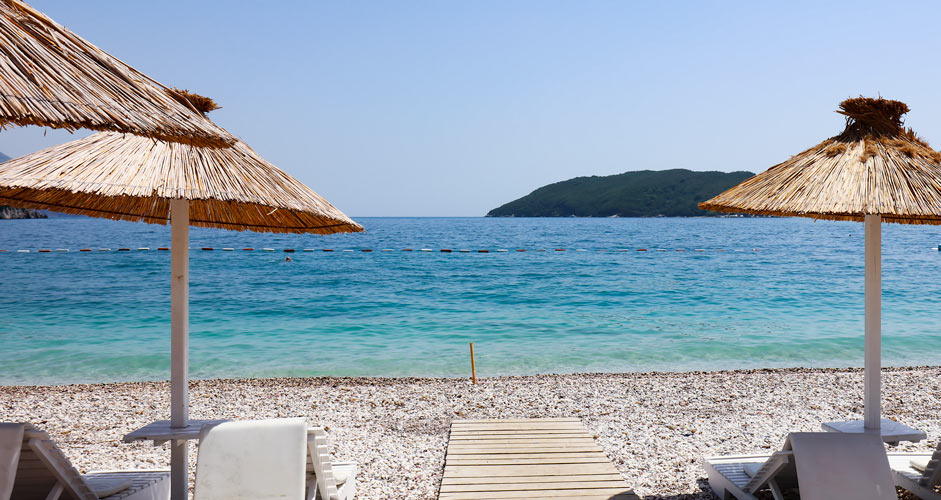 Winter: The average winter temperatures are mild, about 10°C during the daytime. It’s still breezy in the evening, and the night-time temperatures may drop below zero. It rains quite often in winter.

Spring: In March and April, the temperatures can rise to 20°C and even above. You still need a jacket in the mornings and evenings. The sea is still too cold for swimming, unless you don't mind cold temperatures. It rains less frequently than in Winter. In May, there are already beach temperatures, and the thermometer climbs easily over 20 °C daily.

Summer: June is probably the nicest month for a visit. In June, temperatures climb often to 30°C, but not much over it. July and August are the hottest and driest months, and the shade temperature can be close to 40°C.

Autumn: Early autumn is still very warm, and the beach season continues till mid-October, after which temperatures begin to drop to 20°C and below. The average rainfall increases the further you go into the autumn. November is the rainiest month of the year in Budva.