The golden beaches of Espinho by the Atlantic Ocean provide a marvelous setting for a holiday by the sea. Thanks to the location by the Atlantic, the air and seawater remain cooler compared to the Mediterranean. The beaches are highly popular among sunbathers. The multi-kilometer long shoreline contains different areas ranging from busy Praia de Baía to nearly deserted beaches of the south.

Espinho is also a popular surfing destination, where surfers gather to catch the big whitecap waves of the ocean.

The wine coolers and emerald green vinho verde bottles sparkle in the seafood restaurants of the beach promenade, and the fresh and delicious seafood provided by local fishermen go perfectly with the wine. Enjoy life by the sea all day long in Espinho! 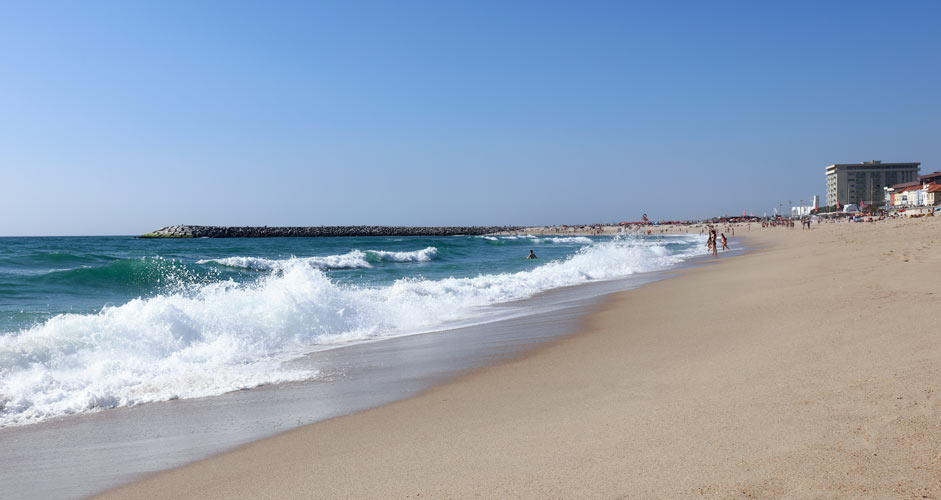 The central areas are defined by the city’s golden circle: the Praia da Baía beach, the train station and the João de Deus park. This area contains the best selection of restaurants and bars, the most popular beach and the finest adult playground in town: Casino Espinho.

In the south, the town areas as well as tourist services end by the fishing village Bairro Piscatório. Towards the north, the most interesting town areas run out by the height of the Praía de Baía beach. The beach itself continues far to the north, though.

Things to do in Espinho

Mercado Semanal, the weekly market, is held in an area called Feira Semanal de Espinho every nonholiday Monday between 7 A.M and 7 P.M.

This three-block-long row of booths contains everything from household appliances to leather jackets. Bear in mind that they sell living ducks in cages, among other things, which may come across as a bit of a culture shock. 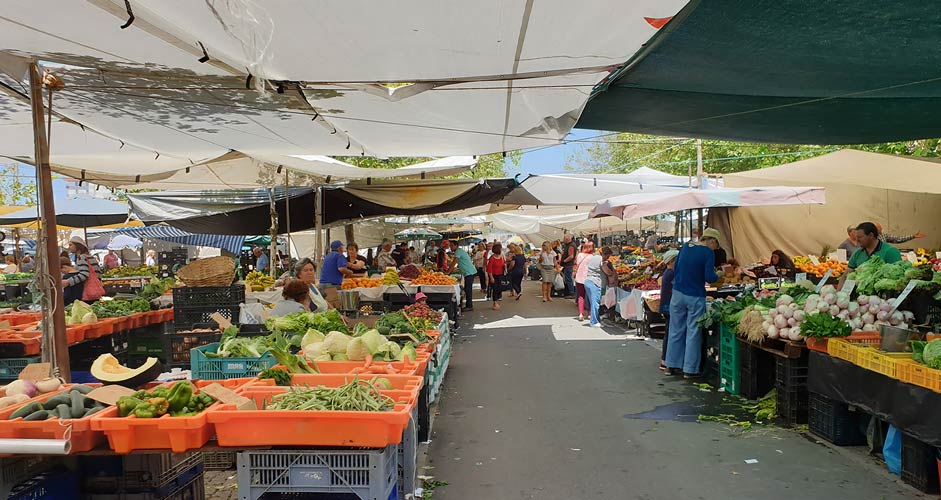 The Municipal Museum of Espinho leads you to the history of the fishing village, which really goes hand in hand with fishing. The museum houses long lasting exhibitions of a local cannery and the way of life of fishermen. There are also changing exhibitions with random themes.

This multimedia center is a planetarium, an observatory and a cinema simultaneously. Being the most advanced planetarium of Portugal, the center has plenty to discover for the whole family.

The casino, opened in 1974, is the most famous amusement center of the area. The casino contains several restaurants and a good selection of boardgames, poker tables and slot machines. Dress code: Smart casual.

If you’re tired of cleaning sand from your skin but want to continue swimming, you should head to the swimming pools of Piscina Solário Atlântico. There are both indoor and outdoor pools, and the water is taken from the sea. For a small fee, a sauna and other services are also available. 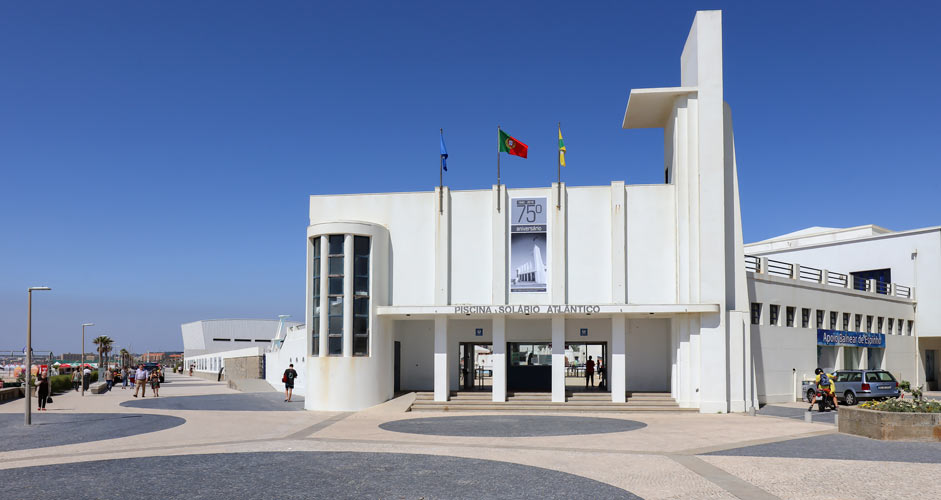 The large whitecap waves of the Atlantic Ocean attract surfers to Espinho all year round. There are many equipment rental shops and surfing schools for learners of all skill levels.

Oporto Golf Club, in operation since 1890, is situated in a great setting by the Atlantic Ocean, just three kilometers from the center of Espinho. The golf club was founded by British port wine manufacturers. Originally the course had only nine holes, but today it’s a full 18-hole course with par 71. 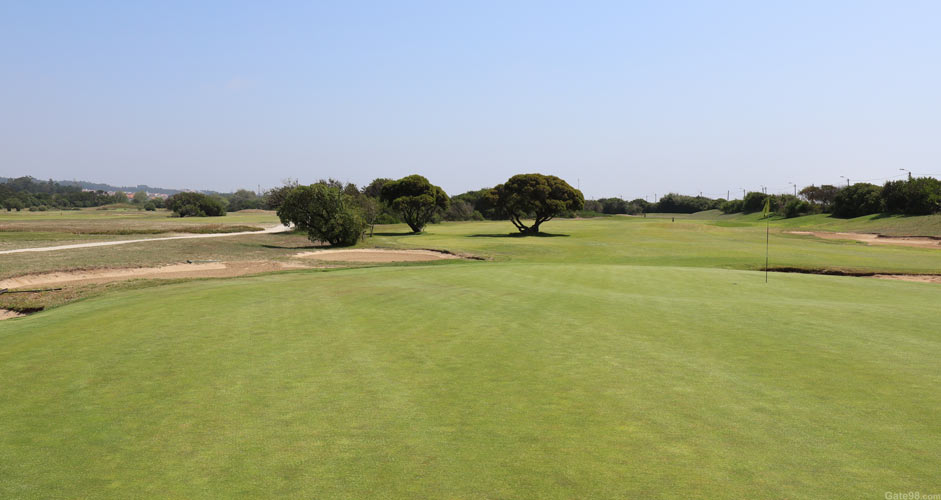 The long shoreline begins several kilometers before the town and continues far thereafter. The beaches are mostly wide with quiet areas included, and hence everyone’s guaranteed to fit in.

The northernmost beach, Praia Azul, is situated a short distance away from central areas. The beach is especially popular among swimmers as well as beach soccer and beach volleyball players. 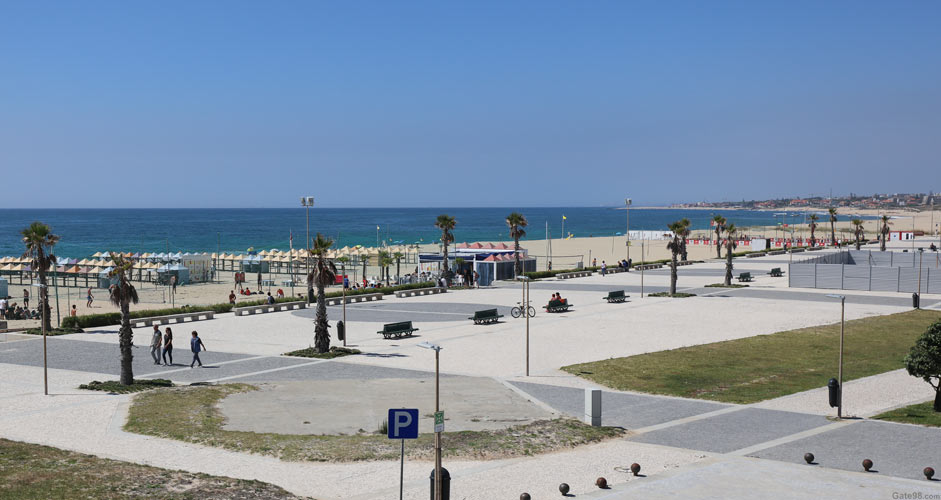 Praia da Baía, in front of the casino, is the favorite beach in Espinho among both tourists and locals. The beach has several bars, and the pedestrian street next to it contains a wide selection of restaurants. 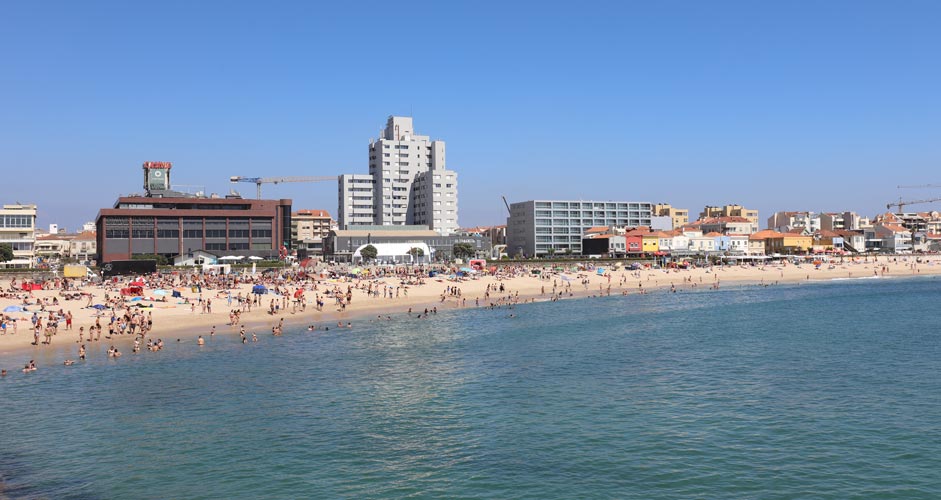 This beach in front of the Fishermen's District begins where the center ends. Having unloaded the day’s catch, fishermen leave their colorful boats on the beach for the next day. There are a couple of bars behind the beach, where you’ll be pretty sure to find a few fishermen cooling off after a hard day’s work. This deserted beach has no lifeguards. 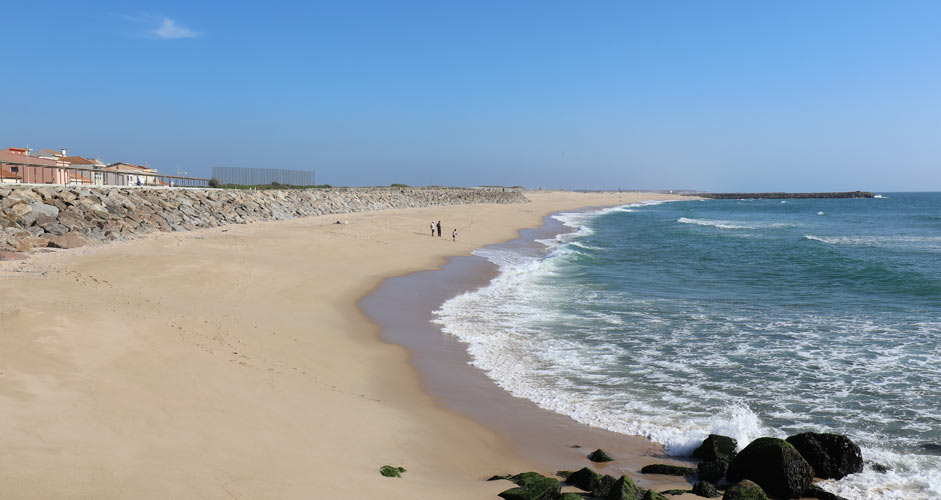 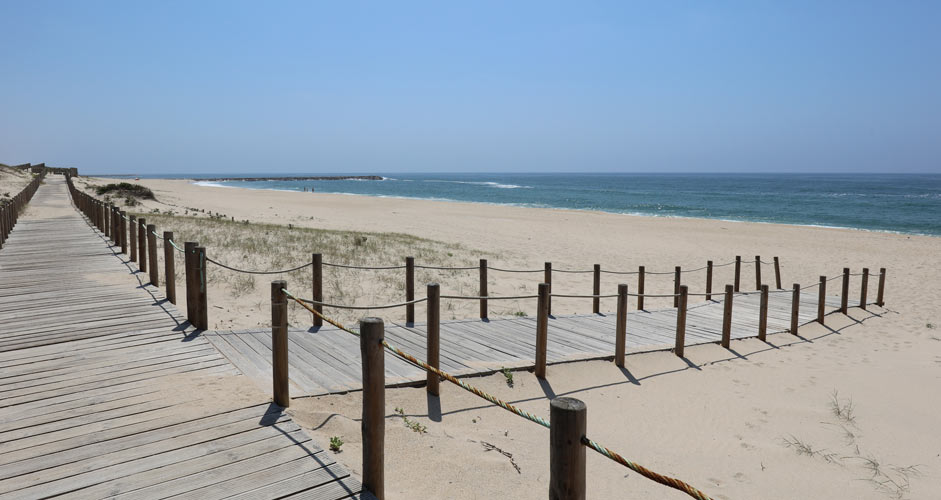 There's lots of room at Praia de Silvalde, even in July

The local cuisine of Espinho consists solely of seafood. Chefs carry on local traditions in kitchens, some of which are over a hundred years old.

Even today, the Espinho shrimps, camarão de Espinho, are well known around Portugal. Fresh grilled sardines or flounders are sure to be available every day of the week. On a hot day, a light fish soup, sopa de peixe, or rich fish and potato stew, caldeirada, taste delicious with light vinho verde.

Shopping possibilities are reasonable, but for a whole day of shopping, you should head off to Porto some 30 minutes away. The main shopping street Rua 19 and its back streets contain a good selection of clothing, shoe and handbag stores.

If you’re around on any Monday, try making some good finds on the large marketplace of the town. Popular local souvenir specialties include canned sardines and port wine. 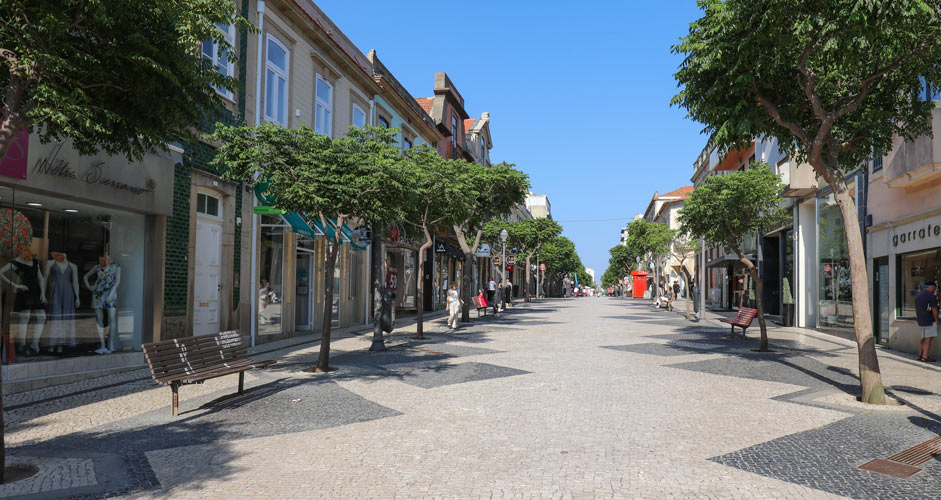 The costs of travel essentials such as accommodation, food and drinks are below the average of any country in the European Union. While the prices of hotel rooms have been on the rise during the past few years, food is still affordable in Espinho; you can find lunch menus for just six euros.

From Porto Airport to Espinho

Porto Airport is situated about 23 kilometers away from Espinho. The most convenient way to travel is by taxi or Uber. The cost of an Uber ride is about 24-45 euros, depending on traffic congestion. Uber works very nicely in Porto Metropolitan area.

An alternative route is to take the metro from Porto Airport to the Campanha railway station, and then to continue by train to Espinho. Since the airport is the terminal station of the E-line, there's only one line and direction for departing metros.

However, the end station of the E-line in Porto is Trindade, which is situated shortly before the city center. Therefore, you need to change the metro lines at some point to get to the Campanha railway station.

The map of the metro is shown here. 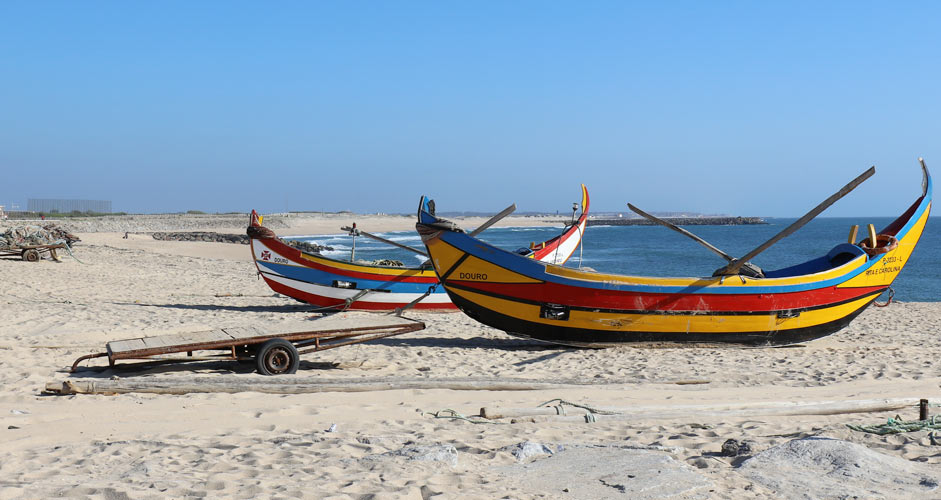 Espinho comes to life in summer. The rainfall is very scarce in summertime, especially between July and August. On the other hand, it rains a lot in autumn, winter and spring. Hence, there’s no point in traveling to beach destinations of Northern Portugal outside the dry summer months.

The cool Atlantic Ocean chills the coastal air of Portugal, making it milder compared to inland. Very rarely does the temperature reach +30°C in Northern coast of Portugal, and instead +22-25°C are typical. At night, temperatures drop to about +15°C, and warm clothing might come in handy in the evenings, even in midsummer.

Seawater doesn’t reach +20°C, not even late in summer. Instead, it remains between +16-18°C all summer long.

Due to strong winds and currents, Espinho is not recommended for children. Instead, it is a fantastic destination to enjoy life on beautiful beaches in a pleasant climate.

All destinations in Portugal