Kotor is without a doubt one of the most interesting destinations in the Balkans. The ancient Old Town with its cozy alleys and squares is encircled by sturdy, well-preserved stone walls. The history of Kotor dates back all the way to the Roman empire. To underline its rich history, the Old town has been inscribed on the world heritage list of UNESCO.

The surrounding mountains and the fortress overlooking the town provide a wonderful contrast to the picturesque scenery of the Old Town.

Today, just like Dubrovnik in Croatia, Kotor is an increasingly popular destination for cruise liners bringing large crowds to the town momentarily. While this showcases the popularity of Kotor as a holiday destination, the narrow allies and tiny squares may feel rather congested at times. 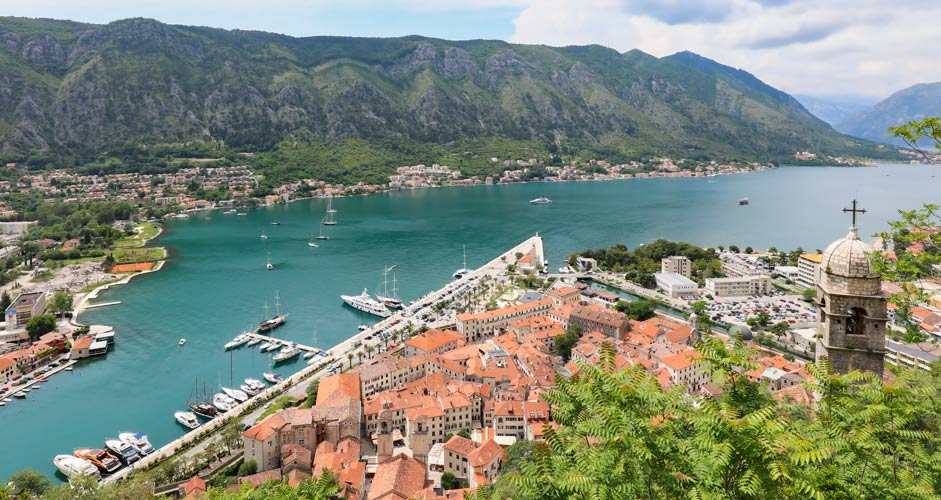 The Old Town is an obvious choice for accommodation, as it contains most of the attractions and other interesting places of the town.

If you want to stay outside the Old Town, the Dobrota area towards the north with its beach promenade and restaurants, is more comfortable than the other side of the bay.

The bottom of the bay is also a suitable choice; it contains some services, such as a bus station, and it’s just a short walk away from the Old Town.

Things to do in Kotor 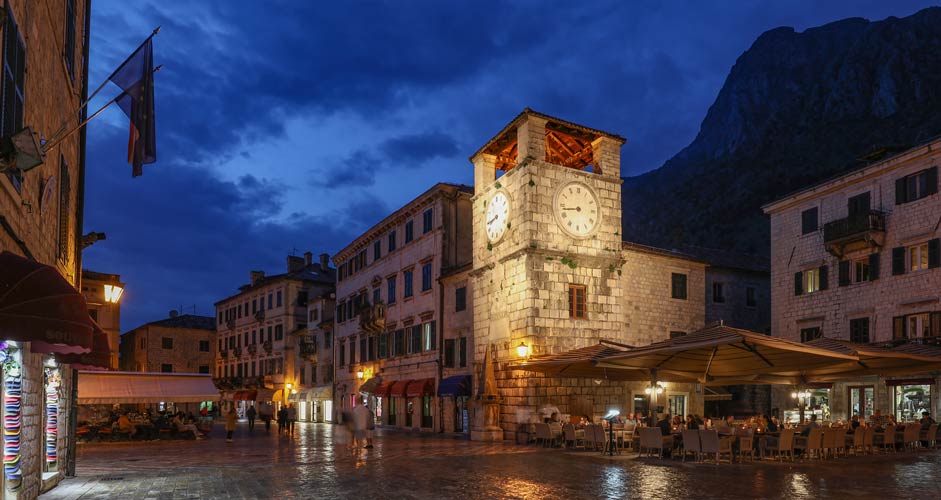 The Old Town of Kotor is situated on flat ground. The area is characterized by streets and squares surrounded by terraces of restaurants and cafes. There are also plenty of churches and small boutiques around. Therefore, even though the Old Town is spread over a concise area, you’ll have no trouble spending a day there just strolling around the area.

The western wall and parts of the northern wall allow access to the top with a view to the surroundings. However, the view to the Old Town is partially blocked by buildings. The easiest way to ascend to the walls is via the main gate (the western gate); having passed it, turn to the left and walk for a couple of minutes past the terraces, until you reach the stairs. There’s no entrance fee. 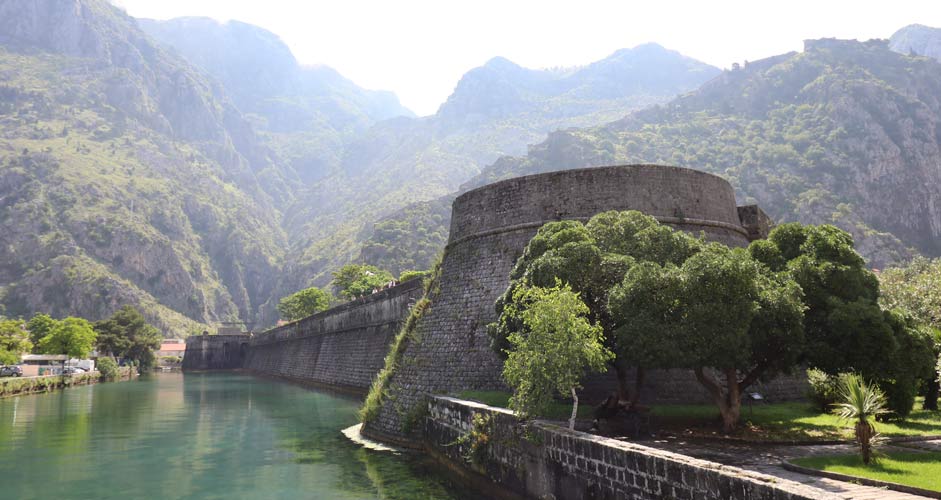 The fortress is referred to as St John's Fortress, Castle of San Giovanni or Kastel Sv. Ivan. The fortifications constitute a complex of walls and fortresses on the side of the mountain right above the Old Town. The view to Kotor bay is magnificent.

There’s a long walk to the top via stairs (over 1 300 steps in total) or adjacent cobblestone pathway. The route is convenient to walk until the fortress but bear in mind that the stones have become slippery over time; you might run into trouble with slippery shoe soles. 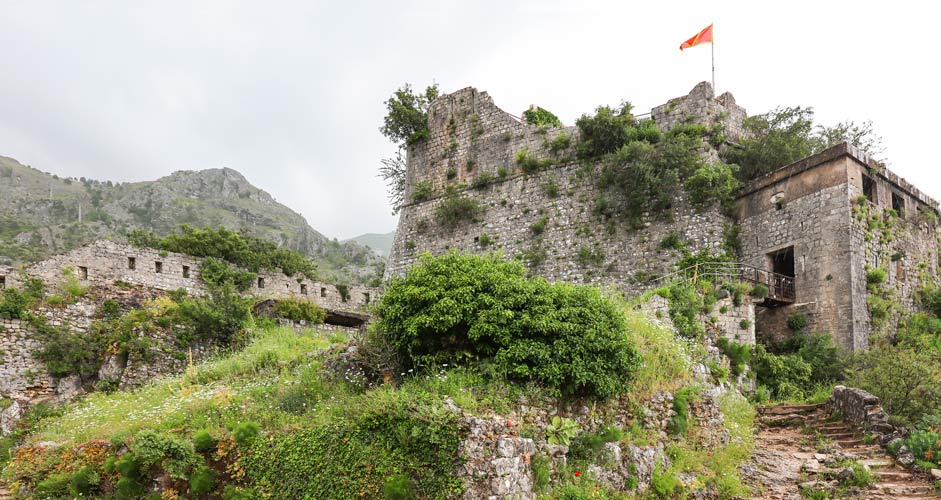 St John's Fortress is situated on a mountain above Kotor

There are two starting points from the Old Town, which join together after a short walk. The route starting from the northern gate is easier to find. The other route begins some 100 meters north of the southern gate. Both have signposts.

The entrance fee is 8 euros per person (in 2019), which is collected after a short walk on both routes. Halfway to the fortress, there’s a small church. The route continues after the fortress all the way to the top of the mountain.

There are three gates to the Old Town: 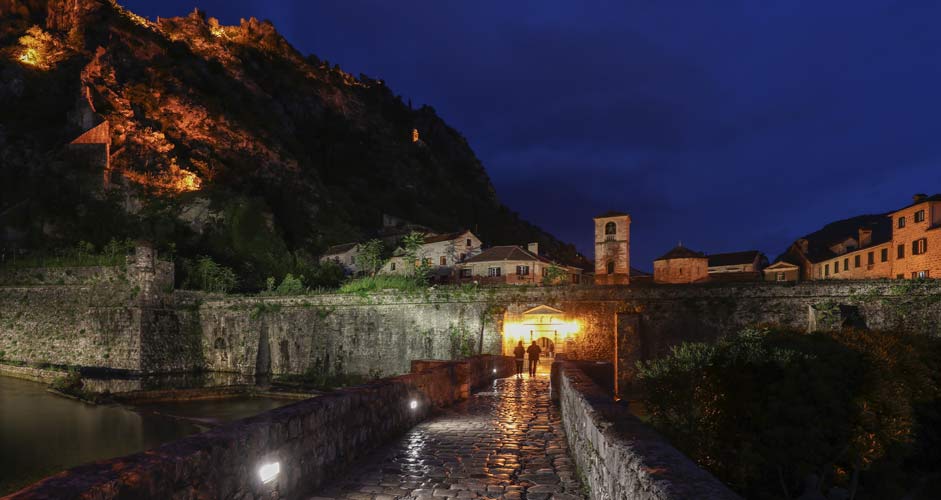 The Maritime Museum of Montenegro in Kotor is housed by the Grgurina family palace, which contains miniature models and equipment of ships, weapons, paintings, furniture, clothes etc. in three floors. Since maritime activity has such a strong status in the history of Kotor, the museum could be considered, not just a maritime museum, but a town museum instead.

The entrance fee includes a device for listening commentary on e.g. the history of the town in each floor of the museum.

Location: In the middle of the Old Town, picture 8.
More information: museummaritimum.com

The Old Town contains many churches, most of which can be visited free of charge. 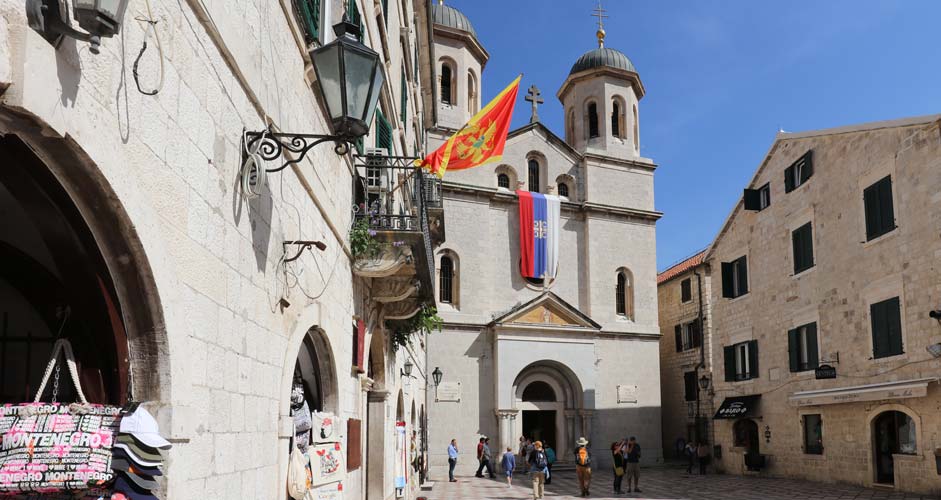 By the Old Town walls, there are plenty of boats ready to take tourists for a cruise around Kotor bay. The direction and time of the cruises are up for negotiation. One of the main targets is the island church in the middle of the bay, from which there’s more information in our Perast article.

Some 500 meters north of the Old town, there are a couple of gravel beaches, which are suitable for sunbathing. The bottom of Kotor bay has some seaweed and plastic garbage, which may be of inconvenience when swimming. 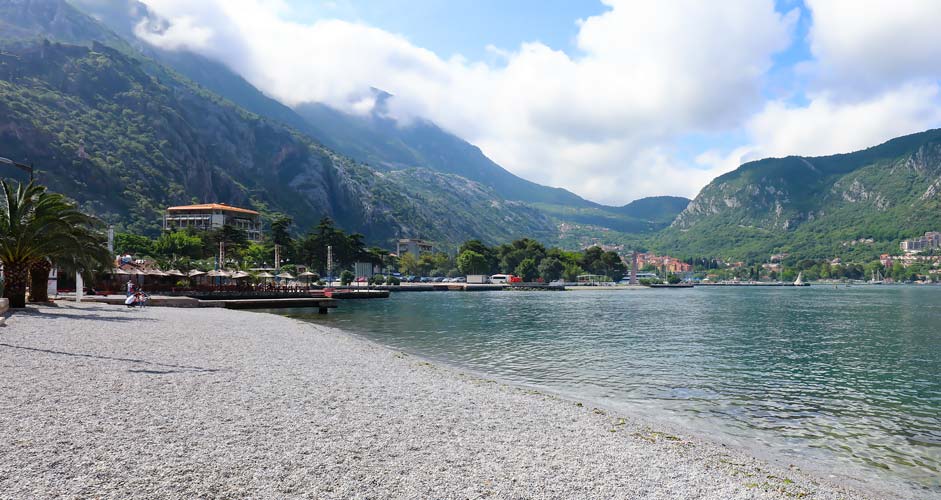 Gravel beach on the northern side of Kotor

The best venue for spending a day on the beach is Plavi Horizont (Blue horizon), also known as Przno Bay. This secluded bay is situated 11 kilometers away from the town and easily reached by a taxi. The beach has fine sand and shallow, bright water. It’s a very popular beach among the locals, too, and gets busy in July – August. There’s a restaurant behind the beach. 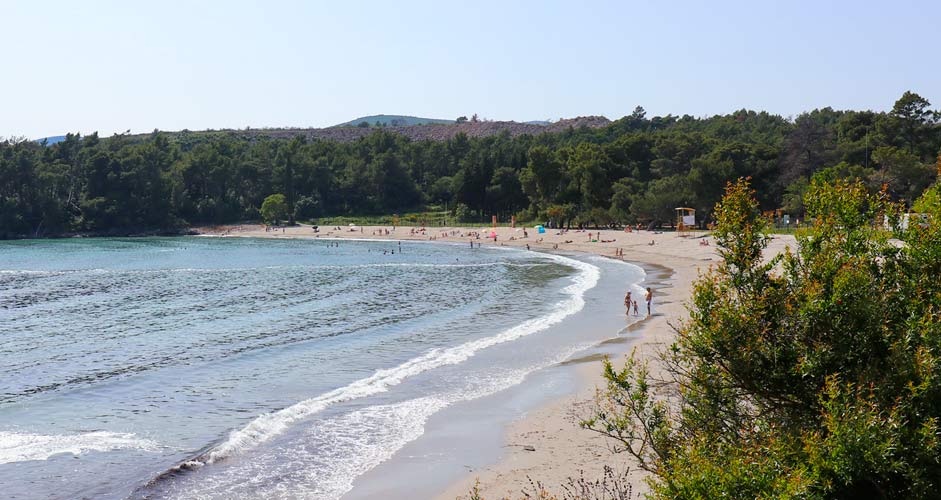 Budva beaches are situated a bit over 20 kilometers away. 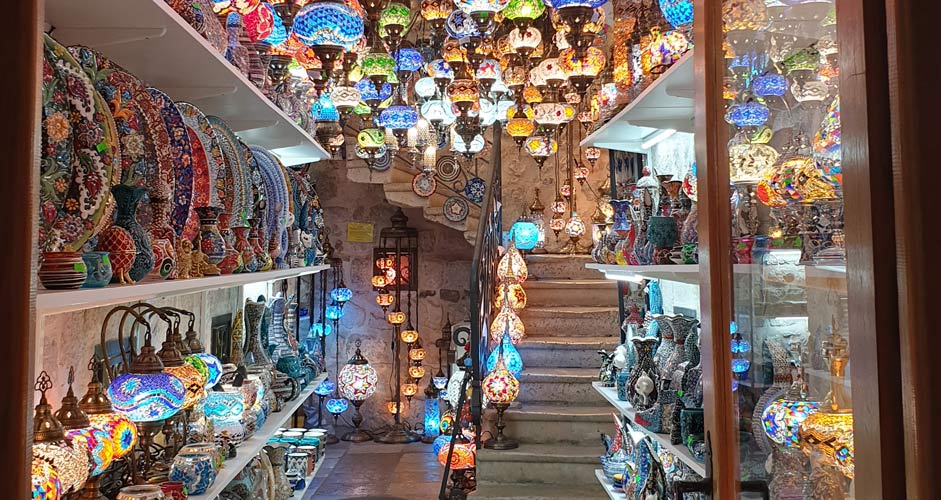 Colorful lamps are a popular souvenir from Kotor

Below, there are some examples of restaurant prices. Due to the popularity of Kotor, the prices are somewhat higher compared to other destinations of Montenegro. Cheap clothing may also be difficult to find.

Tivat Airport is situated some 8 kilometers from Kotor.

The airport of Podgorica, the capital of Montenegro, is 86 kilometers away. The distance to the airport of Croatian Dubrovnik, or Čilip, is 80 kilometers.

When using the airport in Croatian Dubrovnik, bear in mind that you have to cross the border, which may take from just a few minutes to 2-3 hours. (In June of 2019, a new point for border crossing was opened, which should reduce queues). Moreover, when flying to Croatia, consider combining Kotor and Dubrovnik into one holiday and visit both of them. Having Dubrovnik on your itinerary right before the return flight saves you from crossing the border on your way to the airport. 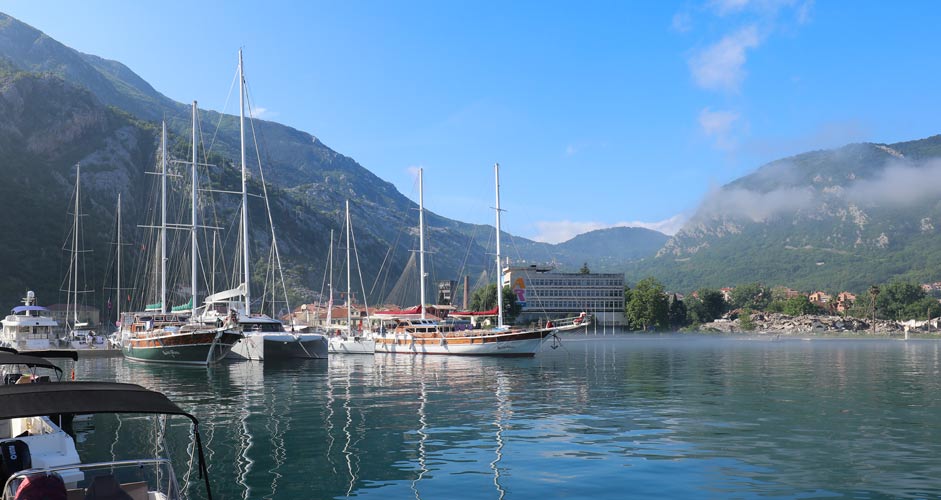 Spring: In March, it rains less, but temperatures are cool. In April, 20 °C is exceeded often, and in May regularly, but evenings remain cool. It should be noted, however, that the weather can be very unpredictable in spring, and the daily high temperature can be anything between 15-32 °C.

Spring or fall might better than summer for traveling to Kotor, since it's a very busy destination also among the large cruise ships, which can make the narrow streets of the Old Town extremely crowded during the high season.