The sea, sunshine and a luxurious marina within a traditional Montenegrin town. In a nutshell, this is what Tivat and its marina, Porto Montenegro or “the Monaco of the Balkans”, are all about.

This holiday leads you to two completely different worlds. While Tivat flourished in the 19th century, the Dubai-owned Porto Montenegro is as modern as it gets. As they are situated side by side, it’s easy to stroll around the town and enjoy the seaside cafes.

What’s more, you can also hit the beach in Tivat, and the rest of the Kotor Bay destinations are close by. 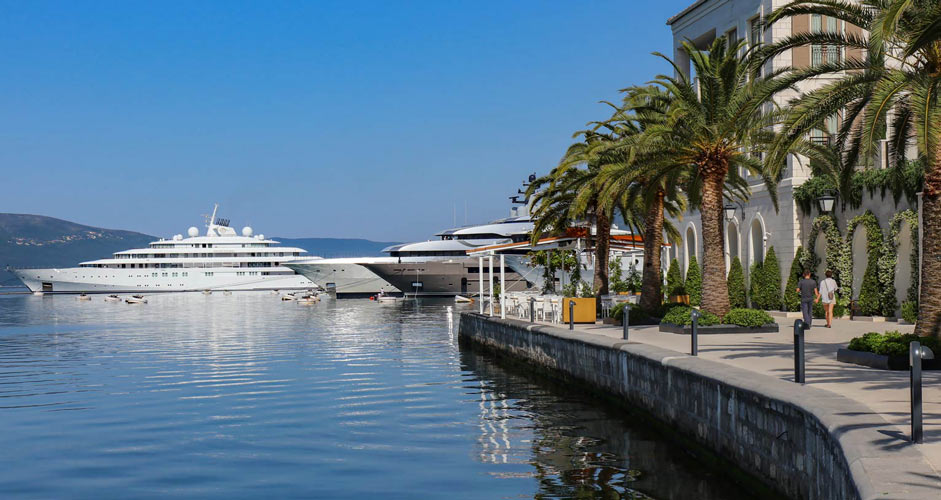 The very center of Tivat is the seaside promenade Obala maršala Tita. If you walk along the shore towards the north, you’ll reach Porto Montenegro right away. Therefore, the most central area to pick a hotel is somewhere near the promenade.

Bear in mind, however, that it might get noisy there in the evenings. Hence, do consider bringing earplugs with you just in case, if you accommodate along the promenade.

Slideshow of Tivat and Porto Montenegro

Things to do in Tivat

The marina is packed with luxurious yachts and smaller boats. The streets behind the marina are very well maintained with palm trees and other plants everywhere.

Porto Montenegro consists mainly of residential apartments. The area also contains restaurants, clothing stores, a hotel and a school. It’s like a small town within a town, just a few blocks in size.

It's convenient to stroll around the area, and you can move freely in parts of the marina as well. 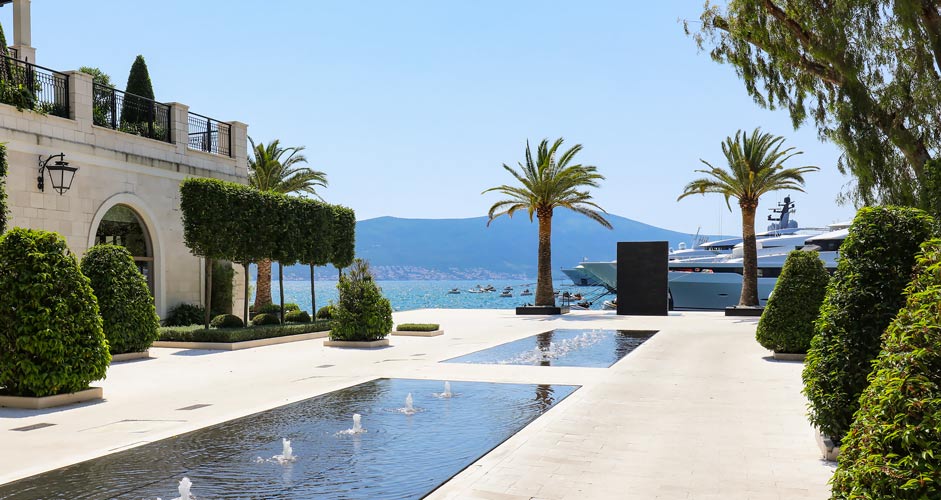 There was a significant marina already in mid-19th century, as the Austro-Hungarian Empire used it as a naval base until the First World War. Later, it served as the main naval base for the Yugoslav People's Army.
For several decades, the marina housed the Arsenal shipyard, which made Tivat a financially significant town in Montenegro. As Arsenal was shut down in 2007, the construction of the present marina was commenced. It was Canadian-owned initially but sold to Dubai later on.

The seaside promenade of Tivat is short and busy. The row of restaurants begins to fill up towards the evenings with adults having dinner and children playing their games. The promenade is a well-suited area to head for a dinner. 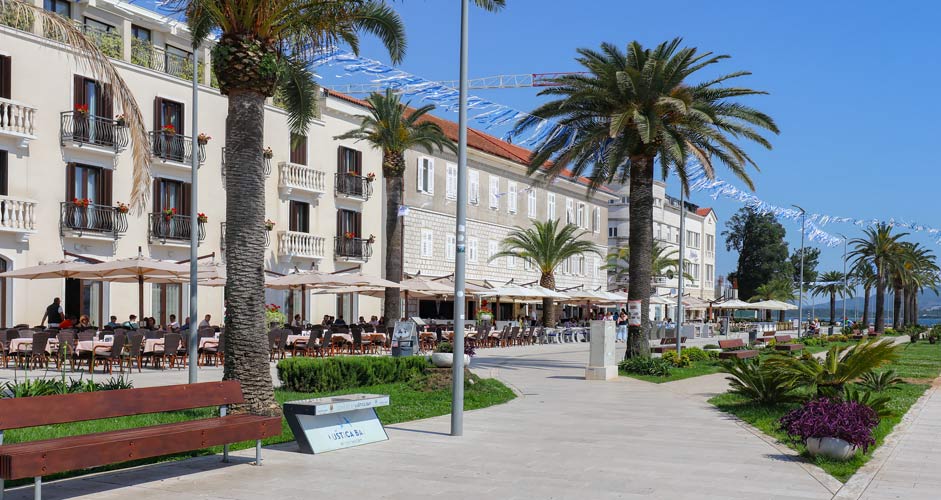 The Maritime Museum, officially known as Naval Heritage Museum, is situated north of Porto Montenegro. The Maritime Museum contains old maritime equipment, such as heavy diving suits, and an exhibition concerning the history of the port.

In front of the building, there are two submarines from the Yugoslavian era. For an additional fee, you can go inside the larger one. 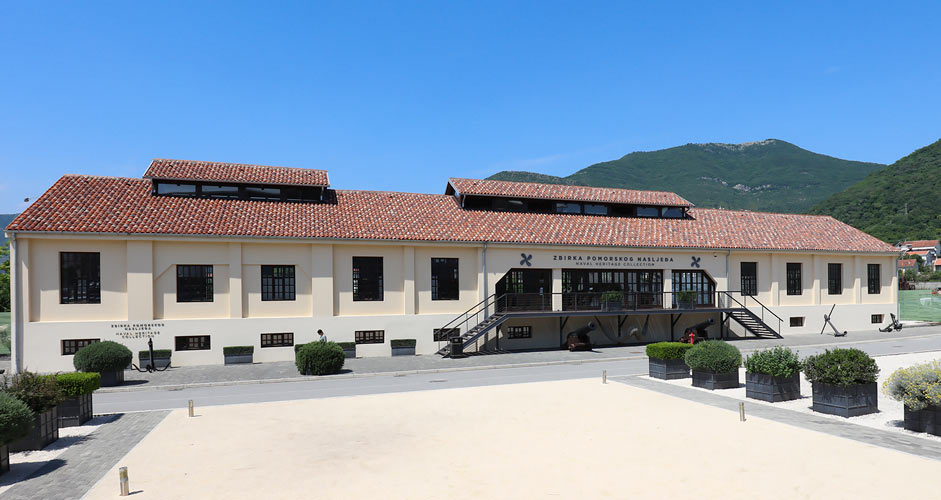 Buća-Luković Museum and Gallery contains a small museum and changing galleries in two stories. In the inner yard, there’s a small chapel. The museum is constructed into a Venetian era palace that belonged to Buća family.

It is situated northeast of the upper end of the seaside promenade. First head up the street “Trg od culture”, and close to its northern end, turn to a small alley, “Trg culture”, on your left. The entrance is at the foot of a tall tower. In the summer of 2019, the entrance was free of charge.

Behind Porto Montenegro unfolds a large forest-like town park. While the park provides a nice alternative to seaside views and sunshine, that’s pretty much all it has to offer. 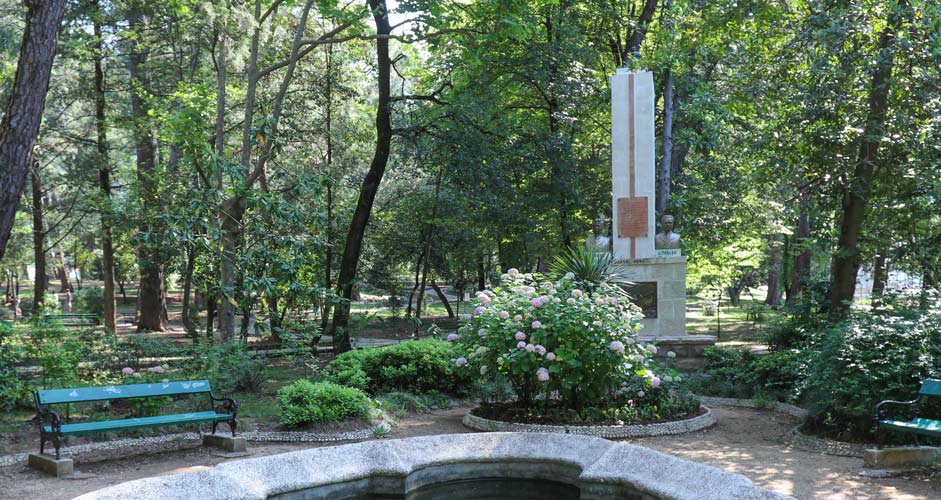 The distances are short in the bay of Kotor, and you should consider visiting other destinations of the area as well. Historic Kotor is definitely worth a visit. Taking a boat trip to the island church, Our Lady of the Rocks, is a popular trip, of which there’s more information in the Perast article.

Boat trips, fishing etc. are offered by providers such as Polar Star. 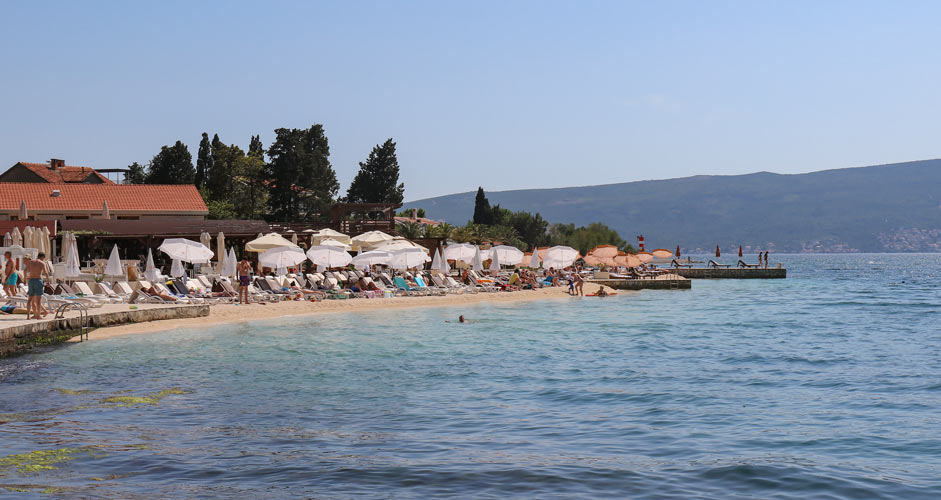 The beach areas south of the seaside promenade belong mainly to the hotels. 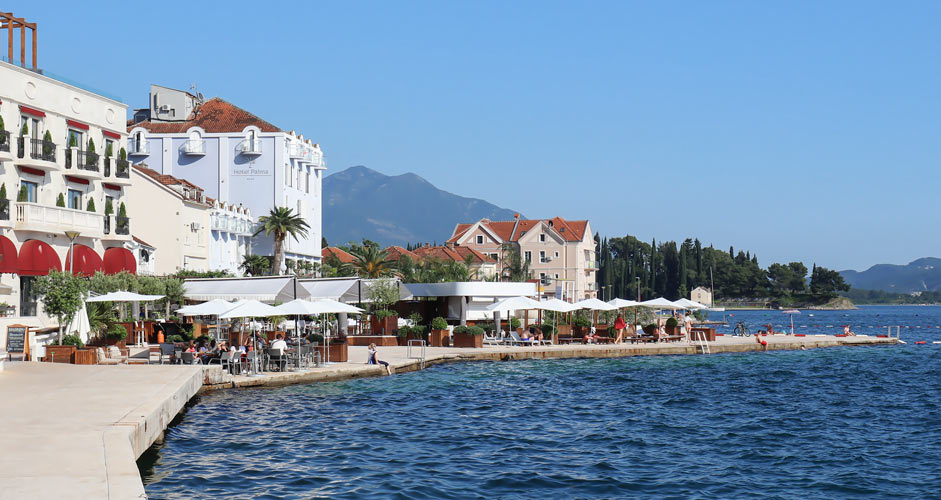 Concrete piers for swimming and sunbathing

For spending a nice day on a beach, consider the open sea beach Plavi Horizonti, also known as Pržno Bay/Beach, which is situated some 10 kilometers away from the center in the middle of nowhere. 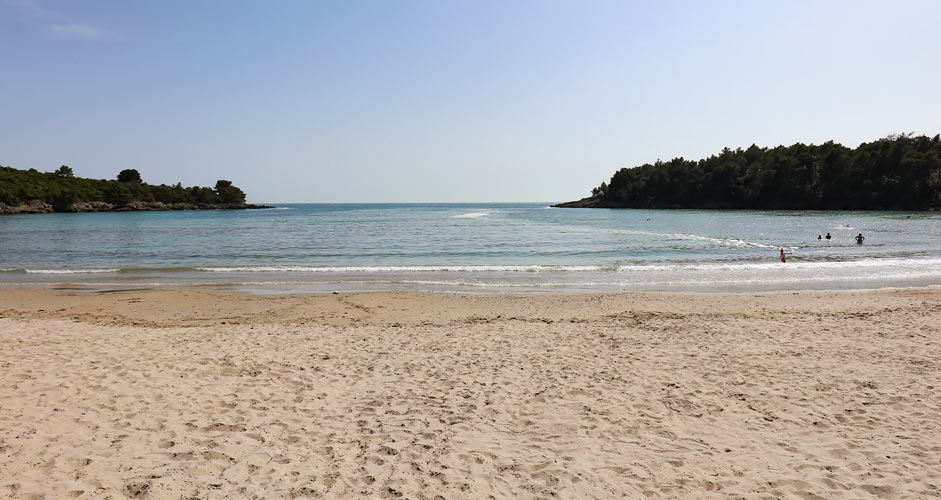 This beach has fine sand and shallow water. As the picture was taken in the beginning of June in 2019, the beach was under renovation, and even the deck chairs were still in store. Typically in midsummer, however, it’ll be anything but deserted, as the beach is very popular among the locals.

The easiest way to get to Plavi Horizonti is by taxi. There’s also the van-sized Blue Line bus operating between the beach and the center a few times a day, but considering the size of the vehicle, you shouldn’t rely solely on the bus.

In Tivat, the shopping possibilities are decent, especially on clothing. Near the seaside promenade, there are several stores to be found. In addition, Porto Montenegro has a few small boutiques with luxury brands well presented. You’ll have no trouble in spending a budget of any size there. 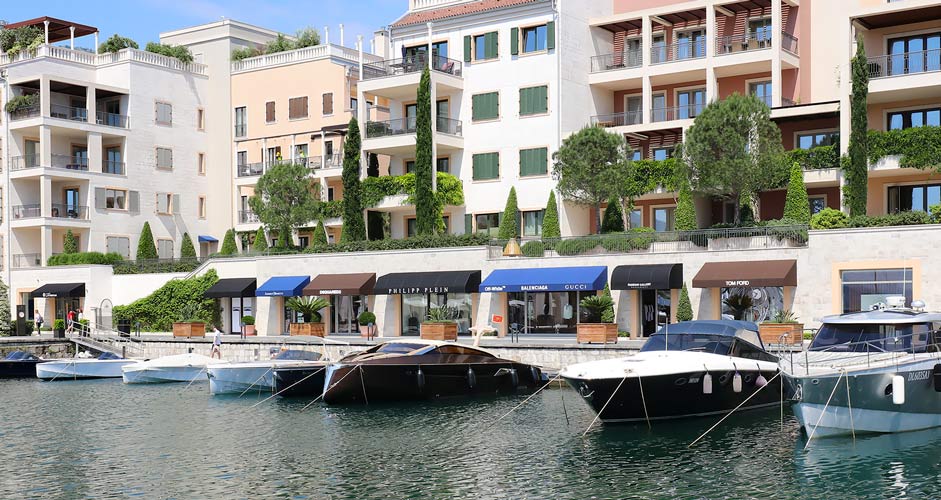 Boutiques and apartments in Porto Montenegro

Below, there are some examples of hotel and restaurant prices. The prices of hotel rooms refer to median prices at Booking.com.

From the airports to Tivat

Tivat Airport for international flights is situated just three kilometers away from the town.

The distance to Dubrovnik Airport in Croatia is only 48 kilometers, but the travel duration varies due to border crossing and a short ferry ride across the bay of Kotor. When heading back to the airport, reserve some extra time especially for crossing the border in order to catch your flight without a hassle. In summertime traffic jams the border crossing may take 2-3 hours, while in the best-case scenario it’ll just take a few minutes. In June 2019, a new border crossing point was opened, which should reduce queues.

You can also fly to Podgorica, the capital of Montenegro. The distance from Podgorica Airport is 91 kilometers. 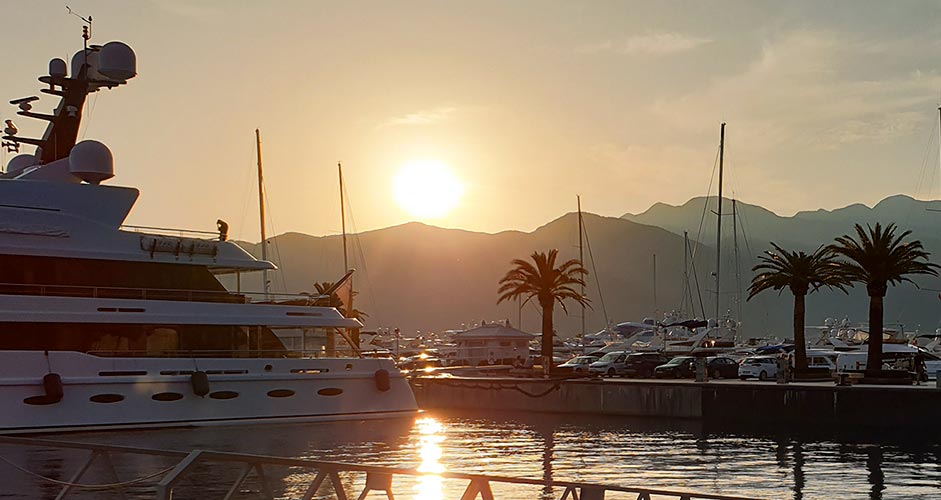 Spring: In March, it rains less, but temperatures are cool. In April, 20 °C is exceeded often, and in May regularly, but evenings remain cool. It should be noted, however, that the weather can be very unpredictable in spring, and the daily high temperature can be anything between 15-32 °C.