Klaipeda, on the southwest coast of Lithuania, has a rich history between Germany in the west and Soviet-Russia in the east. Although Klaipeda has been occupied by both over time, the town is very much Lithuanian today. The German heritage is still evident, but mainly via the timber framed Fachwerk houses in the Old Town. Klaipeda, the third largest city of Lithuania, lives off its harbor with busy cargo and passenger transport to the Baltic Sea.

The Curonian Spit, the 100-kilometer long peninsula with beautiful sandy beaches and the highest wandering dune in Europe, unfolds from Smiltyne just a 10-minute ferry ride away from Klaipeda.

The River Dane, and its cozy river banks passing the town, provide a marvelous setting for enjoying the traditional Lithuanian cuisine and drinks by the local Švyturys brewery. 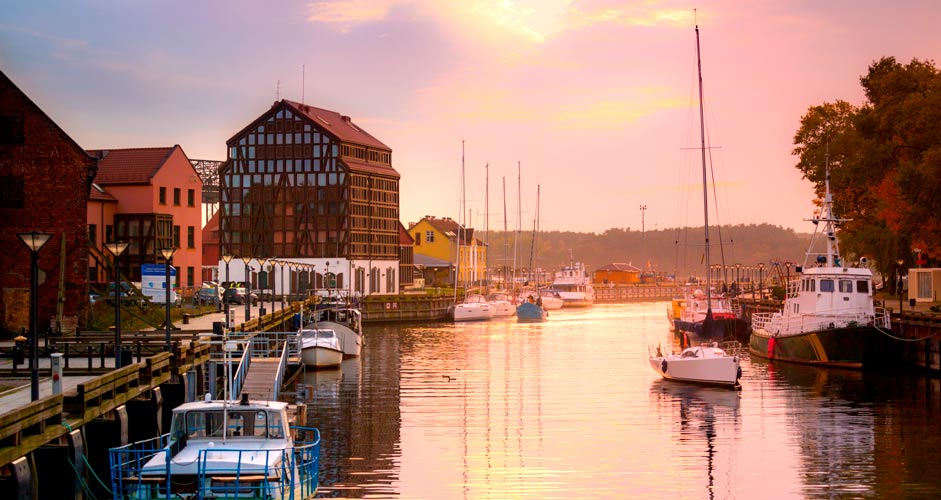 Klaipeda center is spread around the Old Town, which contains most attractions and the best selection of hotels and restaurants. The Old Harbor, with access to Smiltyne’s sandy beaches, is also situated conveniently in the center. Therefore, you should primarily look for accommodation near the Old Town.

Things to do in Klaipeda

Klaipeda is the oldest town of Lithuania, which until the end of the World War II, belonged to East Prussia and was known by the German-related name, Memel. The town began to grow during the 17th and 18th centuries, as it became an important port city along the River Dane on the coast of the Baltic Sea. The Old Town contains picturesque yards and parks as well as spectacular architecture, such as the Drama theater that was opened in 1818.

Klaipeda Castle was built by the Teutonic knights in 1253 to prepare for a war against Prussia. While there’s nothing left from the old castle itself, the formation of the defensive line can still be easily recognized. There’s a nice view from the defensive line to the town. While standing there, it’s easy to imagine the importance of the castle in protecting the town for centuries. In the area, there’s a museum with archaeological excavations and reconstruction for visitors to concretely learn about the history of the castle. The entrance fee is about 2 euros.
Website:  Klaipeda Castle Museum

Green grass has replaced the rampart of Klaipeda Castle

The name of the history museum, Lithuania minor, refers to a former East Prussian area where Klaipeda is situated today. Back then, the northeast corner of East Prussia was called Lithuania Minor.
The museum, which is situated in the Old Town, gives insight into the development of the area from prehistoric times to the Second World War. Lithuania minor is the number one museum in the town, and worth a visit if you’re interested in history. The entrance fee is about a couple of euros.
Website: Lithuania Minor

The oldest brewery of Lithuania, Švyturys, is situated outside the Old Town. The brewery houses a cozy restaurant serving Švyturys beers and high-quality food. There’s also a Švyturys shop and a museum displaying the history of the brewery.
Website: Švyturys Lithuanian Sea Museum, which was opened after a huge renovation in 2018, is the most popular attraction of the area. The modern facilities contain an aquarium, dolphinarium and a separate maritime museum. The aquarium has a tunnel with see-through walls, giving you the chance to admire fish swimming right above. The dolphinarium hosts entertaining dolphin and sea lion performances. The museum provides access to maps and discoveries, which lead you to the history of Klaipeda from the perspective of maritime activities.

To get to the museum in Smiltyne in the northern part of the Curonian Spit, you’re required to take a 10-minute ferry ride across the bay. You can take the ferry from either harbor, the old or the new. If you don’t have a car at your disposal, the old harbor (address Danes Gatve 1) is more convenient, as it is situated in the center and takes passengers closer to the museum. Having arrived at Smiltyne, it takes a bit more than a kilometer to get there on foot.

One of the landmarks of the town is the Meridianas sailing ship, which was built in Turku, Finland, in 1948. After the Second World War, the ship was given to Soviet Union as a part of war reparation. Today, Meridianas serves as a restaurant.

Curonian Spit (UNESCO World Heritage Site): A day trip to the beaches, or a canoe trip

Half of the 100-kilometer long, narrow peninsula belongs to Russia and half to Lithuania. The spit, with its sandy dunes and dramatic views, has been inscribed on the list of UNESCO World Heritage Sites. Among other things, the Curonian Spit contains the tallest wandering dune in Europe. A ferry ride from Klaipeda center to Smiltyne takes only 10 minutes, after which the distance to the beach is 1,5 kilometers.

The village of Nida at the northern tip of the Spit is a true summer paradise, which is easily reached using local bus connections from Smiltyne. In summer, Nida hosts plenty of events, such as the Nida regatta and the Film festival. Nida has various types of outdoor sports on offer, which all come with a fantastic view – rental bicycles, sailing, canoe trips and much more. Especially the canoe or kayak trips are truly unique experiences, as they provide access to untouched dune areas around Nida.

The local beer brand Švyturys is the pride and joy of Klaipeda. Švyturys is also the oldest brewery of Lithuania. While the brewery’s own restaurant offers the best selection of Švyturys products, the most popular ones are guaranteed to be on offer in every bar and restaurant around.

In addition to strong beer culture, Vodka is a common drink in Lithuania. Vodka shots are a typical treat after a heavy meal. Stumbras distillery in Kaunas is one of the most recognized brands, and its vodka and herb liquor shots will help you digest even the heftiest of meals.

One Lithuanian specialty drink worth testing is berry wine, which is produced from a variety of berries. While berry wines are typically sweeter than grape wines, there are variations to berry wines to suit everyone’s taste. They come as dry, semi-sweet or sweet.

The nightlife in Klaipeda is concentrated to the Old Town, where there’s plenty of night clubs, traditional pubs and new, trendy artisan beer bars around.

While Lithuanian cuisine is not well known abroad, the local food culture is going strong in Lithuania. Lithuanian cuisine contains numerous dishes that can be considered as purely Lithuanian. Lithuanian dishes are typically large and hefty, and anyone used to small portions should start off with one-course meals. The main ingredients are potatoes, root vegetables and pork.

Restaurant prices are low, and 20-25 euros should be enough to cover a three-course dinner without drinks. There are plenty of local restaurants to be found, especially in the Old Town near the Theater Square. You should also check the picturesque alley, Friedrich Passage, as it contains a variety of different cuisines. Shopping in Klaipeda is concentrated to shopping centers. The largest shopping center, Akropolis, is situated some 3 kilometers outside Klaipeda. It contains well-known international clothing brands, electronics stores and much more.
Website: Akropolis

There are some shops within the town center, but the selection of products is scarce. Tiltu street contains small clothing shops. On the outskirts of the Old town in the old market (Senasis turgus), you can shop in Soviet-style with locals spreading their products on concrete tables into a long row.

Prices are on the rise in Lithuania, but regarding general travel costs such as accommodation, food and drinks, prices are among the lowest of the European Union.

Below, there are examples of restaurant and hotel prices in Klaipeda. Hotel room prices refer to the median prices at Booking.com.

From airport to Klaipeda

The closest international airport, Palanga, is situated about 30 kilometers away from Klaipeda. There’s a bus connection from the airport to Klaipeda bus station. The journey takes 40-50 minutes and is about 3 euros one way.

Bolt taxis, an Uber type of service, takes you to Klaipeda for about 20-25 euros. However, Bolts are not always available, as their number is limited in the area.

From Vilnius to Klaipeda

Train is the most convenient method to travel from Vilnius to Klaipeda. There are older and newer trains operating the connection. Travel times of below 4 hours will indicate that the operating train is of the newer model - and vice versa. New trains are very clean, and they come with air conditioning and toilets.

When to travel to Klaipeda The ideal time to travel to Klaipeda is during the summer months, from June to August, which is the period with the highest temperatures and the least amount of rainy days.

Summer: Summer months are the best time to travel to Klaipeda. Temperatures are about 16-18 °C on average, but daily highs may even rise to 30 °C.

Fall: In September, the weather starts to cool down and daily highs drop to below 20 °C. Fall is the rainiest time of the year in Klaipeda. In October and November, temperatures drop to about 0 °C.

Check also these destinations by the Baltic Sea