The Old Town of Dubrovnik is surrounded by sturdy, medieval walls and towers. Climb to the walls and stroll around with a bird’s-eye view to the town. Then explore the streets packed with tiny alleys, picturesque bars and cozy restaurants. No wonder the Old Town is one of the top destinations in Europe.

What's more, there’s much more to Dubrovnik than just the Old town. The wide-spread town contains something for everyone. Whether you love beaches or prefer an active holiday, Dubrovnik has excellent choices to choose from. 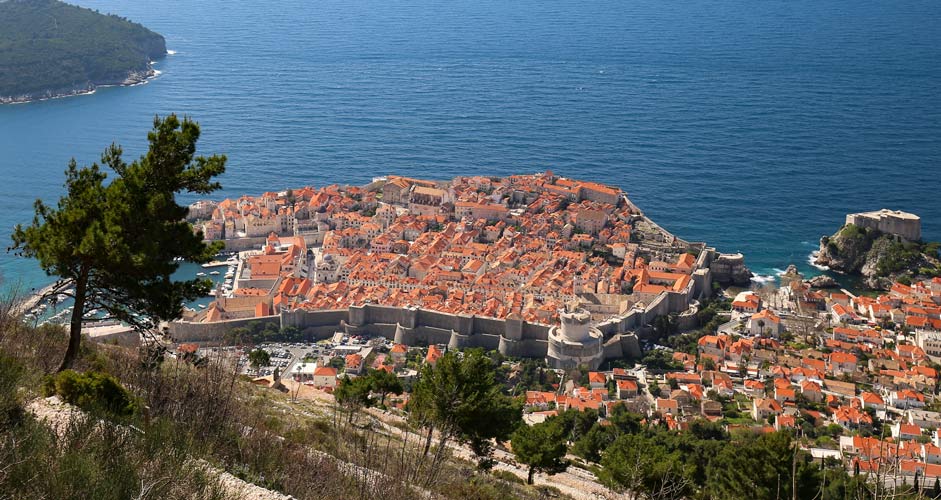 The Old Town is surrounded by walls. 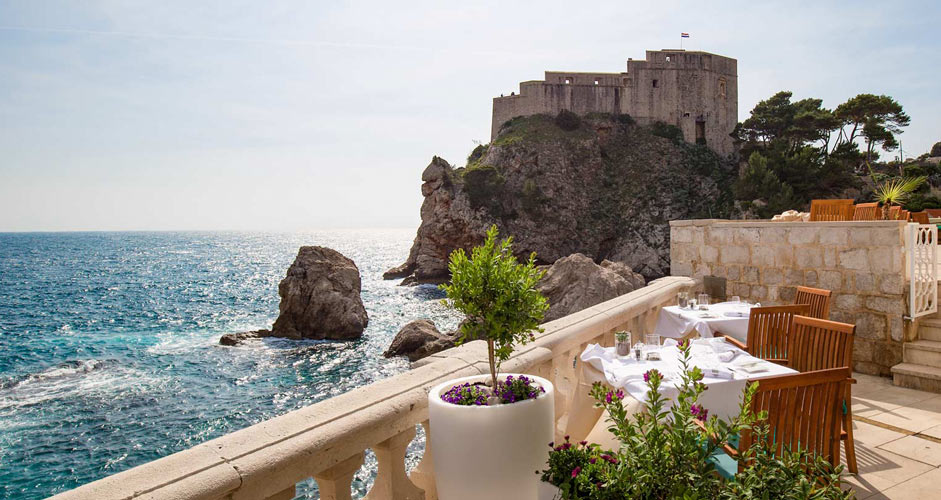 Fort Lovrijenac is located next to the Old Town.

Where to stay in Dubrovnik

Depending on your holiday plans, there are several types of areas to choose from:

Find your hotel in Dubrovnik at Booking.com's hotel map

Things to do in Dubrovnik 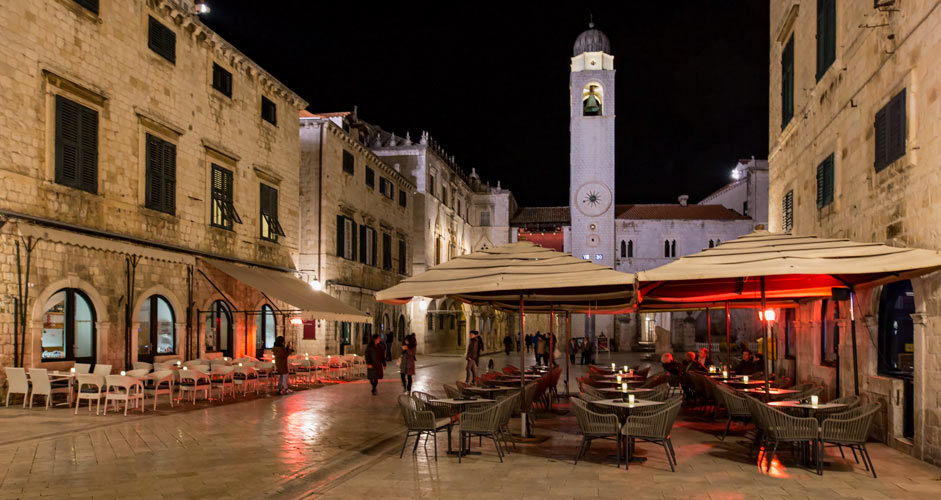 Most of the attractions of Dubrovnik are situated in the Old Town, which due to its history and versatility is one of the most interesting places in Europe.

The inner area is flat with full of churches, palaces and museums. The outer area consists mainly of uphill and residential areas (also full of rental holiday apartments) with countless narrow streets, stairs, and small restaurants around every corner. It would be easy to get lost there, but fortunately there’s a simple way of navigating: go down and you'll end up in the center; go up and you'll eventually face the surrounding walls.

Attractions in the Old Town

There are fascinating churches one after the other in the Old Town. You can visit them freely without entrance fees. 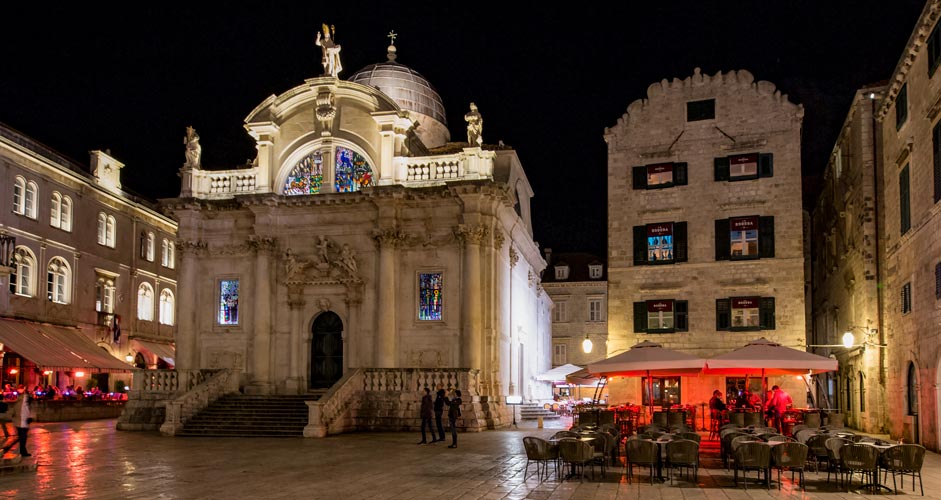 The Rector’s Palace is situated next to the Dubrovnik cathedral. The name Rector refers to the ruler of the republic of Ragusa. In addition to its fascinating architecture, the palace also contains plenty of art works and antique furniture.

The Sponza palace is situated right next to the bell tower near the Rector’s palace. It is smaller of the two palaces containing changing exhibitions. 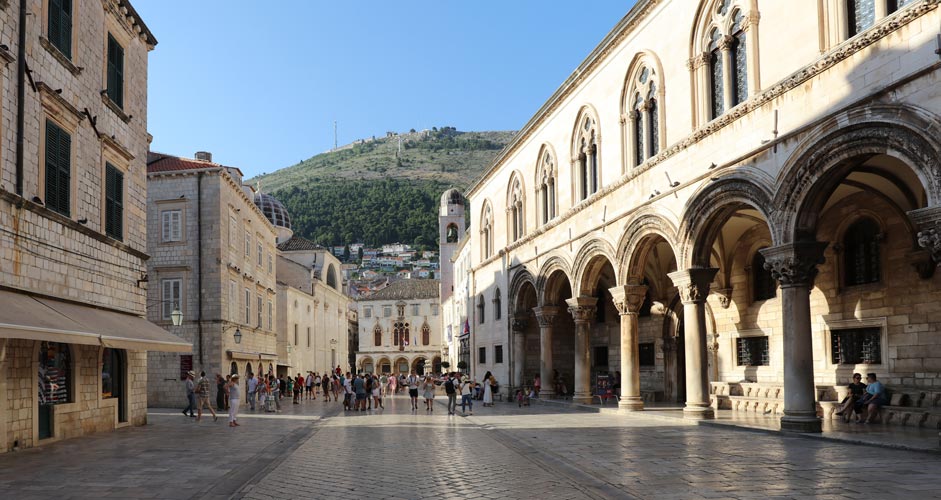 The Rector's Palace on the right, the Sponza Palace at the end of the street

Dubrovnik is one of the filming locations of the popular series Game of Thrones. One just can’t avoid GoT commercials in the Old Town, and among other things, there’re guided tours on offer showing the very locations where scenes have been filmed.

Fort Imperial on the top the Srd Hill is visible from all over Dubrovnik (image). It was an important point of defense in the Croatian War of Independence in the early 1990s.

Nowadays the fort houses a museum about that war. There is also a restaurant and a cafe by the cable car station.

It's easy to get to the top by a cable car, but it might be a good idea to walk down. Bear in mind that walking up in the heat of the summer could be tough. You can see what the road is like in this picture. Some of the rocks are quite large and sharp.

The entire Old Town of Dubrovnik is surrounded by walls. For an entrance fee, visitors can climb to the walls and walk around the town (within opening hours). Tickets are sold at booths next to the entrances, such as by the Pile Gate on the western side of the Old Town. More information about the tickets can be found here.

On the walls, there are a couple of places to buy drinks and have a rest. 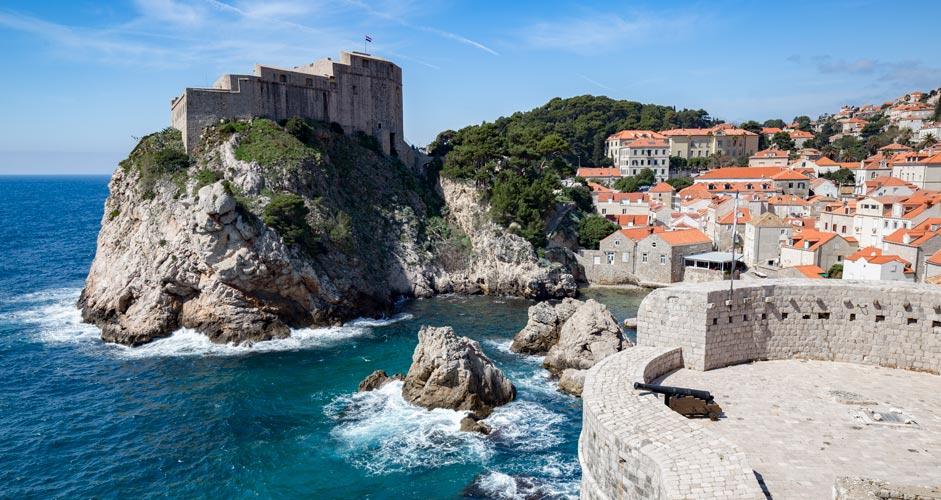 Fort Lovrijenac as seen from the walls

With the same ticket you can also visit Fort Lovrijenac by the Old Town. Or if you visit the fort first, the price will be deducted from the price of the ticket to the walls.

The Lokrum island in front of Dubrovnik is a popular destination for day trips. The best attractions of this nearly 2-kilometer-long island are an old monastery complex and the ruins of a fortress built by Napoleon.

Otherwise Lokrum is more suitable for spending good time rather than seeing sights. The southern parts of the island are dedicated to swimming and sunbathing; the options include either a wide, flat rocky area or deckchairs. You can also take a swim in a small salty lake, referred to as Dead Sea, which accumulates its water from small caves and cracks around it. Also the Lokrum marina area has rocky shoreline for sunbathing. 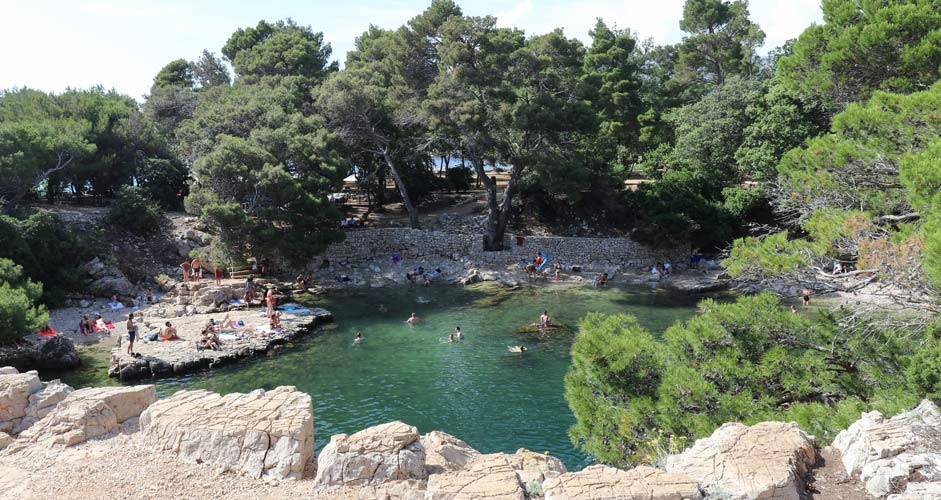 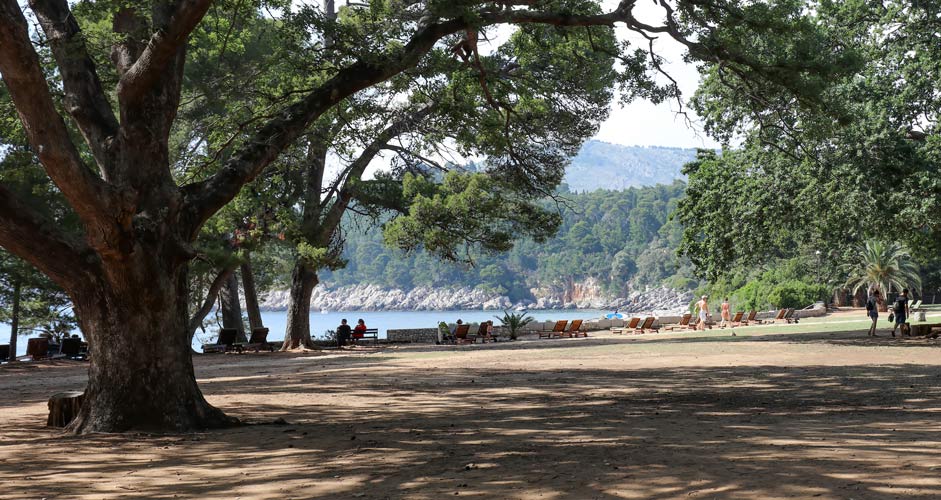 A sunbathing area with deck chairs

Next to the southern areas for swimming and sunbathing, there’s a small fitness area, a small soccer field as well as rabbits and peacocks running around free.

The ruins of the Fort Royal fortress, which was built by Napoleon, is standing on the highest point of Lokrum at 96 meters. If you don’t like climbing on a hot day, you might want to consider whether the effort is worth it; ruins and nice views to Dubrovnik and the island itself are pretty much all that’s waiting on the top.

Lokrum also houses a small botanical garden. The map of the island with indications is shown in this picture.

Lokrum contains a few bars and a restaurant. It’ll only take 15 minutes to get to the island on a water bus leaving every half hour from the marina of the Old Town. Two-way tickets cost 150 kunas, some 20 euros/US dollars, in 2019. The major part of the cost (120/150 kunas) is due to the entrance fee to the island, which you would have to pay separately when using other means of transportation.

When planning your schedules, bear in mind that you can easily spend a couple of hours or more on the island.

The shores of Dubrovnik offer excellent possibilities for water sports. Sea kayaking is a popular pastime near the Old Town and Lokrum island. Sea kayaking gives you a different perspective when getting to know the surroundings. There are guided tours on offer, or you can paddle around on your own.

All beaches in Dubrovnik are either gravel or pebble beaches, as there are no sandy beaches in the area.

The Banje Beach is very popular in summer, as it stands almost next to the Old Town. There’s a restaurant, a bar and a night club behind the beach. 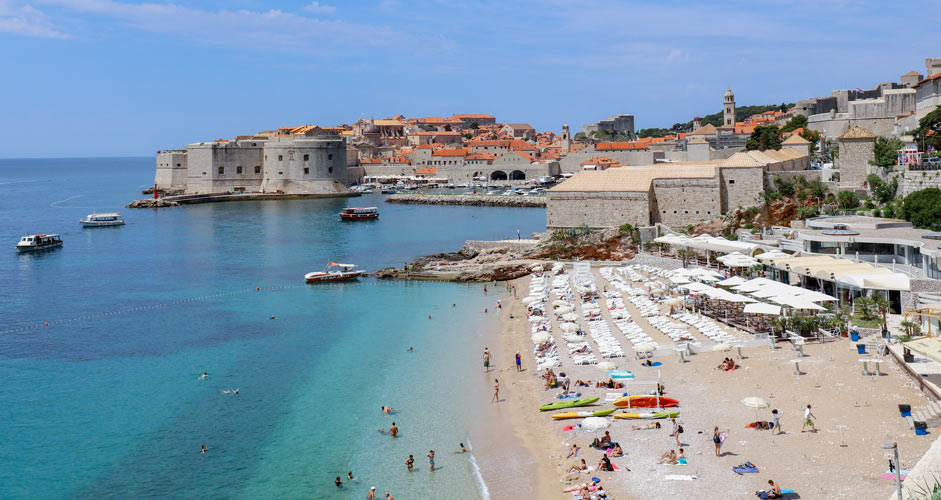 The Banje Beach is located near the Old Town

The renovation of the Lapad Beach at the bottom of the Lapad bay was finished in 2017. The beach is just one element of the cozy area. The pedestrian street leading to the beach is packed with restaurants, bars and cafes, which tend to be aimed at tourists. Around the beach area, there are more restaurants, different deckchairs, massages etc. on offer. 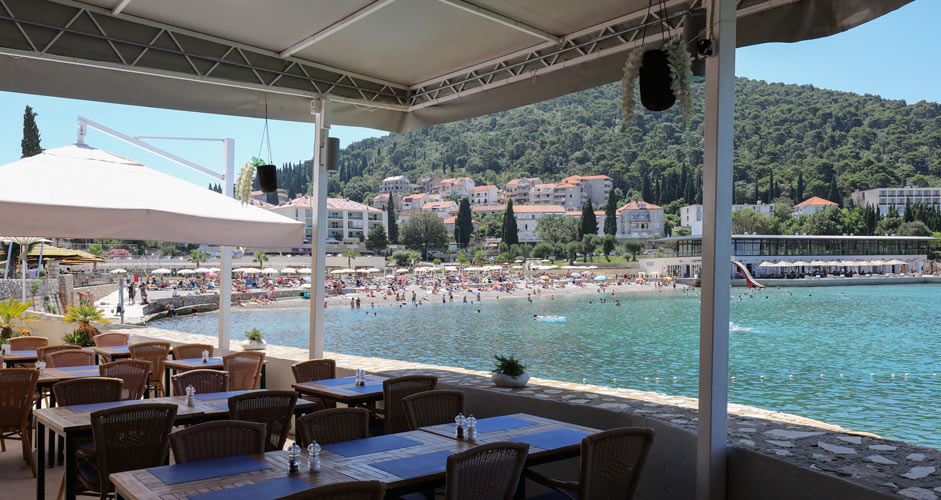 The beach itself is divided into two pebble stone sections along the bay, both equipped with deckchairs. Westwards along the beach, there are smaller and more quiet beaches as well as rocky areas for sunbathing and going for a swim. Some beach bars are also present.

Heading northwest along the beach towards the Babin kuk peninsula, there are several staircases down to the rocky shoreline. With a bit of luck you might find a good spot to lay your towel on the rock and dip for a swim in the turquoise sea.

Babin kuk peninsula contains private hotel-owned beaches and beach clubs as well as public ones. At the tip of the peninsula, there’s a public Copacabana Beach. It’s rather secluded, but contains good services including restaurants. This area has also been under renovation during the past couple of years. 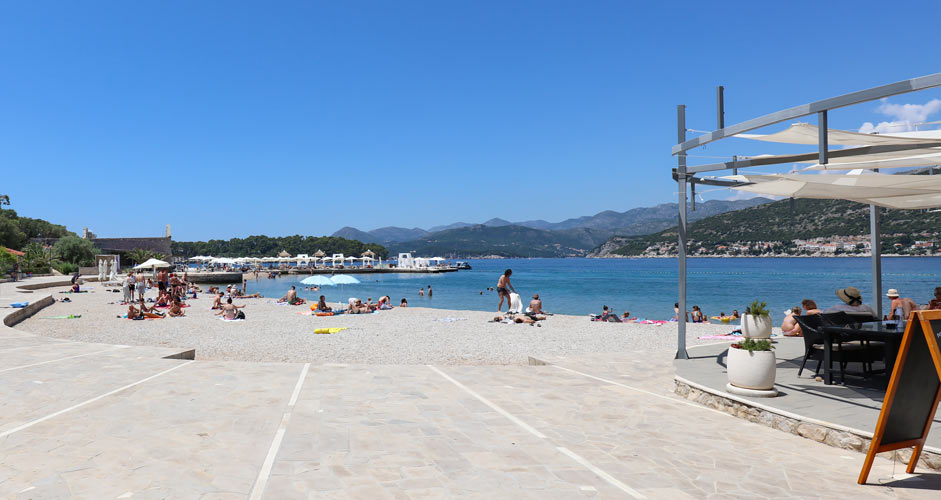 There are ocean-going ship routes passing the peninsula, thus making the area less protected than the Lapad bay. This may reduce the attractiveness of the beach.

If you accommodate east of the Old Town, or if you wish to try a more secluded beach, try the Sveti Jakov Beach some 1,5 kilometers eastwards from Banje Beach. As such, it’s well within walking distance from the Old Town. 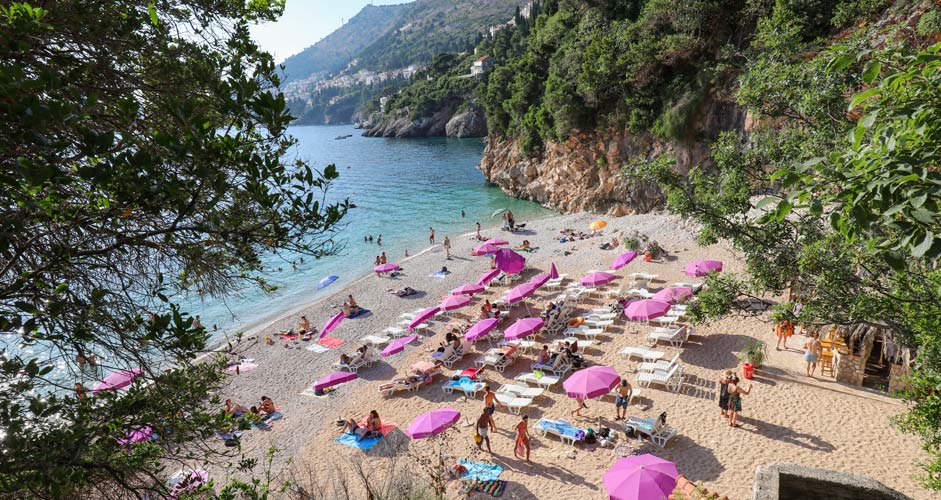 Sveti Jakov is one of the lesser known beaches in Dubrovnik

The beach has good services in summer: a bar, a restaurant, deckchairs and umbrellas as well as rental jet skis. The beach is partially made of imported sand, but the waterline consists of pebble stones like all the other beaches in Dubrovnik.

Right next to it, there’s a concrete pier and rocks for sunbathing.

In spite of its popularity, the beach may feel rather deserted due to its distant location from the center and the steep cliff ascending behind the shore. The evening sun shines long into the evening at the Sveti Jakov Beach.

A parking lot is situated next to the Sveti Jakov church, from where there’s a long stairway down to the beach.

The Bellevue beach is situated within a small cove in front of Bellevue hotel. The Bellevue Beach is surrounded by cliffs

The beach contains a restaurant and exceptionally green sea water. The sun is blocked by a high cliff rather early (late afternoon in mid-summer), leaving the beach in the shade.

Getting there: Approach the beach from southwest along the road (Kotorska ulica) passing Rixos Libertas hotel. There are stairs at the end.

The Dance Beach consists of rock and is situated on a cape behind the fortress of Lovrijenac. At the tip of the cape, there’s a parking lot with stairs down to the beach.

Dubrovnik is not exactly a shopper’s paradise, since the town concentrates mainly on attractions, restaurants and amusement of tourists. 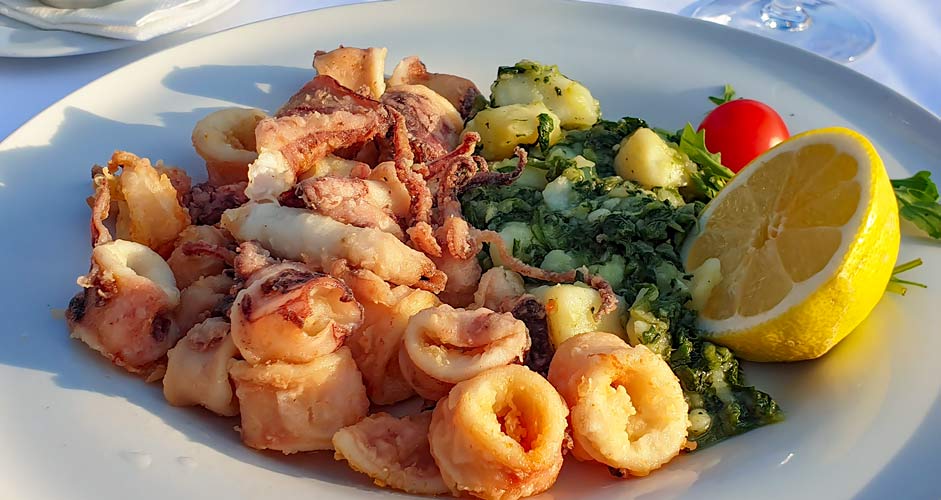 Boiled potatoes and Swiss chard, sautéed in garlic oil, is a popular dish around Croatia. Fried squid next to it on the plate.

The best restaurants are typically situated in the Old Town or very close to it. Fish and other seafood are very common, but there are restaurants for everyone’s taste to be found.

Below, there are some examples of hotel and restaurant prices. Restaurant prices refer to the Old Town or the Lapad beach area, and as such they are as high as it gets in Dubrovnik. In other areas, meals are considerably cheaper.

When to travel to Dubrovnik

Dubrovnik has become more and more popular in recent years, to a point of it being a problem. It doesn’t help that the Old Town is a favored day trip destination for loads of cruise passengers circling on the Mediterranean. Dubrovnik can be full of tourists in the high season, so if at all possible, it’s better to visit the town in springtime or fall. Moreover, you might get a hotel room for less than half price compared to July or August, and the weather is nicer than in the hottest months.

The restaurants usually open their summer terraces by Easter. For those looking for a beach holiday, fall is obviously a better choice.

How to get to Dubrovnik from the airport

Arrive by shuttle bus: Platanus Shuttle Bus is the official shuttle bus between Dubrovnik and the airport. There is no bus schedule from the airport to the city. Instead, the buses leave about 30 minutes after every flight (not at night-time).

Schedules from city to airport and more information: platanus.hr Spring: Spring is a great time to visit Dubrovnik, unless you’re a keen swimmer. The daily high temperatures surpass 20°C in April, but the evenings aren’t that warm yet. Therefore, it’s best to have a coat with you. May is already a very warm month with temperatures going constantly over 20°C and closing in on 30°C. It rains less in spring compared with winter and autumn months.

Summer: From June to August, the sunshine is pretty much guaranteed. It really gets hot in Dubrovnik, as the temperatures climb to 30 °C and above.

Check also the other destinations in Croatia