With different types of beaches and crystal-clear water around, Split is also an excellent beach destination. To rocky beaches, you should bring along swimming shoes, so that you don’t have to worry about sharp rocks in the water or the roughness of beach gravel.

Video of the beaches in Split (September-October 2021)

Beaches east of the center of Split

The eastern side of the center consists of beaches one after the other for about three kilometers. In between, there's only a marina dividing the beach clusters into two parts, which turn out to be quite different from each other.

The beaches before the marina, as seen from the center, are Bačvice, Ovčice and Firule. Of these, and in all of Split, Bačvice and Firule are the only sandy beaches, and they have very shallow water. Ovčice in the middle consists of rocks and gravel.

The beaches after the marina are very similar to each other. They consist of gravel, and the water deepens fairly steeply. On the other hand, these post-harbor beaches are more spacious and scenic. 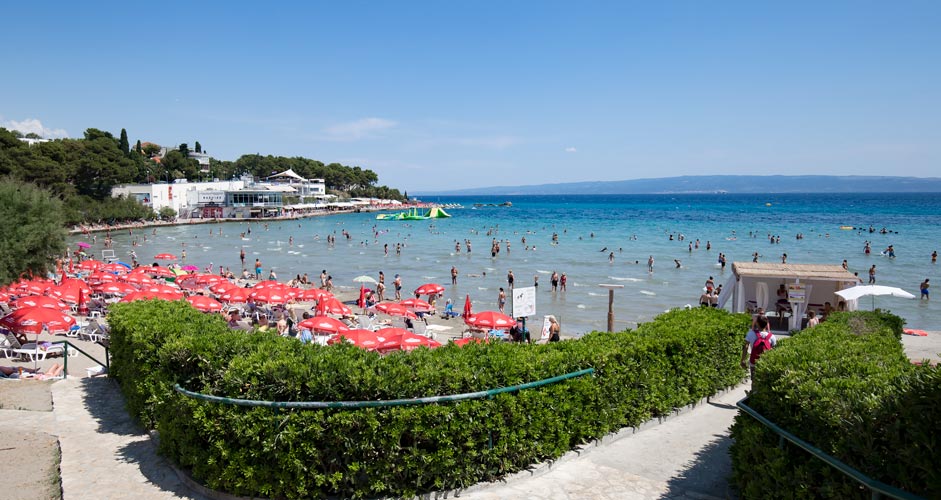 Bačvice is located on the bottom of a bay near the center of Split. The bay has very shallow water, and it is therefore well suited for all kinds of water games. A popular game among locals is picigin, in which players hit a small rubber ball with the palm of their hand from one player to another in a ring. Even older gentlemen tend to make spectacular dives in knee-high water, as no-one wants to be the one that dropped the ball.

This small sandy beach at the bottom of a bay is very busy in summer. The seabed consists of tightly packed fine sand, and the above-water sand on the beach isn't very soft either. Despite its popularity and proximity to the city center, Bačvice is a Blue Flag certified beach. One of the criteria for the certificate is good water quality. 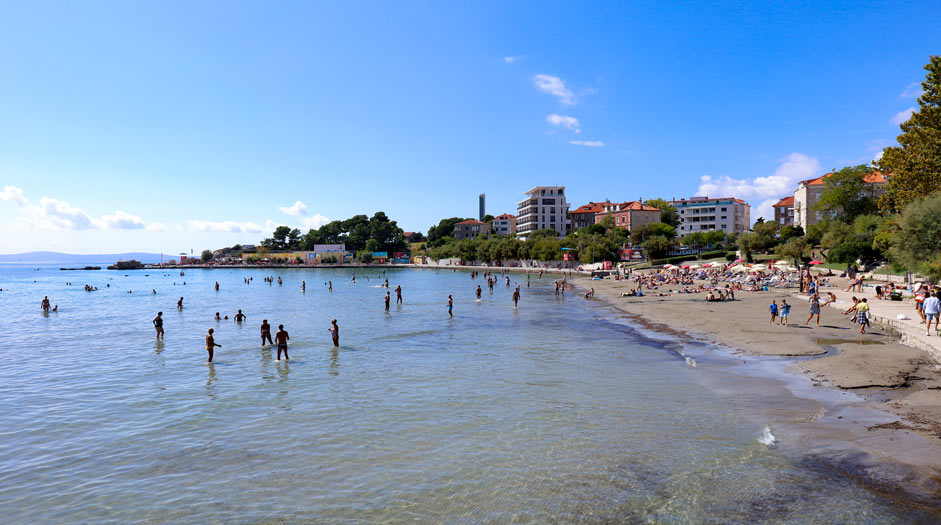 The west bank of the bay contains a concrete platform with stairs to the sea in a few spots. You can rent sun loungers or lay on your own towel. There are also a couple of beach bars on the western side.

There's a row of restaurants towards Ovčice starting from the eastern shore of the bay. Next to them, there’s a concrete area with sun loungers for rent. The restaurants mainly serve typical beach food, i.e. salads, burgers, pizzas, grilled meats, and seafood – not forgetting the cocktails, of course. There are more than ten restaurants or bars between Bačvice and Ovčice. 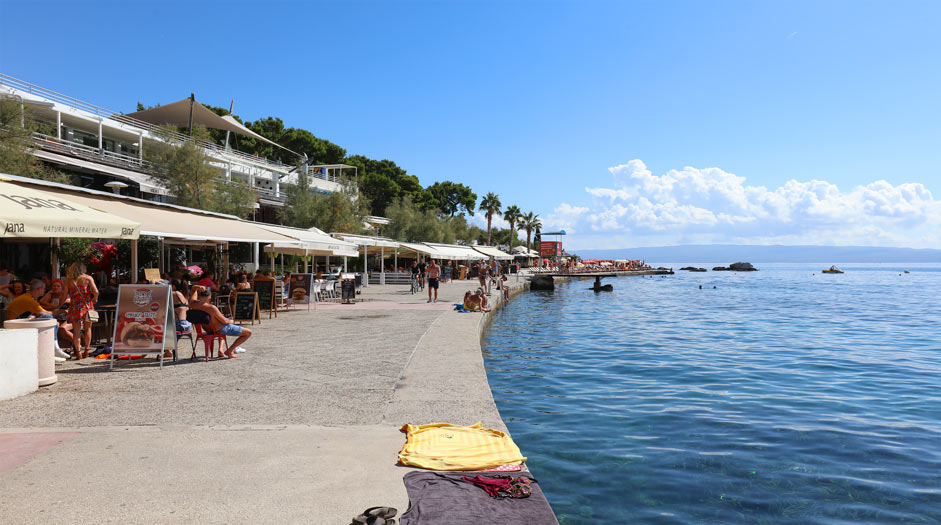 There are more than ten restaurants and bars between Bačvice and Ovčice.

Bačvice is also known for its busy nightlife, and partying doesn’t stop even after the sunset.

In Ovčice, right after the restaurant street, there's a more quiet atmosphere due to the lack of a sandy beach and a rather rocky seabed. Moreover, the water deepens quickly. Consequently, the price of a sun lounger drops by half (100 -> 50 kunas in 2021). 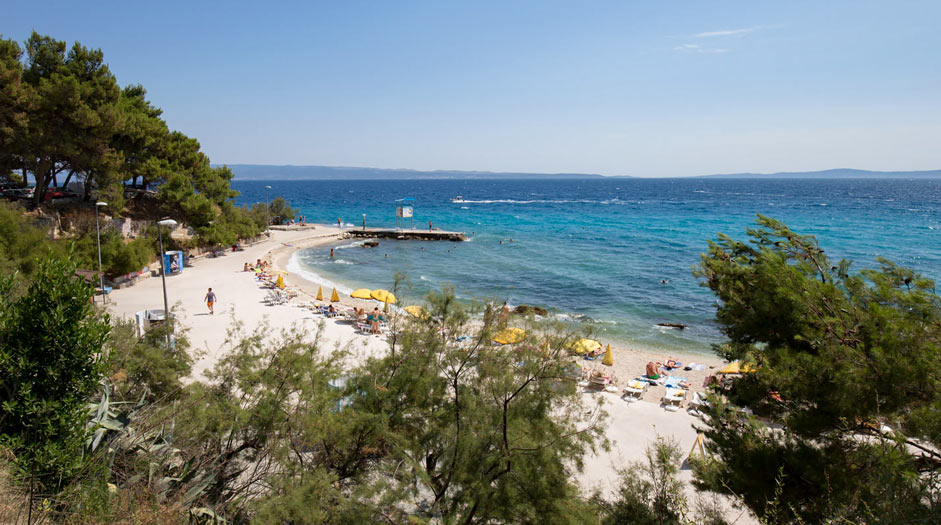 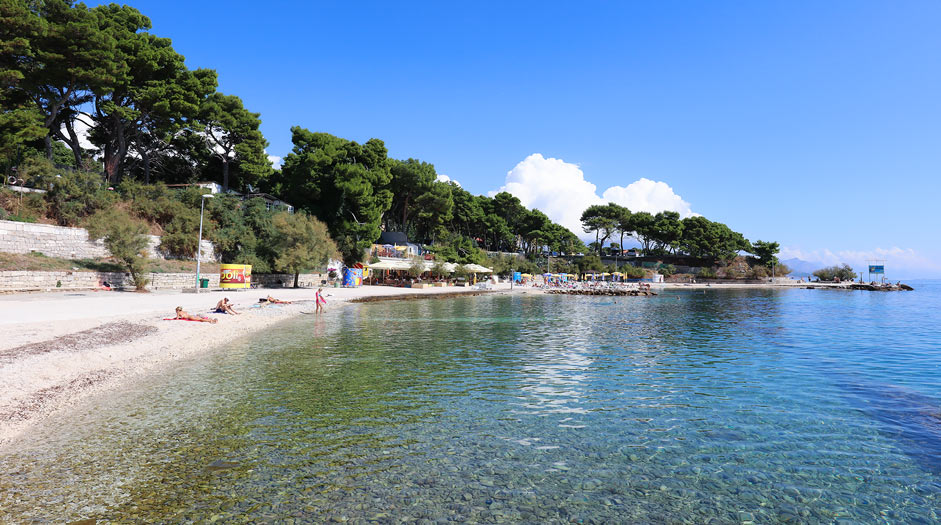 Ovčice is well suited for relaxation and occasional swimming trips. The beach is narrow and consists of gravel, with a concrete section in the back.

The Firule beach is located at the bottom of the bay with the same name, next to Ovčice. It resembles the Bačvice beach in that the bay has shallow water, and the beach itself consists of sand. The sand on the beach is not as tightly packed as in Bačvice, and it therefore feels a little more comfortable under the towel. 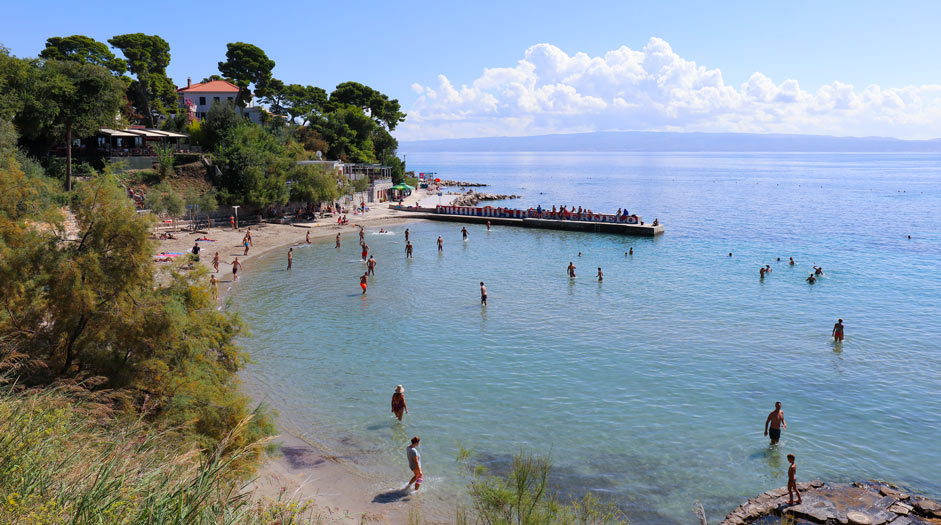 However, the beach itself is small, and most of the bay is covered with a concrete edge. There are a couple of cafés/beach bars behind Firule. For changing clothes, you may need to look for visual protection around the next corner, where there are still a couple of small pebble beaches before the shore turns into a marina area.

The beaches after the marina are very similar to each other, and it is pretty irrelevant which one you choose. The beaches consist of small stones, and in the water, the size of the stones varies. The water deepens pretty quickly, so you can’t wade far. On the shore, the size of the rocks decreases from the pebble beaches of Trstenik to the partial gravel beaches of Žnjan. Each beach contains showers and screen protectors for changing clothes.

The easiest way to get to these beaches on foot is to turn right at the end of the Put Firula street after the tennis courts, or to continue from the Firule Beach straight through the marina. From Riva, the distance to the first beach is 2,5 kilometers. The distance from the previous beach, Firule, is one kilometer. 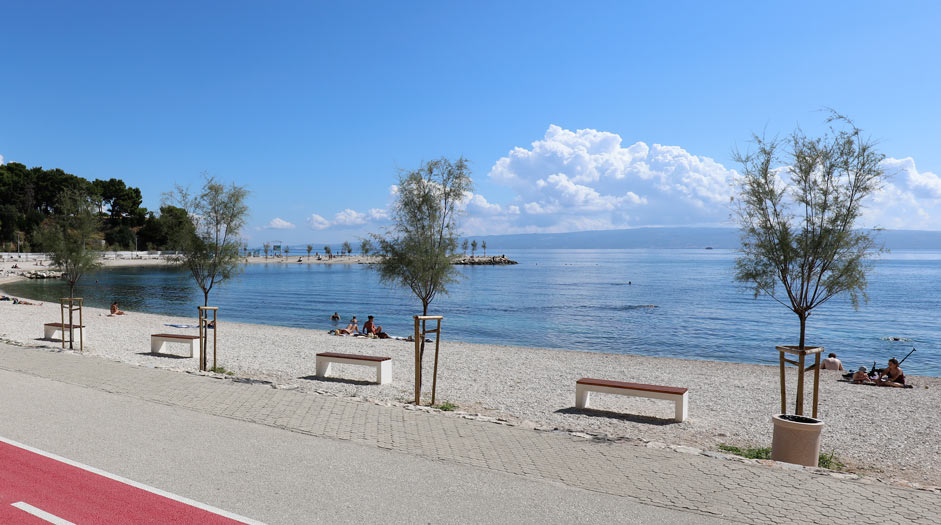 First up is Trstenik, which is the most quiet and longest of the beaches. Trstenik is also suitable for, e.g., reading a book, while having an occasional swim.

After Trstenik, there are a couple of similar smaller beaches, one of which houses the Mistral Beach Club. It belongs to the Radisson Blu Hotel, but is open to others as well. There is room for your towels on both sides of the Beach Club. The beach is also known as Radisson Beach. 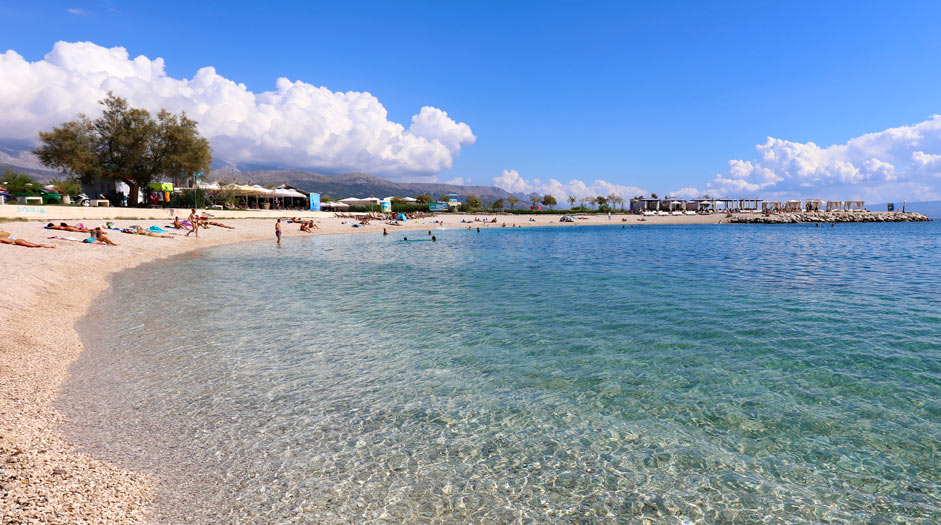 Towards the Žnjan beach, the spirits are getting higher, and the music begins to play. There are several beaches and beach bars in the area. For children, there are various bouncy castles and trampolines as well as a mini go-kart track on offer. The water deepens sharply, but the color of the beaches is more beautiful compared to those closer to the center.

In summer, the Znjan beach has beach guards, safe deposits, and equipment rentals for water sports. The distance from the center is already several kilometers. 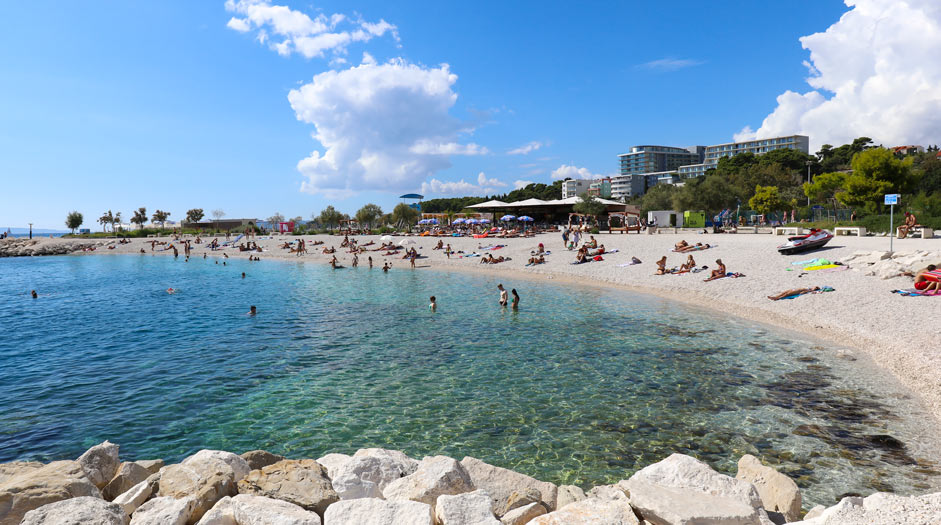 The beaches of Split west of the center

The beaches westward from the center are located around Marjan Hill. There are no sandy beaches, but the rugged landscapes of Marjan spice up to the pebble beaches on this side of the center, each feeling almost deserted. And they are not far from it.

The water gets deep quickly in all of these beaches, and therefore they are not very suitable for small children. All beaches can be reached by the bus line 12, which departs from the western end of Riva and drives along the southern side of Marjan Hill. The end point of the line is the Bene beach, from where it returns along the same route. 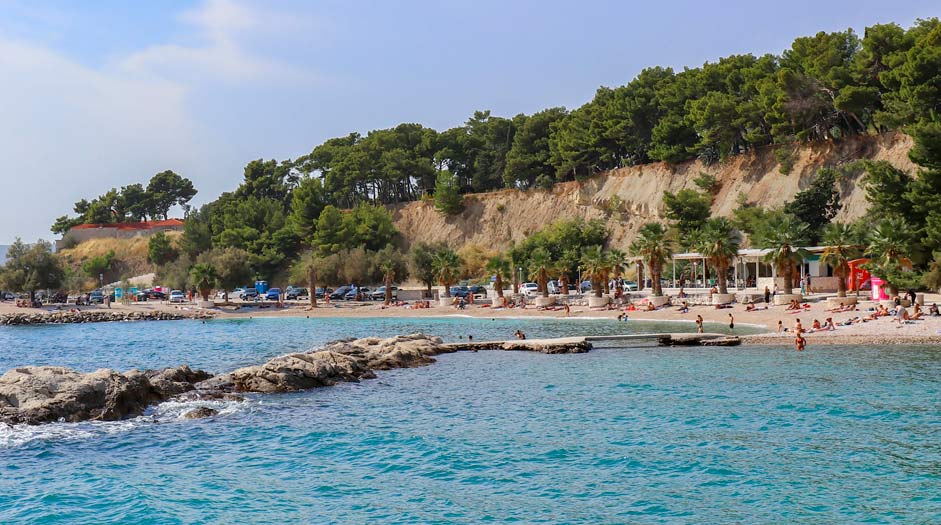 There is a restaurant at the back the larger beach.

The first beach west of the center is the Kaštelet beach. It is situated a short seaside walk away along the concrete-cobblestone road from the Hotel Jadran after the marina. The distance from Riva is a couple of kilometers.

The beach is also known as Obojena. Next to it, there's also the Ježinac beach, so you might get mixed up with the names. 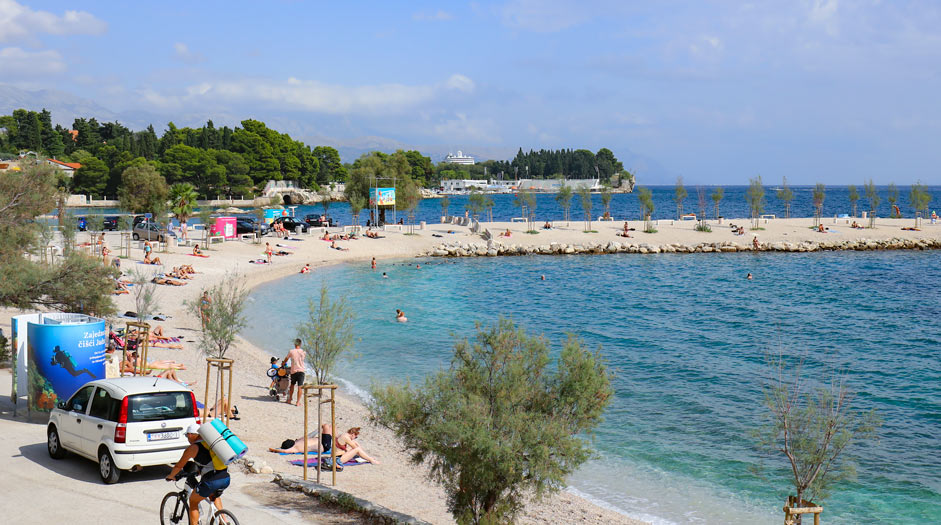 A smaller beach on the other side of the cape.

Behind the Kaštelet beach, there's a restaurant but no sun lounger rentals. There are beaches on both sides of the small cape. 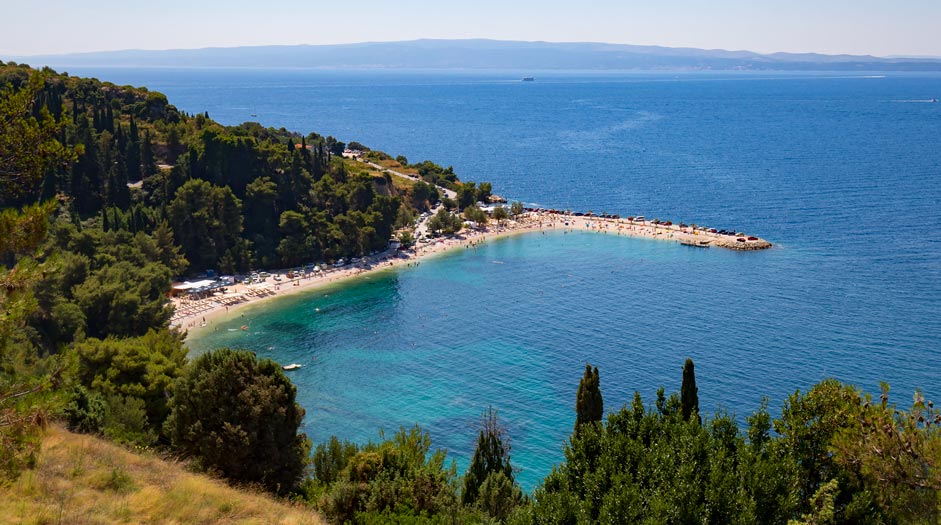 If you want to spend a cozy beach day in the middle of nowhere, but with spectacular views and a club, Kašjuni is a good option for that. The rugged view of Marjan, music from the beach bar and the clear sea before you will make sure of that. 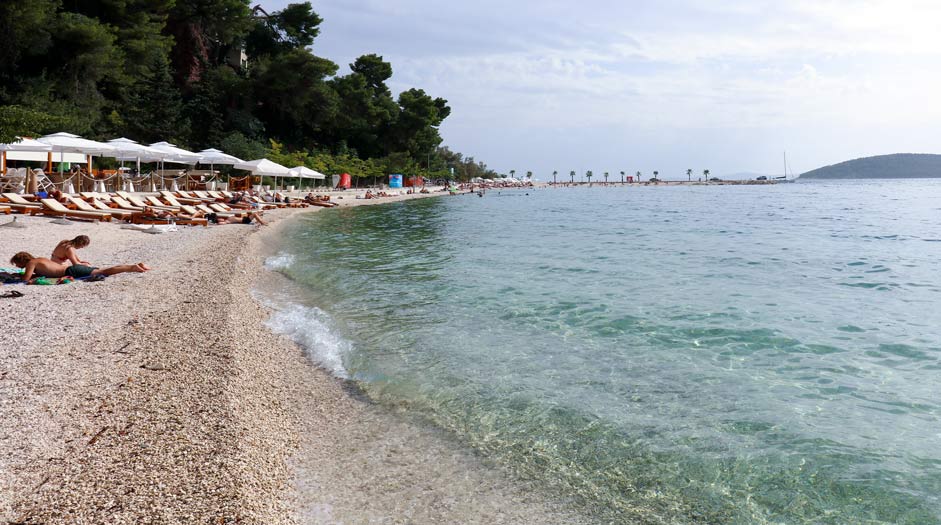 The more quiet side.

The beach can be divided into two parts: the busier side with the beach bar, and the more quiet side at the foot of the hill, in the shade of pine trees – you can’t hear the music there. Also the quiet side has a bar, but a quiet one.

On the busier side with Joe’s Beach Lounge & Bar, the beach day continues until sunset.

The Bene beach is located on a rocky surface that is protected by a forest. There are sunbathing platforms here and there and ladders to the sea to make it easier to go swimming. Therefore, it is not an actual beach, but there are sun loungers available.

The Bene beach offers lots of activities ranging from tennis to football, and has all kinds of gadgets for toddlers as well. The area may be reminiscent of a parish summer camp, with something for everyone. However, drinks are a common sight at the beach bar. 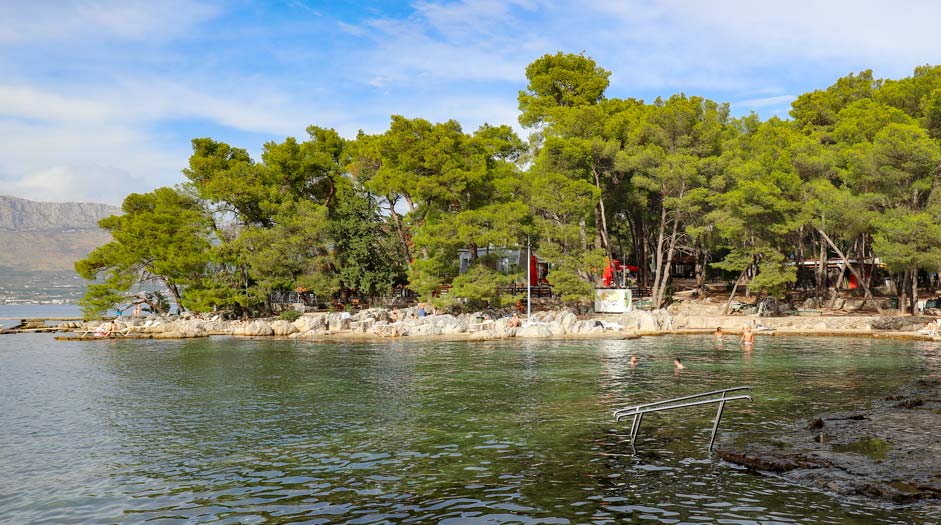 Even the restaurant is hidden under the trees.

There's a separate walking/cycling path on the northern side of Marjan Hill, with no access for cars. This 1.6-kilometer-long path starts at the Špinut marina and ends at the Bene beach. Along the way, there are lots of cliffs for sunbathing and swimming. However, only the late afternoon or evening sun tends to shine on the northern side of the hill, depending on the location and terrain.