Nimes, located in the South of France, was an important city to the Roman Empire, which can be easily seen even to this day. The city has one of the oldest preserved amphitheaters, a majestic Roman temple, a magnificent garden and an old town full of historical monuments. Some call the city “The French Rome”. Thanks to its 2000 years of history, Nimes takes you on a journey to the times of the Roman Empire, where the era of antiquity is mirrored to this very day.

Nimes offers more than historical and cultural diversity. The old town contains delightful alleys, welcoming restaurants with their specialties and local hospitability. These wonders speak for Nimes as your next holiday destination. 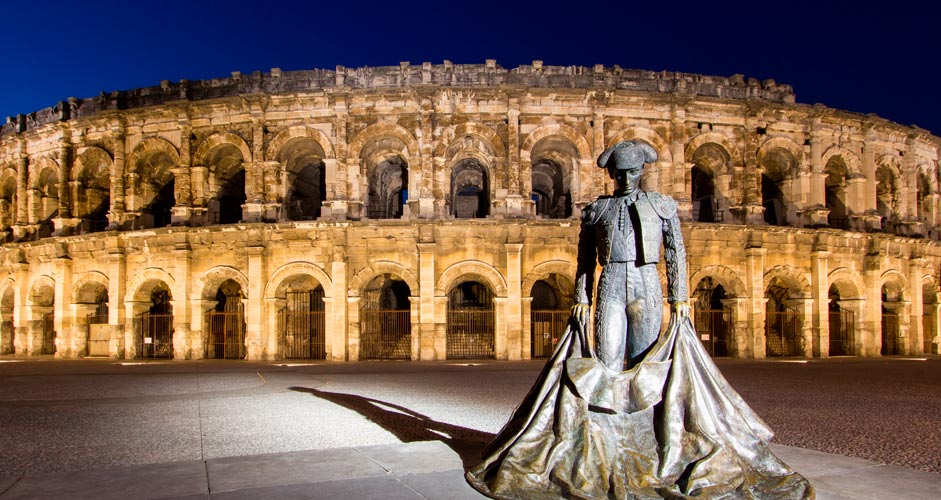 The best place to look for accommodation is the city center, where you can get to the most important sights faster. If you’re planning a summer holiday and you’re searching for moderately cheap hotels or guest houses, the search for accommodation should be started early on.

The city center is extremely flat, and the most important sights are within walking distance. That’s why the best way of getting to know the city is by walking. The largest selection of restaurants or places for eating a good lunch are found in the city center.

Nimes is an easy choice for those who like cycling, for there are many rental stations and the rental is easily done through a vending machine.

Do you want to walk the footsteps of the Romans or dive into the history of Nimes without draining your wallet dry? If you answered yes, the Nimes CityPass is worth considering. With the Pass, you can enjoy different museums in Nimes and roam through the city with the tourist train without waiting in a long line to get in. The Pass can be purchased for 2, 4 or 7 days in the Nimes tourist office near the amphitheater. The prices start at 29 euros.

Alternatively, you can buy a combined ticket, which gets you to the most important sights; Tour Magne, Maison Carrée and the amphitheater (Arenes de Nimes). The first Sunday of every month allows for free entry into the museums. 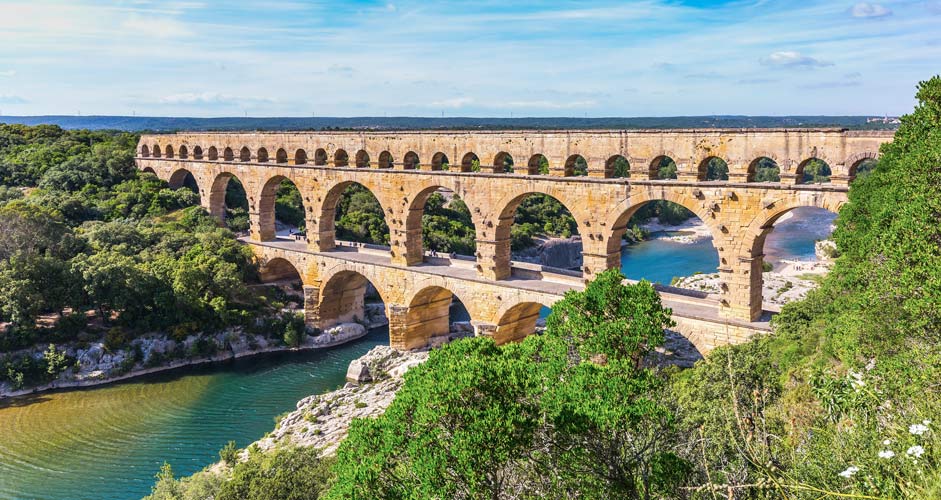 If you’re deciding to stay over for more than two days, you should head to Pont du Gard, a roman aqueduct which is located 30 km from the city center. It is one of the most remarkable buildings from the Roman times, a UNESCO world heritage site, and it is pictured on the back of the 5 euro bill.

Wander through the old town of Nimes and admire the remnants of what came before. Somewhere you might run into a crocodile statue, which is the symbol of the city, rooting back to Julius Caesars successful Egyptian military campaign. 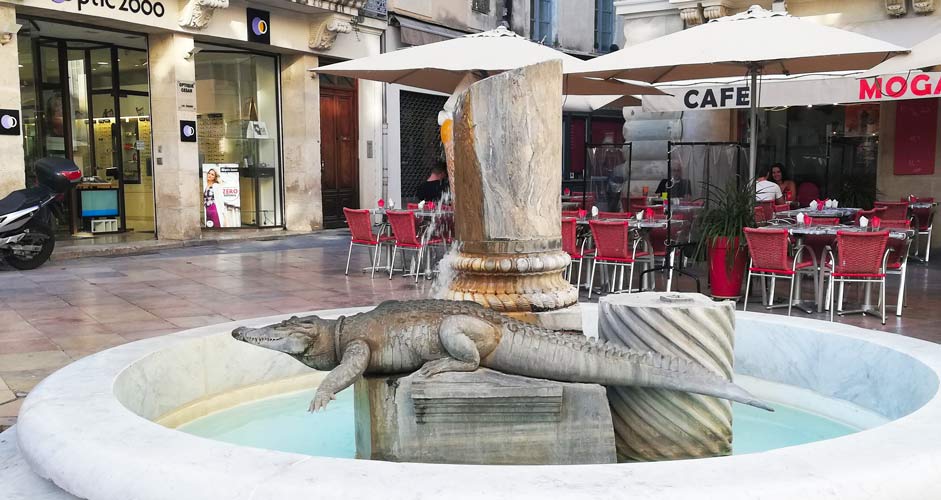 A crocodile is the symbol of Nimes – Photo: Katrin Lindenbauer

The impressive looking La Maison Carrée is a temple left over from the Roman times, inside which, through a movie, you can get to learn of the progress and historical facts about Nimes, for example where Nimes got its name. La Maison Carrée echoes the Roman era in a lively and encouraging way, which is why it also suits families with children. 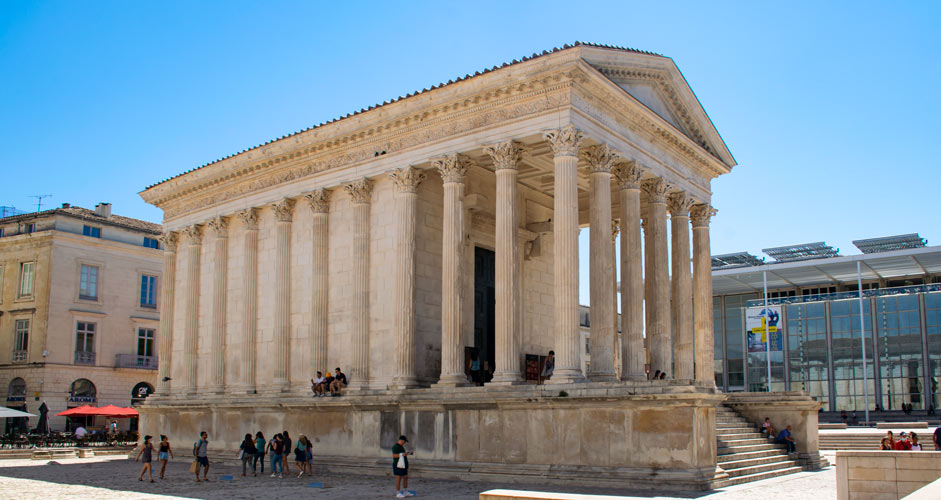 Jardins de la Fontaine is a vast park constructed over 200 years ago, where large patches of water serve a big role in its atmosphere. Two large monuments can be found in the park: Temple of Diana and the Magne Tower. Reserve plenty of time to walk around this magnificent place, or perhaps host a picnic there.

If you are heading towards the Magne Tower, you’ll notice there is a few stairs along the way. But the view of the park and later, the view of the city from the tower is worth the small hassle. Roaming through the park during the summertime might be a bit agonizing due to the heat, but thankfully there are a lot of resting places in the park. 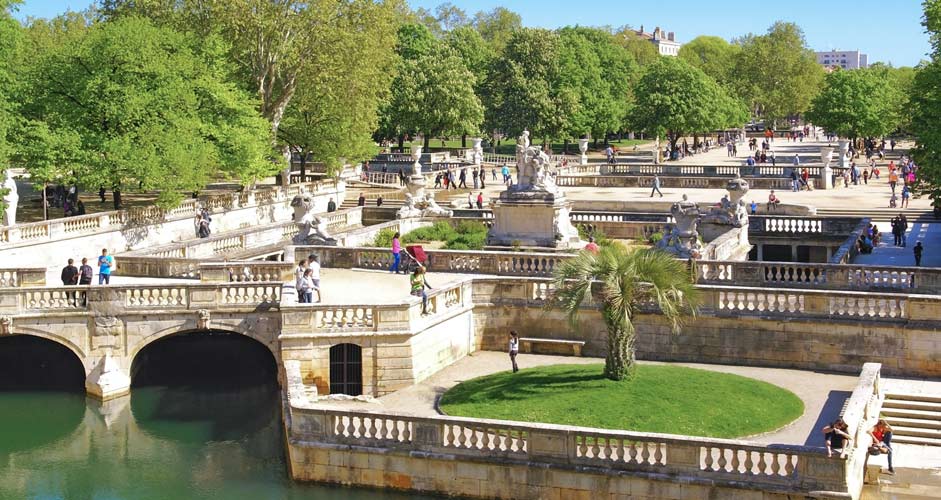 The Magne Tower, also known as Tour Magne is one of the many symbols of Roman influence in the city. Inside the tower, you’ll learn a recounting of the history of the Roman Empire as you begin the rise to the top of the tower. The top has little space, but you’ll have ample time to enjoy the view. The tower is less than half an hour away from the Jardens de la Fontaine street on foot. 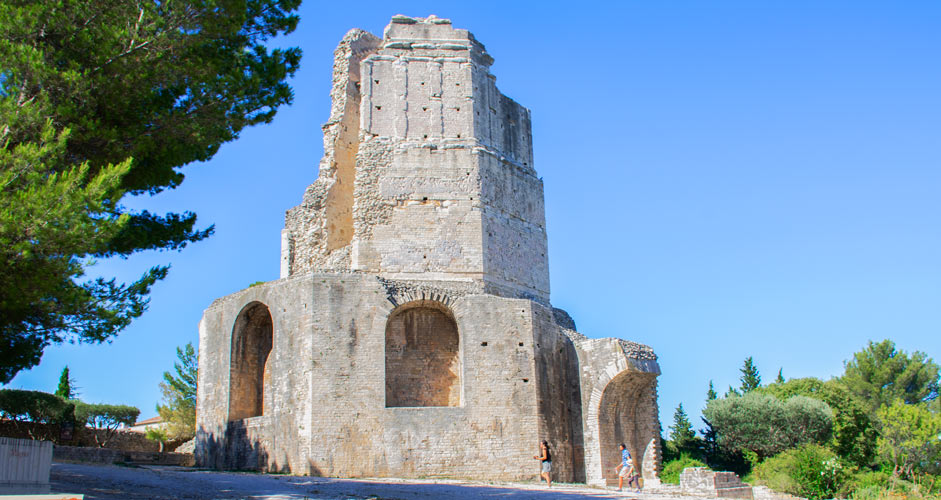 Built in the image of the Roman amphitheater, Arenes de Nimes, also known as the Nimes amphitheater, is one of the most well preserved of its kind. Inside you can discover interesting facts about the amphitheater and its changes overtime, its gladiatorial battles and bullfights, which are held to this very day. The Spanish bullfights are more known, although some cities of Southern France still hold onto this tradition. If you don’t get easily dizzy, you could climb the steps to the next to last top to get a great view of the city.

Different events are held at the arena, each having a unique atmosphere. This link will show what events are in store. You could also pay a visit to the nearby Musée de la Romanité, which offers very interesting facts about Roman history. 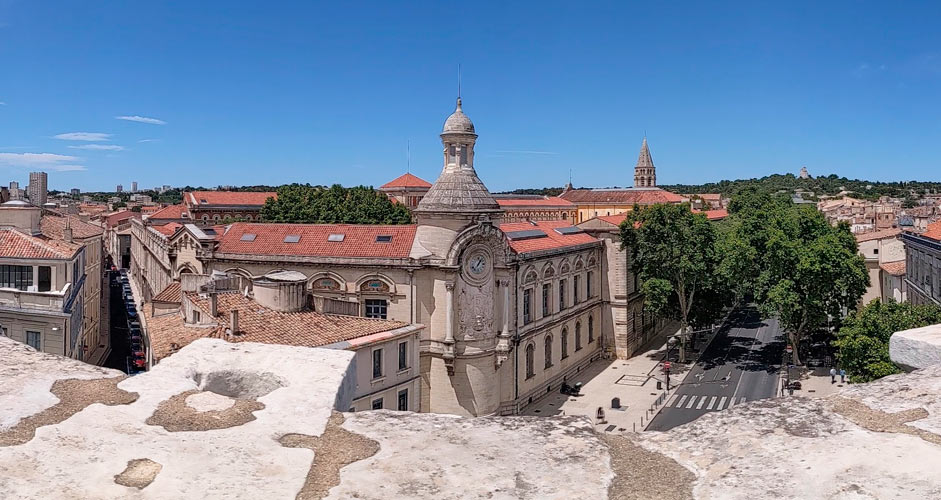 The Escattes Adventure is an interesting choice for families, who want to make their holiday a little more active. You can do wood climbing and complete different courses. There are different difficulties for the young and old, so enjoyment and excitement is guaranteed for every age group.

On the street of General Perrior you’ll find the Nimes mall, where the locals go shopping or meet to have a lunch. The mall offers various stalls and abundant amounts of local delicacies. The mall is the ideal place to try any of the many specialties of the French kitchen for a breakfast or even a lunch.

The shopping streets of the city center

If you decide to go shopping blind for something special or some souvenirs, pay a visit to the streets de l’Aspic, de la Madeleine or des Marchands. The luxurious boutiques have enough variety to fulfill anyone’s taste.

Although Nimes is a sunny place, where the shopping streets are fun to roam around, sometimes it is useful to find everything under the same roof. The largest shopping center in Nimes isn’t huge, but you can still find all kinds of shops there, which satisfies one’s shopping needs.

What kinds of souvenirs to buy from Nimes?

Les Croquants Villarets – biscuits are a perfect choice for snack enthusiasts. Croquants Villarets has been produced only in Nimes for 200 years. These crisp almond biscuits were initially born from finance problems. The confectioner and the inventor of this sweet only asked for 6 lira or 1,5 pennies. Because one couldn’t really get change from 1 and a half pennies, so these biscuits were given as a replacement.

The olive oil AOP Nîmes is manufactured from Picholine-olives, which are farmed on Nimes’ fertile lands. Olive farmers put a lot of emphasis on the quality of their product, which is seen in the areas’ oils. The oil of Nimes, which has been given the AOP-seal of approval, is a delicious idea as a souvenir for the friends of olive oils.

Nimes is a pretty straight forward city for a traveler. The nearby Gambetta-, Praha- and Victor Hugo-streets have a vast selection of restaurants for fancy dinners or a cozy lunch. Small alleys also offer options for tastes outside of France. The proximity to the Mediterranean can be seen in the Nimes kitchen. Local delicacies have a nuance of taste resembling strongly the Mediterranean kitchen. You can start getting familiar with these foods:

The nearby region of Camargue is not just known for its beautiful nature and mining for salt, for it’s also known for their black bulls. It’s not that rare that restaurants in Nimes usually include foods made from the meat of bulls.

La gardiane de taureau, a dish stewed in red wine, is an excellent choice for the lovers of meat. 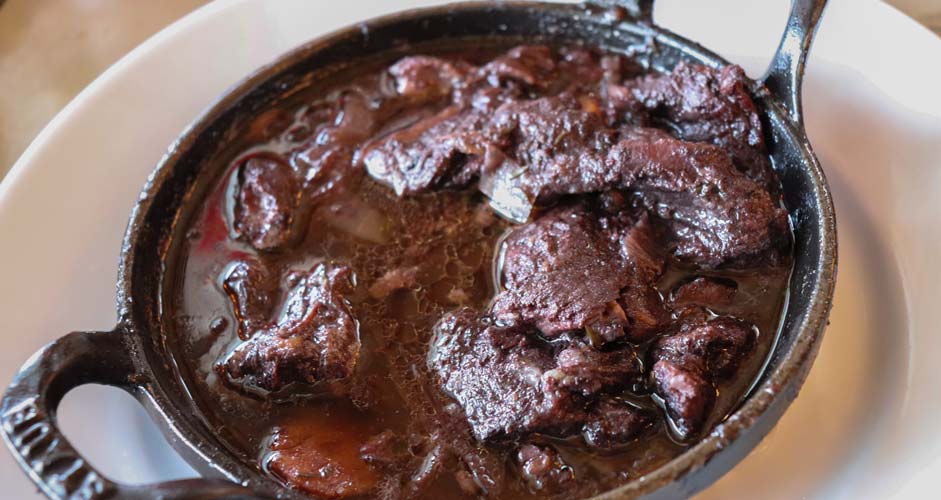 With aperitif, the locals enjoy bread with some cod spread on top; this dish is known as brandade de morue. It is made from oil, garlic and pieces of cod. The dish isn’t typical just for Nimes, it’s become hugely popular not only in France, but also Spain.

Le pate nimois is a short pasty filled with pork and veal, on which the crocodile, the city’s symbol has been stamped with. You can buy these pastries for example in the shopping center or any delicatessen found in the city center. 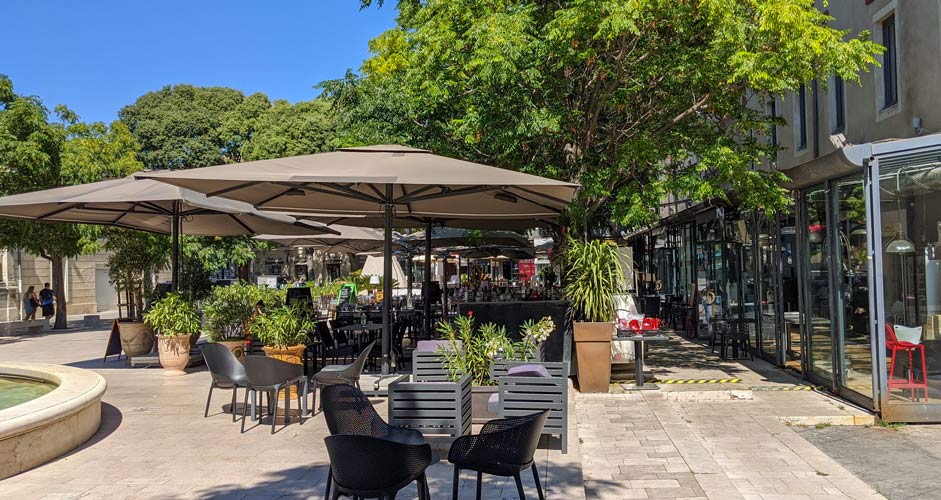 The squares and alleys of the old town are known for bustling with people at night. The nightlife in the city is impressive, especially during the summertime. There aren’t plenty of discos, but there are a bunch of nice bars. Especially in the de la Maison Carrée square and the streets of Boulevard Victor-Hugo, Rue Fresque, Rue Saint-Antonie and Rue de l’Etoile offer variety of places to spend the night.

Nimes is a wine region, which wines are known by the name Costières de Nîmes AOC. A glass of the region’s white-, red-, or rosee wine is a definite try during your visit.

Another typical drink in Southern France is the schnapps made from anise, pastis, which is usually also mixed in with ice water. The taste will require getting some used to, but if you like anise, pastis is a drink for you.

For about four weeks, the amphitheater of Nimes is used for showcasing national music. The music festival has a large selection of big names from the international world of music and some promising artists from different genres.

The Grand Roman games (beginning of May)

The era of the Romans still plays a respected role in Nimes to this day. The Roman games are one of the biggest antique-themed events in all of Europe. Over 500 participants from France and neighboring countries gather to create a Roman circus in the middle of the city, consisting of chariots and even gladiators. There also animations showcased during this grand event, booming with Roman spirit. More info at the Arenes de Nimes homepage.

Feria (the weekend after Pentecost to halfway of September)

Adding to the long list of traditions, Feria is a large folk festival which fills the streets of Nimes with people ranging from young to old. During Feria you can admire the bulls of Camargue and their guards. The entire city center becomes a part of a huge stage, where parades, bull riding and concerts are held.

Camargue - a nature reserve, where you can find animals, vast beaches and pink salt swamps.

Uzes – historical location, which has one of the best-preserved medieval buildings in Europe. 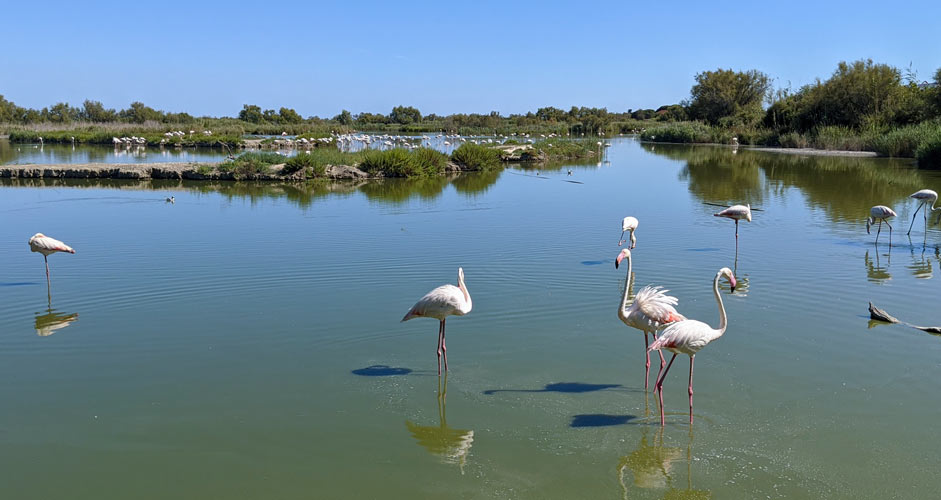 From the airport to the city center

The Nimes-Arles-Carmegue airport is small, and there are only a few flights. You can take a shuttlebus to the city center, which takes 30 minutes. On the official website for the airport you can find extra information about taxis and bus schedules.

Weather and the travel season

Nimes is one of the warmest cities in France. The best time to travel to Nimes is between April and September according to the weather.

Winter: The winter is cool, but not cold. The temperatures lower to minus-levels from December to January. Raining is common and it can snow from time to time. The temperatures range from 0 to 15 degrees Celsius.

Spring: The reasonably balanced weather brings tourists during the spring, when the weather is perfect for going outside. The temperature ranges between 15 and 25 degrees Celsius. You should prepare for shifting weather conditions and possible rains.

Summer: It isn’t rare that the degrees go higher than 34 degrees Celsius during June-, July and August. Due to the proximity to the Mediterranean, you could combine a swimming trip there with a visit to Nimes.

Autumn: During autumn, tourists come to Nimes considerably less often. October and November are both rainy. The temperatures are still very pleasing, especially from the start of autumn, where they range from 10 to 25 degrees Celsius.

All our destinations in France