Tapas - delicious Spanish food. Clear and simple, right? Well, perhaps not. This Tapas Guide covers all the essential myths, customs and traditions associated with tapas. After reading this you can head to a tapas bar with no hesitation!

Where does the name, Tapa, come from?

First of all, it is good to mention that tapas is the plural form of the Spanish word la tapa, i.e. a cover or a cap in English. The plural form is used throughout this guide. The official explanation for the word can be translated as follows: a small portion of food served with a drink.

There are many legends about the origins of tapas, most of which refer to tapas being placed on top of a bottle or glass of wine, covering the drink from uninvited, flying guests. On the other hand, the origin of the word is explained as hiding the effects of inebriation – or rather alleviating them – as is also the case in one of the first known stories of the birth of tapas.

In 13th-century Castile, King Alfonso X, "the Wise", found that the effects of wine start kicking in more slowly when eating at the same time. He thus ordained a regulation throughout the country that a portion of food should be served with wine. 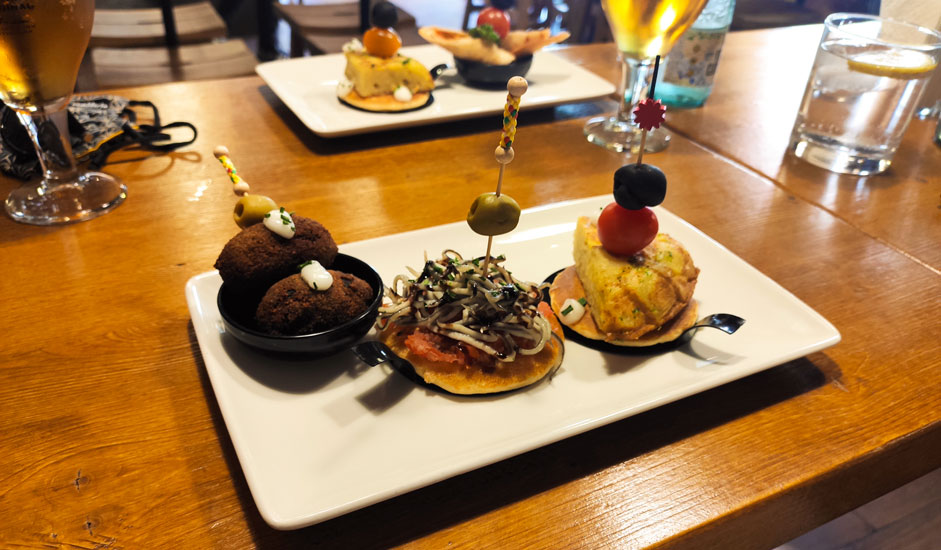 When and how are tapas eaten?

Tapas are still basically a small mouthful or a snack enjoyed with a beer or wine. In most of Spain, the house still offers some sort of tapas with a drink, just as Alfons X once ordered. The portion can range from potato croquettes to olives, or even to warm plates, as is common in Granada. Contrary to generous Granada, it is common in Catalonia to serve just potato chips or olives with a drink.

Tapas became more common after World War II, mainly due to lively tourism. Tapas bars have developed into specialized restaurants, even into fine dining establishments, that are great for tapas-tasting dinners.

In Spain, tapas are most often shared among the table. The size of the dishes varies wildly, so it’s worth asking the waiter for an estimate of the size of the plates. It is good to remember that you can always order more tapas! 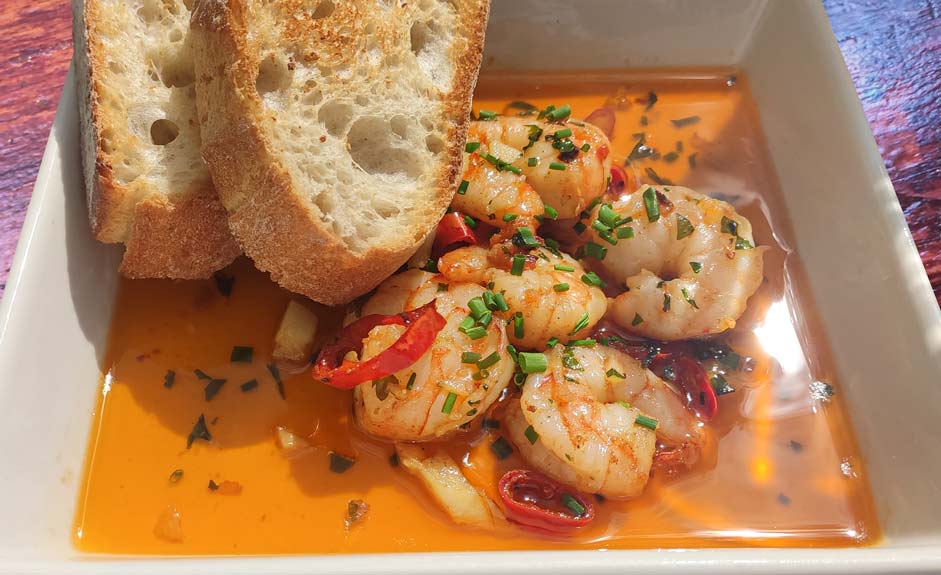 Tapas in different areas of Spain

Tapas culture comes from the southernmost province of Spain, Andalucia, but has spread throughout the country from there. Tapas are known by several names in Spanish, such as alifara in Navarre or poteo in the Basque Country.

Pinchos from the Basque Country are practically tapas, but the bread and its toppings are pierced by a stick, pincho. This Basque food art has since spread throughout the country. In pincho bars, dishes are usually attractively displayed at the counter, making overeating as easy as it gets.

The waiter/waitress behind the bar either puts the pinchos directly on your plate, or alternatively gives you an empty plate, in which case you collect the pinchos by yourself. In this case, the bill is often calculated from the empty pincho sticks on the plate. However, you should always check the practice of the particular bar with the waiter, as each bar has its own practices. 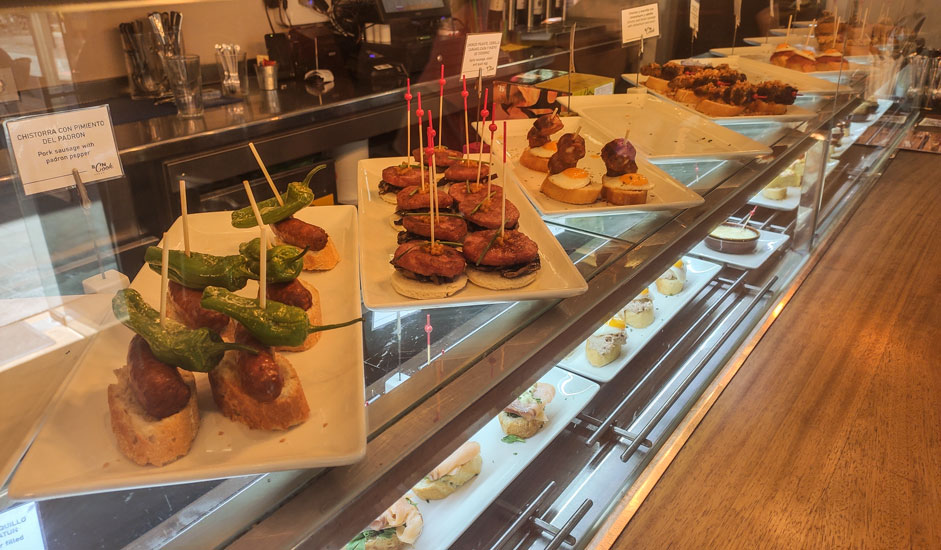 An assortment in a Pincho bar.

Jamón, or air-dried ham, deserves its own section, as it is one of the most common and beloved tapas. A good ham is dark red in color and contains white fat that just melts in your mouth. It should not be confused with Jamón York, which is cooked ham.

Jamón is cut with a long knife from the shank. Cutting the ham into translucent, intact slices is a matter of honor for the waiters - and not just any novice is allowed to do the job.

Hams are categorized according to the breed of pigs:

In addition, hams are divided into three main types of feeding and living conditions:

The most expensive and tasty of these is Jamón ibérico de bellota, which costs between EUR 100 and EUR 200 per kilo even in shops. The ham is perfectly preserved, making it easy to take home as a gift. Enrique Tomas, with shops all over Spain, specializes in its sale.

Some of the most common tapas