In Barcelona, the best areas for your accommodation will depend on your holiday plans. While there are plenty of well-suited areas, bear in mind that they come in different styles and locations. 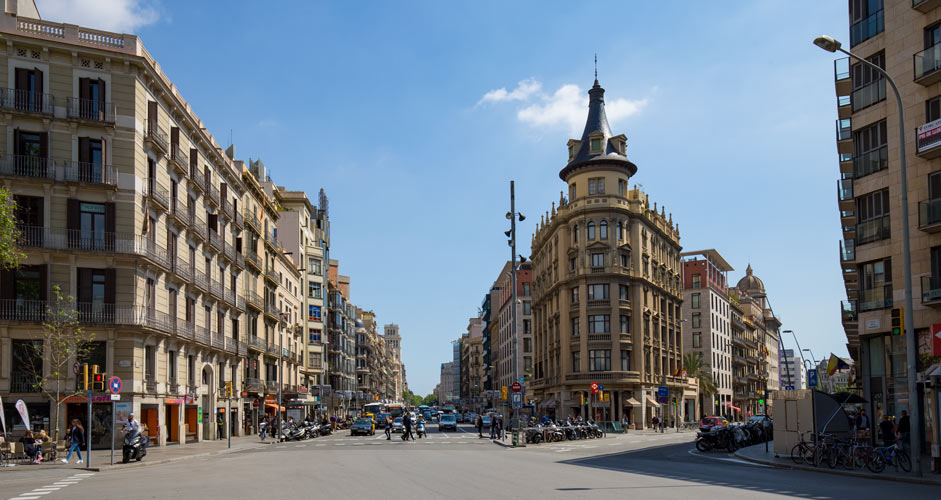 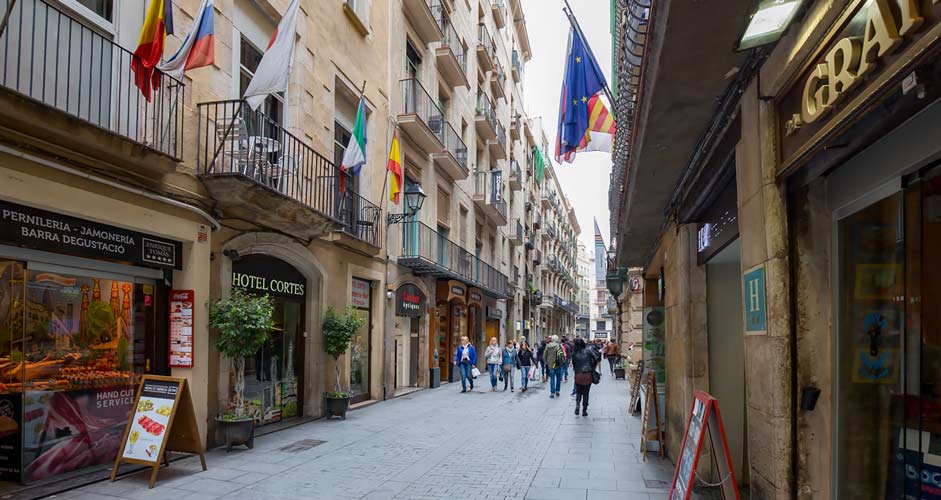 The narrow streets of Gotic are characteristical to Barcelona

The Gothic Quarter consists of narrow streets, which are one of the characteristics of Barcelona. These streets are filled with trendy bars, clubs and restaurants as well as large crowds of people, especially in summer. If you enjoy some peace and quiet, it’s better to avoid the Gothic Quarter.

In the Gothic Quarter, shopping possibilities range from smaller artisan shops to big chains. One of the best shopping streets of Barcelona is called Portal de l'Angel that begins from Catalonia Square, and you’ll find most big clothing brands there. Gothic Quarter has a busy nightlife, which tends to divide opinion; some love the vibrant streets while the rest might wish to stay away.

+ Great selection of bars and restaurants

Born is probably the trendiest neighborhood of Barcelona, regardless of whom you ask. You’ll come across a great selection of cocktail bars and fusion tapas restaurants. It’s among the most expensive parts of Barcelona, but nonetheless much more affordable compared to London or Paris. So, there’s no need to be afraid of high prices.

There’s more open space in Born than in the Gothic Quarter, sparing you from the same claustrophobic feeling. In summer, however, the streets are packed in Born, too. On the eastern side, you’ll find the Ciutadella park, which is a nice place to go for a picnic or a stroll.

The lower Born is closer to the harbor, and the beach area is already within walking distance. + Lots of fresh and trendy bars and restaurants

Raval is a lively neighborhood day and night. If you're searching for a peaceful place to stay, you better look elsewhere. Here, life happens at the streets. A major part of the population of Raval is of ethnic minorities. Raval is differentiated from other neighborhoods of Barcelona by its bright colors and exotic aromas filling the streets.

Raval has a huge variety of bars and restaurants with all cuisines represented. Especially North African and Indian/Pakistani restaurants are very common. The upper parts of Raval, roughly between the streets Tallers and Carme, are cleaner and more touristy than lower Raval, unfolding from Carme to Parallel.

Raval has the reputation of being ragged and run down, dangerous neighborhood. Although the area has undergone a facelift in recent years, the not-so-bright side of life is still evident. You’ll have to pay extra attention to pickpockets in Raval, as the narrow streets attract a lot of them. If you’re staying in Raval, you’re staying pretty much in the center of Barcelona. 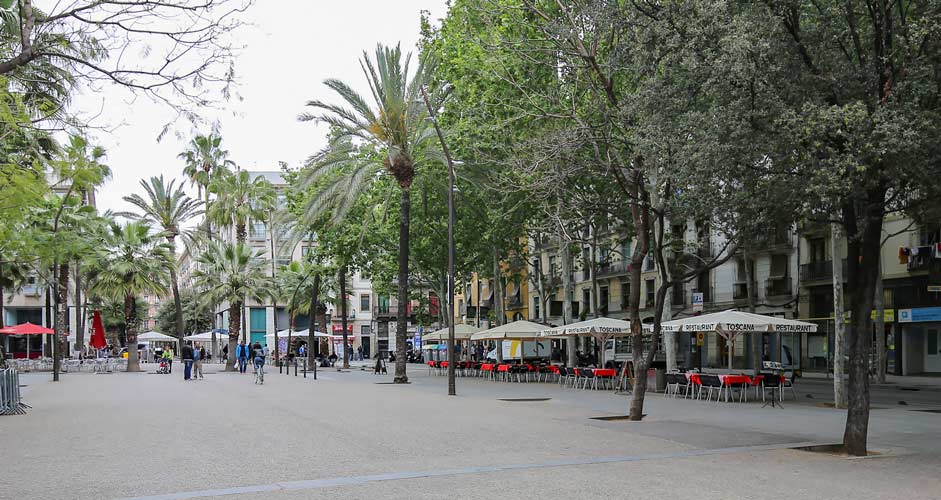 + Great selection of nice restaurants and cheap bars to choose from

Poble Sec is one of the Barcelona neighborhoods becoming trendier each year. Earlier recognized as ragged and poor, the new Poble Sec hosts some of the newly opened gourmet restaurants and trendy bars. The lower part of Poble Sec, situated close to the harbor, is only a 5-10-minute walk away from La Rambla. The upper part, next to Plaça d’Espanya, is already quite far from the center.

The heart of Poble Sec is the Blai street, which is packed with very affordable pintxo and tapas bars. The best way to enjoy the street is to have tapas in one place and then move to the next. The streets in Poble Sec are steep, as it lies in between the Montjuic hill and Parallel street. The closer to Parallel street you are, the less there is to climb.

+ Reasonable price level relative to the proximity to the center

The neighborhood of Sant Antoni belongs to Eixample district, and you’ll find it just between Raval and Plaça d’Espanya. If you stay closer to the Raval end of Sant Antoni, it doesn’t take longer than 15-20 minutes to walk to Catalonia Square. So, it is pretty central. You can find lots of small trendy cafes and cozy bars in Sant Antoni. Also, there’s a great restaurant selection, and the prices are cheaper than in the center. Some of the finest restaurants of Barcelona, owned by the famous Adriá brothers, are located in this neighborhood.

The streets of Sant Antoni are significantly bigger than in Gothic Quarter, Raval or Poble Sec, which provides a feel of security. The metro lines L2 and L3 are connected to Sant Antoni. As with any areas west of the Catalonia Square, the beaches are a bit far away.

Sant Antoni is very recommendable, if you want to stay close to the center but away from the most hectic streets. In summer, especially the center of Barcelona gets very crowded, but the masses don’t reach Sant Antoni.

+ Reasonable price level relative to the proximity to the center

The metro lines L1, L3 and L5 as well as various bus lines go through Sants. In Sants, the hotel prices are usually very reasonable, even during the seasons with prices rocketing sky high in the center.

The Barcelona main train station, Barcelona-Sants, is located here. Therefore, if you’re only staying for a night or two in Barcelona and continuing your journey further by a long-distance train, Sants might be your pick. Sants is also convenient if you want to go to the beach in Castelldefels, where you’ll be able enjoy finer sand and cleaner water than in the beaches of Barcelona.

You will find local bars and restaurants in Sants, but it is not famous for nightclubs or trendy bars. You will find also decent shopping possibilities in Las Arenas shopping center and Carrer de la Creu Roberta. 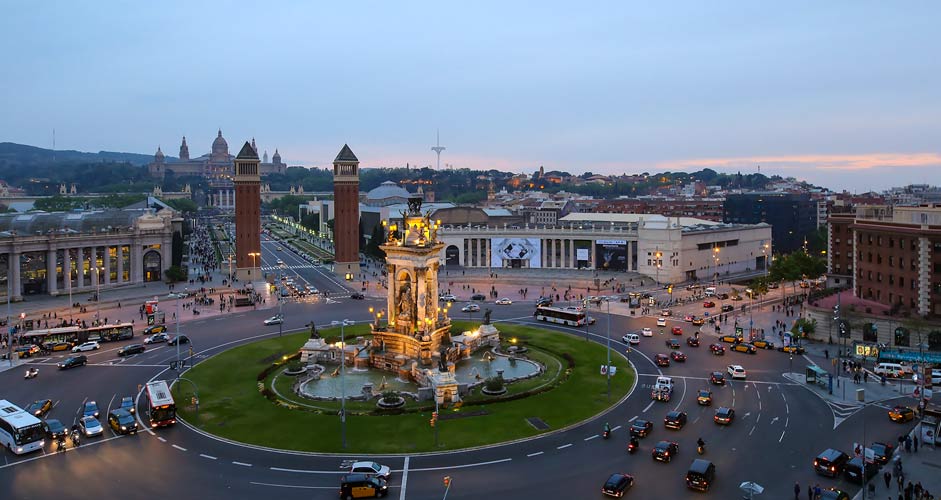 + Cheaper accommodation, restaurant and bars than in the center

The area to the west from Passeig de Gracia shopping street is called Eixample Left. You’ll find more trendy bars, nightclubs and restaurants in Eixample Left than on the opposite side, in Eixample Right. Eixample Left ends at Plaça d’Espanya, so if you choose to stay closer to that side, the distance to the center is significantly longer.

On the other hand, you’ll most likely find better hotel deals closer to Plaça d’Espanya. The Eixample left is known as the center of the gay scene of Barcelona. There are a lot of gay bars and night clubs around in the neighborhood. 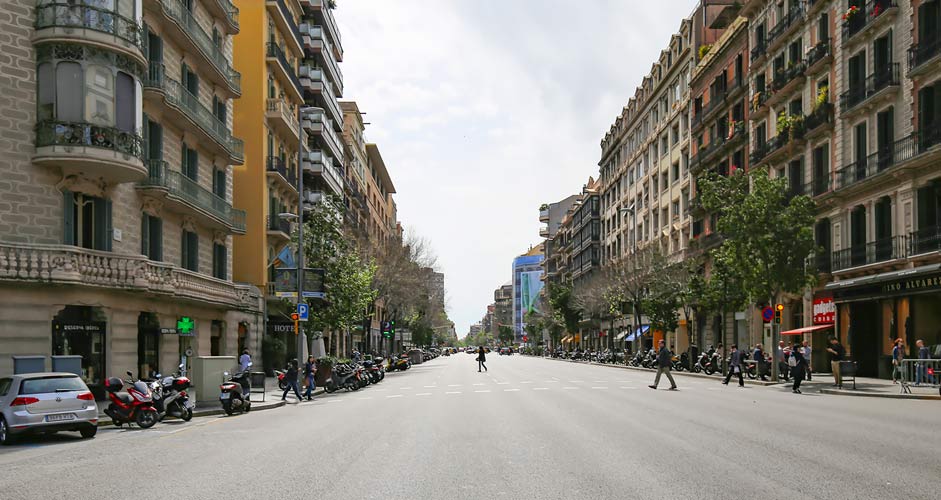 + Proximity to the center (areas closer to Passeig de Gracia)

The area to the east from Passeig de Gracia shopping street is called Eixample Right. The area feels like an even mix of residential apartments, local businesses, hotels, bars and restaurants; none of them really stands out from the rest. Characteristic to Eixample are the big and broad streets.

You’ll find a nice selection of restaurants & bars there, with the price level above the average. The metro lines L2, L3 and L4 go through the area, so it’s well connected. If you’re looking for nice quality accommodation in a quiet neighborhood, yet close to the city center, Eixample Right is a suitable area. 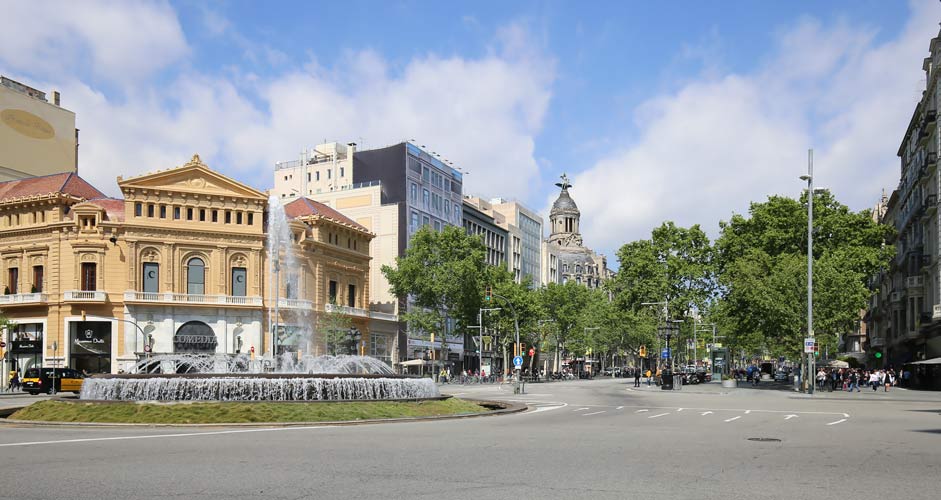 The neighborhood of Gracia is located to the north of Eixample. Its lower parts, areas near Corsega street, are quite close to the center. Gracia is a very local neighborhood with a hippy, easy-going atmosphere. Respect the local norms and don't act rudely, and you’ll fit right in. There are lots of small local bars and a good selection of restaurants. The price level in Gracia is lower than in the center.

The benefit of Gracia is the cheap local accommodation, yet the city center within walking distance. If you stay further away from lower parts of Gracia, the streets get more hilly. If you don’t like walking uphill, it’s better to stay elsewhere.

The neighborhood of Barceloneta lies next to the beach. Barceloneta beach is not right in the city center, but it’s the closest nonetheless. Therefore, the whole neighborhood is very busy in summer. Since there are other nice locations closer to the center to be found, it’s probably not worth staying in Barceloneta, unless you’re planning to spend a lot of time on the beach. The restaurants in Barceloneta concentrate mainly on seafood, and generally you’ll be served the freshest seafood of the whole city.

The metro line L4 takes you from Barceloneta metro station to Urquinaona, a 5-minute walk away from Catalonia Square. Passeig Joan de Borbó is one of the most famous bar and restaurant streets in town, located in the Barceloneta district

Another neighborhood located right at the beach is Vila Olimpica. The beaches are slightly less crowded than the ones in Barceloneta. The music fills the beach promenade in the evening, as the nightclubs open their doors. The most famous nightclubs of Barcelona, such as Opium and Pacha, area located in this area.

The entrance to Barcelona Zoo is basically on the Ciutadella Park, on the side of Vila Olimpica. The streets in Vila Olimpica are big and not crowded, so it's a family friendly zone to combine the beach and the city experience. The metro line L4 has a stop in Vila Olimpica. There are many nice seafood restaurants in the Olympic harbor in an attractive setting facing the harbor. 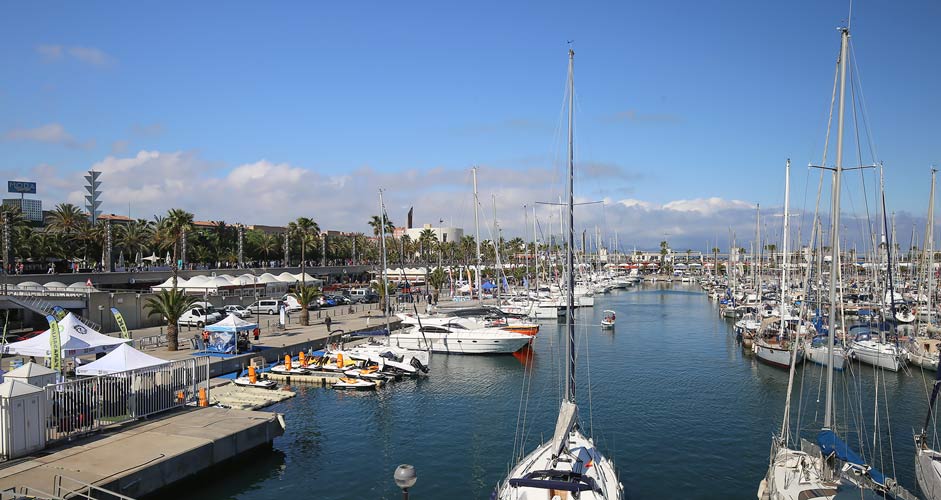 - A bit off from the city center

Poblenou is a vast area, and it’s vital to determine exactly where you want to stay there. Poblenou is surrounded by the sea, so there’s plenty of beach line to choose from. The further away from the center you go, the less people there usually is. In general, Poblenou works well for families or people who wish to have a quiet holiday at the beach, and occasionally go to the center of Barcelona.

Another suitable area with a good selection of nice hotels, is the Diagonal Mar area, very close to the beach. One of the biggest shopping centers, Diagonal Mar, offers great shopping possibilities and a variety of restaurants.

+ Calmer neighborhood compared to the center

- Far away from the city center

Other Categories in Barcelona