Herceg Novi is a combination of an idyllic mountainside Old Town and a several-kilometer-long seaside promenade with great sunbathing and swimming opportunities. The centuries-old fortresses and the diverse towns of Igalo and Meljine spice up the area. Both Igalo and Meljine belong to the Herceg Novi Municipality.

During the Yugoslav era, Herceg Novi was the most popular Montenegrin holiday destination. Since then, other destinations have surpassed Herceg Novi in popularity, making the streets and the beaches less crowded. In summer, Herceg Novi hosts several festivals and events, ranging from classical music to opera and movies. 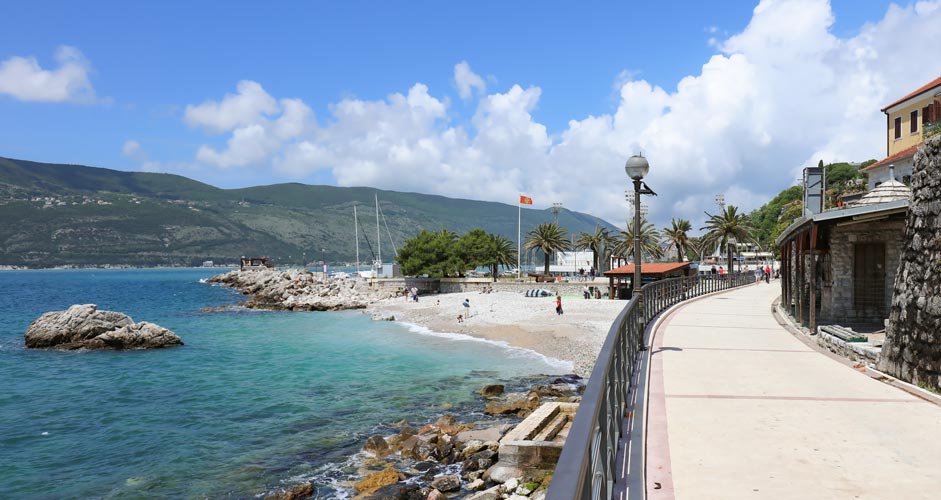 The Old Town is located on a mountainside almost straight above the Herceg Novi harbor. It also constitutes the center of the town, and it is a matter of taste as to how far from it you should book your hotel. Bear in mind that the whole town area of Herceg Novi is located on a rather steep uphill, except for the seaside promenade. If you don’t like climbing up and down the stairs all the time, do take the elevation into consideration. In that sense, the promenade is the best choice for accommodation.

Igalo, which is situated west of the Old Town, is a more tourist-oriented area. Thus, booking a room from somewhere in between Igalo and the Old Town might be a good idea. Or, if beach activities are your priority, perhaps you might want to consider picking a room all the way from Igalo. Igalo is within walking distance from Herceg Novi, and via the promenade, you might not even notice as to when Herceg Novi ends and Igalo begins.

Meljine, which is situated east of Herceg Novi, also has a harbor and beaches but it is much more quiet than Igalo.

Find a suitable hotel from the map provided by Booking.com

Things to do in Herceg Novi

The entire Old Town, Stari Grad, is located on a mountainside. It consists of small alleys, a cozy square and three churches. The upper and lower ends of the area contain a fortress.

Even though the surface area of the Old Town is small, you’re constantly required to climb stairs, making it a bit of an effort to explore the area. Therefore, it’s no wonder that Herceg Novi is also known as the city of 100 001 steps.

The clock tower is the western gate to the Old Town

The surface area is very small, only 150 meters in width and 300 meters in length upwards. West of the Old Town, there’s a small, busier area next to a clock tower with clothing shops, banks and other services available. The square can be seen in the above picture. 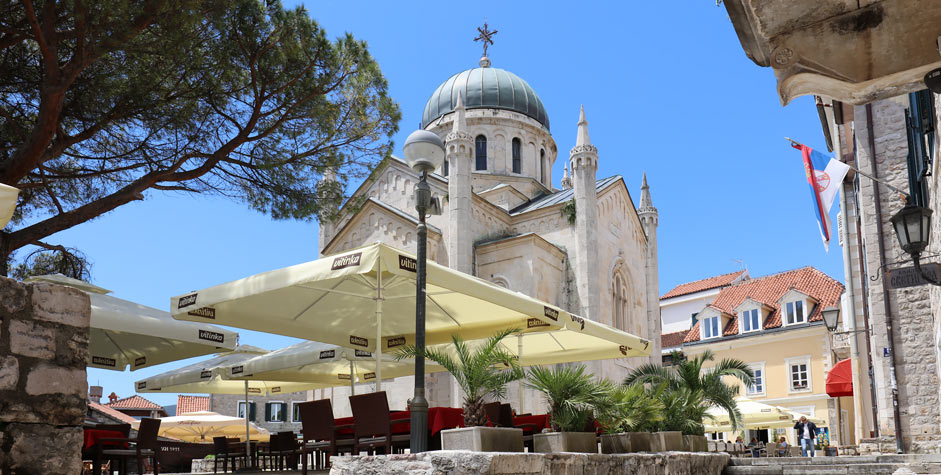 The fortresses above and below the Old Town can be accessed for an entrance fee of a couple of euros. Both of the centuries-old fortresses have been rebuilt several times after wars and natural disasters.

The lower of the fortresses is called Forte Mare, which translates into Sea Fortress. It is situated directly above the promenade, as shown in the picture below. You’re allowed to walk freely on the walls and towers. From the Sea Fortress, there’s a beautiful view over the Bay of Kotor and Herceg Novi.

The fortress higher up, Kanli Kula, is a wider complex, which served also as a prison and an execution place in the past - hence its name, Bloody Tower. The amphitheater on the top level of Kanli Kula is a venue for film festivals and concerts. Also here, there’s free access to walk on the walls and towers, and the view is even better than from Forte Mare.

The amphitheater in Kanli Kula

From Kanli Kula, it is possible to continue another 550 meters to the top, which contains the unmaintained Fortress Spanjola, the Spanish Fortress, covered with wild-growing plants.

Some maps indicate Fort Citadela southeast of the Sea Fortress. It is a part of a defensive wall, which you can visit for free when walking past it along the promenade.

The western end of the seaside promenade is situated in Igalo. From there, it stretches eastward to Meljine, which is located east of Herceg Novi. It is a cozy street with restaurants, shops, beaches and beautiful views almost throughout its entire length. After sunset, the promenade changes into a perfect area for having a nice dinner, especially on the Igalo side of the promenade.

There are restaurants, shops and beaches or sunbathing areas along the promenade

The Local Museum of Herceg Novi exhibits versatile historic items, such as antique furniture and paintings from the area. The museum is easy to find – just head to an underpass along the promenade between Herceg Novi and Igalo, and then follow the stairs up to the museum. The distance from the harbor to the underpass is approximately 700 meters.

The museum is located in an old palace.

The currently operational Savina Monastery is situated east of Herceg Novi close to Meljine, on the northern side of the main street Brace Grakalican.

The Mamula island fortress as well as the Blue cave are both popular day trip destinations. The latter one is a cave with clear water, and it is accessible by boat. Depending on the type of the boat, the trip may include the possibility of swimming. Bear in mind, however, that not all boats are suitable for going into water for a swim, and therefore you should check it in advance.

In addition to car transport, the inner parts of the Bay of Kotor are obviously accessible by boat. There’s more on this in the following articles: Kotor, Perast and Tivat. The church island in front of Perast, Our Lady of the Rocks, is another popular day trip destination.

There are plenty of sea kayaking tours on offer around the Bay of Kotor. The destinations are mostly the same as with the boat trips, with half a day or a full day in length. This is a well-suited option to combine an active holiday and seeing attractions.

There isn’t an actual main beach in the town. Instead, the town has small pebble beaches and concrete sunbathing areas one after the other, equipped with deckchairs, sunshades, bars and restaurants. Deckchairs require a fee, and some of the beaches and concrete piers are owned by hotels, and as such they’re are private. The water is very clear, and the bottom drops off rather quickly.

While the western neighbor, Igalo, may have an abundance of swimming places, the Herceg Novi has less of them.

The beaches in Herceg Novi are mostly areas made of concrete

Compared to Herceg Novi, Igalo is much more touristy. There’s a lot of restaurants, pebble beaches and concrete sunbathing piers along the promenade. While the promenade is aimed at tourists, there’s also plenty of fun for kids, ranging from bouncing castles and arcades to a mini race car track. Sun hats and fridge magnets are being sold in every corner.

The beaches in Igalo are somewhat better than the ones in Herceg Novi. The shore gets shallower towards the west. The westernmost parts are not particularly beautiful, but due to the shallow water, you’ll be able to walk a long way before the water reaches even your waist.

Meljine is a small harbor town east of Herceg Novi. The town area is composed of the harbor and a couple of beaches.  Meljine is located by the same seaside promenade that goes via Igalo and Herceg Novi. The beach closer to Herceg Novi (in the picture) has more space than the narrow main beach on the other side of the harbor. The main beach can be very busy during the summertime. Behind it, there are a couple of smaller beaches and concrete piers.

The widest beach in Meljine is located by the seaside promenade

West of the Old Town by the clock tower, there’s a small, concentrated area with shops, banks and a vegetable market. More stores, barber shops etc. are to be found along the Njegoševa street, westward from the aforementioned area. The sea promenade has mainly tourist items on offer.

Herceg Novi is situated mostly on the hills

Herceg Novi is a very affordable destination with regard to European standards. The prices in tourist destinations are always slightly higher than in the rest of the country. Yet, the prices in Herceg Novi remain more modest compared to, for example, Kotor.

The only items that are not below the European average are clothing and shoes. Especially the prices of famous brands are equivalent to Central Europe.

Below, there are some examples of restaurant and hotel prices. The prices of hotel rooms refer to median prices at Booking.com.

The distance to the Tivat international airport on the other side of the Bay of Kotor is 23 kilometers. In between, there’s a short ferry ride, which can be avoided by going around the Bay of Kotor. With regard to views, it is a nice route, but it doubles the driving distance.

The Dubrovnik airport in Croatia is situated 30 kilometers away. Bear in mind that you have to cross the border, which can take up to 2-3 hours in the busy summer traffic. In quiet times, however, it could only take a couple of minutes. The airport of the capital, Podgorica, is situated 147 kilometers away.

The busiest time of the year in Herceg Novi is during the months of July and August, when all services are open. These are also the hottest months, and it might be more comfortable to explore the Old Town in spring or autumn. It is possible that deckchairs are brought to the beaches only as late as in June, when the holiday season really kicks in. 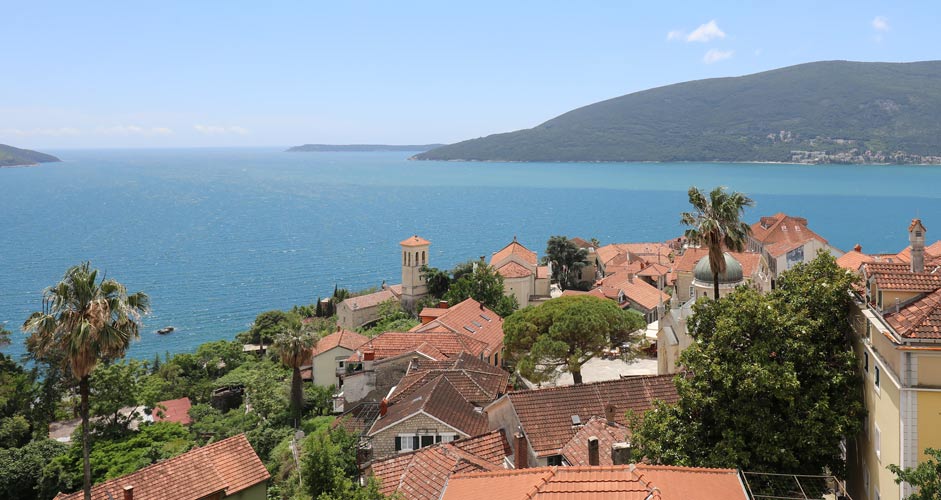 A view from the Kanli kula fortress.

Winter: It is cool and often rainy in winter. The highest daytime temperatures change between 12 and 16°C and may even drop below 0°C during the nighttime.

Spring: In March, it rains less, but temperatures remain rather low. In April, 20°C is exceeded regularly, but evenings remain cool. In May, daytime temperatures may be equivalent to summer, but the weather is unpredictable.

Summer: Summers are hot, and especially in July-August, there’s very little precipitation. Temperatures rise close to 30°C in June and above that in July-August. At night, temperatures are around 20°C.