Mdina is a small fortified city with beautiful buildings, narrow alleys and thousands of years of history. This former Capital of Malta is also known as the Silent city, since there are hardly any cars inside the city walls. In the Middle Ages, it was known as the Noble city.

Rabat, meaning suburbs in English, is a local village next to Mdina. Rabat also refers to larger municipality around the village. Like Mdina, Rabat is an important part of the early development of Malta. The main attractions in Rabat are catacombs that can be visited in several different places. 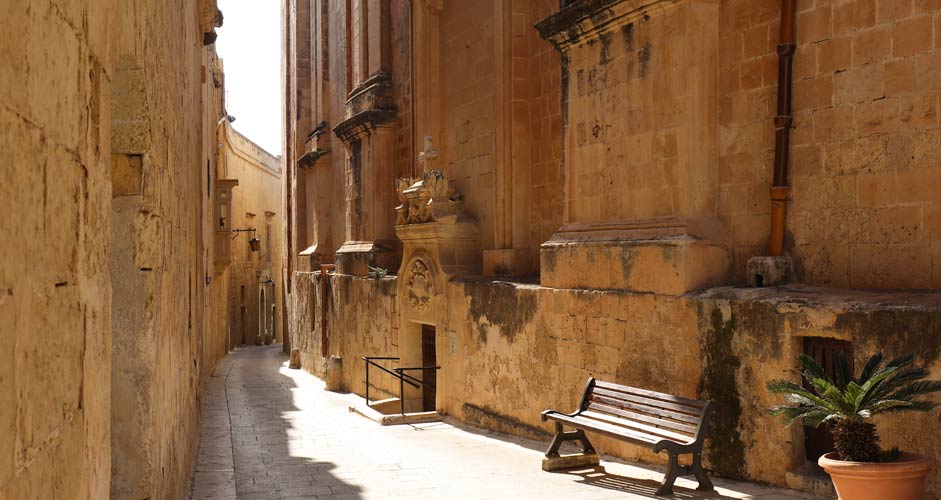 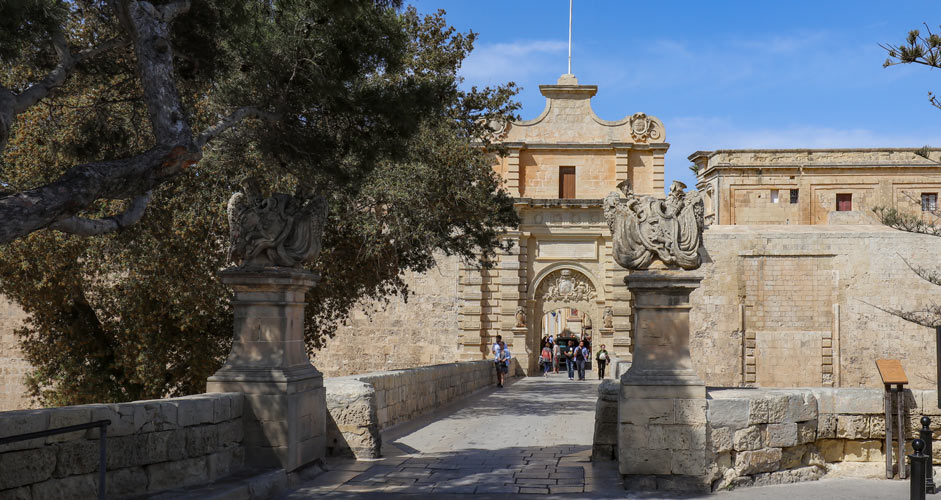 The main gate to Mdina

The distance between the center of Rabat and Mdina gate is only 700 meters, so the interesting area for tourists is rather compact and it doesn't matter much where to find a hotel.

There’s a rural, descending landscape surrounding the centers of Mdina and Rabat.

Slideshow of Mdina and Rabat

Things to do in Mdina 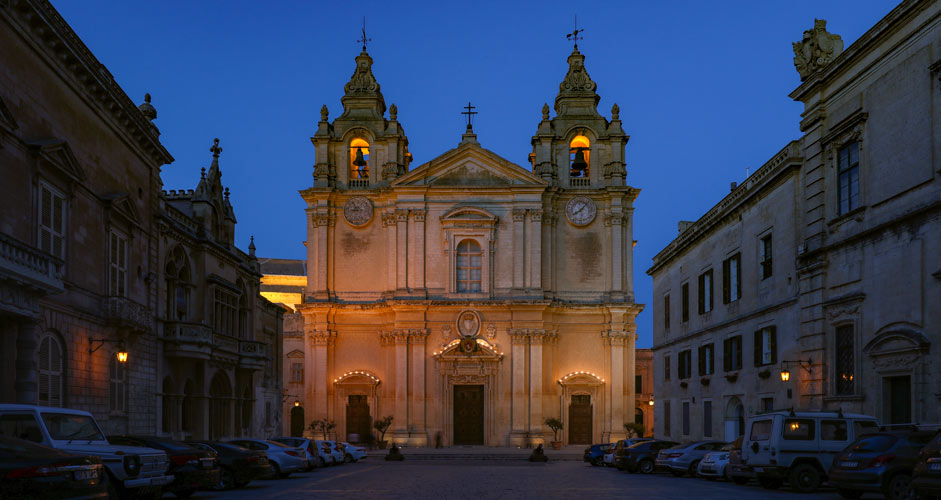 St. Paul's Cathedral (Mdina Cathedral) is located on the eastern side of Mdina inside the city walls. A ticket is needed to enter the cathedral. With the same ticket, it's also possible to visit the impressive Cathedral Museum.

There are museum and exhibitions in an old palace.

Location: At the northern end of the main street Villegaignon.

Roman Villa contains a museum and ruins of an old house from the Roman Empire. It’s also known as Domvs Romana.

Location: Right outside the Mdina walls by the airport bus station. 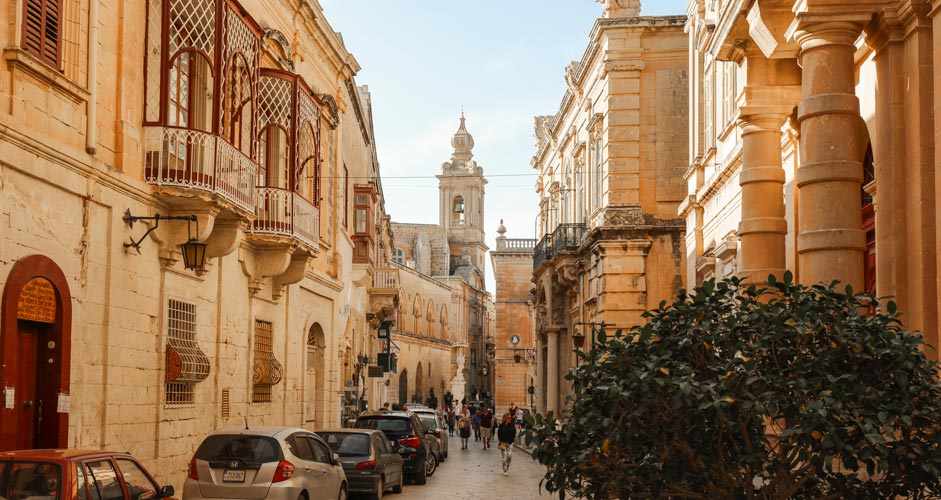 Triq IL Villegaignon is the main street of Mdina

Things to do in Rabat

Three attractions with the same ticket: 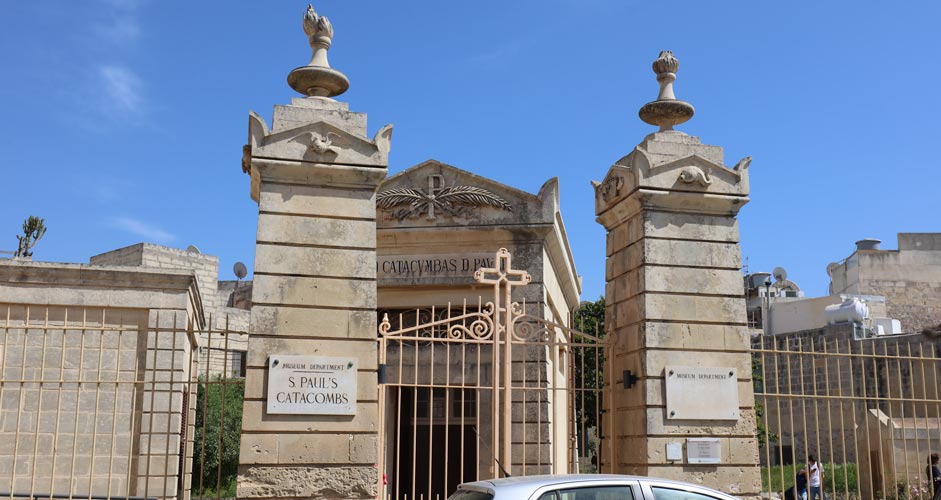 Unlike in other catacombs in Rabat, in St Paul, many of the tombs have aboveground parts on top of them. In addition, there’s an underground network of catacombs.
The area is spread on both sides of the street. The ticket office and visitor center are located on the left-hand side when coming from Pjazza San Pawl. The same ticket gives access to the gates on the opposite side of the street.
Despite the name, this place has nothing to do with St. Paul's Grotto and catacombs.

The main attraction in Agatha's Historical complex is the short but informative guided tour in the catacombs. The network of tunnels under Agatha is bigger than in other places in Rabat, but only about 10% of them are open for visitors. There’s more to see here compared to the other catacombs, including well-preserved frescoes and an altar in the crypt.

Agatha's catacombs are easily accessible through the inner yard

On the street level, there’s a small but diverse museum that includes items ranging from religious paintings to prehistoric remains.

Website: stagathamalta.com
Location: It's located in a small inner yard. The alley leading to it looks like this on the Google Maps Street View. If you rotate the street view a little, you can see St Paul's Catacombs across the street. 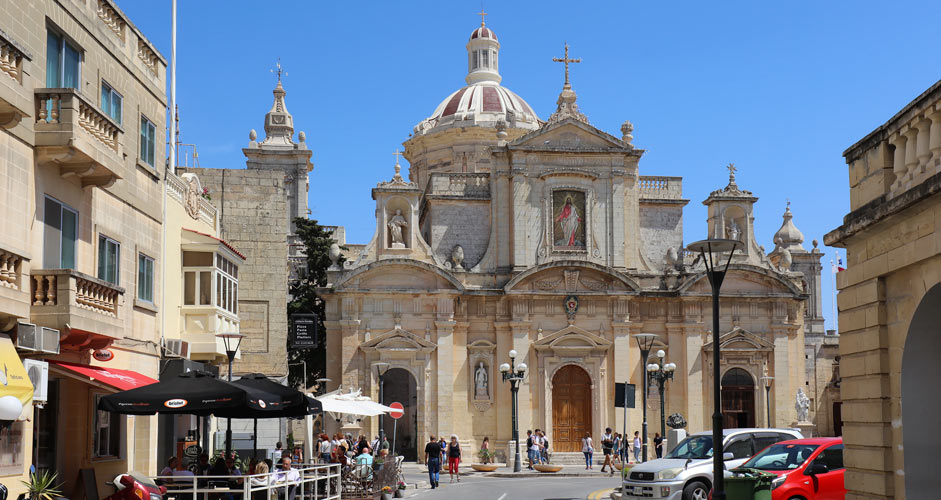 This beautiful church is located at Pjazza San Pawl. Typically, it’s open for public only for a few hours a day. In the spring of 2018, it opened at 5 p.m., and only the smaller side doors on both sides of the church were open. No admission fee is required.

This is a smaller and more modest church close to Pjazza San Pawl. If you wish to take a quick look at catacombs in general, you can do so under this church in just minutes. The admission fee is voluntary.

Malta airport is located 10 kilometers away from Mdina and Rabat. Check for timetables here.

Line X3 runs through Mdina and Rabat, and then continues northwards to Bugibba. The return route is almost the same. The bus stops are indicated under the heading “Ir-Rabat, Malta” on the timetables. Click the plus sign to unveil them, and make sure you’re watching the table for the correct direction: to (Bugibba-Ajruport) or from (Ajruport-Bugibba) the airport.

“Rabat 2” is shown on the Google Maps Street View here. Rotate the view 180 degrees, and you’ll see the “Rabat 4” stop, with a bus standing there. In case you’re wondering the position of the buses on the street, remember there’s left-hand traffic in Malta.