In Vienna, most of the attractions are located close to each other and, therefore, you can conveniently visit them on foot. The best things to do in Vienna are related to the reign of the Habsburg family – the palaces of the time and the gardens surrounding them. 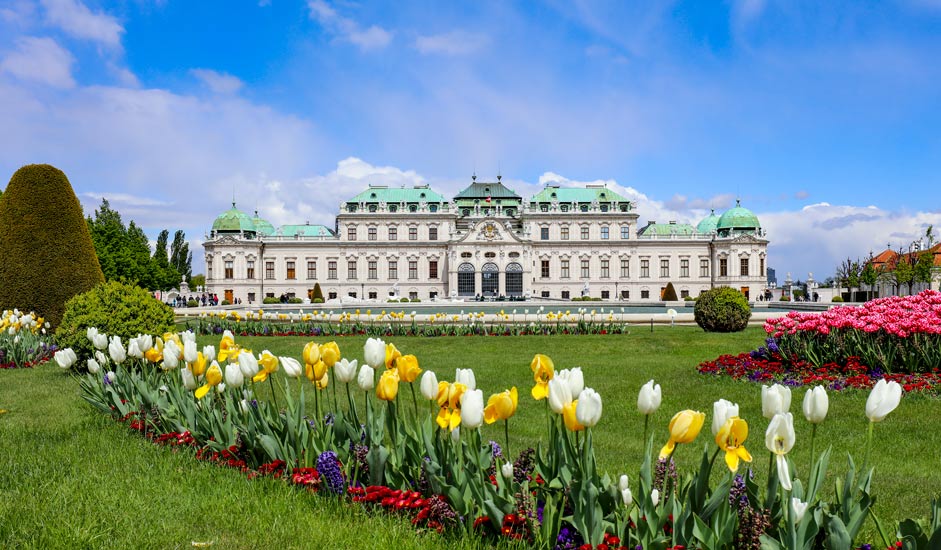 The Belvedere palace area contains two palaces, Upper and Lower Belvedere, with a garden and fountains in between. Both palaces host exhibitions with world-famous art pieces, but especially Upper Belvedere is an attraction on its own.

There’s free access to the garden. It’ll take some 30-45 minutes to stroll through the garden, including the areas on the other side of Upper Belvedere. A fee is collected to gain access to the palaces.

Belvedere is situated south of the city, 1,5 kilometers away from Stephansplatz at the heart of the Old Town.

Schönbrunn Palace is probably the most impressive attraction in Vienna. It’s the only attraction clearly outside the center, but it’s a must-see sight if you’re staying for more than a day.

The fantastic gardens alone take easily a couple of hours to stroll through. The area is over a kilometer long and almost just as wide. The other end is mostly covered with forest. There’s free access to the garden, but the palace and other attractions require a fee.

The metro line 4 (green) runs close to the palace area. The correct stop is Schönbrunn, which is 600 meters away from the entrance on foot. Trams and buses can get you closer.

There are no pictures of Schönbrunn on this website, since it’s a private area with strict rules concerning pictures. Photos for personal use are allowed. 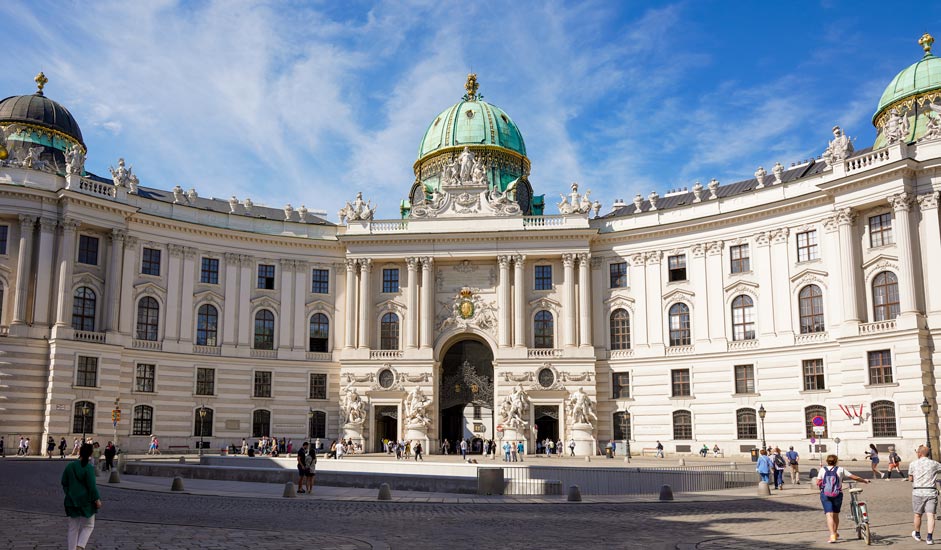 St. Michael's Wing of the Hofburg

The Hofburg is the former imperial palace of the Habsburg family, located right in the center of Vienna. The Hofburg has been expanded several times, and thus it consists of several buildings, all of which are wings of the current palace. Some of them were built separately and connected to other parts of the palace later. Therefore, the palace complex is far from symmetrical.

Today, the parts of the palace function as museums, among other things.

The easiest way to get a sense of the ancient splendor of the Hofburg Palace is via the Sisi Museum, which is divided into three parts:

An audio device will be included for listening to more information of the rooms in different languages, as you tour at your own pace in all three destinations. The rooms and the information are numbered accordingly. You can also download the guides in advance as audio or pdf here.

If you're planning to visit the Schönbrunn Palace, and if Sisi's clothes or the palace's silverware are not your main priority, you might want to skip Sisi Museum, as Schönbrunn contains dozens of royal rooms. If Schönbrunn is not on your itinerary, the Sisi Museum is certainly a really good option.

The ticket office to the Sisi Museum is situated in the middle of the building shown in the picture above. If you have already purchased the ticket on your phone, or if you have Vienna Pass etc., you can enter through the courtyard of the same building. The entrance can be seen in this picture behind the statue by the red flags.

4. Parks in the city centre 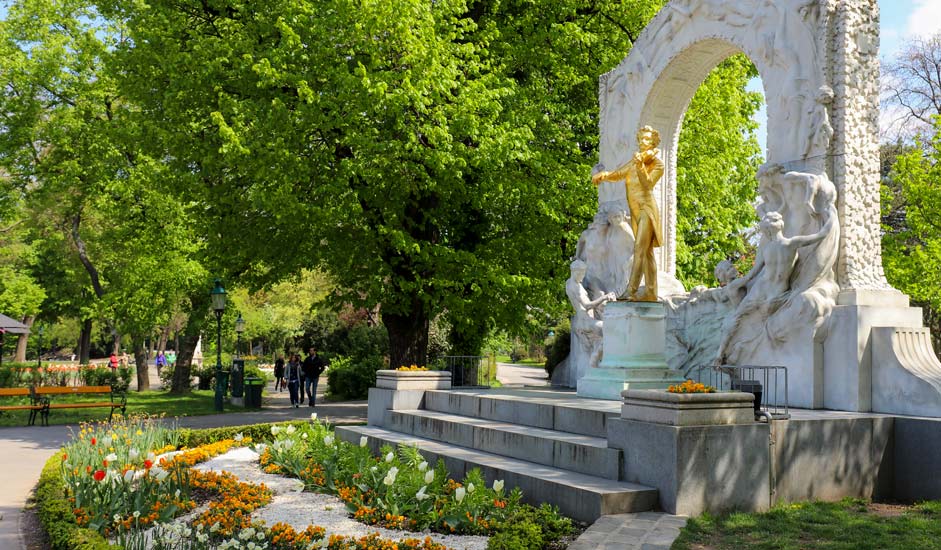 The Johann Strauss monument in Stadtpark.

Stadtpark, Vienna City Park in English, is situated southeast of the Old Town by the Wien Mitte train station. The park serves as a great area to stroll around and relax in the shadows of trees.

In the middle of it, there’s a small pond with plenty of benches and statues (Johann Strauss in the picture) around. There are also grass areas for having a picnic. Coffee and refreshments are sold in kiosks and carts on wheels. 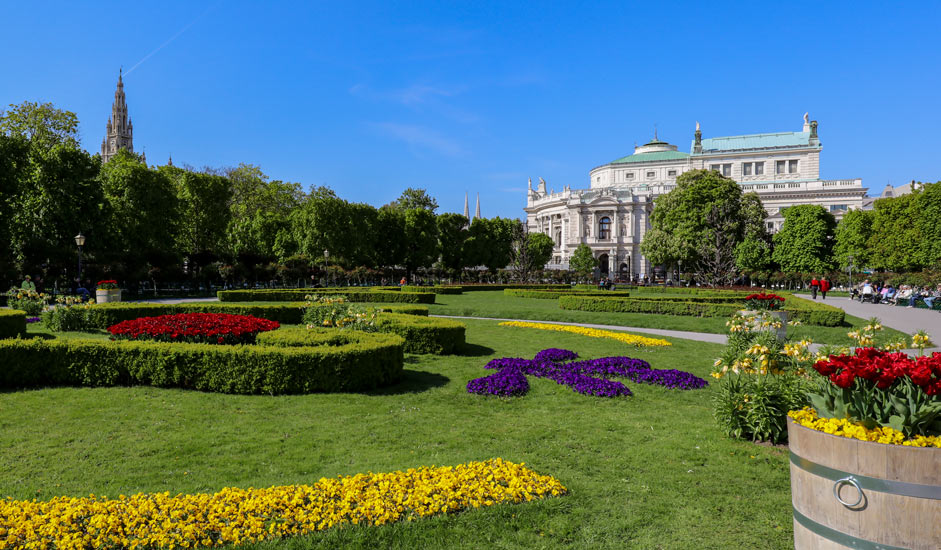 Volksgarten, People's Garden in English, is situated opposite the parliament building. It’s a beautiful and well-maintained park with fountains, a rose garden and plenty of beautiful plants.

You can’t miss Volksgarten, if you’re near City Hall, Parliament building or Hofburg, as it lies right in the middle of them.

In the backyard of Neue Burg, there is a small park, which is a popular place to hang out in the evenings, and why not during the day, e.g. in the form of a picnic. Burggarten has a small pond and a few statues, but otherwise it's just a well maintained grass area suitable for relaxing.

Naschmarkt is about a half kilometer-long market area south of the city center, between Linke Wienzeile and Rechte Wienzeile.

Areas closest to the center are dedicated to food. Vegetables, fruits, spices and drinks are on offer everywhere. There are also restaurants one after another. Naschmarkt serves as an interesting alternative to restaurants in the center, especially during chilly evenings in spring and fall; most restaurants have heaters on the terraces.

In areas farthest from the center, there’s all kinds of miscellaneous stuff on offer on saturdays. The only limit is your imagination as to what you can find.

6. Guided tours in the famous buildings of Vienna

As stated, you'll have plenty of things to do within a small area, with three famous building pretty much next to each other. Only the opera house is some 1.5 kilometers away from the others. 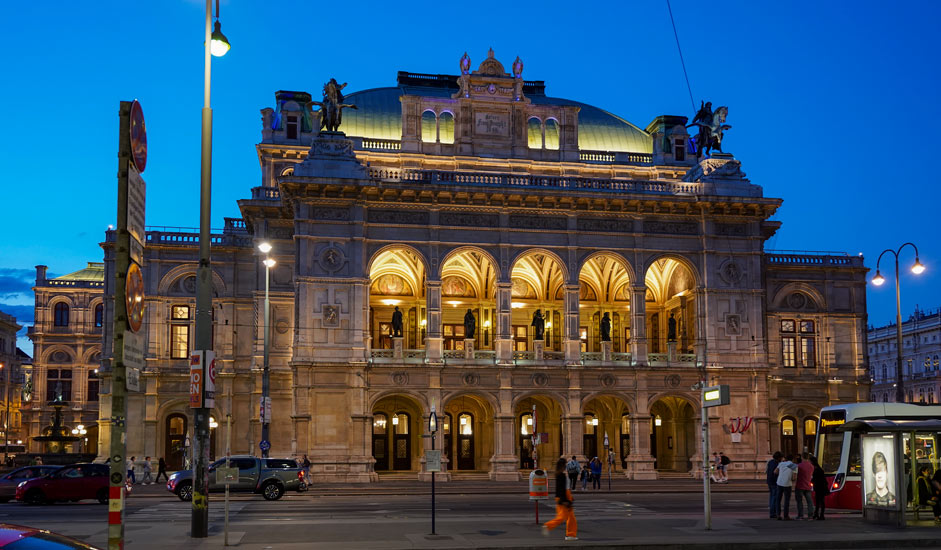 If you want to get to know the interiors as well, you can reserve a guided tour to these:

The Parliament House is currently (in 2022) under renovation and, therefore, the tours are spread over the different buildings, where the Parliament currently operates.

Vienna is not exactly among the best-known beach resorts in Europe. However, it is quite possible to enjoy beach-life in Vienna, if you combine the city's swimming pools and swimming beaches with the beach restaurants of Neue Donau.

Restaurants by the river

You can dip your toes in the sand while sipping a drink in the center, too, if you choose one of the beach bars by the canal. Some bars have even had sand brought into them to add to the atmosphere.

However, the surroundings of the central Donaukanal are not nearly as attractive as by the wider and clearer Neue Donau. Therefore, it is better to take the metro to the Donauinsel station (red line 1) and head to the banks on either side of the river north of the station. If necessary, you can easily switch sides via the Ponte Cagrana bridge, which connects the restaurant/bar areas of both sides. 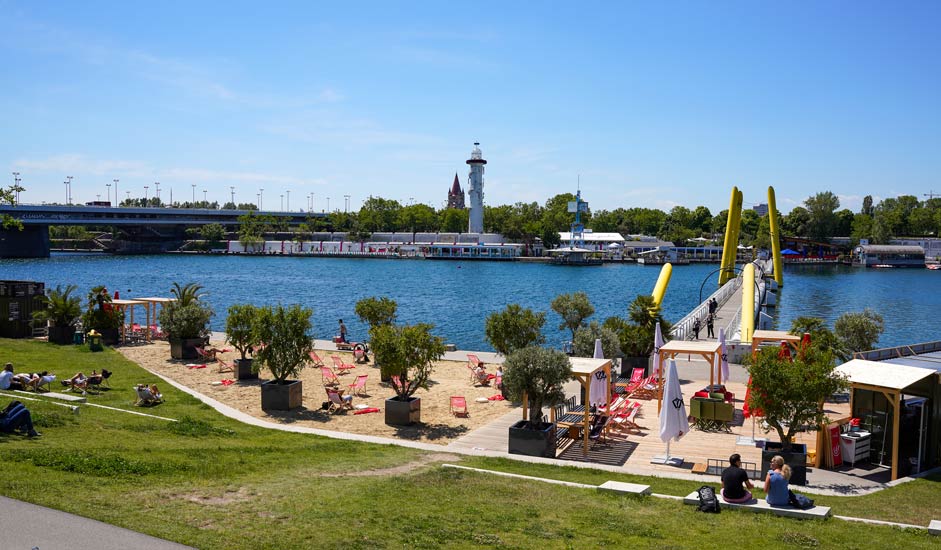 A bridge connects the two sides of Neue Donau.

Many restaurants and food trucks open already at lunch time and close around 10-11 in the evening. Bars may stay open until 4 in the morning. You can also rent water sports equipment in the area.

There are several outdoor spas, Freibads, in Vienna. Some contain gravel beaches, too, with access to swim in the Danube. These are referred to as Strandbads, In Alte Donau, a dammed tributary of the Danube, there are two popular Strandbads: Alte Donau and Gänsehäufel that is located on an island. 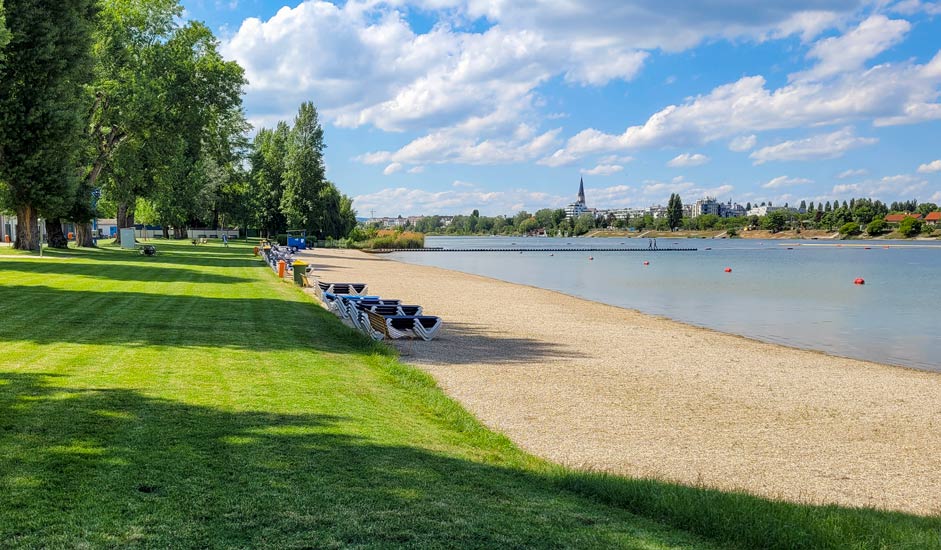 Strandbad Alte Donau gravel beach in the beginning of June.

Gänsehäufel is a larger complex covering almost the entire small island. It has better recreational opportunities than Alte Donau, and although there are also beaches on around the island, they are not quite as good as the ones in Alte Donau. Due to longer distances on the island, Gänsehäufel is better suited for staying the entire day, while Alte Donau is a fit for a 1-2-hour swimming trip. Gänsehäufel also contains swimming pools and a wave pool.

From the Alte Donau Strandbad, it takes a couple of kilometers on foot to the aforementioned restaurant area through the pleasant park area of Donaupark. So, after a swimming trip, it is easy to have a meal or drinks nearby. On the map, you should take Copa Beach as your destination. The distance is about the same from Gänsehäufel from another direction.

8. Things to do in Vienna for families

The Prater amusement park is situated on the other side of the canal, in the Leopoldstadt district. The amusement park contains a planetarium and the Madame Tussaud Vienna wax cabinet, among other things. There's no entrance fee to the area, but equipment involves a cost. 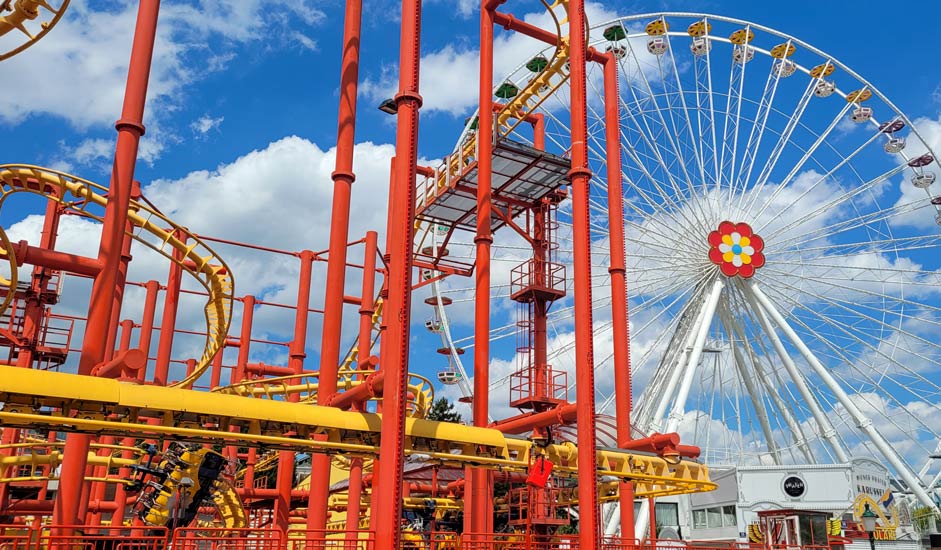 It takes a few hundred meters on foot from the Praterstern metro station to the main gate. For more information, read here.

The Schönbrunn Zoo, located in the area of the Schönbrunn Palace, is the world's oldest zoo still in operation. For more information, read here.

Right in the center, next to the Burggarten park, you'll find a small tropical greenhouse with large butterflies flying around.

Haus des Meeres, i.e. House of the Sea, is a versatile aquarium in the Mariahilf district about a kilometer away from the center. The nearest metro station is Neubaugasse (line 3), a couple of hundred meters away. The tall building is not hard to find.

The largest playground in Vienna. Location: 10 km from the center. The nearest metro station, Rennbahnweg (line 1), is one kilometer away.

A dream place for miniature model enthusiasts, with cities, trains, etc. in miniature. Location: near the city center, 200 meters away from the nearest subway station (Kettenbrückengasse, line 3).

Also note the Swimming beaches and pools chapter in Things to do in Vienna section above, which would also fit into this section.