In Barcelona, the best locations for photography are often associated with Antoni Gaudi, who lived and worked in Barcelona for most of his life. The two most visited sites in Barcelona are the Sagrada Familia church and the Parc Güell public park, both of which are Gaudí's masterpieces. 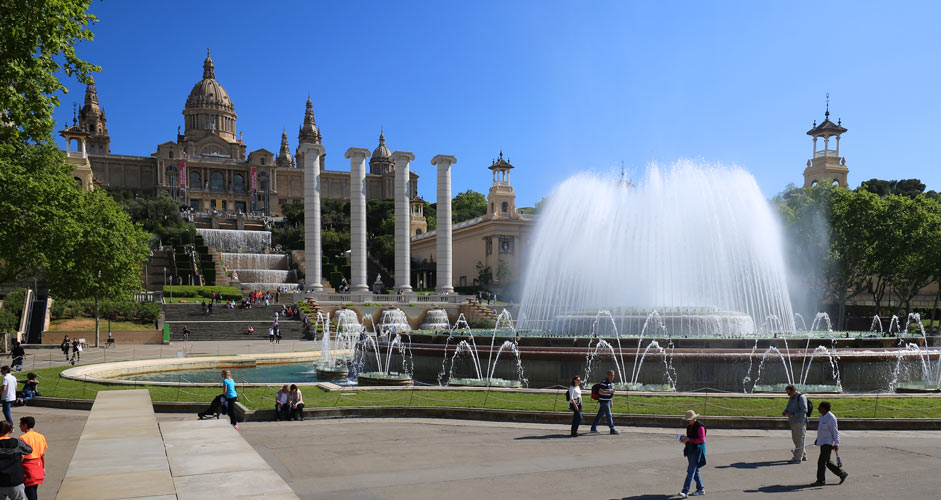 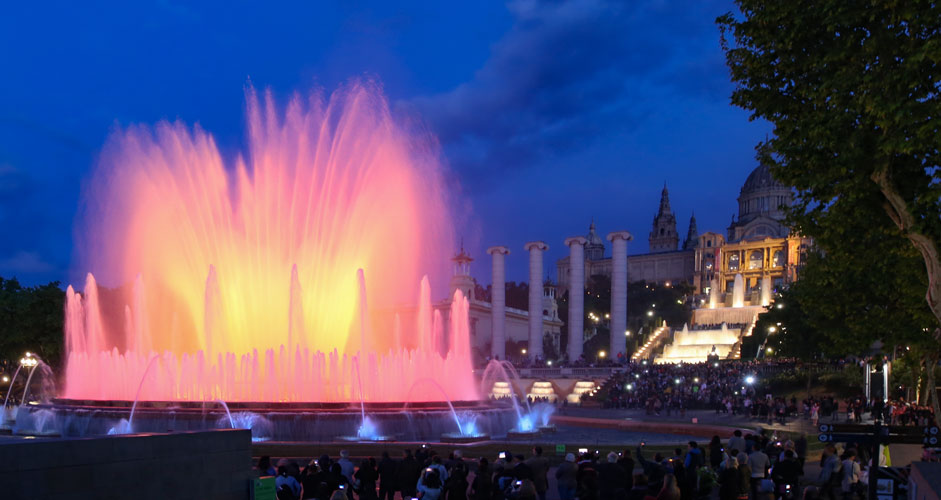 The large fountain in front of Museu Nacional d’Art de Catalunya transforms into something magical at night. The water of this Magic Fountain dances to the beat of lights and music, as Freddie Mercury and Montserrat Caballé perform Barcelona in the background.

In the evenings, there are smaller fountains around the area to enjoy. The area offers many great perspectives for photographs, regardless of whether you are shooting in the evening or during the day. Also consider going higher to the front of the art museum, with a clear vision of the whole area, mountains and, possibly, a sunset in the background. On the way up, there's an escalator available for some parts of the way. 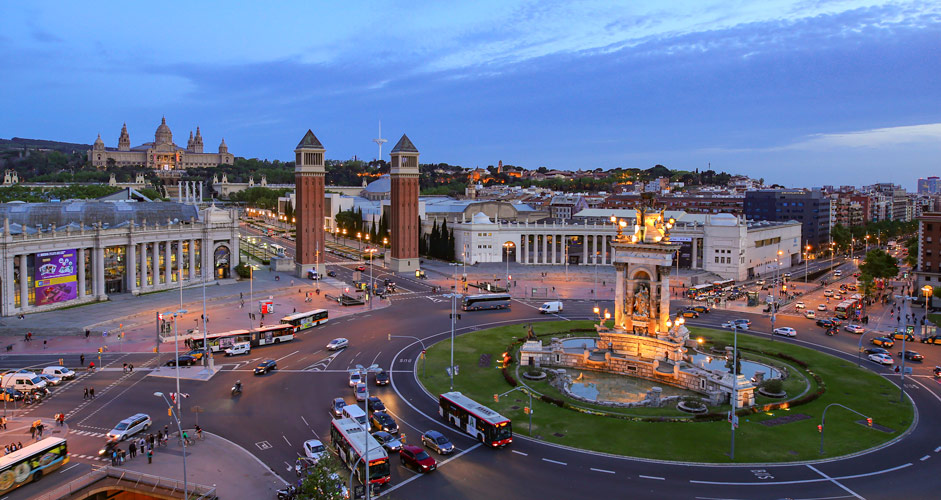 Las Arenas is a former bullring that has served as a shopping mall since 2011. Its rooftop pedestrian terrace provides great views, especially in the direction of Plaça d’Espanya.

In the background, you can see, e.g., the aforementioned art museum.

The roof can be reached by a paid elevator, but almost as easily and for free, by the escalator of the shopping center. Hence, the elevator is not worth it, especially if queuing is needed. There is a protective metal fence on the roof, which is a bit of a nuisance when shooting, but you can still take pictures via the gaps between the bars. 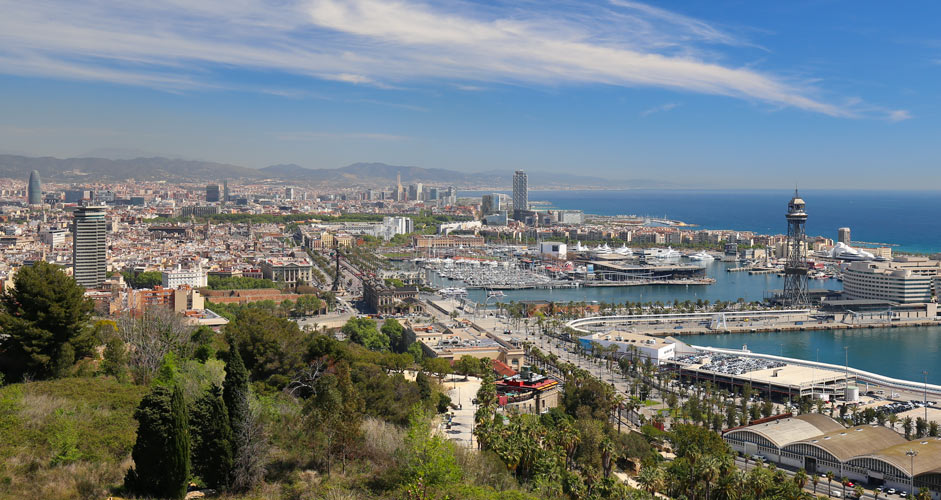 The Jardins del Mirador vantage point, northeast of Montjuïc, offers great views of Port Vell Harbor and over Barcelona. For early birds, this is also a great place to photograph the sunrise – although for that purpose, the vantage point lower down by Hotel Miramar may work better. 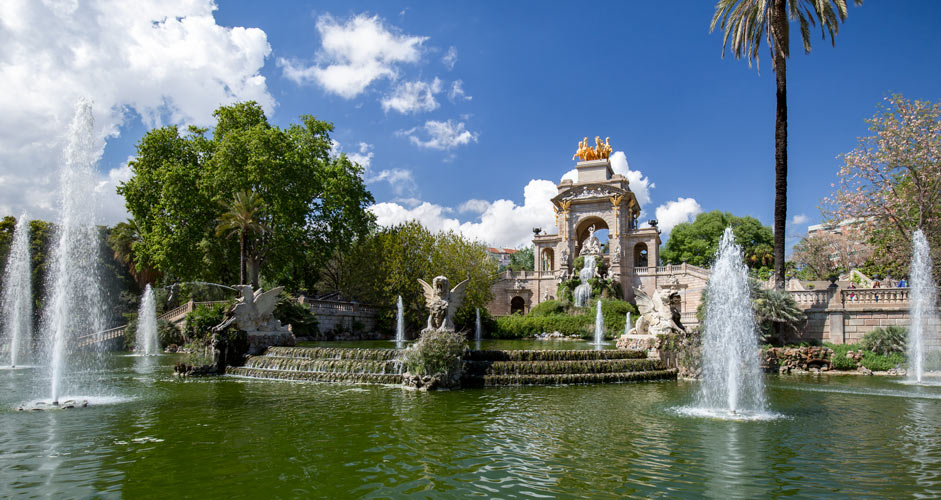 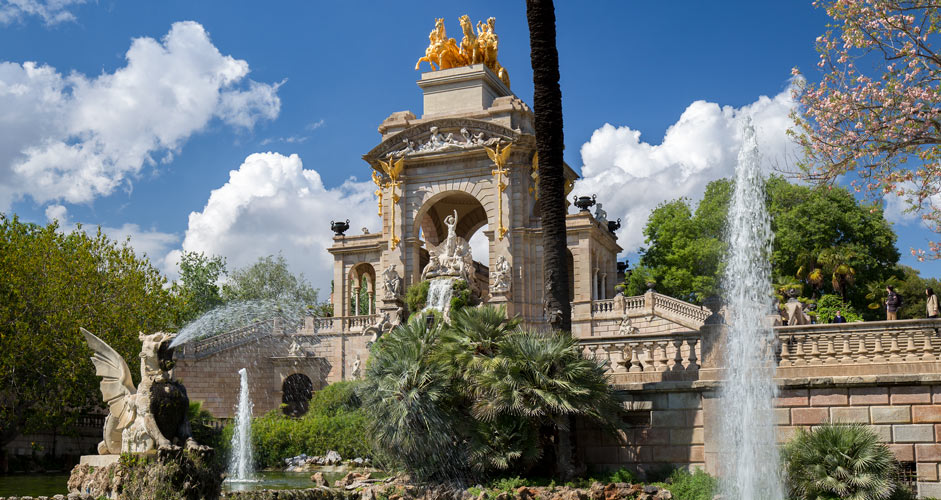 Parc de la Ciutadella is a cozy park right next to the city center, with the magnificent Cascada Monumental (or Cascada del Parc de la Ciutadella) on its northeast corner. You can also visit within the structure and take photos from different angles. 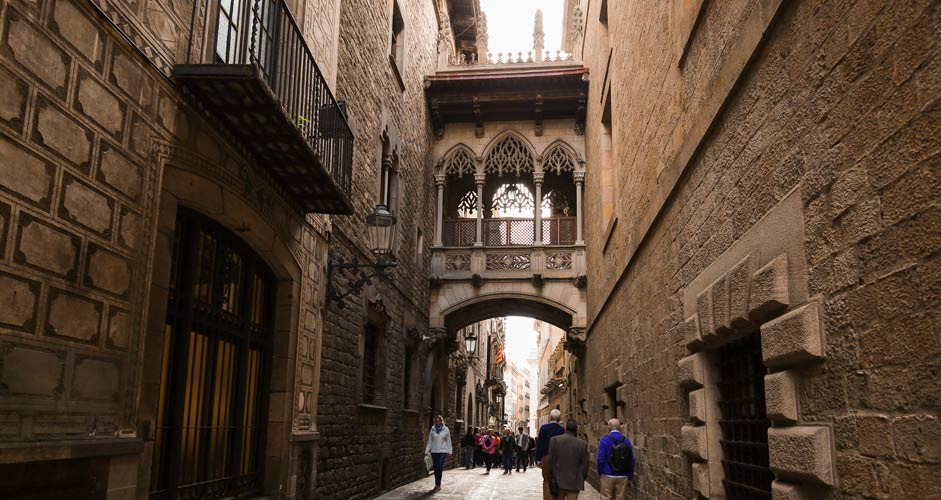 Carrer del Bisbe is a popular photo spot in Barcelona. 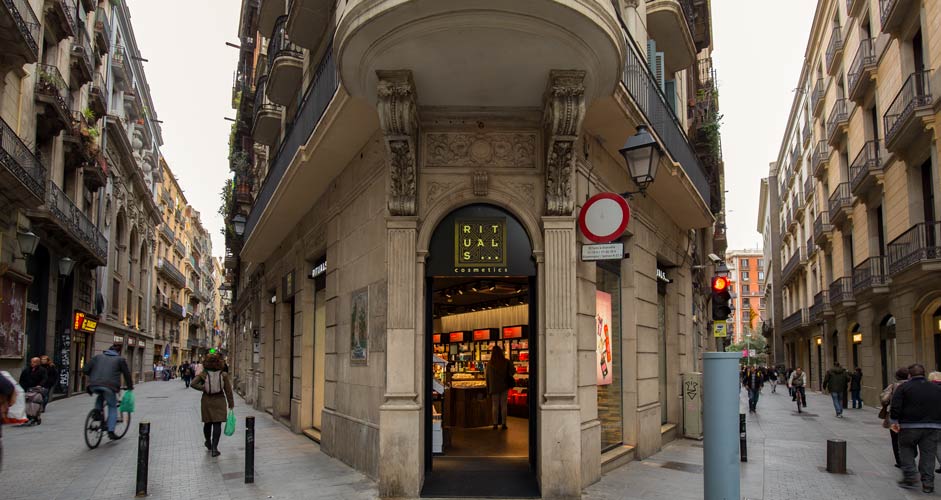 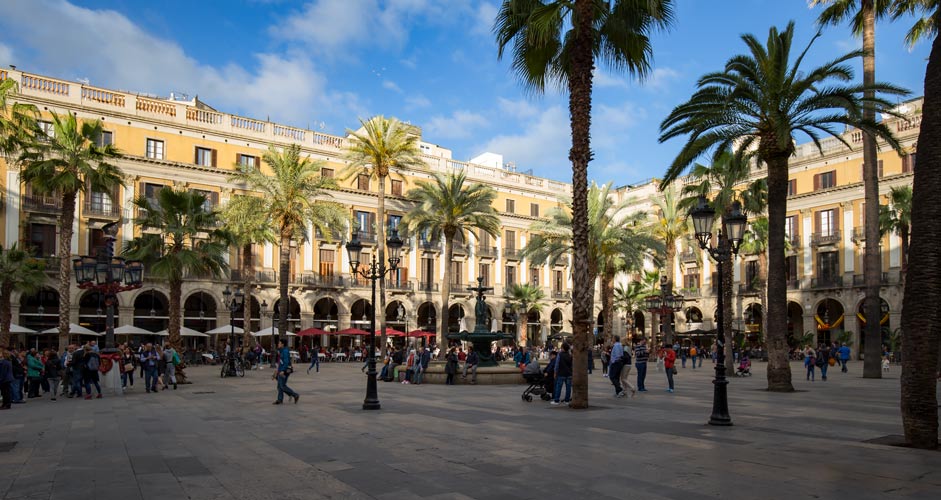 Barri Gotíc is the best-known district in Barcelona and one of the four districts of the Old Town (the others are Raval, Barceloneta, and a district consisting of three areas, Sant Pere, Santa Caterina i la Ribera).

Of these districts, Gotíc is the one with the most photogenic, picturesque little alleys and buildings. Barri Gotíc is surrounded to the east by Via Laietana, to the west by La Rambla, to the north by Catalonia Square, and to the south by the sea.

Gotíc mainly contains attractions, shops, restaurants, hotels and – especially in summer – countless tourists. If you are interested in a bit more authentic environment in the center, consider Sant Pere, Santa Caterina i la Ribera, east of Via Laietana, which has more local life and more colorful streets to explore. And why not also Raval on the other side of La Rambla. 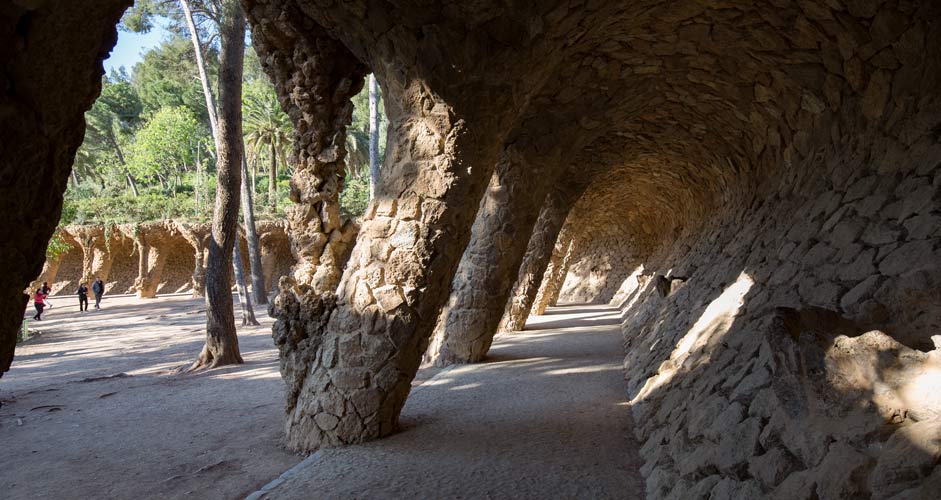 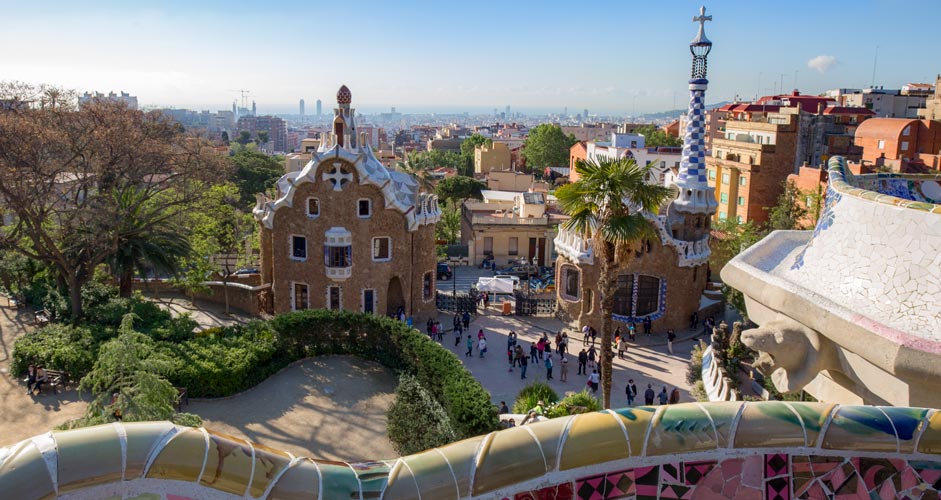 Parc Güell is an extensive park designed by Antoni Gaudí. While the park is packed with great backdrops to photograph, the most famous pictures originate from a paid area. To ensure access to this area, you should buy a ticket in advance.

The same theme continues in a larger area within the park, with free access. Hence, even without a ticket, Parc Güell is well worth a visit. 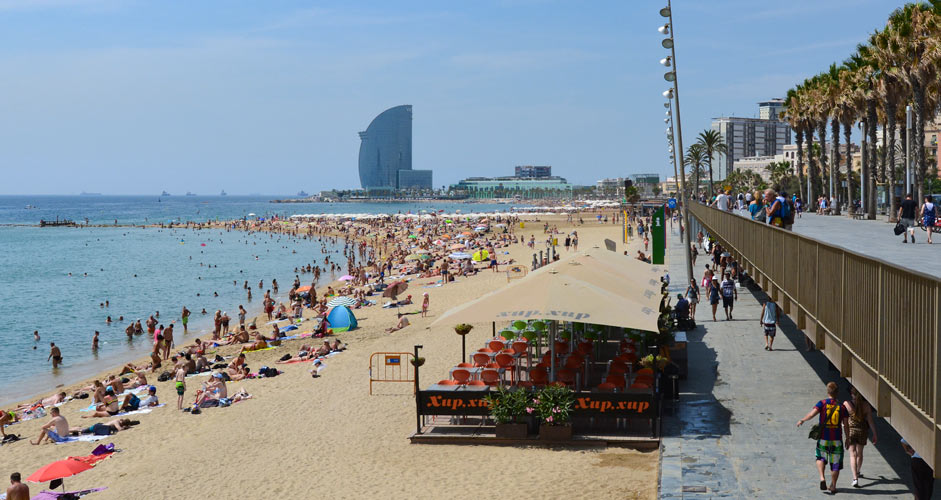 The beaches of Barcelona, with the exception of their southern end (Sant Sebastiá and part of Barceloneta), are followed closely by a pedestrian street well above the beaches. 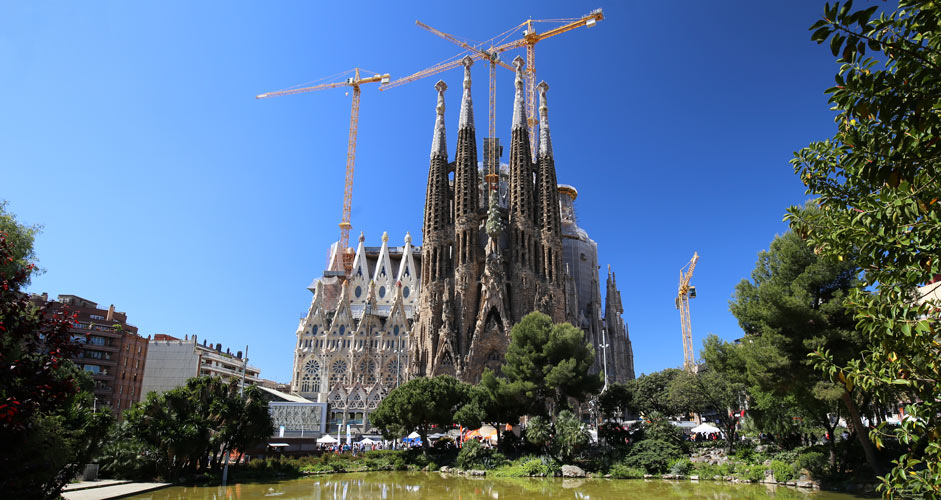 This still unfinished church, designed by Antoni Gaudí, seems to be the most famous attraction in Barcelona – and therefore needs no introduction.

There are buildings and trees blocking the view, and the only spot to get a clear overview (i.e. not the camera at the foot of the church, facing the sky) is from the adjacent park on the other side of the pond. On the other hand, there are plenty of fine details all around the church to photograph. 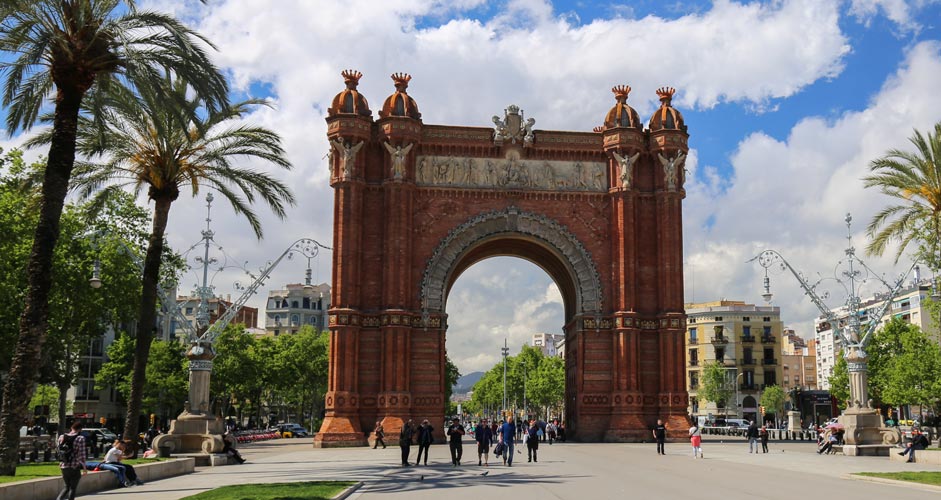 The Arc de Triomf was built to serve as the main gate for the 1888 World's Fair. The monument is located next to Ciutadella Park. 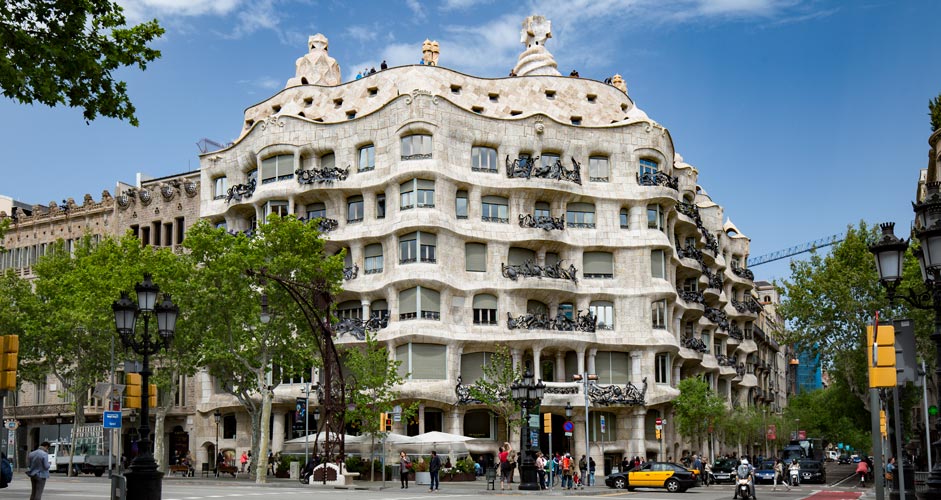 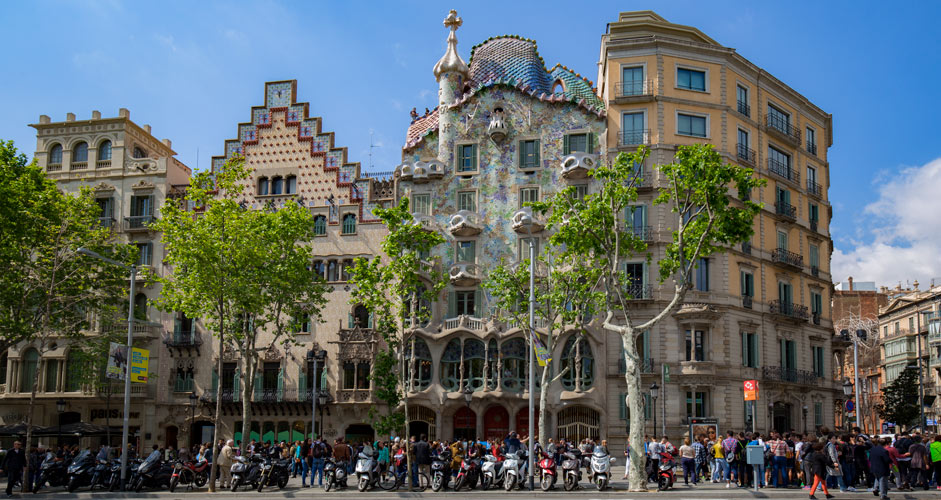 Passeig de Gracía, the main shopping street in Barcelona, begins at Plaça Catalunya and continues - while narrowing down, as the name suggests - all the way to the Gracía district. Along the street, there are two famous buildings, Casa Milá and Casa Batlló, both of which are among the most popular attractions in Barcelona. Both can also be entered inside for an entrance fee.