Home » Behind Our Travels » Sunrise spotting in Budapest 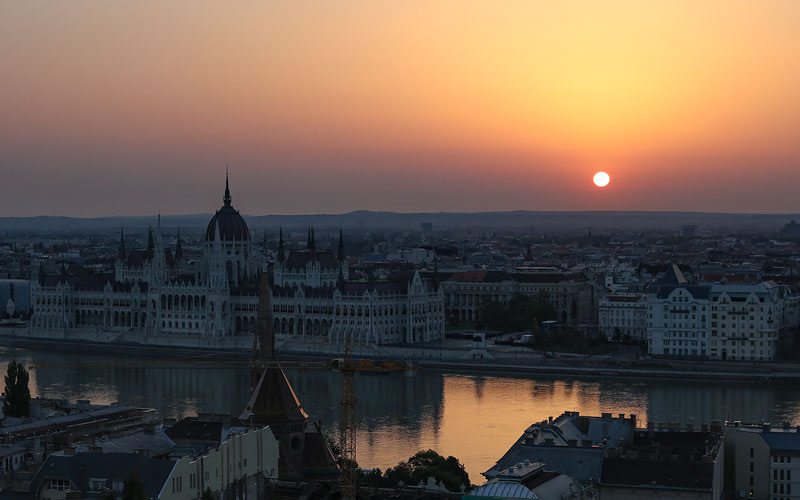 Watching the sunrise is typically not on anyone's list of the things to do in Budapest. It's not on my list either in the travel guide, although I mentioned it a couple of times. Let's take a look at the subject more closely in this blog post.

Watching the sunrise is always great, but Budapest is a special place for the purpose: As the sun ascends from Pest, the lower side of the city, Castle Hill and Gellert Hill on the Buda side offer great locations to enjoy the scenery right by the riverside.

Castle Hill contains a vantage point, the Fisherman’s Bastion from the early 20th century pointing directly to Pest. It is not an actual fortress – it’s just walls and towers that make it look like one.

If you manage to wake up before sunrise on your holiday, it comes with the bonus of being able to visit outdoor tourist attractions all by yourself, or among just a few people. I’ve climbed to Gellert Hill and Castle Hill a few times, and if you’re considering the same, check my tips below. 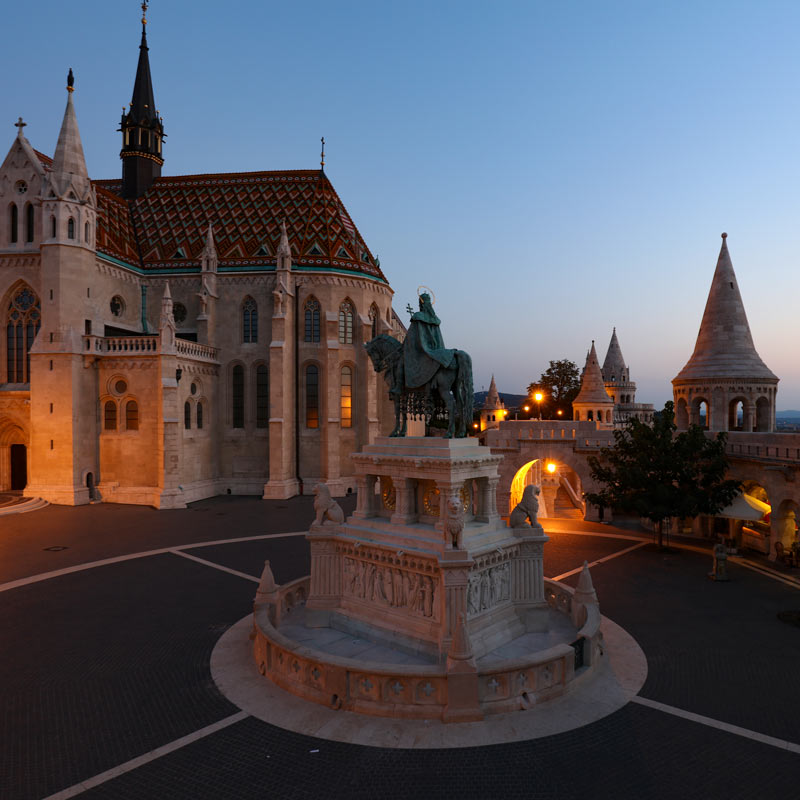 The typically congested Fisherman's Fortress is quiet before six o'clock in the morning. 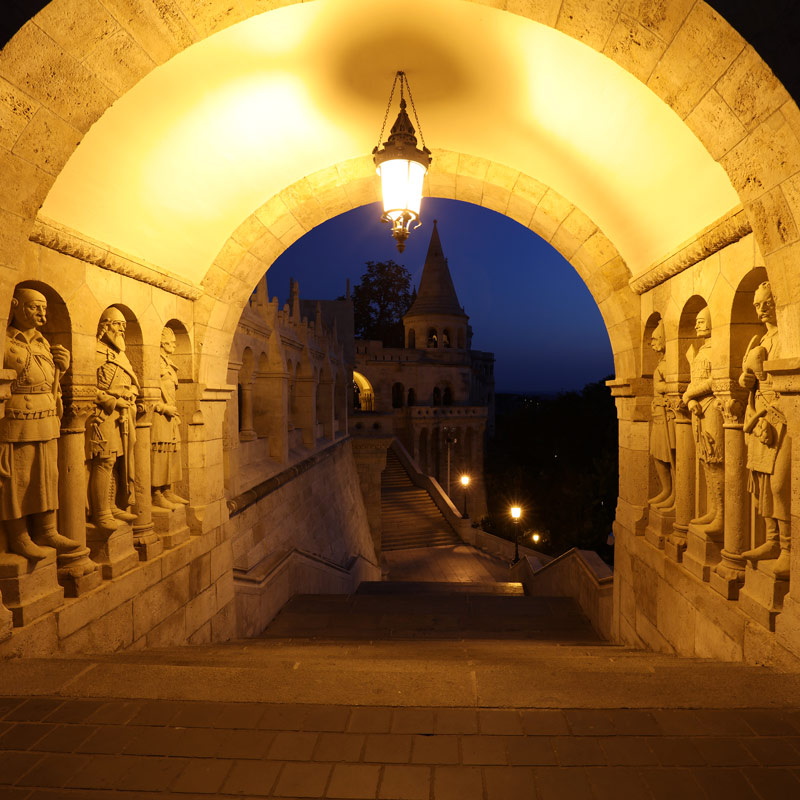 In Budapest, the sun rises between 5 and 6 a.m. Check the exact daily and monthly times here.

There are basically three well-known viewpoints on the Buda side: the Buda Castle and the Fisherman's bastion on Castle Hill, and Gellert Hill.

If I remember correctly, the gates of the Buda Castle used to open at 6 a.m., so you wouldn't be able to photograph the sunrise from there. However, based on a Google search, the castle seems be open overnight now. The courtyard of the castle is a public area with no entrance fees.

Whether the gates are open or not, you can walk to the upper end of the funicular anyway, as it is situated outside the gates. The picture below, with the Chain Bridge and St. Stephen's Basilica on the background, is taken from there. In fact, it is a better place to take pictures than the front of the castle anyway, so I don’t think it matters whether the gates are open or not. 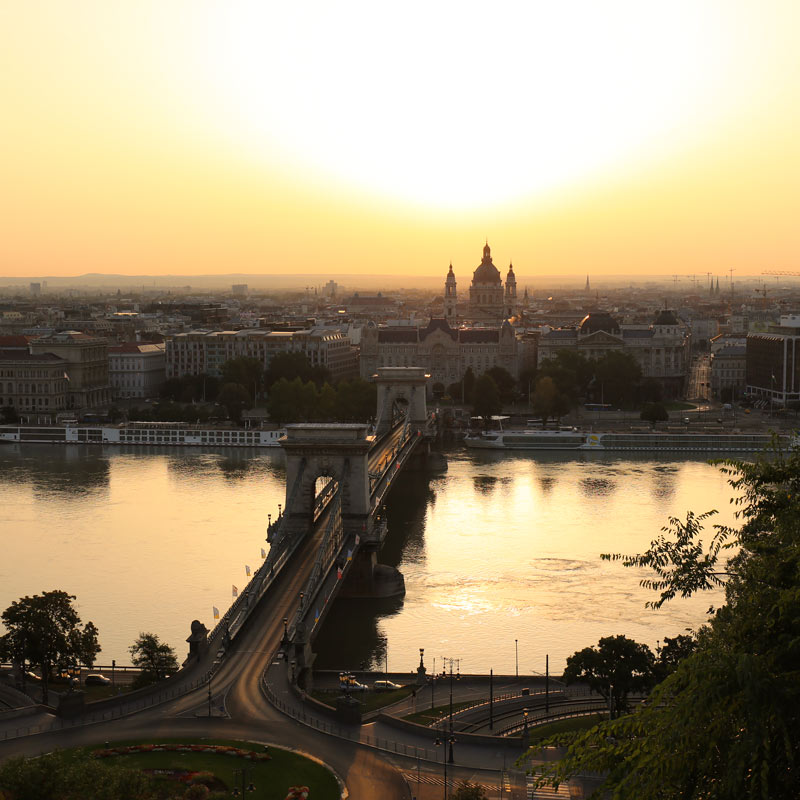 The Chain Bridge half an hour after sunrise. This would probably be a good place to photograph an actual sunrise as well.

It's nice to stroll around the castle area in peace and quiet after the sunrise. Bear in mind, however, that museums and other attractions only open a few hours later.

Another good place, even better than the Buda Castle, is the Fisherman's Bastion less than a kilometer away from the castle. They are both located at the top of Castle Hill, so the area between them is flat. Therefore it is easy to move from one to the other.

The wall and towers of the Fisherman's Bastion require an entrance fee during the day. In the morning, however, there's no-one collecting fees, and there are plenty of shooting locations to choose from. At least in summer, you can fit the famous Parliament House of Budapest to your sunrise photos. 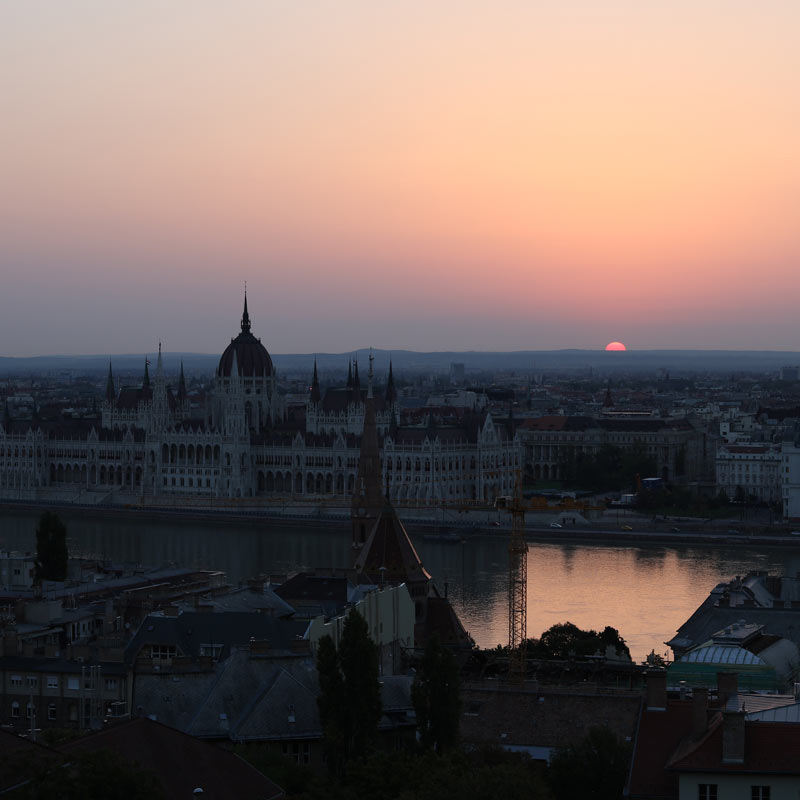 The Parliament House at 5.38 a.m. in early August. 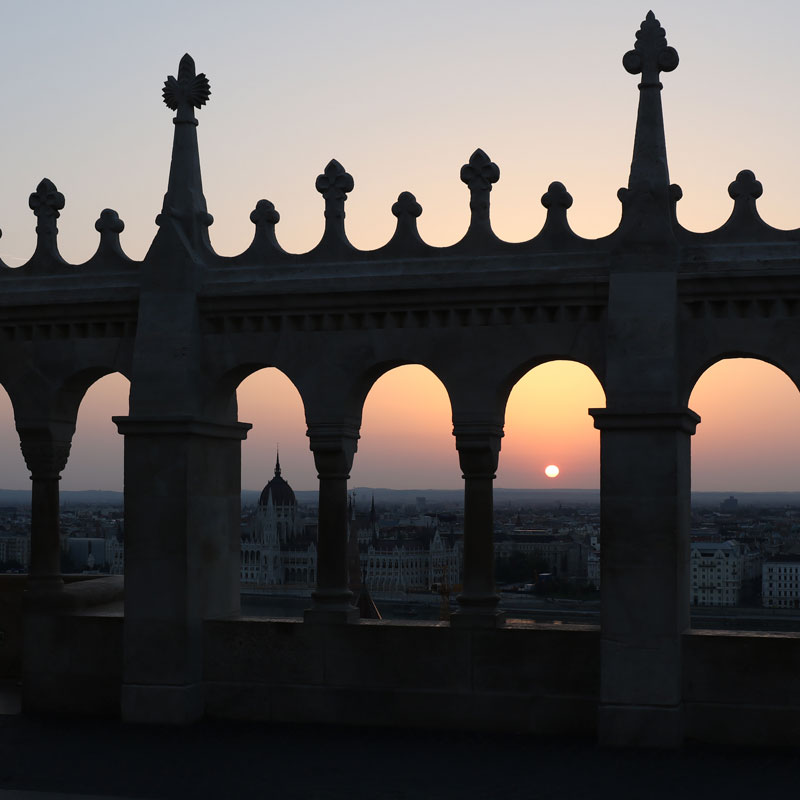 The bus takes you close to the bastion, as long as you aim at the Szentháromság tér stop. At least line 16 seems to be operating in mornings, from 4.23 a.m. onwards. You can also get there on foot via many routes, all of which obviously involve going uphill.

The adjacent Matthias Church opens at nine a.m. So, as was the case with the Buda Castle, the area can be explored freely with pretty much no one around. However, the attractions are not yet accessible at sunrise.

Since the streetlights are most probably switched off in early mornings, the wooded surrounding of Gellert Hill is a demanding area to catch the sunrise. If you're under way very early, you'll have to rely on the flashlight of your mobile phone to find the way to the top. Then again, the day begins to dawn about half an hour before sunrise, giving you enough time to get to the top with a little bit of daylight. 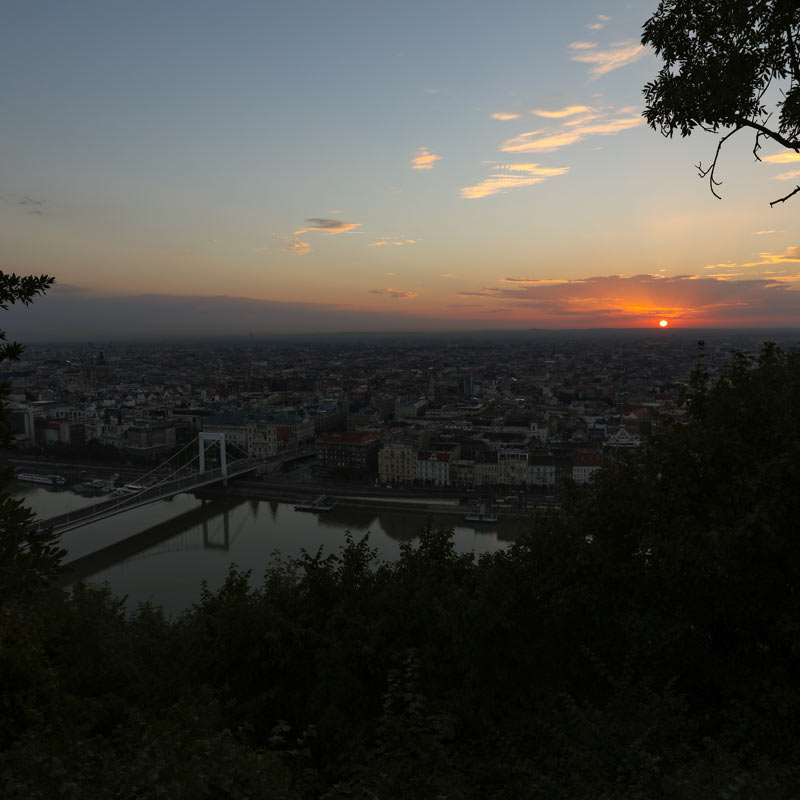 There are some vantage points up the hill. Trees interfere somewhat when taking pictures unless you're on a vantage point. So, it might be a good idea to stay in one of the vantage points along the way. At least on the southern side of the hill, there are a few. The picture below is taken from one of them, as I overslept once in April and didn’t have time to get to the top in time. It might have been a good thing. 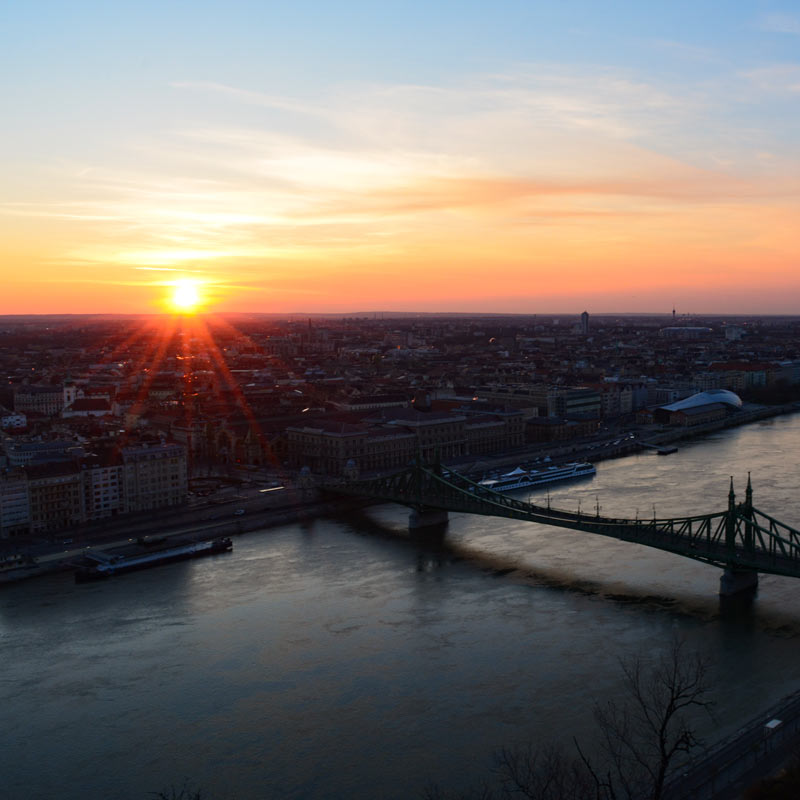 6.22 a.m. in early April. The Liberty bridge in the foreground.

Bus 27 drives near the top of Gellert Hill, but only from 5:10 a.m. onwards. So, at least in mid-summer, you won't make it there by bus before sunrise.

Due to the closure of the Citadel, Gellert Hill doesn't really have any attractions – unless you consider the cave church at the foot of the hill as one. So, early mornings are great for exploring the hill, its parks, and statues. The view is probably the nicest thing there, though. During the day and evening, it is pretty crowded at the top. 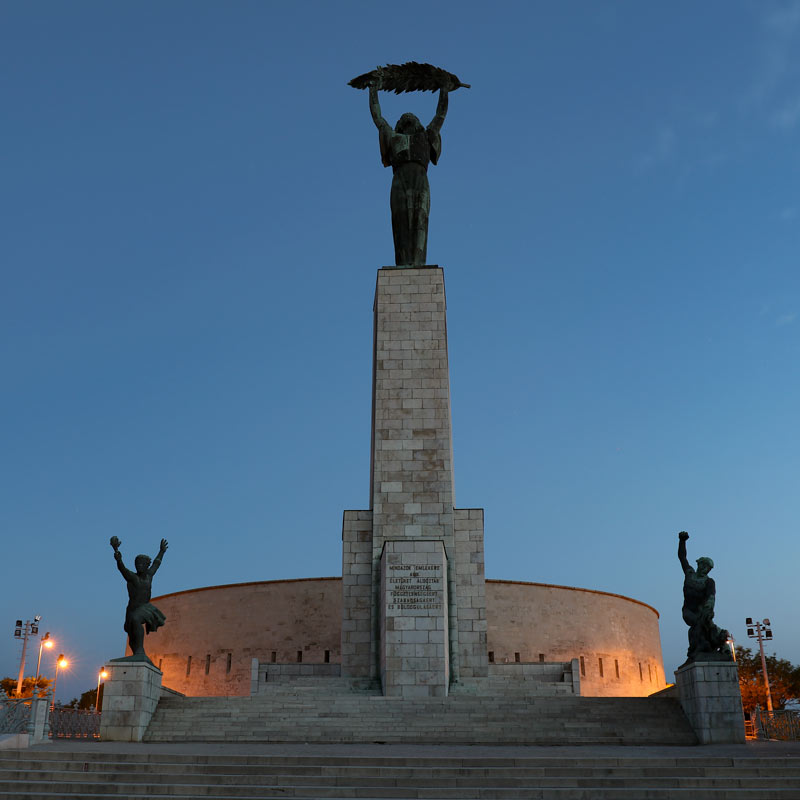 Statue of Liberty at the top of the Gellert Hill.

It is recommended to head up via the side of the cave church, as the view of the river and Pest is better, and the above-mentioned viewpoints are included along the way. If you return back down via other routes, the roads are more gradual, and there are fewer stairs along the way. It is not possible to get up directly via the front face of the hill - only via the sides or behind. 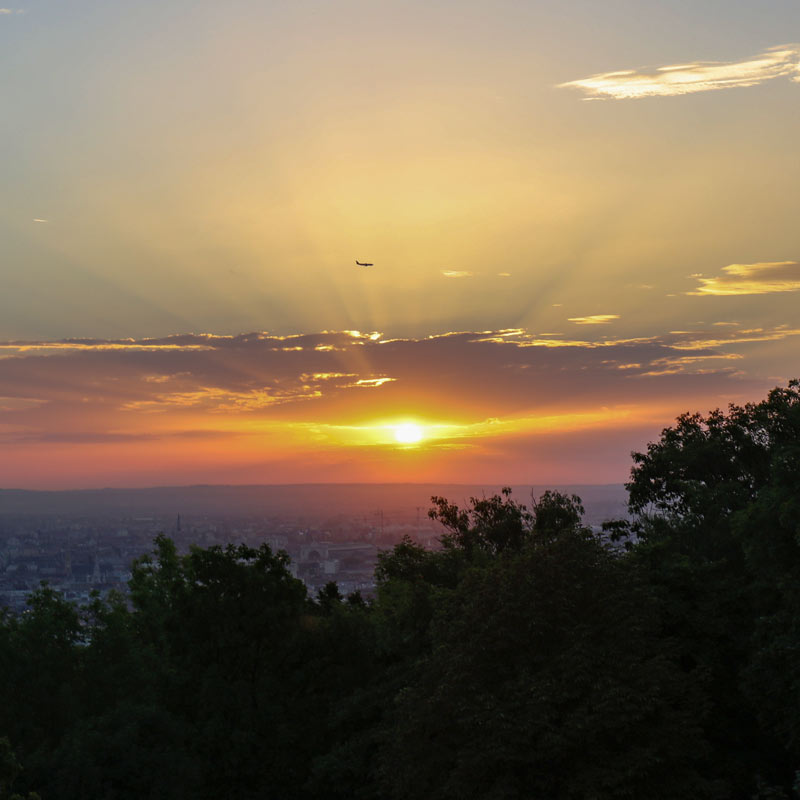 A nice time to head down to the city. 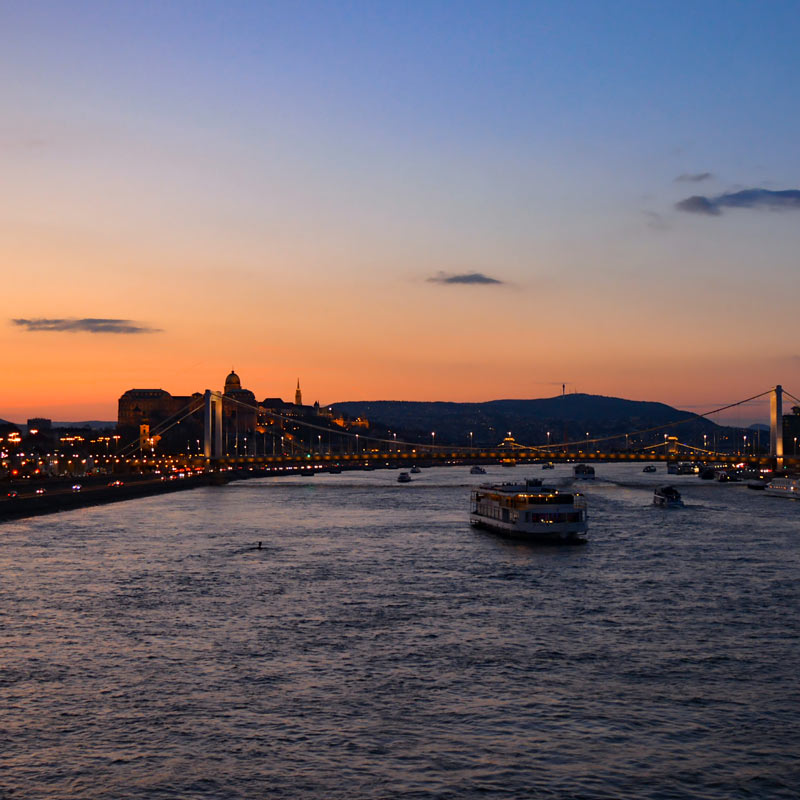 A sunset view from the Liberty Bridge towards the Castle Hill.