On a Bike Ride on the Island of Gozo 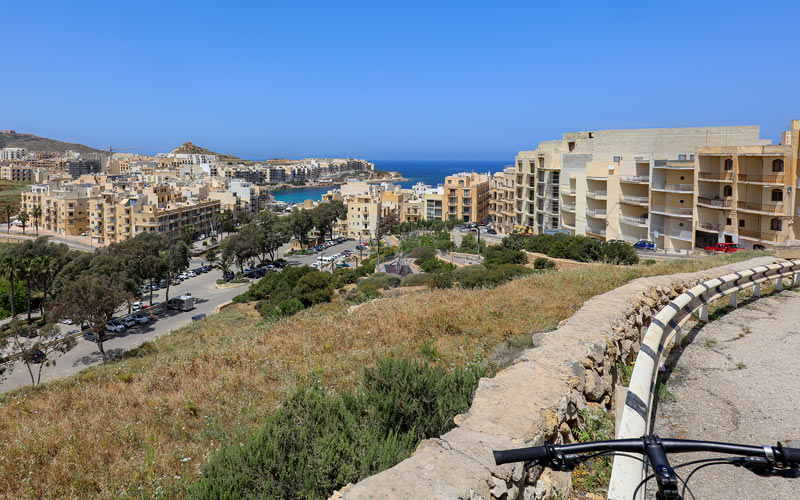 Gozo is a small island with various interesting locations just a few kilometers apart from each other, which makes the island great for biking. However, in midsummer, cycling is not desirable due to the heat and elevations. There are no cycle paths, but there are no traffic jams on the asphalt roads, either. There are sidewalks along major roads. 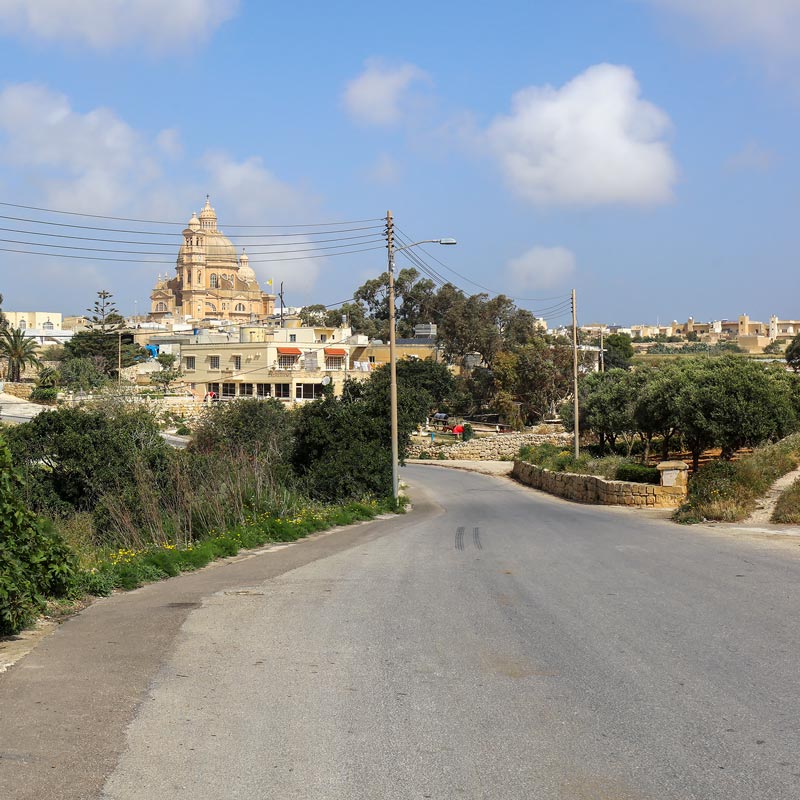 A typical road and a landscape in Gozo.

I was on Gozo in the spring of 2018, with no prior knowledge of the place. I had been to Valletta before, but hadn’t paid any attention to Gozo at the time. However, now that I had booked a two-week trip to Malta, it seemed natural to visit the smaller island as well. I even booked an Airbnb apartment blindly next to the harbor, which turned out to be a pretty good idea. In fact, it turned out that the location of your accommodation is irrelevant in Gozo, because everything is so close anyway.

I decided to explore the island by bike. My Airbnb host suggested a scooter, and had I been there in the midsummer heat, it would certainly have been a better option. But since it was only April and the temperatures stayed under 20 degrees, I ended up choosing the bike.

I met my host once as I was cycling down the street, and told him that one of the reasons for choosing the bike was to get some exercise, thus, to support my diet following the winter. So, having opened the discussion with "Besides, I need the exercise", the guy glanced at my belly and replied laconically, "Yeah, you do." Well, I appreciate his honesty!

I divided the island tour into two days: the west coast on the first day and the east coast on the second. In addition, I spent two days in the capital, Victoria, and the neighboring island of Comino.

On Gozo, the difference in the altitudes between the center and the coast of the island is significant. The coastal destinations are usually at the end of a just one road, which typically go downhill when approaching, and uphill when coming back. The uphill sections feel like they never end. For example, the ascent from the San Lawrenz beach back to the village is 1.6 km of pretty steep uphill. And yes, I pushed my bike all the way. At times, the roads are so steep that just pushing your bike is difficult. 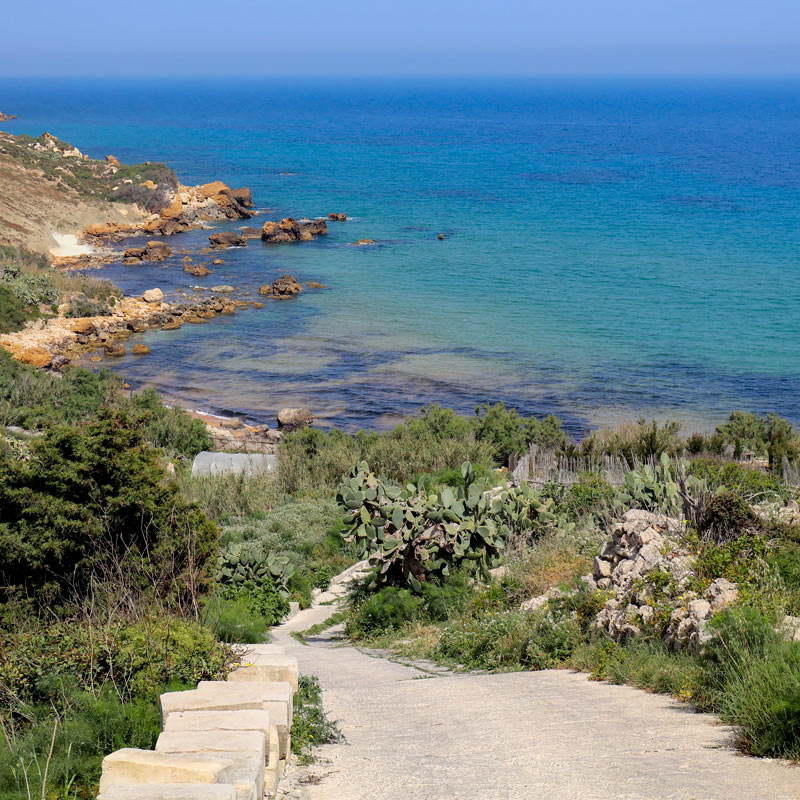 Hills can be really steep at times.

I wouldn't move around the island without a motorized vehicle in June, July and August, and there are many different types available to rent right at the port. I rented my own bike from here.

San Lawrenz is actually a village a little higher up, but it is known for its coastal attractions. The most famous of them, the Azure Window or the Blue Window, collapsed in 2017, and the place hasn't been the same since then. However, if you're staying for several days in Gozo, you should pay a visit there. On a day trip, I would skip it. 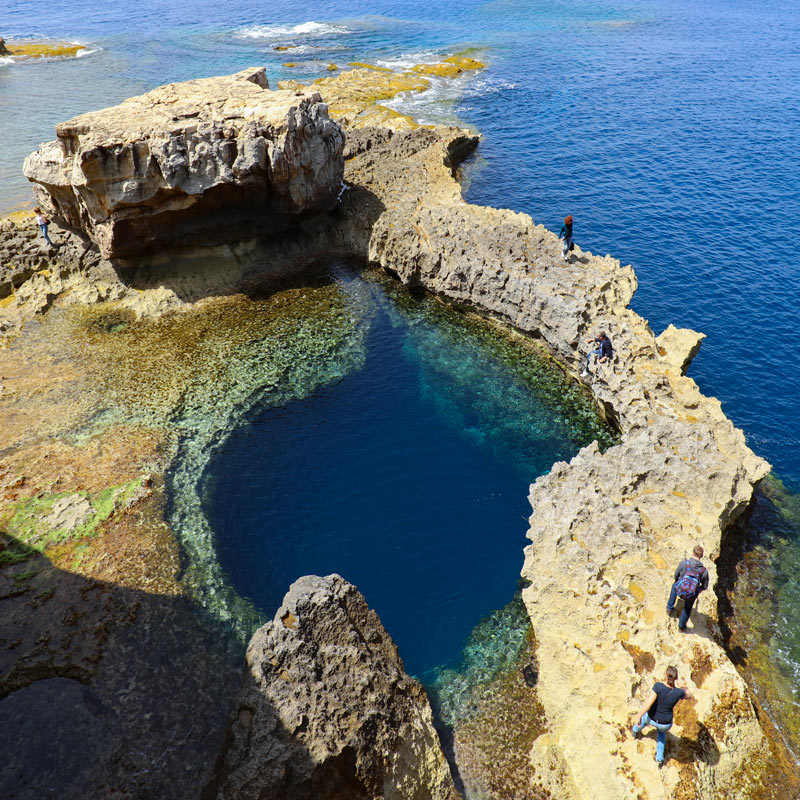 The blue hole in San Lawrenz. 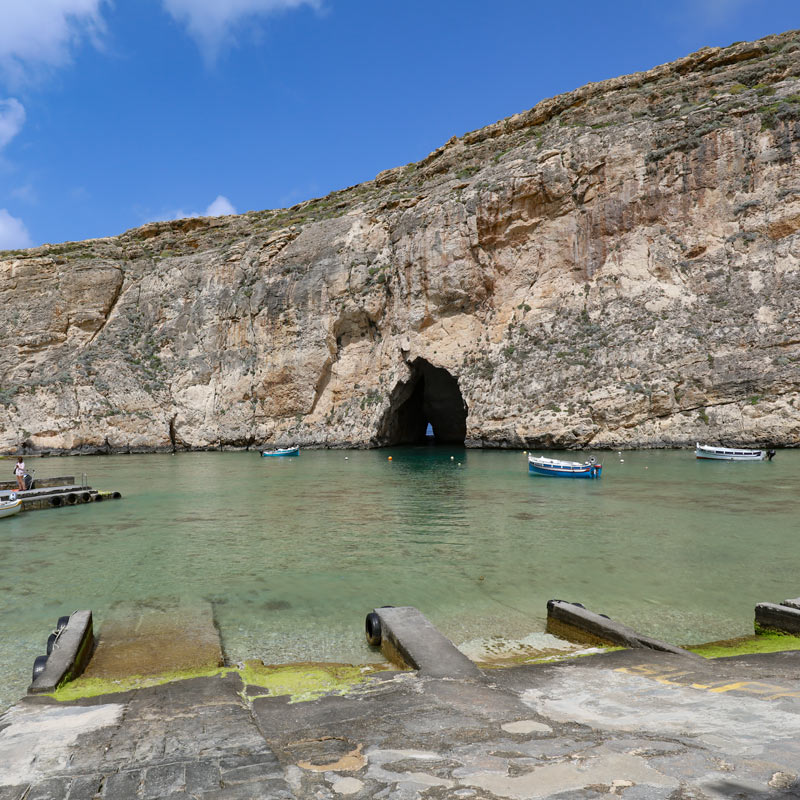 The inland lake with seawater provides easy access to the sea. 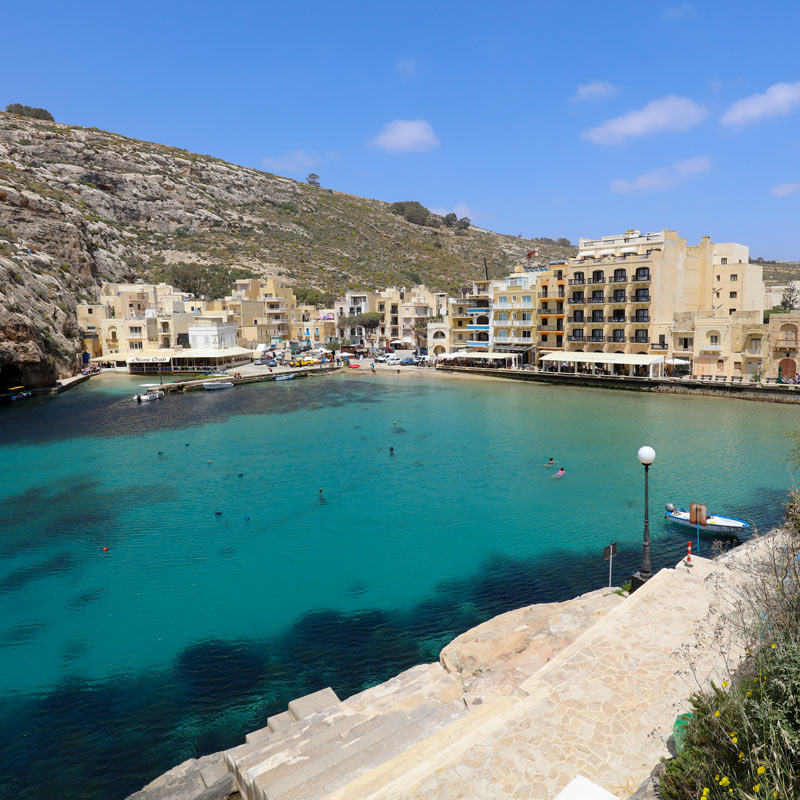 If I ever get a nervous breakdown and the medics have to take me somewhere to rest, please take me here! I don’t know what Xlendi looks like in July-August, but in April, the atmosphere at the end of the long, beautiful bay is perfectly calm, if not drowsy. Long lunches, swimming trips along the bay and lying in the sun – that's pretty much all there is to Xlendi, and nothing else is needed.

This long bay was very similar Xlendi Bay, but with almost no services. I arrived to Mgarr ix-Xini right before evening, with very little sunlight left. Therefore, I didn't get to enjoy the bay to the fullest. 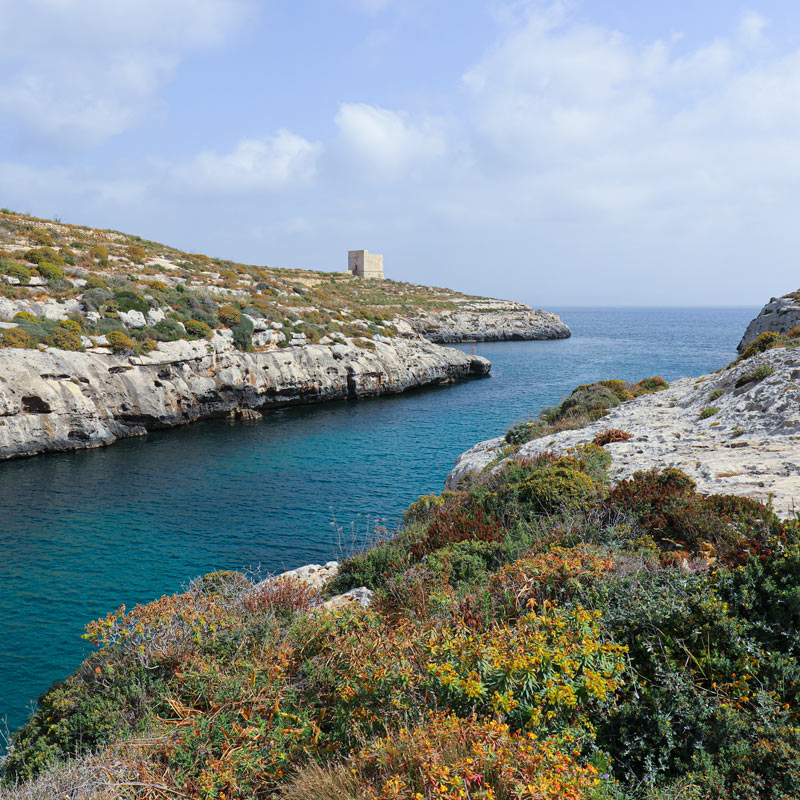 The film, By the Sea, by Angelina Jolie and Brad Pitt was filmed here. If I remember correctly, Brad Pitt acted an alcoholic writer, who used to sit at a beach bar (which doesn’t really exist) during days, and then to hobble back to the hotel (which is not really here) in the evenings. I guess that must have been some kind of treatment for a nervous breakdown, too.

The surroundings looked great in the film, and as the place was familiar, it was nice watching it afterwards. Then again, allegedly, the events of the film took place in France. Maybe the mental image of France was believed to sell better than that of Gozo, which hardly anyone has heard of in the USA. In fact, most have probably not heard of Malta either.

The capital of Gozo is reminiscent of the oldest cities on the main island. The nicest thing there is the Cittadella, a fortress built on the highest point of Gozo. 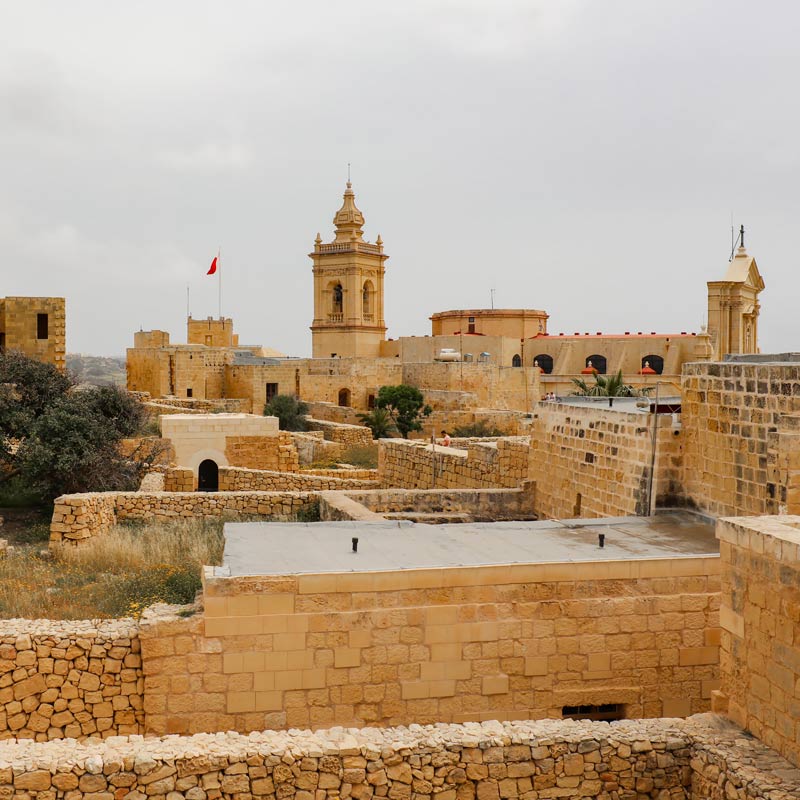 Roofs of the Cittadella.

If I had to name the two best things on the island, they would be the aforementioned Xlendi Bay and the Cittadella in Victoria.

Marsalforn is a more tourist-like destination and bigger than Xlendi, but not very large either. There were fine cliffs for sunbathing on the southside of Marsalforn. 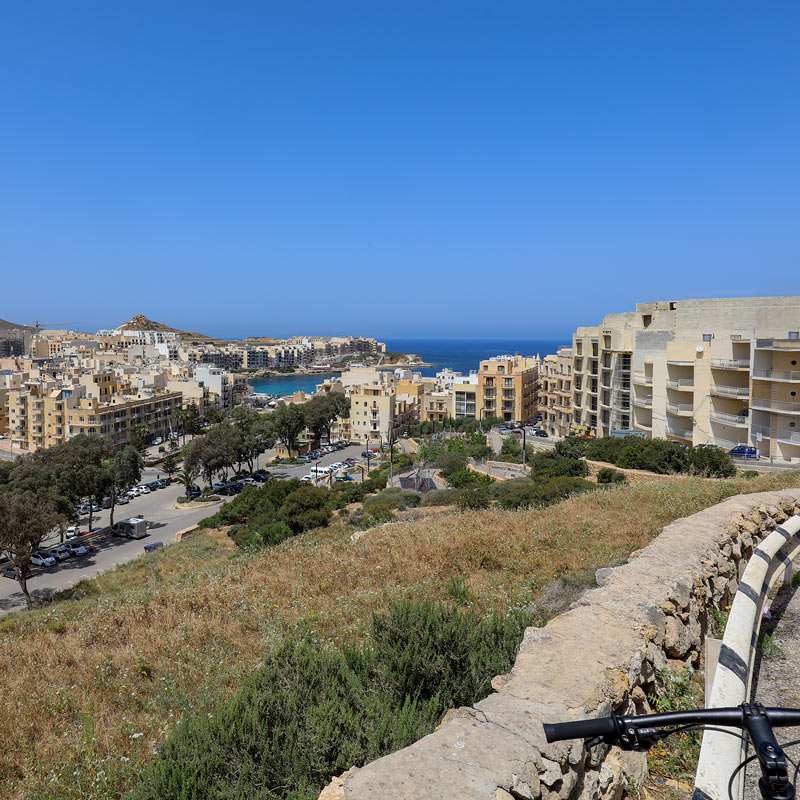 Marsalforn is shown below and my bike next to me.

I continued cycling a bit further northward to the salt pans, one of Gozo’s most famous attractions. They look great, too, but there’s nothing mind-blowing to them. 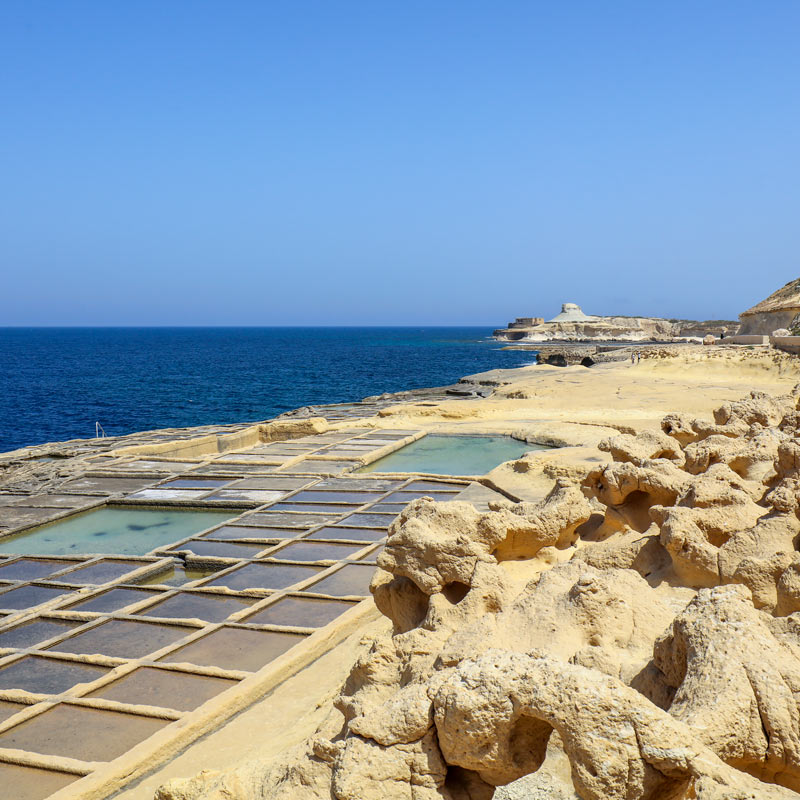 Too bad, I didn’t go any further, as I would have encountered the Wied il-Ghasr gorge (at the northern end of the island). I couldn't be bothered to check the map on my phone, and turned back just a 5-10-minute bike ride away from there. Well, at least there's something new left to see for the next trip. 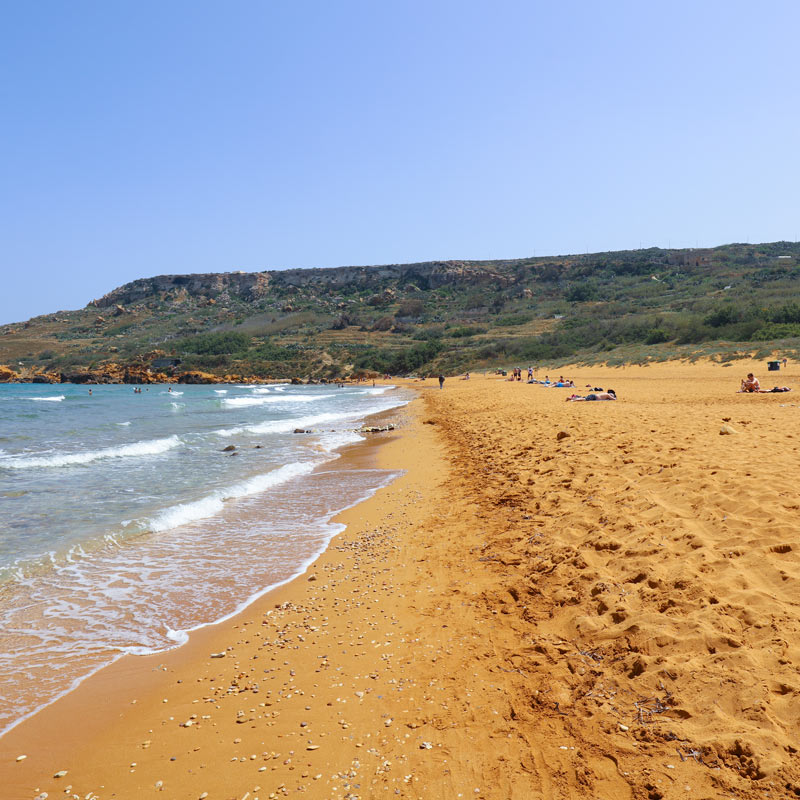 While there’s Golden Bay beach in the main island, Ramla Bay is actually more reminiscent of one.

I stayed in Ghajnsielem, which is a quiet village next to the port of Mgarr. At least in April, there were almost no tourists around.

I found a decent grocery store and a couple of restaurants close by. And about a hundred churches – there are churches everywhere in Gozo. Next time, I’ll at least take a look at the accommodation options of Victoria, because after all, it’s right in the middle of everything. Although Ghajnsielem is a good option as well. 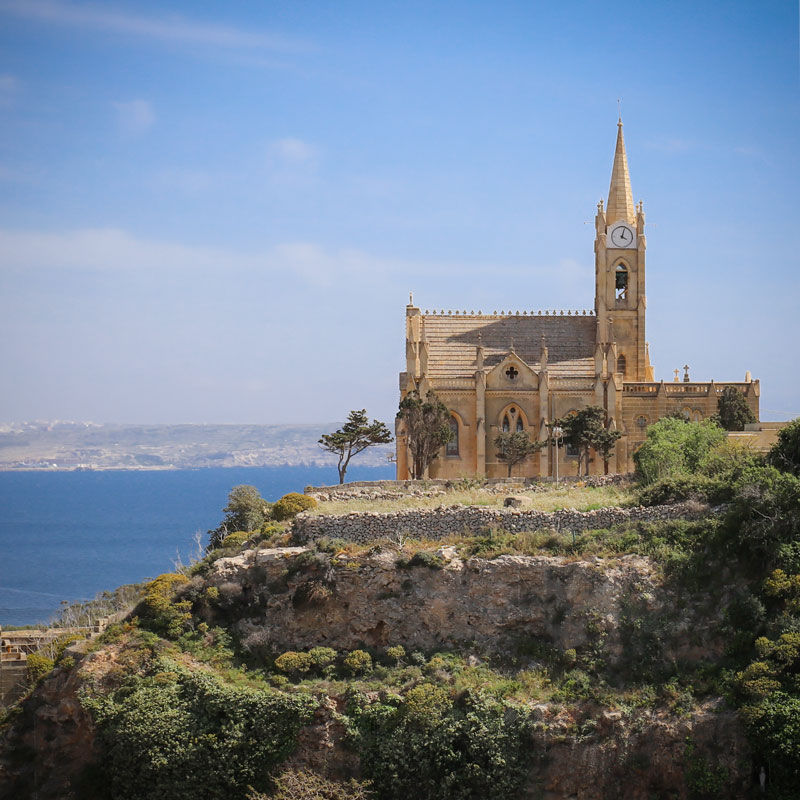 Church on a hill next to the port of Mgarr.

Assessment of Gozo: Gozo is a destination I would definitely return to again. Next time, however, I prefer to visit there in September-October, as the worst heat is over, it's a good time for swimming and there are fewer tourists than in midsummer. After all, Gozo is about enjoying the peace and quiet.